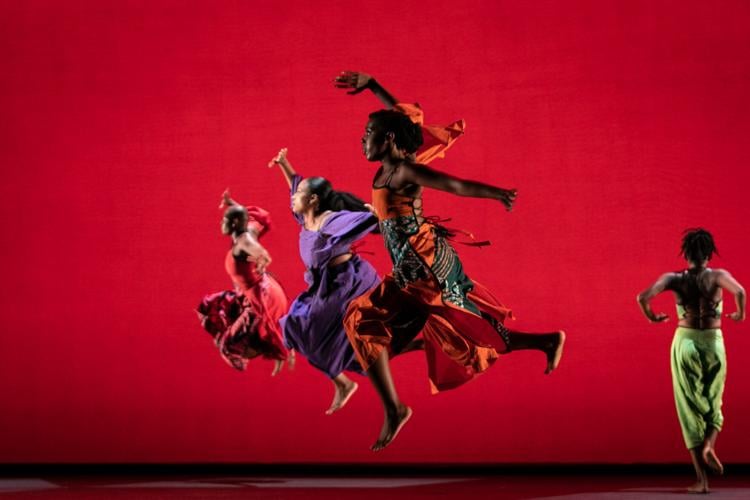 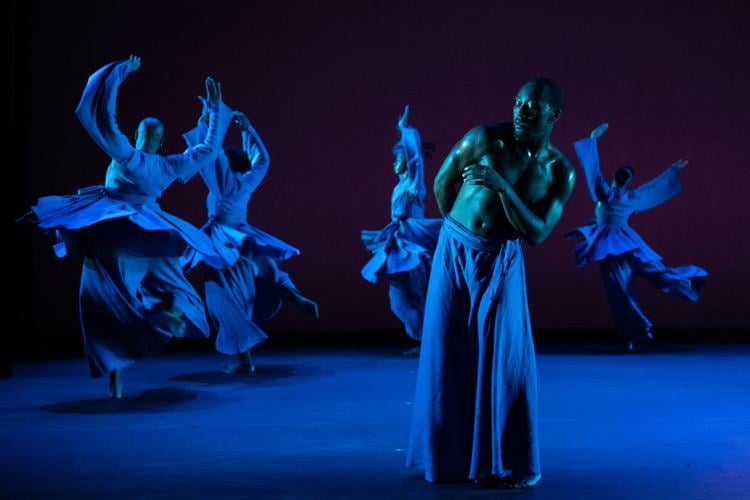 Demetrius Burns in Ronald K. Brown/EVIDENCE "The Equality of Night and Day."

BECKET — It was double the pleasure to see the dancer and choreographer Ronald K. Brown walk onto the Ted Shawn Theatre stage on Wednesday evening. In 2020 Brown was awarded the annual Jacob’s Pillow Dance award, but rather than being feted, as the award’s recipients usually are, on the Shawn stage in front of a live audience, the honor was bestowed virtually.

A pandemic-era party was better than nothing, but now we have something, something extra special, because Brown did, in fact, walk onto the stage (albeit while leaning slightly on a cane and slightly into his partner, Arcell Cabuag); in 2021, he suffered a debilitating stroke and has been on an arduous journey of rehabilitation since. This walking onto the stage is moving, momentous, but I can’t wait to see Brown, a singularly fluid mover, dancing again.

When: Through Sunday, July 3.

For now, we still have the pleasure of seeing Brown’s dances, and his dancers. One of the most magical aspects of his company, EVIDENCE, is that although all of its dancers embody Brown’s choreography — composed of traditional African dance vocabulary accented with a contemporary/modern vernacular — as if each were born to it, none move exactly like him. Instead, they dance like individuals: The choreography is thus given its fullest expression because the dancers move in their truest physical voices.

In this week’s Pillow Festival program, the EVIDENCE triple bill opens with the long-awaited full premiere of “The Equality of Night and Day.” It’s a quietly stunning work of art, set to an original composition performed live by pianist and composer Jason Moran, and to recordings of excerpted speeches by the social activist Angela Davis. There are also images depicting historic moments of social protest, past and present, curated by Deborah Willis, projected onto fabric banners hanging above downstage.

Brown, channeling Davis, points to the brutal inequalities against Black and queer communities that persist, and to the frustration and the rage, but always comes back to a place of (as Pillow associate curator Ali Rosa-Salas noted in her pre-show welcome) truth, peace and solidarity. And love. But Brown isn’t tiptoeing around the brutality; rather he counters the ugliness with beauty.

There is often a sense of ritual in the staging, particularly in the stately-somber opening movement; when the dancers enter, they are at once stealthy and steely, lifting a knee high up but then sliding through a deep plié. Though their handsome costumes, by Omotayo Wunmi Olaiya, suggest something entirely different toward the end of the piece, at first the belted, flowing tunics over wide-legged, billowing pants conjure Buddhists’ robes. Here, Moran’s score is spare, delicate, while the dancers alternate between canonic variations on brief-but-lush movement phrases, and simple processionals in which the group encircles one dancer protectively, or flanks one or more dancers, watchful, waiting.

Jacob's Pillow has a lot to celebrate this summer.

On the heels of its June 11 ribbon-cutting, celebrating the reopening of the renovated Ted Shawn Theatre — its flagship performance space — is its 90th anniversary season, one that also marks a return to indoor performances after two years of outdoor-only spaces.

Edwards’ epic limbs don’t just cut through space but seem to move the very atmosphere; she is one of the most calmly commanding dancers I’ve seen, and is perfectly cast here as a kind of seer/leader. Burns is by turns expansive and vulnerable; after taking off his tunic (which now, following Davis’ recitation of the demoralizing statistics of incarceration rates among young Black men, suggests prison garb), his torso is either strong, warrior-like, or curved over, as if collapsing with exhaustion.

Indeed, amidst Brown’s choreographic poetry are harrowing, piercing moments. A motif in which the dancers’ hands, held out to their sides or in front of their faces, shake, is rife with anxiety; later, at the end of a men’s group phrase, they howl behind those mask-hands, the rage, the grief is shocking, palpable. Inevitable. But Brown eases us down from this mountain of grief, always hopeful, with a cathartic, metaphoric ending in which all of the dancers have taken off their tunics and placed them in a pile in the center.

The other two works on the program, “Upside Down” (an excerpt from the 1998 dance “Destiny”) and the 1999 “Gatekeepers” feel like companion pieces, dynamically and thematically. Though there is context embedded within—especially in “Gatekeepers,” whose title refers not to the contemporary phrase denoting those who imperiously “decide” who can participate, but rather to beautiful myths and traditions from some Native American and African communities — these dances are exuberant examples of some of EVIDENCE’s infectiously high-octane repertory.

How can an experience be so intense and at the same time so easy? Yet that’s what an EVIDENCE performance often offers, and that’s what this program delivers. Throughout the evening I was struck by the seemingly ceaseless rise of energy, wondering how it could be maintained. But even in the moments of pause or stillness, the dancers continued to emit radiant strength; their commitment to the dance, to the art, to Brown, to each other, to us, is formidable and precious. Breathtaking and life-sustaining and hopeful.

DANCE REVIEW: ‘America(na) to Me’ is a ‘playful and provocative’ response to Ted Shawn’s idea of American identity

A version of this review originally appeared in The Boston Globe. Janine Parker can be reached at parkerzab@gmail.com.

Matthew Neenan’s 2018 dance “A Million Voices” opens the triple bill performed by the Los Angeles-based BODYTRAFFIC at Jacob’s Pillow Dance Festival this week, reminding us instantly of how terrific this contemporary dance company is.