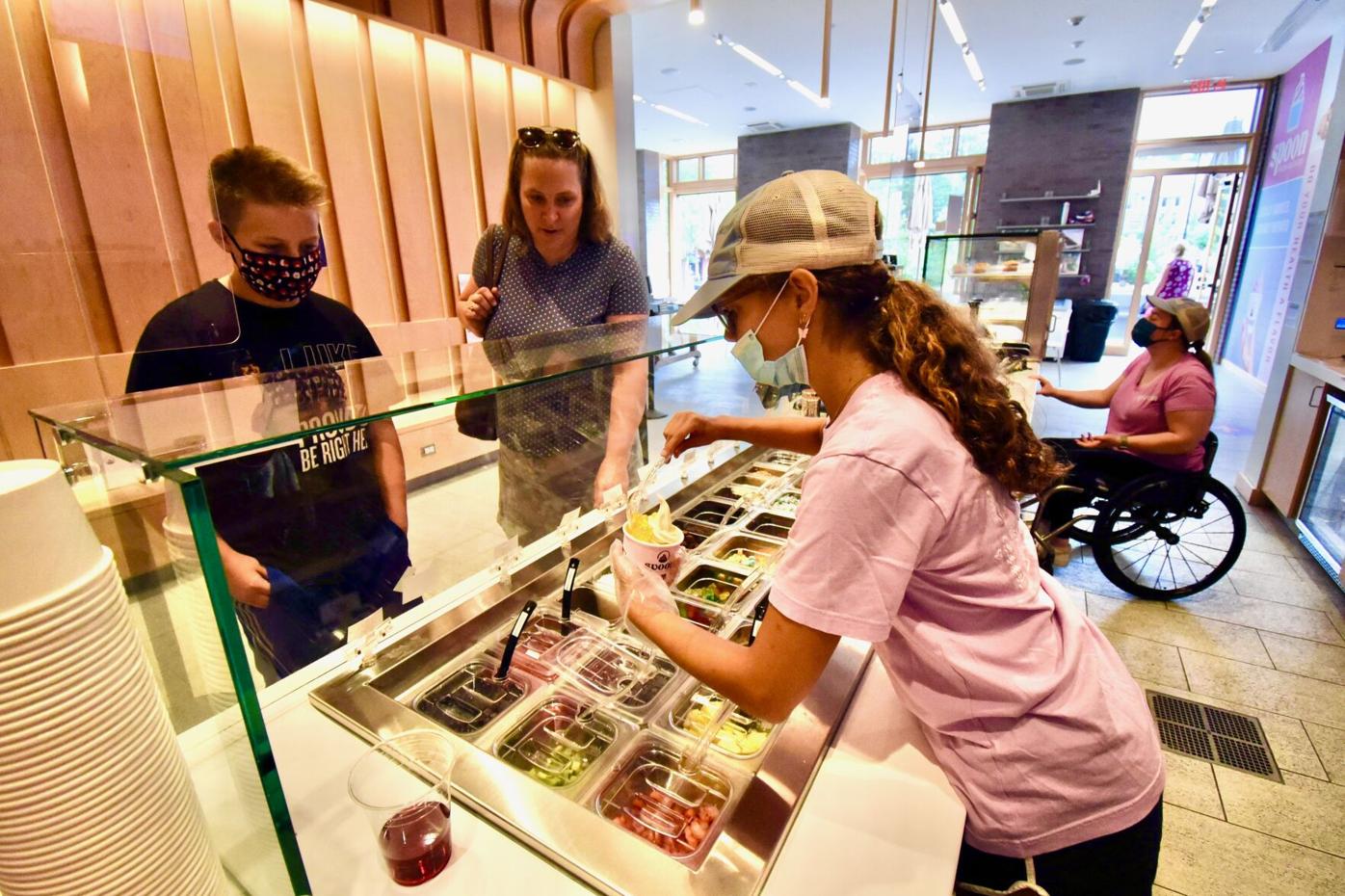 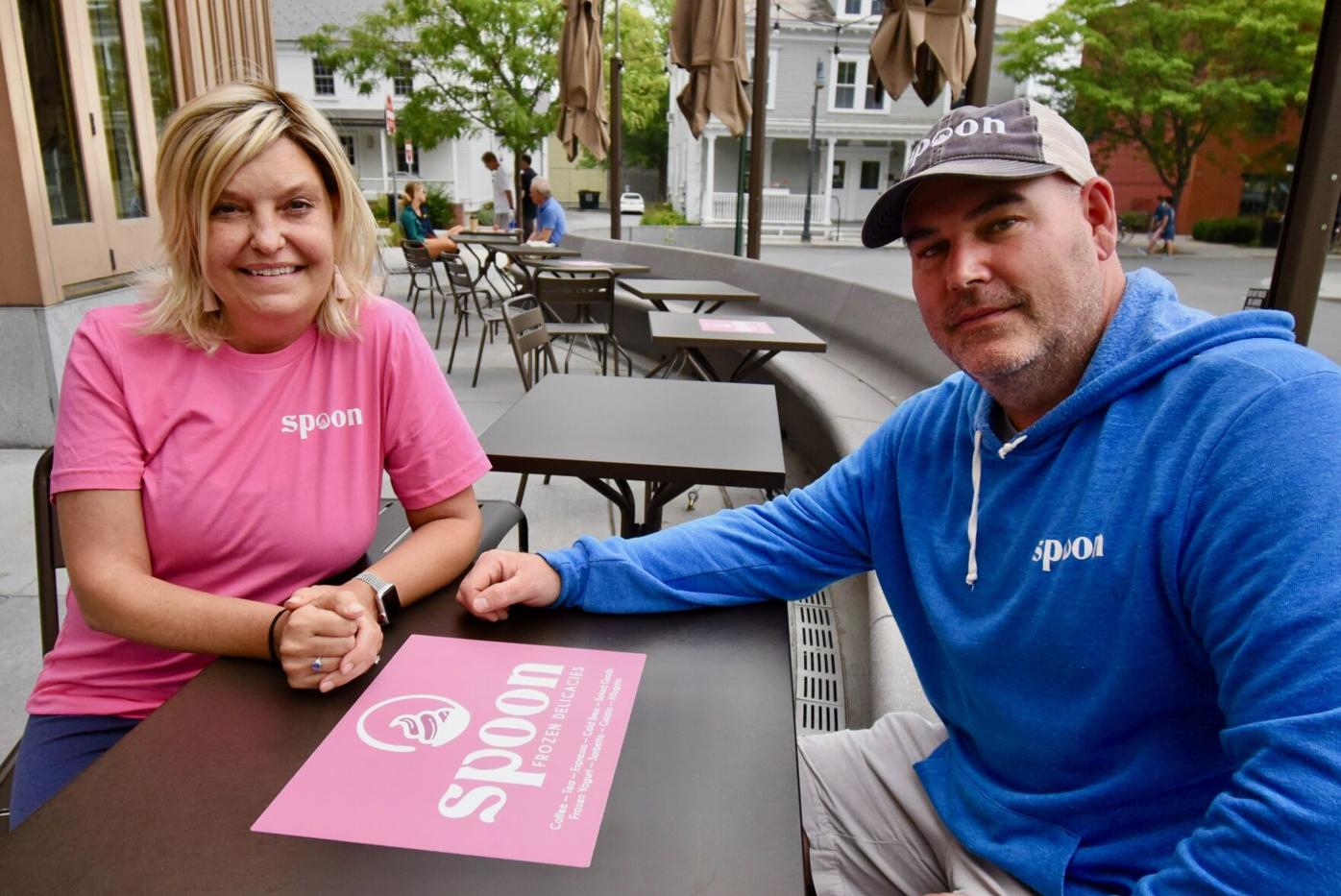 David and Colleen Little, owners of Spoon Cafe  in Williamstown.

WILLIAMSTOWN — Handily tucked into a corner on the ground floor of the Williams College Bookstore, Spoon Café offers frozen yogurt treats and lots of healthy toppings.

Slightly more than a year after opening, the business is still growing, as owners David and Colleen Little and their staff serve up bowls of traditional and “artisan crafted” froyo to a good mix of clientele, including local residents, tourists and college students.

What: Offering four varieties of frozen yogurt and toppings (varies by week) and baked goods.

Where: 81 Spring St., Williamstown (on the ground floor of the Williams College Bookstore).

The husband-and-wife team started the business as a way to relieve the day-to-day stress of their professional careers. Colleen Little is special assistant to the vice president for the Office of College Relations/Director of Principal Giving Strategy at Williams College. David Little is the pharmacy manager at Genoa Healthcare in Bennington, Vt.

Now, in their spare time, they operate this frozen yogurt café.

“I love my job, but David was getting extremely burned out. He needed a change — I wanted him to enjoy what he was doing,” Colleen Little said during a recent interview.

As they pondered what type of business they should get into, one of their daughters made a suggestion: Open a frozen yogurt shop. The more they thought about it, the more sense it made.

“It was a happy inspiration, and it was good for everyone,” said David Little. “It made sense for the town, the [Williams College] students, and for us.”

He started looking into it and figured out that his pharmaceutical knowledge, specifically his chemistry skills, would come in handy in devising recipes for new frozen yogurt flavors.

Indeed, the shop has become known for veering into unknown directions in yogurt flavors.

Recently, the featured flavor was a raspberry-mint lemonade sorbetto. A couple of weeks ago, Spoon Café offered a cucumber-lime sorbetto and a red velvet cake gelato.

“I tend to have a lot of fun in the summer when there are lots of fresh, locally produced fruits and vegetables to try out,” David Little said.

The Littles were going to open the cafe in March 2020, but COVID-19 had other things in mind. After the pandemic shut down everything, they decided to scale down their plans a bit and include curbside pickup and online ordering.

Opening day arrived four months later, on July 4, 2020. With everyone focused on staying healthy and strong during a pandemic, the Littles decided to focus on the healthy nature of frozen yogurt and the toppings. David Little points out that a cup of frozen yogurt has fewer calories than a cup of ice cream.

Open Wednesday through Monday, Spoon Café offers four flavors which change every week including variations of non-dairy, vegan and low-fat, along with an array of toppings such as fresh fruit, nuts and cookies.

“We learned that using high quality, locally-sourced ingredients is really important, as is the way the frozen yogurt is produced,” David Little said. “Frozen yogurt is as creamy and rich as ice cream without the added sugar and fat content. And it’s less filling and more digestible because of the active live cultures in yogurt. It’s also very high in protein and calcium as well as other vitamins and minerals.”

Spoon Café also features locally-baked treats such as apple fritters, cinnamon rolls, cookies and specialty pop-tarts from the bakery at the Break Room, a restaurant based at the Greylock Works mill.

Coming soon, Spoon will be adding Pete’s Coffee and Espresso, which will allow the café to serve an Affogato, an Italian delicacy that combines original-flavored frozen yogurt with a warm espresso shot on top.