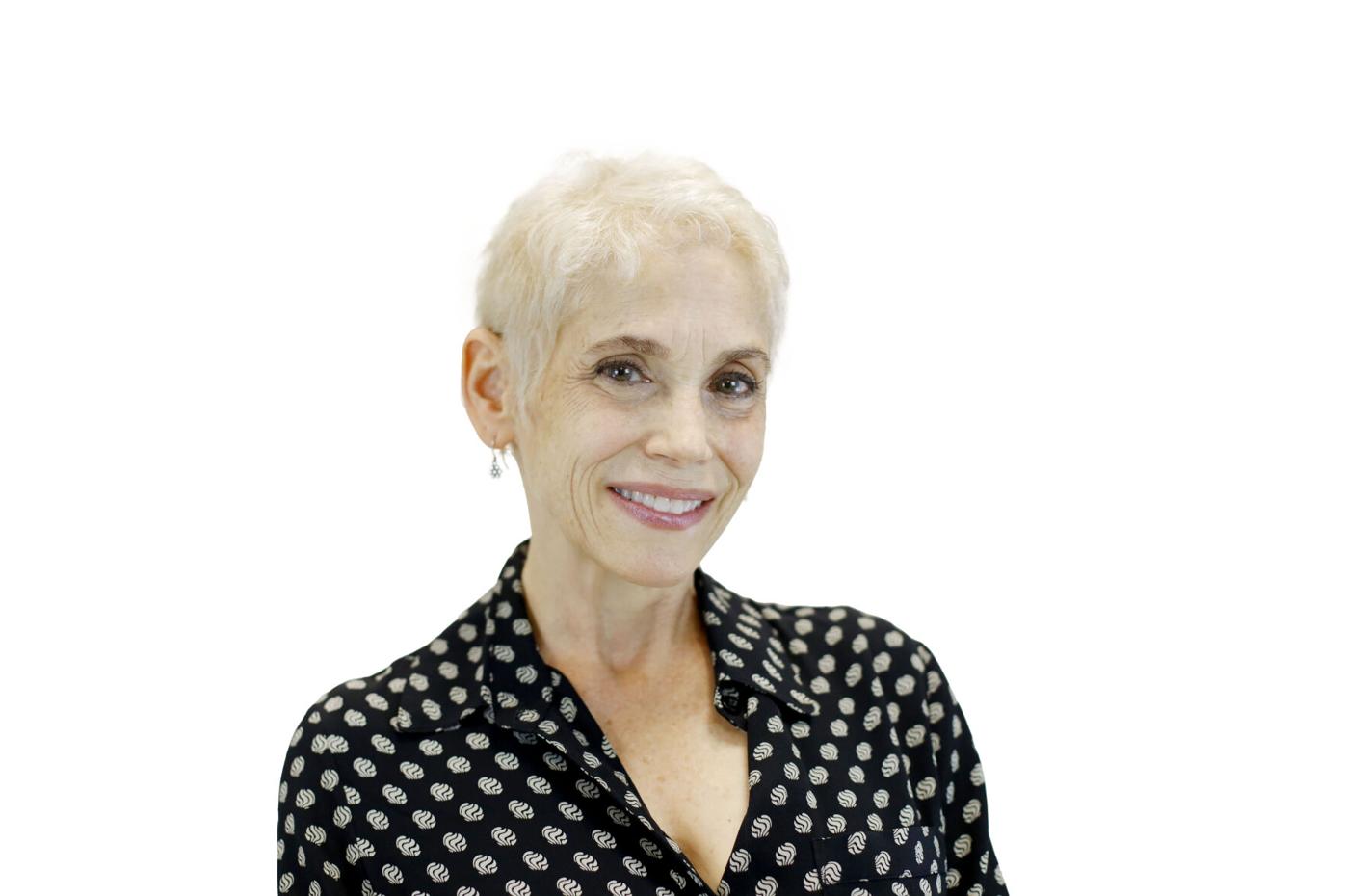 Stacey Nelkin, now a resident of Great Barrington, starred in "Halloween III: Season of the Witch," the only movie in the series to not feature Michael Myers. 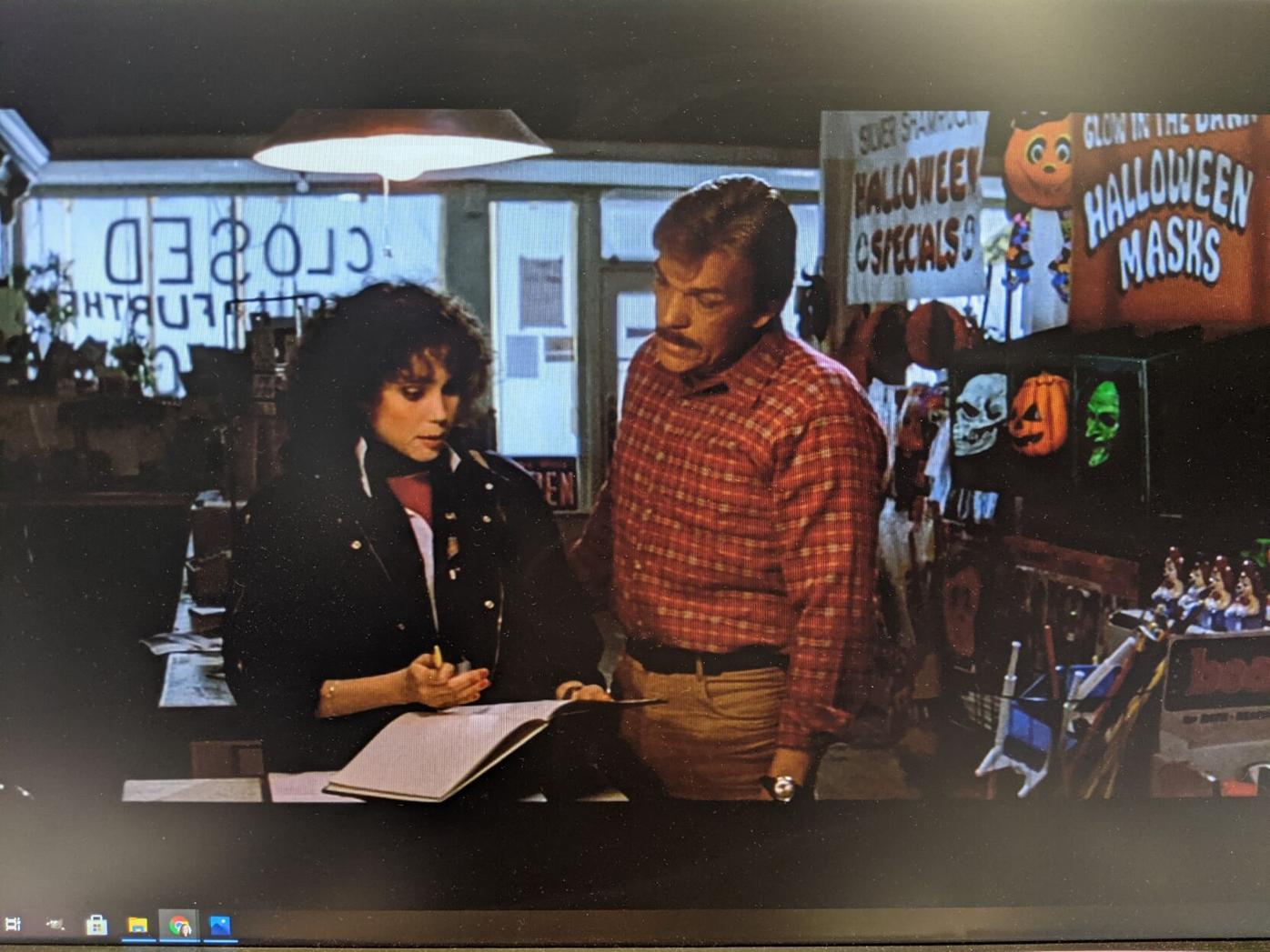 Stacey Nelkin as Ellie Grimbridge and Tom Atkins as Dr. Dan Challis in "Halloween III: Season of the Witch." 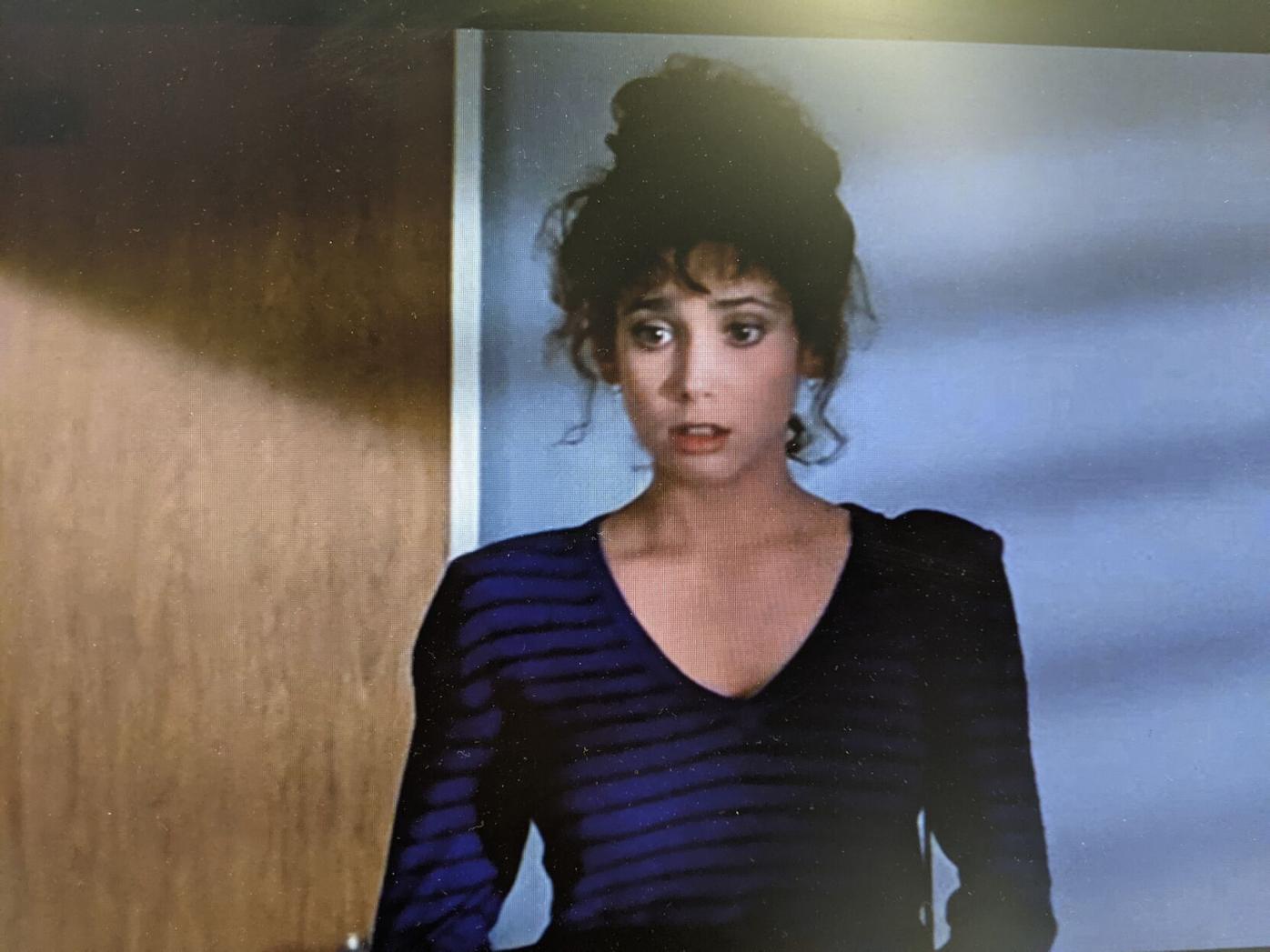 Stacey Nelkin as Ellie Grimbridge in a scene from the 1982 release, "Halloween III: Season of the Witch." 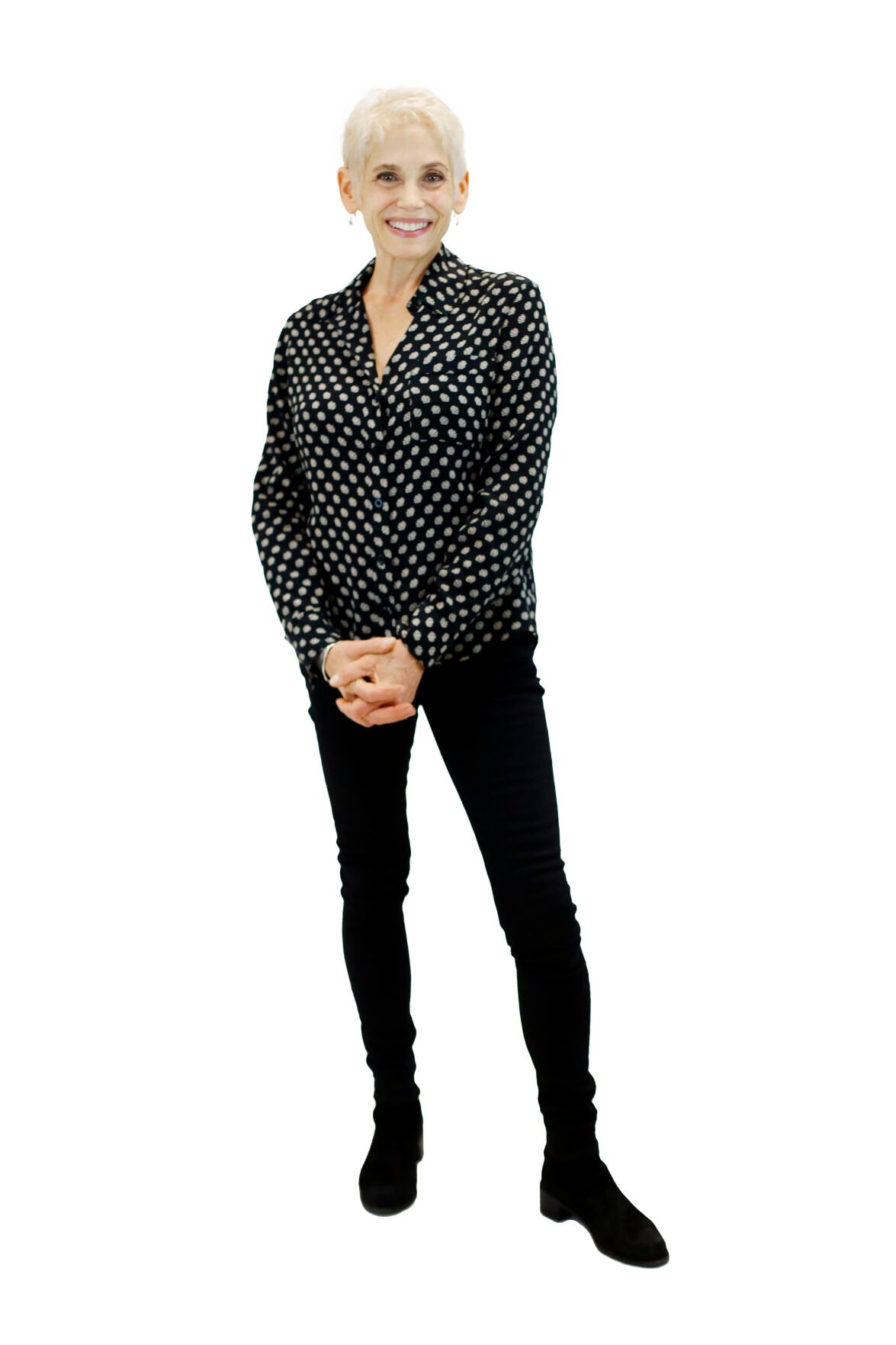 Stacey Nelkin, now a resident of Great Barrington, starred in the 1982 horror movie, "Halloween III: Season of the Witch."

GREAT BARRINGTON — When a friend first suggested to Stacey Nelkin that she should audition for the lead in the 1982 horror film, “Halloween III: Season of the Witch,” she had no interest in the role or appearing in a horror movie.

“It truly didn’t interest me because I was not a horror fan. I’m still not, I hate to say it, although, I love the fans. I’m a fan of the fans, but I’m not a horror fan,” said Nelkin, who now lives in Great Barrington, during a recent interview with The Eagle.

“I was traumatized by watching ‘The Exorcist.’ I was 12 or 13 when I went to see it in the movie theater. I didn’t sleep for three weeks, a month. I had nightmares, so I swore off horror movies.”

Some 40 years later, “Halloween III” — the only film in the “Halloween” franchise not to feature masked killer Michael Myers — has its own cult following. And so does Nelkin, who eventually auditioned for and won the role of Ellie Grimbridge.

If it hadn’t been for her friend Ron Walters, the movie’s makeup artist (and roommate of her then-boyfriend, actor Perry King), she would never have auditioned for the role.

“Every couple of weeks, he’d say, ‘Stacey, they’re getting closer …’ I finally called my agent, I was with Creative Artists Agency at the time, and said, ‘Just get me a copy of the script. Let me read it and see what this is about.’ And I read the script and I loved my character, Ellie. I thought, I could do this, because I just got her.”

Nelkin auditioned for the movie and landed the role of the female lead that day.

I'll be right back ... Your guide to horror films

“Literally, as I was walking home from the audition, putting my key in the door, the phone was ringing — this was before cell phones — I had to run in to answer the phone,” she said. “It was my agent saying: ‘You got the part. You have to go to makeup tomorrow and you’re shooting in two days from now.’ I went in the next day because they had to make a death mask and a cast of my arm for the ending of the movie. That was it. It happened so quickly. I’d never had anything happen that quickly.”

The movie came and went in movie theaters.

“None of us expected anything from it,” Nelkin said.

And then, she said, about 20 years ago, the movie started to generate its own buzz.

“I’ve seen my co-star Tom Atkins (really, I was his co-star as he had been in many John Carpenter films) every year for the last 20 years since this film has gotten more and more buzz,” said Nelkin, who the weekend prior to her interview with The Eagle had been signing autographs at Monster Mania-Con in Huntville, Md. “And now, it has a genuine cult following, which just blows Tom and me away. It completely blows us away, because as an actor, you do the movie, it doesn’t do well and you move on.

“It wasn’t even a movie I talked about because I’m not a horror fan and I was doing all these other things. I never thought about it. It was not a film I would even mention when I would roll off credits of things I had done. And now, it’s just kind of weird life happens that way. It was something in the past, that was forgotten. And now, all these fans have resurrected it and really, really like it. That’s awesome.”

Fans of the movie theorize that the film didn’t do well when it was released in 1982 because it failed to feature Michael Myers. Instead, the movie had a stand alone plot that involved a plot to kill children across the country using Halloween masks that contained pieces of a stone stolen from Stonehenge.

“They probably should have never attached it to the ‘Halloween’ series. It didn’t help that after it, they went back and made ‘Halloween’ IV, V and VI with Michael Myers in them,” Nelkin said. “The original idea, which I’ve only learned in the last few years from hearing about it at conventions from Tom and the director, was that John Carpenter and the other producers were going to make a ‘Halloween’ movie every year with a different story. You could do a million different stories like that. But they didn’t do that.”

After shooting “Halloween III,” Nelkin went on to appear in “Yellowbeard,” with Graham Chapman, Peter Cook, Peter Boyle, John Cleese and Eric Idle. In the years that followed, she appeared on several TV series including “The A-Team,” “Murder, She Wrote,” “The Fall Guy,” and “Simon and Simon,” as well as the ‘90s soap opera, “Generations,” where she played Christy Russell.

So how did Nelkin, now a mother of three who works as a certified alcohol and substance abuse counselor, get her start in acting?

“The real question is how would I not have become an actor? My father died of drug overdose when he was 37. I did it to escape a very dysfunctional family,” she said.

What scary Halloween movie should you watch tonight? A list of spooky streaming options

Her first acting gig and her first experience with nepotism happened at the same time — she lost the role of Dorothy in her Brownie Troop’s production of “The Wizard of Oz,” to the troop leader’s daughter. But then, she was hooked and began acting in school plays, and yes, from there on out, she won the lead every time.

“I got an agent at 14. I was at Stuyvesant High School [in New York City] and going on auditions four to five times a week. I didn’t get any work until I was 16. I landed two national commercials.”

At 16, she had a part in “Annie Hall,” which never made it into the movie, but she has said in interviews that she dated Woody Allen after that.

Two years after her national commercials, she was in Los Angeles for a movie role and remained on the West Coast for the next 16 years. She starred as Bonnie Sue Chisholm in four episodes of the CBS western miniseries “The Chisholms” in 1979, but passed on the second season (the role then went to Delta Burke) to appear in “Up the Academy.” She filmed “Halloween III.” She married and divorced Barry Bostwick. She almost had a role in “Blade Runner.”

“I was up for the role of Pris, which eventually went to Darryl Hannah. We did the most amazing screen tests in full costumes and full sets. It was Darryl and Sean Young in one screen test and myself and another actress, Nina. What it came down to was Ridley Scott did not think I was conceivably big enough to beat up Harrison Ford,” Nelkin said.

But, Scott liked Nelkin enough to write in the part of Mary, a sixth Nexus-6 replicant that escapes from “off-world” and comes to Earth.

“I went in for hair and makeup and costumes,” she said. “I was at Jane Fonda’s workout when I got a call on the payphone. The movie was way over budget and they cut my part. I was paid my weekly salary though.”

It wasn’t until 2007, when the 25th anniversary edition of “Blade Runner,” also known as “Ridley Scott’s Final Cut” was released on Blu-Ray, that Nelkin’s screen test was seen by fans of the film — it appears on Disc 4 of the boxed set.

Nelkin made her way back to her hometown of New York City, where she met and eventually married Marco Greenberg. (They had two children and adopted a third.) She reinvented herself as a “relationship expert” and co-authored a book. She began taking class in drama and music therapy at The New School. She then became a substance abuse professional and certified alcohol and substance abuse counselor and began working with individuals dually diagnosed with mental health and substance abuse issues.

“I’m really blessed,” she says of her life. “I’ve had many different chapters to my life. I didn’t set out to do the things I’ve done, it just happened that way. I’ve always wanted to give back and I found a way. I work with such amazing people who are all helping make the world a better place in some small way. To have [this career as] a full-time job feels like a real blessing.”

So, is she done acting? Not yet.

“We were outside SoCo Creamery in Great Barrington and Marco found a posting about a movie that was going to be shooting locally,” Nelkin said. “I called the number on the poster ... I spent all last week shooting the movie.”

That movie, “The Shed,” happens just happens to be a horror film.