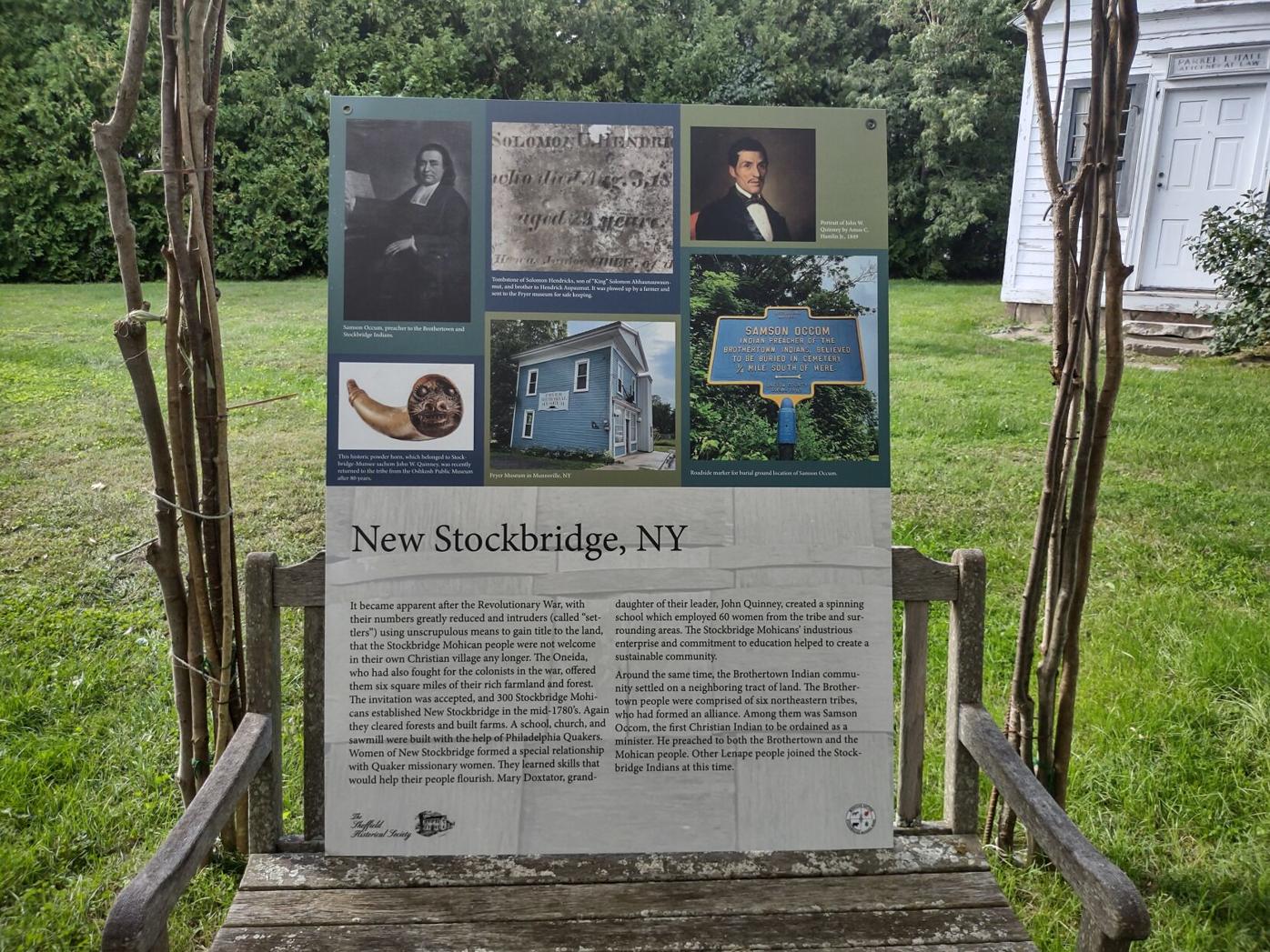 "The Mohican Journey," an outdoor exhibit at the Sheffield Historical Society, is open to the public, free-of-charge, through Oct. 11. 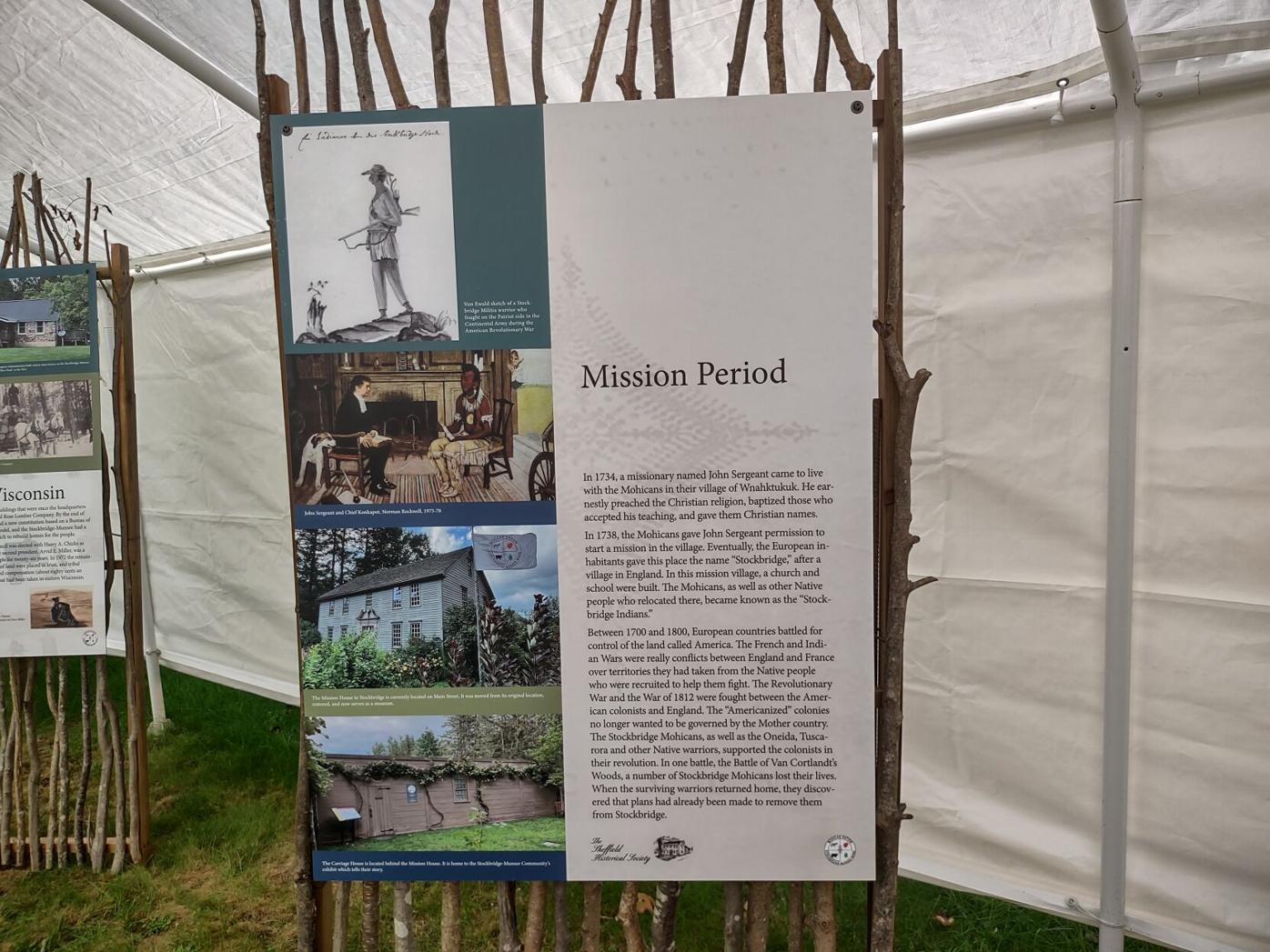 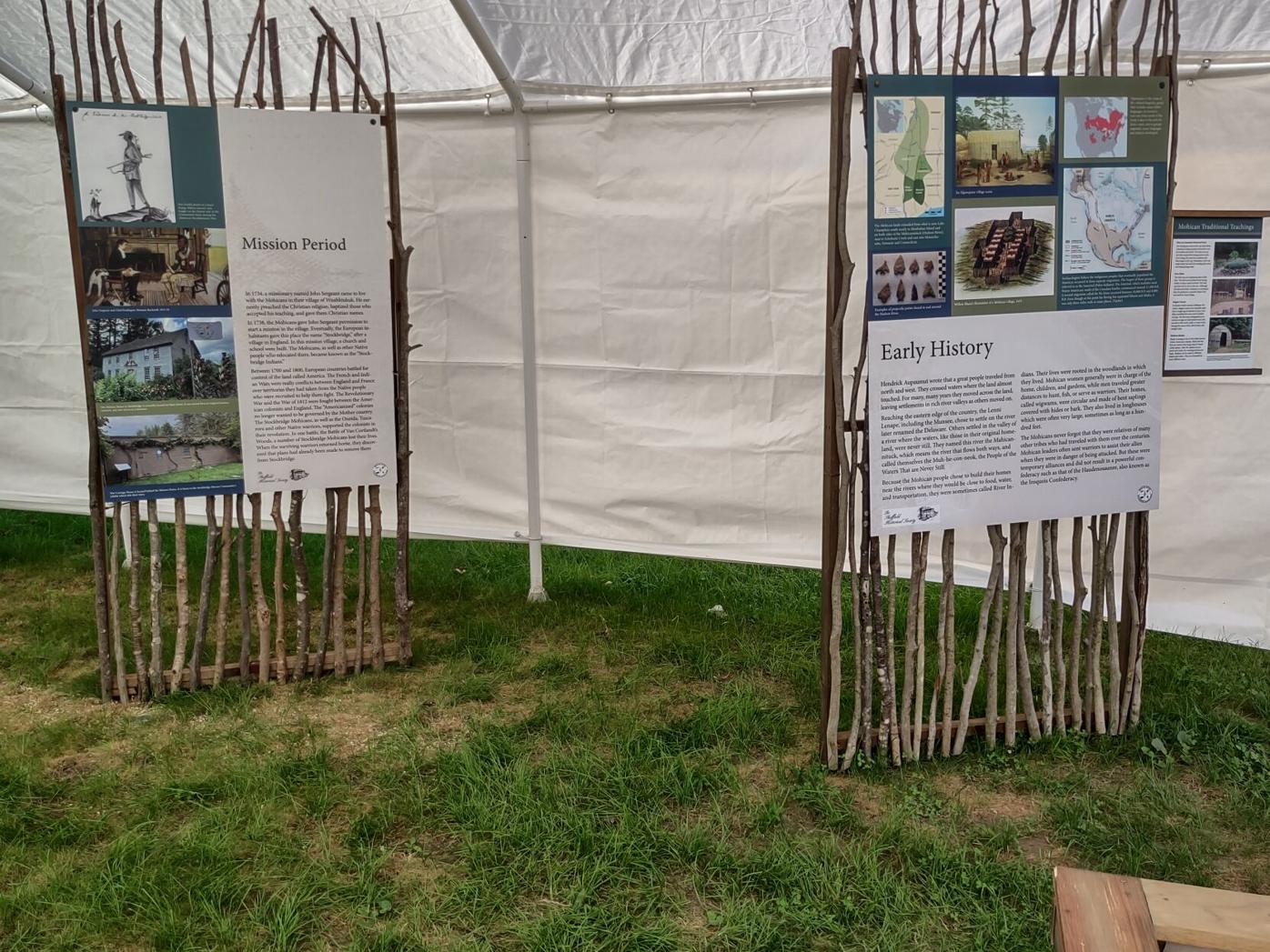 Dual panels of "The Mohican Journey" exhibit at the Sheffield Historical Society.

"The Mohican Journey," an outdoor exhibit at the Sheffield Historical Society, is open to the public, free-of-charge, through Oct. 11.

Dual panels of "The Mohican Journey" exhibit at the Sheffield Historical Society.

SHEFFIELD — The Stockbridge-Munsee Band of Mohicans wants you to know their story. And they want to be the ones telling it to you.

Their latest effort, "The Mohican Journey: Homelands, History and Hope," an outdoor exhibit on display through Monday, Oct. 11, is the result of a nearly yearllong collaboration of the Stockbridge-Munsee community, the Sheffield Historical Society and the art department at Mount Everett Regional School.

What: An interactive, multimedia exhibit that breaks down the history of the Muh-he-con-ne-ok, the "people of the waters that neve stand still."

"Exhibits like [Sheffield's] allow us to be able to tell our history our way and in truth. There is no sugar-coating history in Indigenous history. Removal happened. Genocide happened. Loss of language, tradition and culture happened," said Heather Bruegl, former director of Cultural Affairs for the Stockbridge-Munsees, in an email to The Eagle.

In their own words: Stockbridge-Munsees share past. present and future in 'Muh-he-con-ne-ok: People of the Waters That Are Never Still'

The reliance on local organizations with an open mind is the kind of partnership that ensures, "the outcome accurately reflects Stockbridge-Munsees' voice,"  said Bonney Hartley, historical preservation manager for the Stockbridge-Munsee Band of Mohicans.

"The Sheffield Historical Society and [Mount Everett art teacher Stephanie Graham] listened to our stories, learned from works we had already created, and took the initiative to generate the new exhibit, making sure that our Cultural Affairs Department vetted the drafts along the way," said Hartley, who works in the tribal council's Berkshires-based office at Williams College, said in an email to The Eagle.

The Sheffield exhibit, which uses photographs, displays and video interviews, tells the history of Stockbridge-Munsees from the arrival of the first Mohicans in the Hudson and Housatonic river basins thousands of years ago, to their first interaction with European colonists and through the forced removal and relocation of their people from the Berkshires to Wisconsin.

"As a society, we need to learn the history of the land and its first inhabitants which goes all the way back to [the Mohicans,]" said Paul O'Brien, president of the Sheffield Historical Society.

'We have a footprint on Main Street again': 'Mohican Miles' exhibit opens in Stockbridge

O'Brien and Graham are co-curators of the exhibit, with Graham assembling the 11 panels with information and photos provided by tribal officials.

The display also includes a look at the present day Stockbridge-Munsees, which includes a section on how the forced relocation has affected their community for generations;  a focus of Graham's two-week, privately funded trip in June to the Stockbridge-Munsee Community.

"I am grateful for all of the members of the Stockbridge-Munsee Community who took the time to share their knowledge and personal stories. Their words and emotions communicated the essence of their culture. Their voices will be elevated through both the Sheffield Historical Society and the curriculum resources to which they will contribute," Graham said, referring to her plans to infuse the Stockbridge-Munsee story into the teachings at Mount Everett.

Nadia Makuc, a senior at Mount Everett and project intern says past, present and future generations need to know the truth about how the regions first settlers thousands of years ago have been treated the past 400 years.

Despite only running for three weekends, the Sheffield exhibit will likely be updated and seen for years to come, according to O'Brien.

He said most of the exhibit will travel well and can be reassembled for any venue that wants to host it, including schools, libraries and other spaces open to the public.

The exhibit, he says, has been "extremely fulfilling."

"This has changed me. It has brought a whole new perspective of the people who originally settled this area," O'Brien said.

And that's part of the push to partner with Berkshire-based historical and cultural institutions.

"There is a real hunger to understand our homelands ... [and] the displacement of our peoples," Hartley said. "I hope people get a broader view of us as there is a commitment from many to get our story straight."