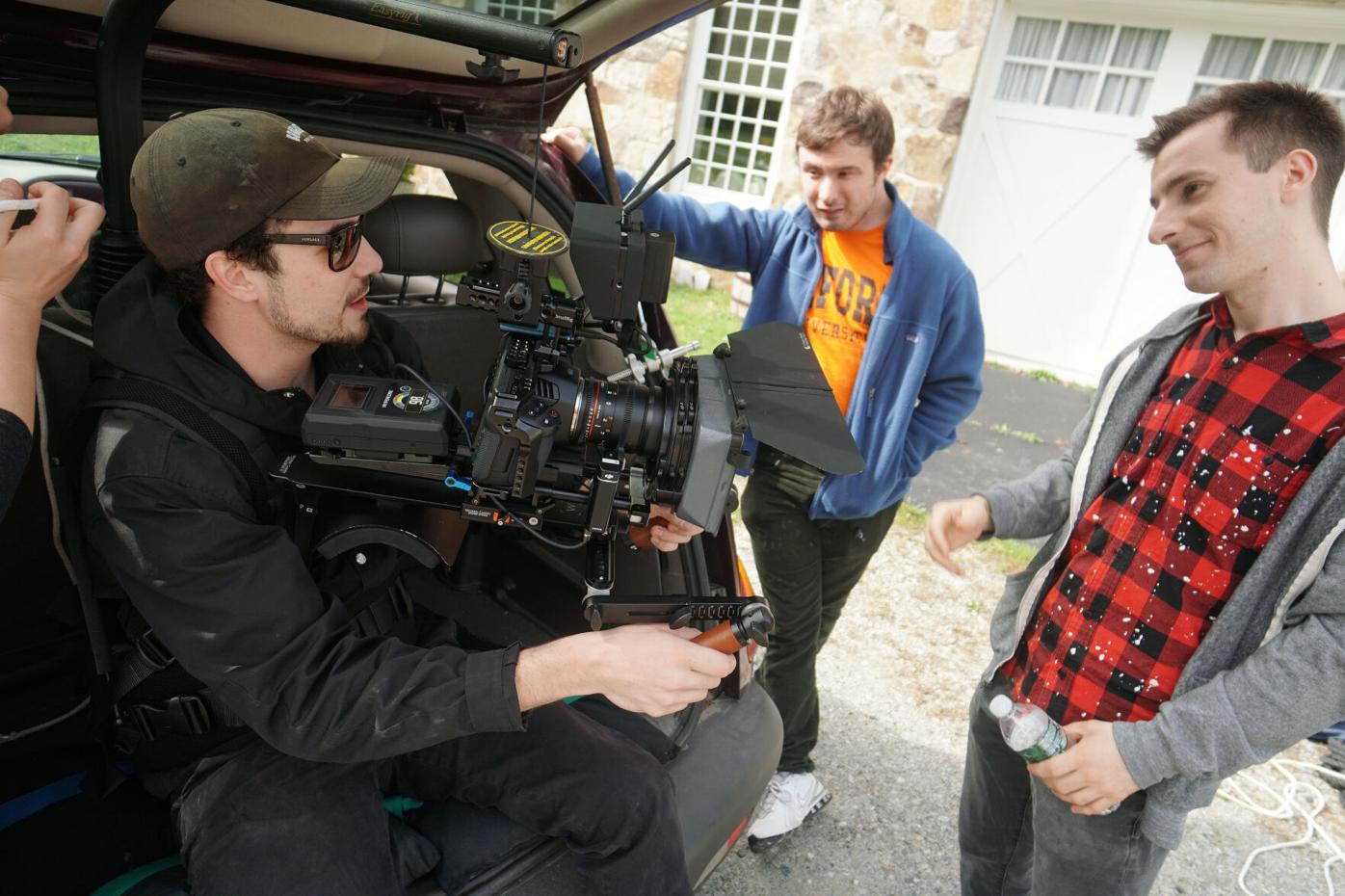 Director of photography Andrew Percival, director/co-writer Christian Frelinghuysen and actor Kyle Derosiers (Nathan) talk between filming scenes of “Stroke of Luck” at Orleton Farm in October 2019. The coming-of-age comedy is being released on on-demand streaming platforms on Monday, Jan. 11. 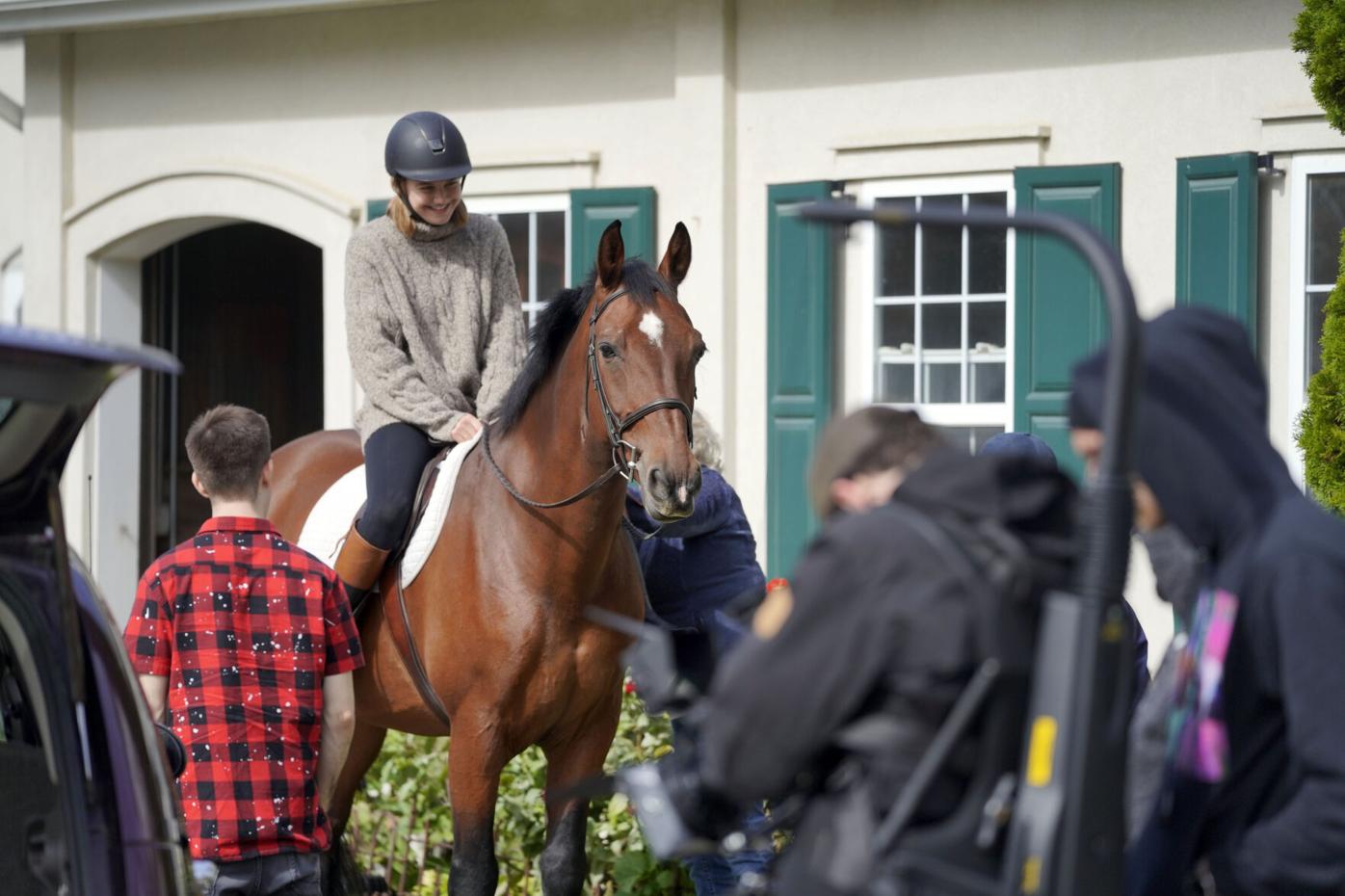 Actor Sara Ball (Sarah) gets comfortable with her horse Ceasar before filming a riding scene for the feature film “Stroke of Luck” at Orleton Farm, Stockbridge, in October 2019.

LENOX — A film written and produced entirely in the Berkshires is being released on major on-demand digital streaming services including Apple TV+/iTunes, Amazon Prime Video, Google Play and VUDU through a North American distribution deal with distributor Gravitas Ventures.

“Stroke of Luck,” a coming-of-age comedy, filmed entirely in the Berkshires in late 2019, will be released on Tuesday with pre-release sales beginning today, and continuing on Saturday and Sunday.

The film follows Nathan, a young man sent to live on his father’s farm after he pulls a damaging prank at his high school in the city. Nathan finds more than he bargained for on the farm, including Sarah, a charming and independent farm hand.

There’s also a bizarre crime ring, a deranged pop star played by John Popper, lead singer of Blues Traveler, and a talking horse, Fritz, whom only Nathan can hear.

The 80-minute film was directed and co-written by first-time feature filmmaker Christian Frelinghuysen and shot primarily at Orleton Farm, in Stockbridge, which is owned by cousins, Harvey and Mary Waller. The screenplay, co-written with Bella Gadsby, is based on an original story by Frelinghuysen and his cousin, Thomas Frelinghuysen, who appears in the movie as Chaz.

“Producing a movie is never easy,” said producer Mark Farrell in a statement, “and this pandemic-surviving struggle was no exception. Kudos to our amazing cast and crew that toughed out so many difficult extenuating circumstances without showing any of it on the screen.”

Farrell, a resident of Lenox and former head of comedy development for the Oxygen Network, produced “Curb Your Enthusiasm” as well as other series and specials for HBO, Comedy Central, MTV and Showtime. He was introduced to Christian Frelinghuysen by Berkshire Film and Media Collaborative’s Diane Pearlman.

Elizabeth Aspenlieder and Michael Burnett of Shakespeare & Company also served as producers, helping with the hiring of local crew and working with a handful of local restaurants, hotels, businesses and friends to help provide support to the film. Aspenlieder also served as the Berkshires casting director.

The film features more than 60 community members as background actors, as well as others, such as Cheeseman, Greg Boover, Julian Findlay and others from Shakespeare & Company, Aspenlieder said in an email, noting that John Toole, owner of Toole Insurance, plays the father of Thomas Frelinghuysen’s character.

Other filming locations include Betty’s Pizza Shack, Bagel and Brew and Undermountain Farm in Lenox, the Stockbridge Bowl and Shire Glass Co. and Plaza Package in Great Barrington.