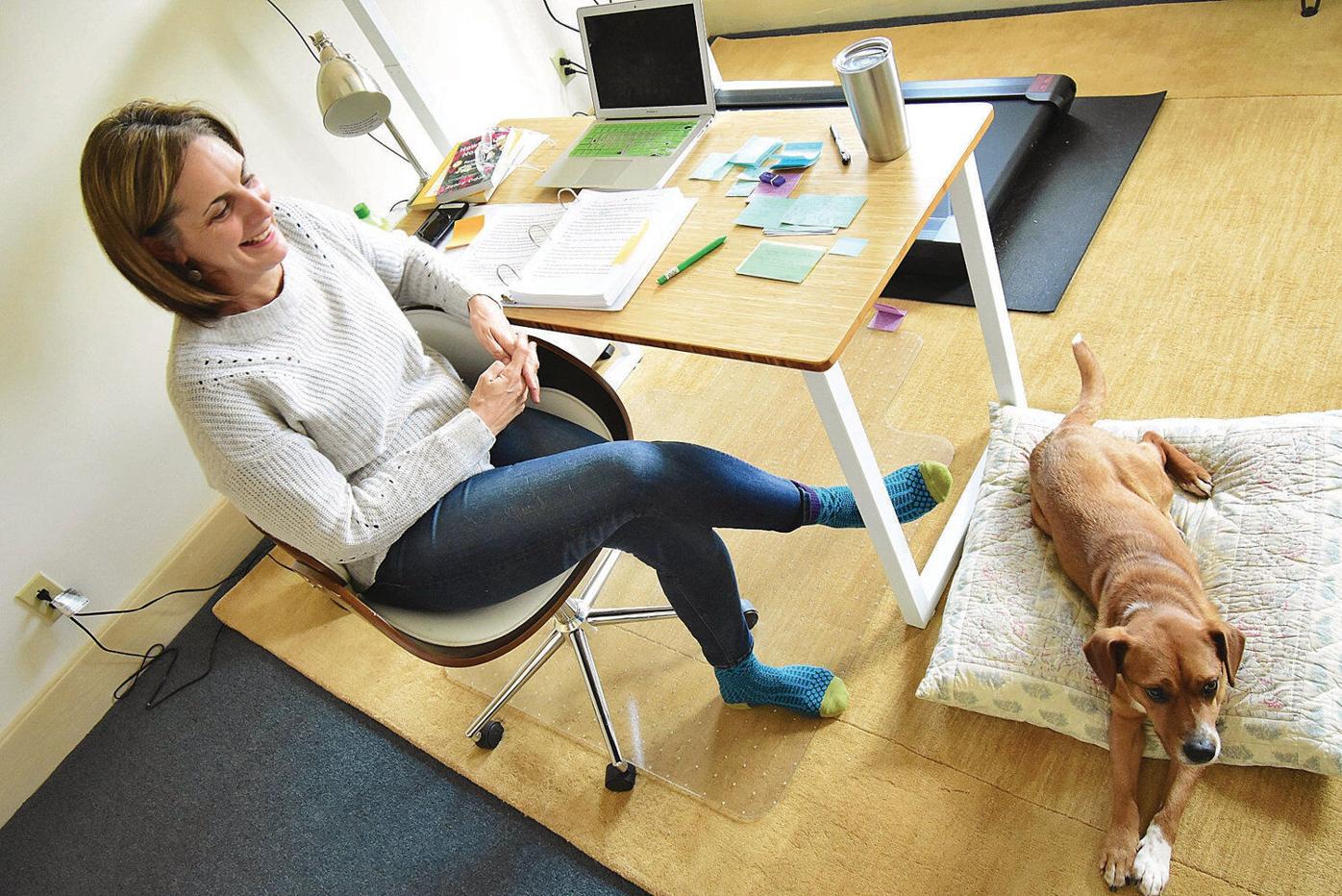 Benjamin, with her dog Charlie at her feet, at her office in Williamstown. 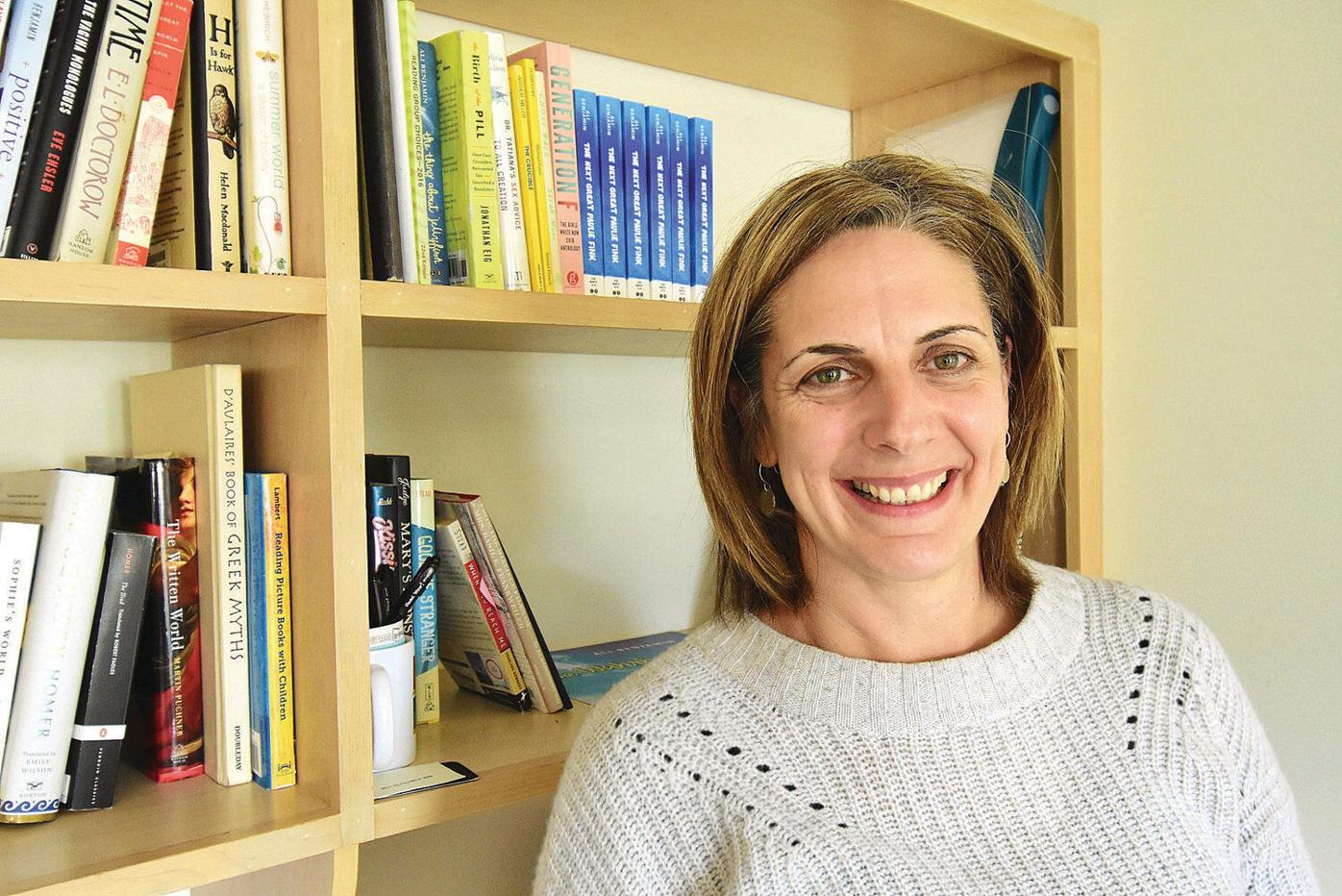 Williamstown author Ali Benjamin is set to release her next novel, "The Next Great Paulie Fink," on Tuesday. 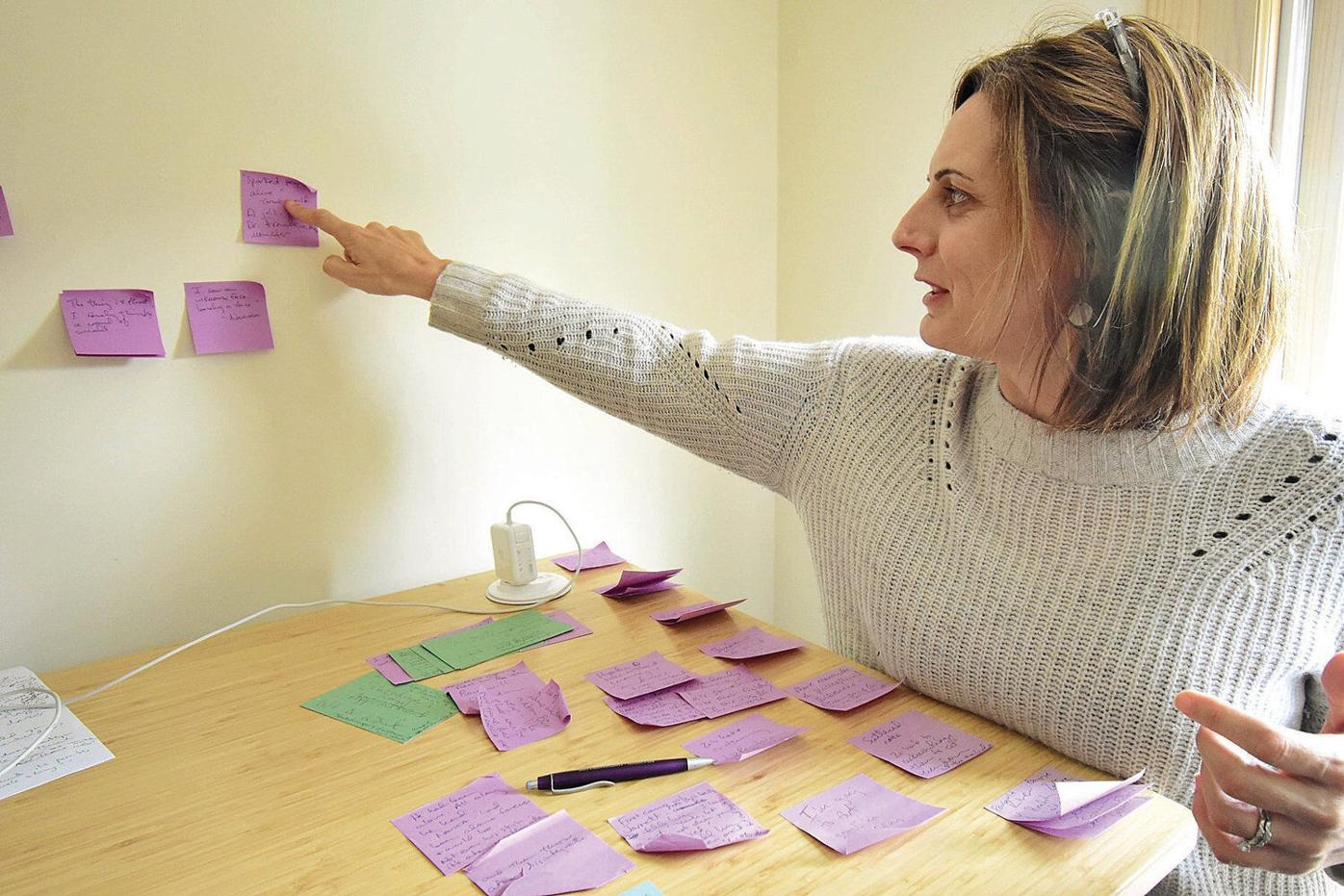 Benjamin uses post-it notes in her office in Williamstown to help structure her stories and organize scenes she's written.

Benjamin, with her dog Charlie at her feet, at her office in Williamstown.

Williamstown author Ali Benjamin is set to release her next novel, "The Next Great Paulie Fink," on Tuesday.

Benjamin uses post-it notes in her office in Williamstown to help structure her stories and organize scenes she's written.

WILLIAMSTOWN — In 2015, Ali Benjamin's middle-grade novel, "The Thing About Jellyfish," was named a National Book Award finalist. It's the type of honor that, fair or not, can suggest a masterful grasp of narrative. Yet, during the run-up to the 2016 U.S. presidential election, Benjamin allowed her notion of storytelling to shift.

"I would have thought before that — not completely, but more — that we build our stories from what we see. That we take in information, and we tell ourselves a story. We do the best job we can in taking in information and fact, and we create narratives from that," Williamstown-based Benjamin said in her writing studio along Route 2 on a recent Tuesday afternoon. "And the election showed me something different: that we kind of choose a story, and then we choose our facts based on the story that we have preselected. Not always, but there is a strong human tendency to do that."

This realization underlies the legends in "The Next Great Paulie Fink," Benjamin's latest middle-grade novel that Little, Brown Books for Young Readers will publish Tuesday and the author will sign at The Williams Bookstore on Thursday night. In the book, a Mitchell School newcomer is tapped to judge a reality show-style competition to replace class clown Paulie Fink, who has not returned for seventh grade at the tiny rural Vermont school. Since Caitlyn Breen has never met Fink, she must try to conjure his character through her classmates' recollections, an undertaking that reveals just how subjective storytelling can be when people are including and excluding certain facts.

"She's trying to sort through what is myth, what is real," Benjamin said.

In the process, Breen also uncovers more about her own self-perceptions, such as her relationship to control. She doesn't abuse her power, which is important to Benjamin.

"Everybody talks about girls like they're so mean, but the time they start being mean is right around the time that they start really understanding that the world isn't going to be kind to them. And I think if we were better at giving girls actual power, we would see less of the 'Mean Girls' stuff," the author said.

Benjamin wanted to tackle serious contemporary issues in her second novel, just as she had in "The Thing About Jellyfish." Her debut novel tracked Suzy Swanson's quest to prove that a jellyfish sting is responsible for her friend's drowning death. This journey takes her around the globe and into the depths of scientific inquiry and loss.

"The dedication of 'The Thing About Jellyfish' reads, 'For curious kids everywhere.' It could also read, 'For all those kids who need a gentle nudge to look closer at nature and science.' Or perhaps, 'For grieving kids who are struggling to come to terms with their losses, and seeking a path to peace and conciliation,''' Jacqueline Kelly writes in a review for The New York Times.

The novel's acclaim led to Universal optioning its rights. Millie Bobby Brown ("Stranger Things") and director Wanuri Kahiu are attached to the project, as are writer Molly Smith Metzler and a production team that includes Reese Witherspoon.

"It feels sort of surreal," Benjamin said of the film, which hasn't begun production yet. "It almost becomes its own thing."

"All the weirdness, all the quirkiness, all the stuff that I thought was mine alone, I poured into it," she said, "so the idea that it resonated with people was very strange to me but also really nice. It kind of made the world feel a little smaller and friendlier."

It also added pressure to her next book. Initially, she aimed to focus on gun violence. It didn't stick.

"I had a lot of trouble finding anything hopeful that I could say to kids in a book about gun violence," she recalled.

On the side, however, she had been working on "The Next Great Paulie Fink."

"Theoretically, the smart marketing thing would have been to do something that's very similar [to "Jellyfish"], and this really was so different. It was much lighter. It was much sillier," she said.

Over time, it turned into a weightier tale, incorporating philosophy. Benjamin's creative philosophy doesn't adhere to an outline.

"I don't know how to structure books. I don't have the structure. I often will write scenes and not know where they go," she said.

She places colorful index cards and Post-it notes on various surfaces in her studio, which features a treadmill adjacent to her desk. On a tabletop above it, she pointed to different notes she had jotted down. One was a Jean-Paul Sartre quotation. Another was about shadows.

"This was just as I was reading something I wrote, I was like, 'There are no shadows, but there would be,'" she recalled.

She'll also describe scenes on index cards, arranging them on the floor.

"I can't have this scene yet because this one hasn't happened," she said she'll learn.

The northern Westchester County, N.Y., native hadn't planned on being a writer. At Grinnell College in Iowa, she majored in anthropology after dabbling in different subjects. She still enjoys doing that today.

"As a writer, you can learn a lot about a lot of different things. You can get on a track for a while and then get off of it and do something different," she said.

Following school, she worked in communications at health care and software firms in Chicago and New York City. After a stint with the Peace Corps in West Africa, she and her husband, Blair, returned to the U.S., settling in North Adams in late 2000. Moves to southern Vermont and Williamstown followed. All the while, Benjamin did communications work.

"I always wound up figuring out how to tell the story of the organization," she said.

Eventually, she was laid off from a gig, leading her to become a full-time writer. She was pregnant at the time, turning in work for "anybody who would pay me to write something." Storey Publishing was one of those places. She co-wrote Storey's "The Cleaner Plate Club" with Beth Bader. The book lightheartedly offered vital information about feeding children.

"That was really fun because then my name was on the book, and I was like, 'Maybe this is something I can do,'" Benjamin said.

A chance encounter with Paige Rawl at an event in New York City inspired Benjamin's next work. Rawl, who was born HIV-positive and bullied during her childhood, was looking for someone to help write her memoir. Benjamin quickly agreed.

"Positive" arrived in 2014, the same year that "The Keeper" was published. Benjamin worked with U.S. men's soccer team goalkeeper Tim Howard to release his memoir right after he rose to international fame during the World Cup. She felt that Howard had a great story as both an athlete with Tourette's syndrome.

"I think that the story that he wanted to tell was very much about his growing up and about his Tourette's," she recalled.

That year was a busy one for Benjamin, who is set to embark on a book tour that will bring her to the Midwest after the Berkshires, where her filmmaking sister, Cynthia Wade, also resides. On this particular Tuesday afternoon, Benjamin had also just printed her next project: a contemporary retelling of Edith Wharton's "Ethan Frome."

"It's set over the week of the [Brett] Kavanaugh hearings in 2018, and Zenobia is sort of an angry middle-aged woman who's just furious about politics," Benjamin said.

A mother of two daughters, 17-year-old Merrie and 12-year-old Charlotte, Benjamin strives to tell stories about women and important contemporary issues. Benjamin is grateful, and more than a little surprised, that she has the opportunity to do so in fiction.

"Because I didn't think anybody was going to read 'Jellyfish,' I was able to just try to tell a truth about what it is to be in the world really un-self-consciously," she said, "and it turns out that that's all you need to be a writer, or something."