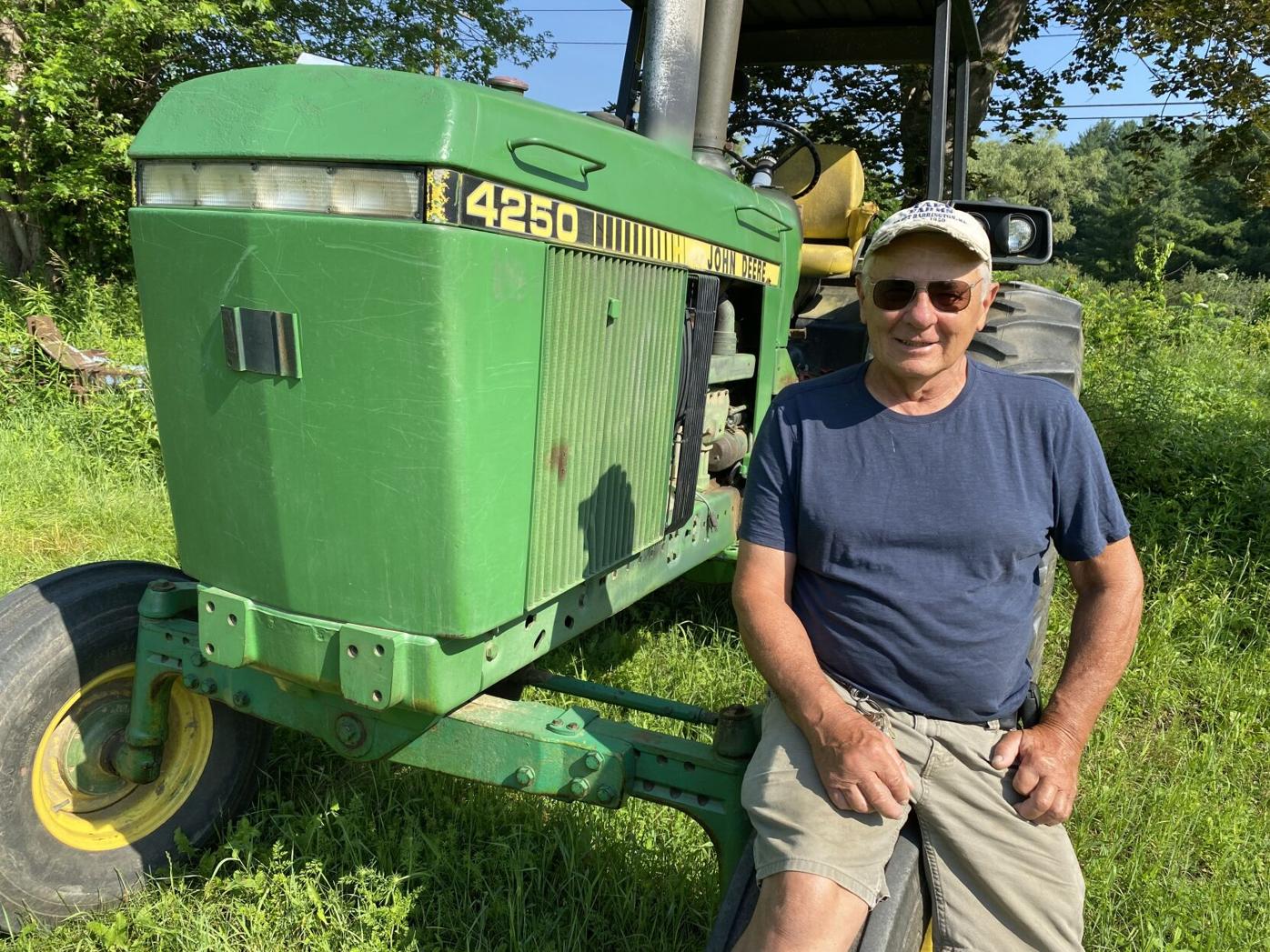 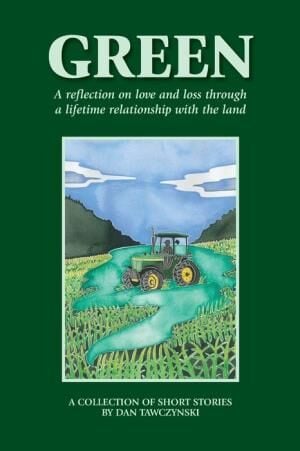 "Green: A reflection on love and loss through a lifetime relationship with the land"

"Green: A reflection on love and loss through a lifetime relationship with the land"

GREAT BARRINGTON — Dan Tawczynski, a farmer since 1950, a published book author as of June 1, wants to talk about the green mist.

Actually, he wants to talk about a lot of things.

He climbs into his pickup truck that doubles as his office. He keeps a loop hoe in the bed and his wallet on the front dash. Wedged upon the seats and floor, various bottles of engine-related lubricants mingle with paperwork and whatnot.

“Sorry about the mess,” Tawczynski says.

The wallet on the front dash, by the way, is not the same wallet from which an eclipse of moths had taken residence years ago (see page 160 of his book). That wallet is long gone. This wallet, like any wallet he’s ever owned, has rarely been engorged with greenbacks. He’s a farmer. He can keep his wallet on the dash, no worries.

His office on wheels, a GMC on arthritic suspension, includes a couple cases of his new book. It’s called "Green: A reflection on love and loss through a lifetime relationship with the land," published by Light of the Moon, Inc. It’s his first book, a collection of short stories.

Tawczynski is 76. He’s prone to tallying things. He’s got four grown kids. He farms nearly 200 acres. It took him 40 years to finally grow the perfect potato, just in time for a huge potato crop to be nearly worthless. (“No one stores potatoes over the winter anymore,” he says. “When was the last time you saw a new house built with a root cellar?”)

It also took him 40 years to finally heed the advice of friends to assemble a book. He’s been writing since the early 1980s. "Green" has 25 stories. Tawczynski says he has 100 more stories where that came from.

He steers the pickup past the store named for the farm he founded, Taft Farms, off Route 183. He putters along a rutted farm road that leads into the beautiful bottomlands along the Housatonic River.

That tiny, 2-feet-wide brook with the wild blackberry along it, as a boy it was his refuge. He would hide in the tall grass there, along with his dog, Mitzie. His parents had split when he was 10. The family dynamics were difficult. He writes of how his parents used him against one another.

In that tall grass, he was a confused kid trying to sort things out. He had lots to sort out. He had an extended family member whom he learned not to be alone with. He’ll leave it at that. That person is no longer living.

To this day, same as when he was a boy, Tawczynski can set a worm on a hook, drop a line into that little brook and catch a 6- to 10-inch trout, “excellent eating size,” he says.

His face furrowed by the learning curve of time, his laugh lines and lamentation lines cutting deep toward the vanishing point of eternally vulnerable crops, Tawczynski downshifts to a crawl along rows of salad greens ready for harvesting; past a tractor, broken down; along a patch of corn stunted by a late season cold snap; past asparagus that needs nurturing for next year. There are always things that need doing.

The 25 stories mostly involve things that have happened on this land, good and bad — friendships, family, fires, floods.

“There’s nothing so intoxicating as the perfume of freshly turned fertile soil,” he writes in his introduction.

He still lives in the home in which he was raised, around the corner, on Division Street, beside the river. His mother ran Helen’s Beauty Shop on the front porch. In 1950, at age 5, he set up his first farm stand using a card table and an umbrella. Before he had the mathematical ability to make change for a dollar, he was selling tomatoes and corn he grew in the back field. Each year, the garden got bigger.

He stuffed money away that he eventually put toward an education at Boston College. He met his future wife, Martha, there. He then took a job teaching English in Pittsfield. The career was short-lived. This was during the Vietnam War. Many of his male students were drafted upon graduation.

“Cannon fodder,” he says. He couldn’t bear to watch them go. He quit teaching, and along with his brother, Stan, he made “the big leap,” purchasing 85 acres adjacent to his mother’s land. This was 1968. They became full-time farmers.

“The day we purchased it, it was underwater, flooded,” Tawczynski recalls with a hearty laugh.

He brings the pickup truck to a full stop out at the far edge of that original 85 acres, by a patch of shade under poplar and swamp maples. This is one of his favorite places on the planet, and he has traveled the world.

In the background, Monument Mountain presses against the sky. In the middle ground, the tomatoes aren’t ready yet. Come fall, these fields will be cloaked in a mantle of pumpkins and squash that will be cut loose at the stem and shipped all over the region. In the foreground, a field has a cover crop of clover. Tawczynski's son, Paul, now manages the farm.

A red-winged blackbird cuts across the sky. That little brook that Tawczynski fishes — that he writes about — trickles into the Housatonic to the left. But if you follow it in the opposite direction, it leads up Monument Mountain. Just below Squaw Peak, you’ll find its headwaters. Tawczynski has followed that brook countless times. Somewhere up there (he won’t say where) he once discovered a gold mine of sorts: about a dozen white American truffles. He has never found them since then.

Leaning against his truck, he smacks at a deer fly picnicking upon his hand, leaving a red gotcha-splatter of his own blood.

The grass here is tamped down still from a Fourth of July family picnic. The remains of jalapeño peppers are left on the ground. Among the plentiful wildlife that have their way with Taft Farms’ bounty, no takers yet for the scattered jalapeño peppers.

Out here in his favorite spot, Tawczynski wants to talk about mist, green mist.

"You know," he says, "there's a phenomenon that occurs from time to time out in the fields. It's a green mist. It happens at midday, when you wouldn't expect it. I'll be out there writing on my clipboard, and suddenly I look up, and I'm surrounded by it. It's amazing. It just happens."

He has seen it maybe five or six times in his life.

"It's a spiritual happening," Tawczynski says. "It gives you a feeling — like, ‘Maybe I am doing things right,’ and I no longer doubt myself."

He wrote about it years ago for the publication American Vegetable Grower. Farmers around the country wrote to him about how they, too, have experienced the green mist. The book title is derived from it.

"The thing is, you can't be a farmer and not believe in God," Tawczynski says. "When you're a farmer, you realize everything is temporary, and we are just stewards, and the land doesn't belong to us."

His glasses have tinted from the bright sun, a break in the rainy weather.

In 1968, a week after the 85-acre purchase, the ground had finally dried out enough. Along with Stan and his wife, Maureen (both now deceased), Tawczynski and Martha explored all the way back to where Tawczynski is now standing.

“It was all smiles,” he recalls. “We were so happy we had made the big leap, and now we just had to make it work. Everyone said we were crazy.”

He pulls a hankie out of his pocket. That memory serves as pleasant and painful headwaters to a streamlet of tears. Apologizing, he gently presses the hankie to his eyes — eyes that have seen the green mist.

"Green: A reflection on love and loss through a lifetime relationship with the land" by Dan Tawczynski.

Published by Light of the Moon, Inc.