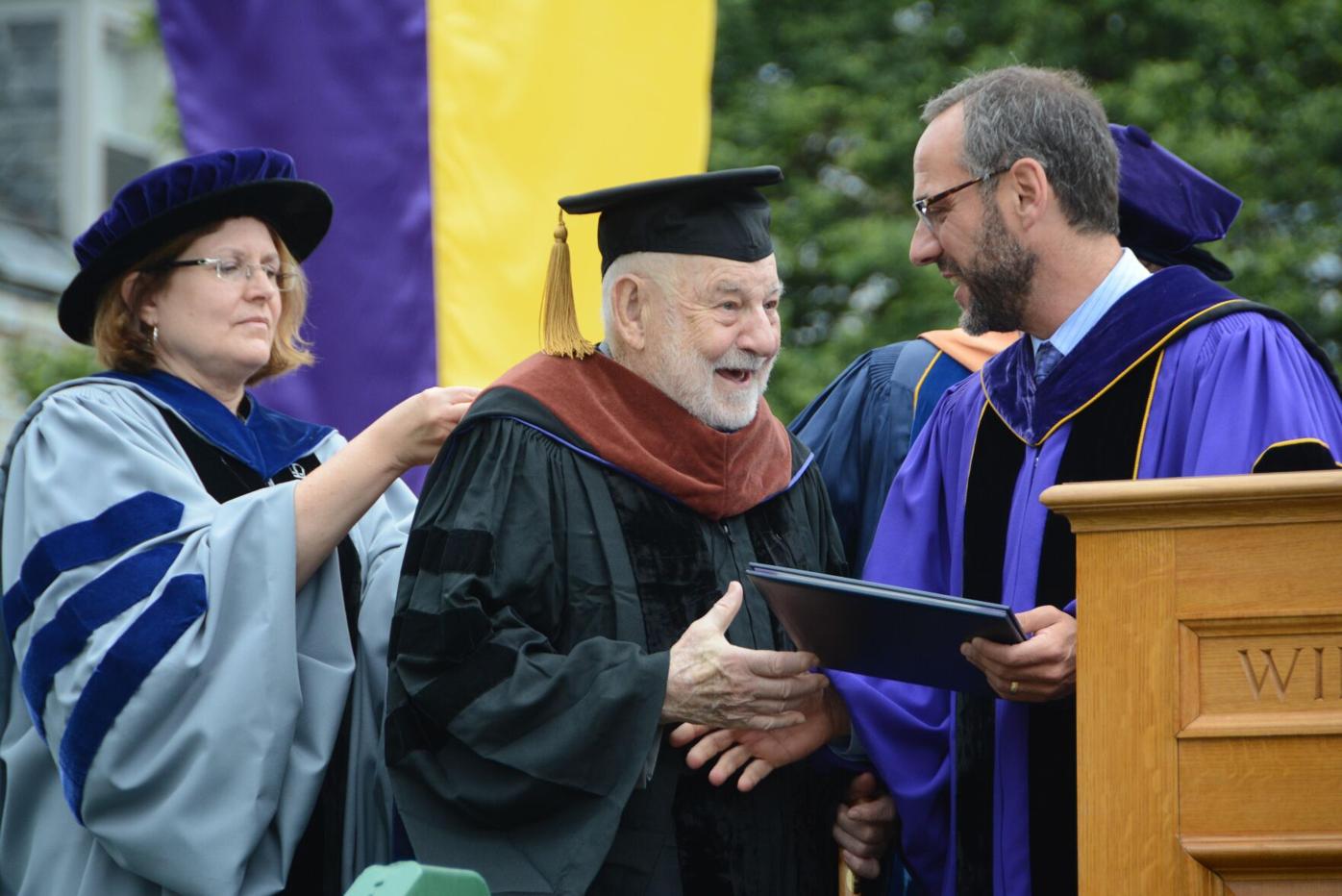 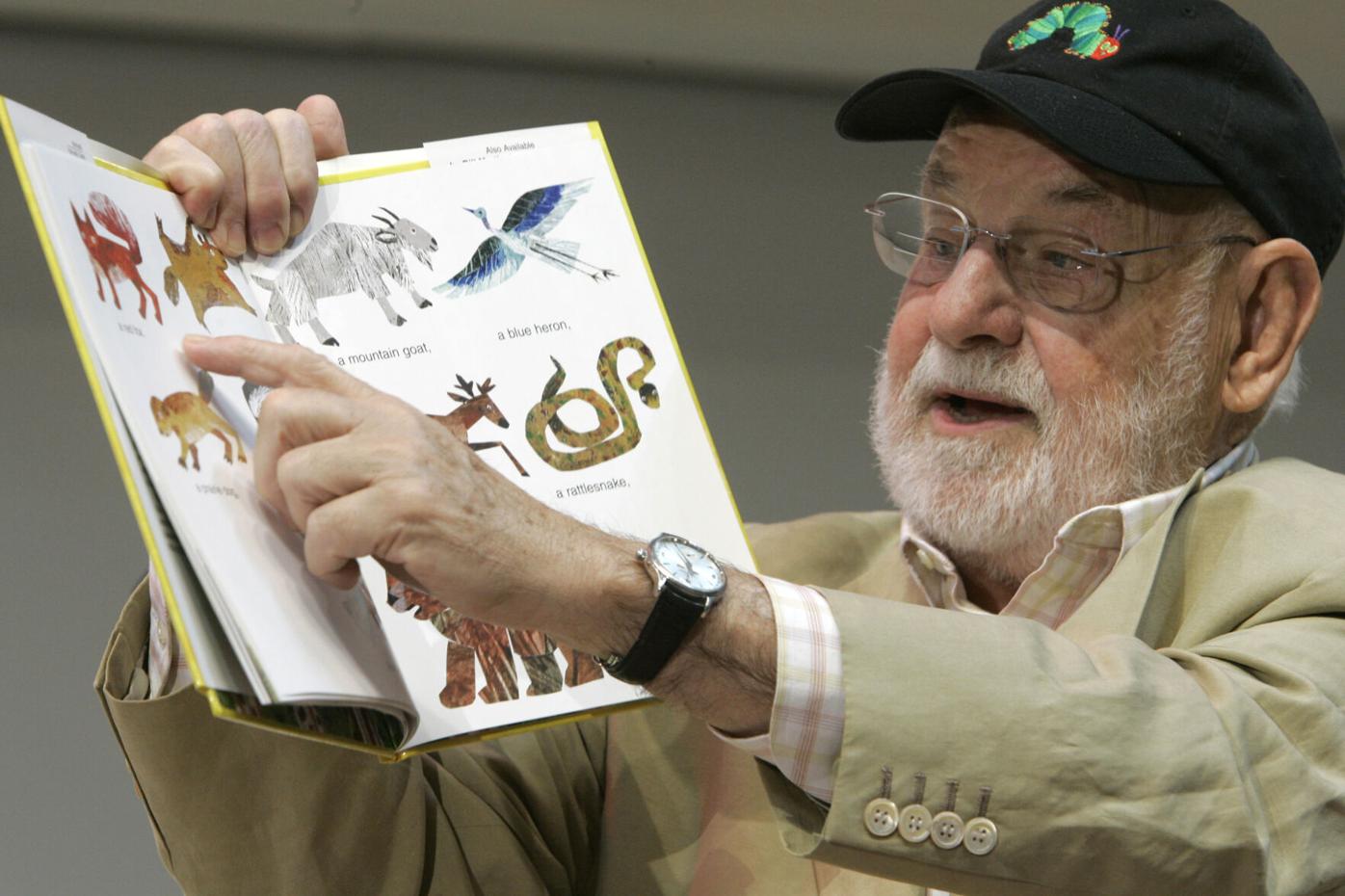 Illustrator Eric Carle reads from "Baby Bear, Baby Bear, What Do You See?" on Oct. 1, 2007 in New York. The beloved children’s author and illustrator whose classic works gave millions of kids some of their earliest and most cherished literary memories, has died. Carle was 91.

Illustrator Eric Carle reads from "Baby Bear, Baby Bear, What Do You See?" on Oct. 1, 2007 in New York. The beloved children’s author and illustrator whose classic works gave millions of kids some of their earliest and most cherished literary memories, has died. Carle was 91.

Artist and author Eric Carle's colorful, hungry caterpillar crawled into the hearts of children across the country and in the Berkshires, where many considered the Western Massachusetts' resident one of their own.

Carle — whose best known book “The Very Hungry Caterpillar,” sold more than 55 million copies around the world since it was first published in 1969 — died Sunday at his summer studio in Northampton. He was 91. The illustrator and author of other famous works such as "Brown Bear, Brown Bear, What Do You See?" and "The Very Busy Spider" left his mark in more ways than one in Western Massachusetts, most notably The Eric Carle Museum of Picture Book Art in Amherst. In 2016, Carle was awarded an honorary degree from Williams College.

In 2000, Carle's work was exhibited at The Massachusetts Museum of Contemporary Art's Kidspace in "From Paper to Print," which featured 43 of Carle's original illustrations, hand-painted papers and storyboards. The exhibition provided a glimpse into Carle's artistic process.

Williamstown author and a National Book Award finalist Ali Benjamin remembers seeing Carle speak at Mass MoCA: "I went to see him talk at Kidspace at Mass MoCA. I hadn't known his personal story before, but wow. He'd seen and been through some terrible things (conscripted into the German army as a teenager during WWII, forced to dig ditches for example). All these years later, he had a spirit that was so gentle, and so soft, and so generous. It really moved me, seeing that all this beauty and goodness could exist on the far side of something so dark," Benjamin wrote in an email.

Springfield may have the twisting rhymes of Dr. Seuss, but the Berkshires has its share of colorful characters brought to life by local childr…

For Kirsten Rose, former children's librarian and now assistant director at the David and Joyce Milne Public Library in Williamstown, the significance of Carle's work is far reaching in children's literature.

"It's hard to overstate the importance of Eric Carle to the world of children's literature," she said. "Almost every family has read 'The Very Hungry Caterpillar' to their kids at some point. He had a way with words — using simple language to convey his stories. And his illustration style is iconic and instantly recognizable with its bright colors and strong shapes."

Carle published more than 70 picture books over his career, many of which were popular picks at story times across the county.

"Eric Carle’s life is a life to be celebrated! Generations of children, parents and teachers have benefited from the work of this extraordinary artist," Jenney Maloy, youth librarian at the Lenox Library, wrote in an email. "Eric Carle books should be a foundation for any youth collection. The simple, repetitive, and yet compelling storylines are just what young children need on their journey to reading. These gentle stories are comforting to children. His collage artwork is vibrant and accessible. Any child with paper and a glue stick can create like Eric Carle. As someone who has led countless story times, I’ve discovered over and over that an Eric Carle book enchants young audiences. Thank you, Eric Carle!"

"My favorite Eric Carle book is 'From Head to Toe' because it is a blast to use in story time," she wrote in an email. "Each page is filled with repetition that allows young readers to predict what comes next in the story while the animal movements encourage whole body participation. I think that children connect to Eric Carle because his work expresses a playfulness they naturally possess. Mr. Carle's playful use of rhythm and repetition brought to life unexpected characters, like crickets and hermit crabs. The inexact way Mr. Carle used crooked lines, asymmetrical images, scribbles, colors and texture in his illustrations is notably similar to the artwork of children."

Carle's books, according to Benjamin, held up across the generations. "Values change, tastes change, what and how we communicate with kids shifts a little. But Carle's books hold up, and brilliantly. ... He was just a wonderful gift to the world. I'm so sad about his passing, and simultaneously so grateful for his life."