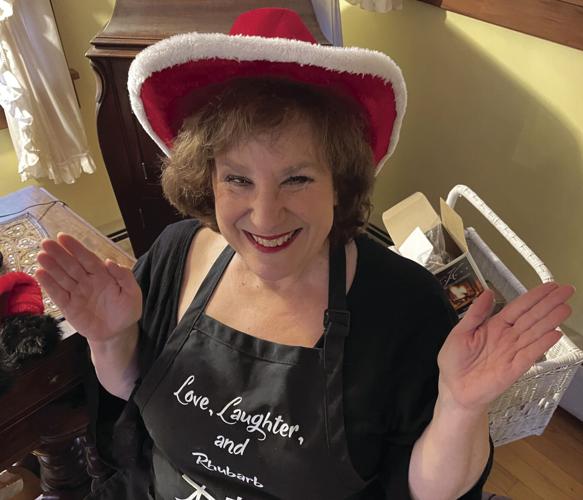 Tinky Weisblat is the author of several cookbooks, including "Love, Laughter and Rhubarb." Her newest cookbook, "Pot Luck: Random Acts of Cooking" offers up holiday recipes. 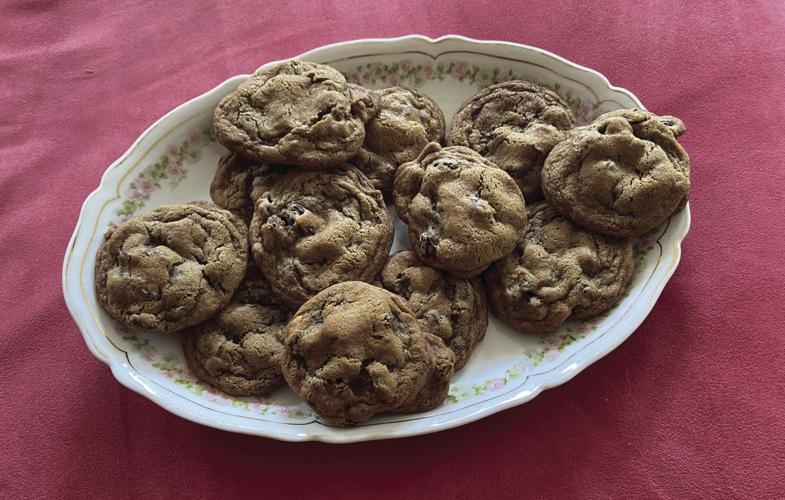 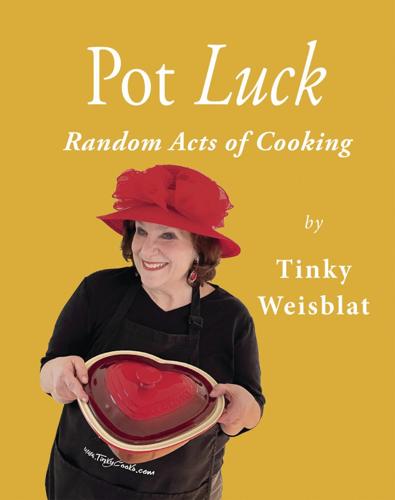 Tinky Weisblat is the author of several cookbooks, including "Love, Laughter and Rhubarb." Her newest cookbook, "Pot Luck: Random Acts of Cooking" offers up holiday recipes.

PITTSFIELD — Writer, singer and historian Tinky Weisblat is all about the holidays — and not just the ones coming up.

Weisblat’s latest cookbook, “Pot Luck: Random Acts of Cooking,” published in October, celebrates seasonal foods and holidays, through recipes and stories with a bit of history thrown in the mix. And let’s not forget the famous people she added, from George Washington to Susan B. Anthony to Dolly Parton.

“When the pandemic began, I was writing a cookbook on foods that are served following funeral services,” Weisblat, of Hawley, said during a recent phone interview. “The idea was so depressing during the pandemic. A friend suggested that I write about things that make me happy. Hence, the name ‘Potluck.’ It’s a mish-mash, but I have a good one — as most potlucks are and should be. Sometimes I wrote about things I wanted to explore and hadn’t explored. They were recipes and topics I hadn’t delved into. Some I had written through the years — and published or not.”

For the love of rhubarb: Cookbook author to sign books at festival

The cookbook follows the seasons of the year and how Weisblat structures her cooking.

“It is a combination of holidays and what food is in season,” she said, adding that in homage to her singing career, there are “intermezzos between the seasons” in the cookbook in which she writes about “things that are interesting to me.” In addition, there is a “musical coda” featuring musical artists like Parton and Ethel Waters.

The recipes In “Pot Luck” came from various sources.

“People always give me recipes,” Weisblat said. She adapted other cooks’ recipes to honor people, like singer Waters, whose nickname was “Sweet Mama Stringbean” and who is remembered in “Pot Luck” with a recipe for Sweet Mama’s Stringbeans.

Some of the recipes are Weisblat’s creations. “I sometimes make recipes up. Some are good, and some are not, but usually my instincts are good.”

Her favorite recipes in the cookbook are the string bean recipe, Maple-Baked Feta ("It’s different and fun.”) and Brussels sprouts salad (“I use fresh Brussels sprouts. They’re good for both Thanksgiving and Christmas.”)

“Make everything as simple as possible and make things that can be made in advance — like soups, stews or pot roast, and serve them with bread and a nice salad, so you can be with your guests,” she said. “Make it easy on yourself.”

In addition, she advised, limit what you’re doing, like a dessert party. “It’s easy and the point is to be with people and not get carried away.”

“It’s a great read,” Weisblat said in closing. “Whether you’re interested in a wider variety of topics, especially film, music and TV. I try to keep things light and funny. Just because it was written during a pandemic doesn’t mean it has to be depressing. The recipes, in general, are easy and delicious.”

“Pot Luck: Random Acts of Cooking” is available at The Williams Bookstore in Williamstown, tinkycooks.com or Amazon.com.

DUMPLINGS FOR THE LUNAR NEW YEAR

This recipe is a little more complicated than most of the ones in the book, but it’s one of Tinky’s favorites. The flavor and texture of the dumplings make the effort worthwhile.

1/2 cup finely chopped cabbage (preferably Chinese cabbage, but any cabbage will do in a pinch)

For the dipping sauce:

1 scallion, chopped (white plus some green)

24 wonton or dumpling wrappers (possibly even more, depending on how big they are)

canola or peanut oil as needed for frying

For each dumpling, spoon about 1 teaspoon of the filling into the center of a wrapper.

Do not overfill your dumplings.

Combine the egg and the water to make an egg wash. Use your finger to coat the edges of the wrapper with a bit of the egg wash. Fold the wrapper in half diagonally to cover the filling, and seal carefully with more egg wash. Put the filled dumplings on a plate or board, and cover them with a damp paper towel.

Pour enough oil into a nonstick skillet to cover the bottom, but barely. Heat the oil over medium heat until it shimmers. Add a layer of dumplings. The dumplings should not touch each other in the pan.

Cook until the dumpling bottoms begin to brown; then flip them over and brown them lightly on the other side. Reduce the heat to low, and add a splash of water (about 1/4 to 1/3 cup). Watch out for splattering when the water hits the oil.

Makes a lot of dumplings. (Tinky’s family eats them too fast for her to count!)

Tinky was inspired to make this pizza by the flavors of a classic quiche Lorraine. If you want a lighter pizza or are serving vegetarians, brown the onion in extra-virgin olive oil instead of bacon fat. (Add a small amount of salt and pepper when you add the apple and garlic.)

A couple of hours before you are ready to make the pizza, take your pizza crust out of the refrigerator (if you are using a commercial crust; if your crust is homemade, it won’t need warming), place it on a greased baking sheet, and let it rest.

After an hour and a half or so, preheat the oven to 475 degrees, lightly grease the baking sheet, and stretch the crust out on top. To be careful, you may want to line the baking sheet with parchment, foil, or silicone.

In a large skillet fry the bacon pieces. Remove them from the pan and place them on paper towels to drain. Set aside. Leave enough of the bacon fat in the pan to cover the bottom of the pan lightly. (You won’t need the rest of the bacon fat.) Toss in the onion slices, and cook them over low heat until they begin to caramelize (probably 20 minutes to 1/2 hour).

Throw in the garlic and the apple chunks and cook the mixture until the apples begin to soften, about 5 minutes. Remove the pan from the heat. Lightly oil the pizza crust. Sprinkle most of the cheese onto it.

Arrange the onion mixture on top (it won’t make a heavy topping), followed by the rest of the cheese. Bake the pizza until it looks done, 10 to 14 minutes. While the pizza is baking, chop the chives. When the pizza comes out of the oven, sprinkle the bacon pieces and the chives on top. Let the pizza rest for a minute or two; then slice it. Serves 4 as a main course or 8 as an appetizer.

3/4 cup chopped walnuts, or more raisins if you don’t like nuts

Preheat the oven to 375 F and line cookie sheets with parchment or silicone.

Cream together the butter and the brown sugar. Add the egg and beat well. Beat in the coffee, the baking soda, the spices, and the salt. Stir in the flour and the water alternately, beginning and ending with the flour. Add the raisins and the nuts (if you are using the latter).

Drop spoonsful of batter 2 inches apart onto the prepared sheets. Bake for 10 to 12 minutes. Your yield will depend on the size of your cookies. I used a 2 tablespoon cookie scoop will yield about 2 dozen cookies.

If you're looking for a showstopper cookie to bring to the party, try these delicious seasonal cookies that come out beautifully laminated, almost like a pastry.