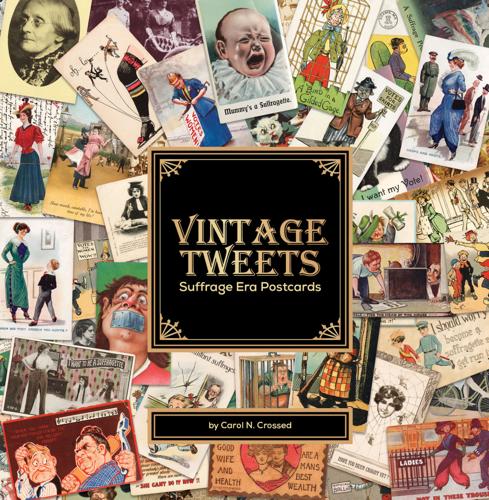 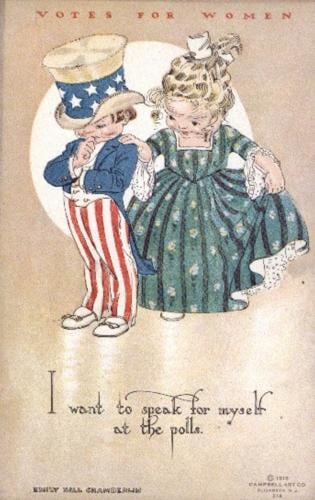 The back of this card indicates it was produced and circulated by the National Woman Suffrage Publishing Co. The front information indicates they were produced by the Campbell Art Co., Elizabeth, N.J., in 1914 and 1915. 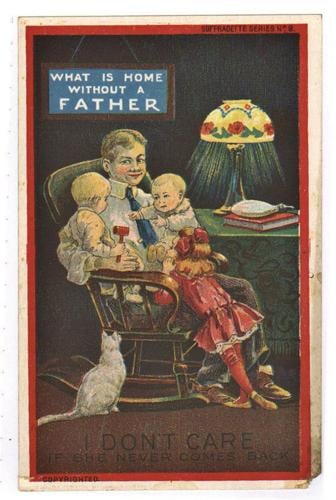 This anti-suffrage postcard by the Dunston-Weiler Lithograph Co. features a father at home with his children. The mother is assumed to be out at a women's suffrage meeting. It reads: "What is home without a father" and further down, "I don't care if she never comes back."

The back of this card indicates it was produced and circulated by the National Woman Suffrage Publishing Co. The front information indicates they were produced by the Campbell Art Co., Elizabeth, N.J., in 1914 and 1915.

This anti-suffrage postcard by the Dunston-Weiler Lithograph Co. features a father at home with his children. The mother is assumed to be out at a women's suffrage meeting. It reads: "What is home without a father" and further down, "I don't care if she never comes back."

ADAMS — If the U.S. women's suffrage movement was happening today, would its members use Twitter to promote the cause?

Author Carol Crossed believes they would have. So much, in fact, she named her newly released book of suffrage-era postcards, "Vintage Tweets."

Crossed, president of the Susan B. Anthony Birthplace Museum's board of directors, drew comparisons between the two mediums during a recent interview at the East Road museum.

"The postcard [message] was meant to be very snappy and quick and not a lot of heavy duty thinking, so you had to use as few words as possible to get a point across," she said.

While the majority of the postcards, culled from her own collection of 650 pieces (many of which are now on display at the museum), feature mundane handwritten messages, it's the illustrations and images on the front of the postcards that carried the anti- or pro-suffrage sentiments of the sender.

"They lent themselves to sarcasm, comedy and exaggeration — by over-making a point, you make a point, and that's so much what these cards do," she said.

In fact, those postcard illustrations aren't very different from today's internet memes — both are images accompanied by commentary or catchphrases that are spread rapidly through media.

And it was how the two sides of the U.S. women's suffrage movement used postcards to spread their messages that inspired Crossed to publish a book of color images that examines just that, as well as how the suffrage movement intersected with other social movements of the day, including temperance and abolition.

"They really tell a story in a different way then you can get from reading a book," she said.

That story, women's struggle to gain the right to vote (in the U.S.), lasted over seven decades before the ratification of the 19th amendment, also known as the Susan B. Anthony Amendment, on Aug. 18, 1920. The amendment became law on Aug. 26, 1920, when it was officially certified and adopted. Anthony, co-founder and president of the National Woman Suffrage Association, died in 1906.

The book shares postcards from both sides of the aisle, broken up by theme or type. Each section also includes a detailed introduction explaining how certain images were used and by what organization.

One of the anti-suffrage postcards included in the book features an illustration of a rooster that reads: "My old woman wants to wear the spurs!" Another, by the Dunston-Weiler Lithograph Co., of a father sitting in a rocking chair surrounded by his children, implies the mother has abandoned her family to attend a women's suffrage meeting. It reads: "What is home without a father" and further down, "I don't care if she never comes back."

Pro-suffrage postcards, such as ones circulated by the National Woman Suffrage Publishing Co., typically used illustrations of cherub-faced children, often in patriotic-themed situations or clothing, with messages such as: "I want to speak for myself at the polls" or "She's good enough for me!"

"Cupid was sort of the most endearing childlike figure. Of course, the pro-suffragists wanted to take away the fear and trepidation, so they used children to promote the cause," Crossed said. "Most of the endearing illustrations are pro-suffrage. Angry cats are a feature of the anti-suffrage people. The illustrations are very creative and [in some cases] very violent. There was a great deal of hostility."

Violent images include depictions of domestic violence — men with black eyes and women holding rolling pins or pans ready to strike. But the most brutal of the violent images, printed for the American market but produced in Germany, show women with their mouths muzzled, clamped shut or their tongues nailed to posts.

"Theses are quite startling. The interplay of suffrage and temperance was poignant in the sense that the temperance association was very active and there was a certain intersectionality there," Crossed said. "The anti-prohibitionists were opposed to suffrage because they feared, and rightly so, that if women got the vote, they would outlaw liquor. One of the very active anti-prohibitionists were the [United States] Brewers Association — and this was a German [immigrant-owned] conglomerate that supported the beer industry. I drew the conclusion, I don't know for sure, but that hostility could be the intersection of temperance and suffrage."

The postcards, she said, also show how the various social and civil movements played off one another.

"The causes that were so important to women, such as temperance, such as abolition, they really cried out for support for the suffrage position because these were laws that weren't going to be changed by hearts," Crossed said. "There was a large contingent of abolitionists that believed if people just understood that the slaves were human beings that their hearts would change and slavery would be abolished ... Of course, the suffragists knew that wasn't going to work, that you need laws. They were very active in getting state legislatures to support the ratification of emancipation.

The book's release date, Crossed said, was timed to coincide with the kick-off of the year-long National Women's Suffrage Centennial on Monday — Women's Equality Day. The celebration, will not only mark the 100th anniversary of the 19th amendment in 2020, but also the 200th anniversary of Anthony's birth on Feb. 15, 1820.

All proceeds from book sales will support birthplace museum programs.