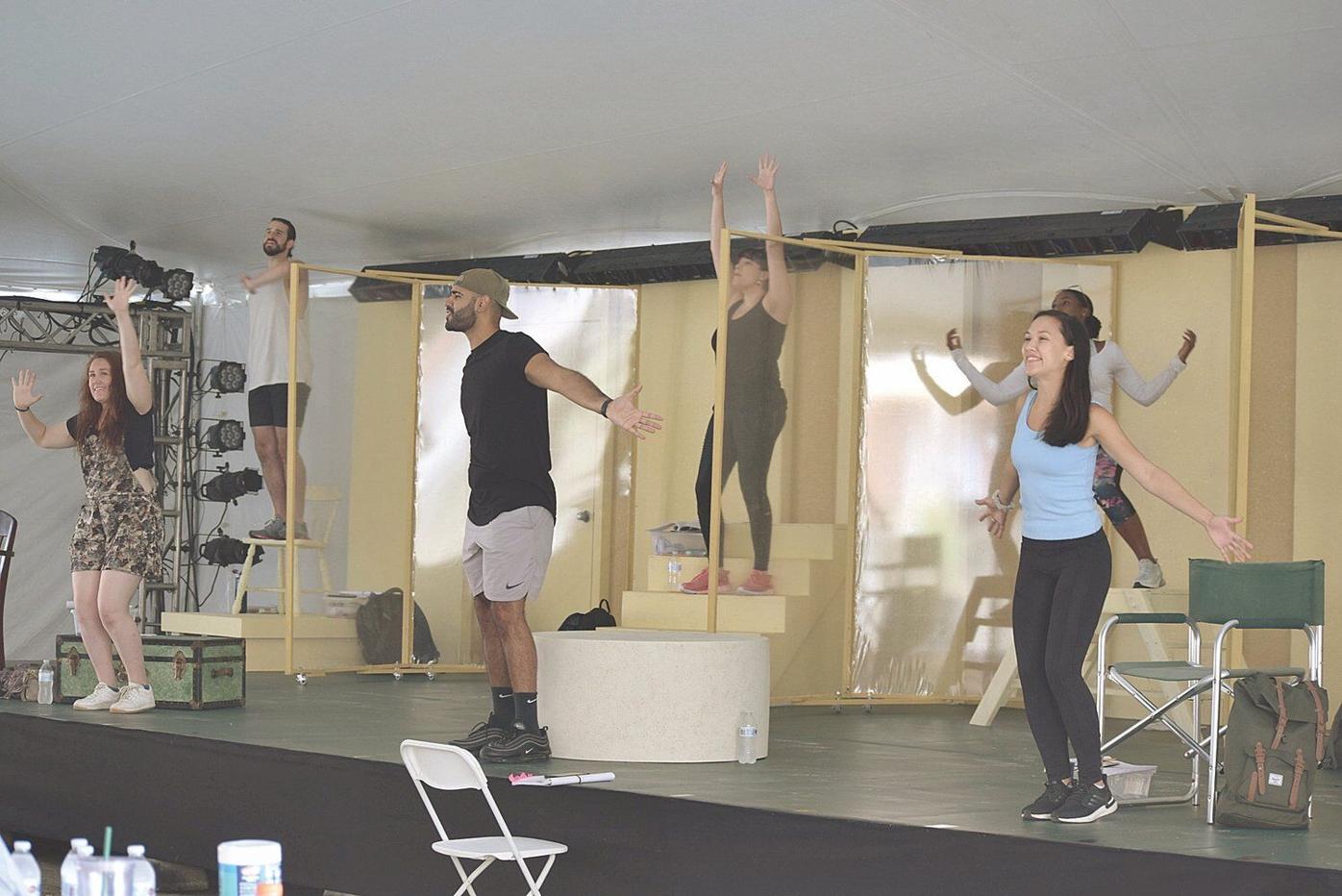 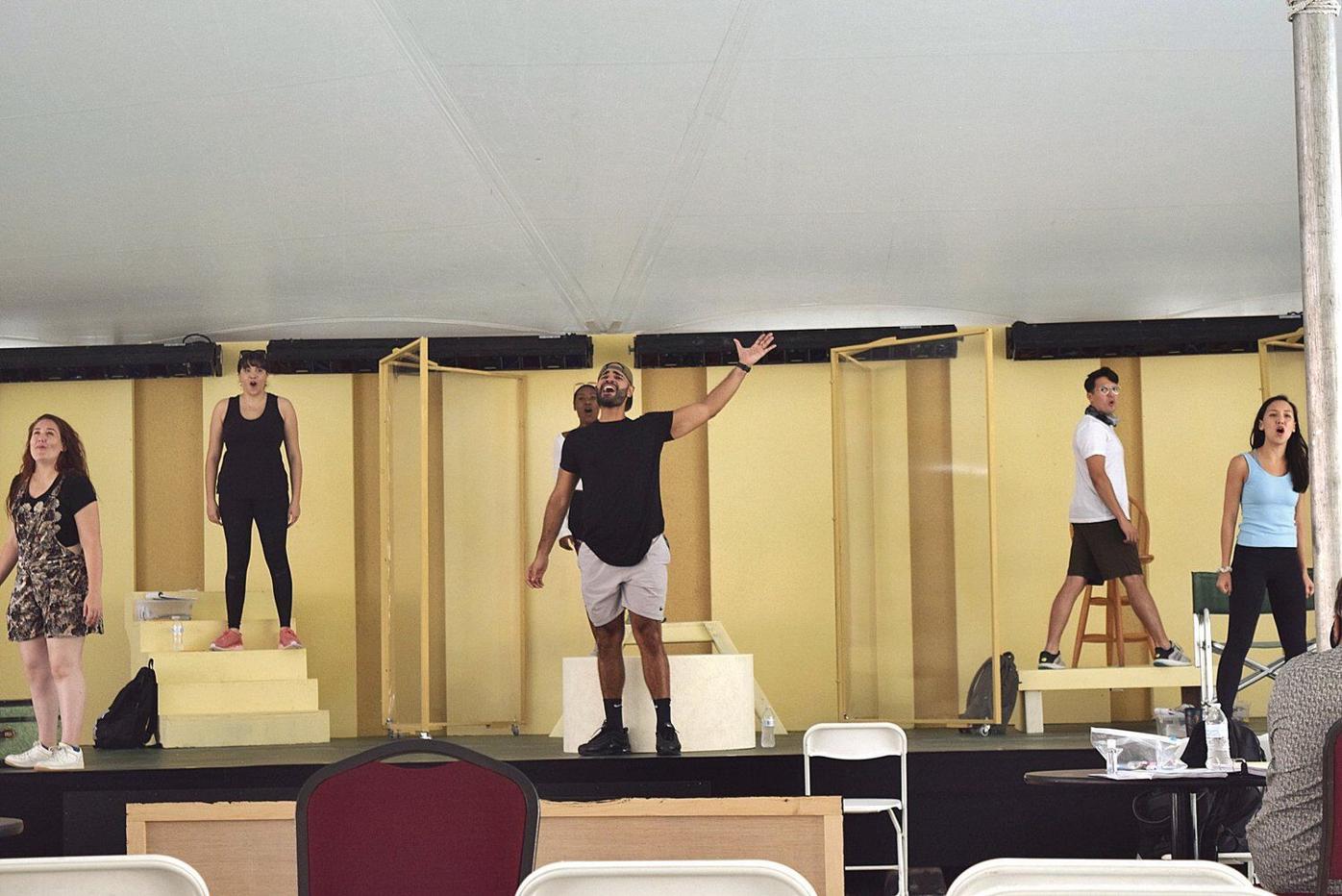 PITTSFIELD — The way Berkshire Theatre Group Artistic Director Kate Maguire sees it, these times are exactly right for a revival of the 1971 musical, "Godspell." That's why when concerns over COVID-19 forced Maguire to reduce and reshape BTG's 2020 summer season, "Godspell" was the sole survivor.

Originally scheduled to begin performances July 31 in the Fitzpatrick Main Stage in Stockbridge, "Godspell" now begins performances Thursday in an open-air tent in the parking lot adjacent to the Colonial Theatre at 111 South St., where it is scheduled to run through Sept. 4. Press opening is Friday.

Inspired by the Gospel According to Matthew, John-Michael Tebelak and Stephen Schwartz's modern dress pop-folk-rock setting of the parables is a story "about people in conflict coming together to figure out who, what, when, why we're here and this fantastic figure comes along to help them figure it out.

"It is epic and existential. It became clear that 'Godspell' is the one show that had to be done," MGuire said in a socially distanced interview on the porch of BTG's Thaddeus Clapp House on Wendell Avenue. She was joined by the production's director, Alan Filderman, and choreographer Gerry McIntyre.

"Alan, Gerry and I have worked together over 26 years," Maguire said. "I can't imagine doing this with anyone else."

It almost didn't happen. With Broadway theaters closed and national tours grinding to a halt because of the coronavirus pandemic, theaters in the Berkshires, like regional theaters nationwide, were adjusting their schedules — postponing, truncating, eventually canceling altogether. In the Berkshires, BTG and Barrington Stage Company rescheduled and reprogrammed their respective seasons.

In early May, Maguire said in a separate, earlier interview, the union representing theater actors and stage managers, made clear that it was not going to authorize live productions, especially indoors.

"We were getting things under control [with regard to COVID-19] in Berkshire County," Maguire said, "which meant we could perhaps [do something]."

There followed an extensive series of separate discussions between Actors Equity and BTG and Barrington Stage, during which, Maguire said, the union leadership issued its "Four Principles" — conditions the theaters would have to satisfy — which provided the framework for continued discussion.

"At first, it was a maybe," McIntyre said. "Then a definite 'no' from Equity; then a glimmer of hope. Then it happened."

Necessity, it has been said, is the mother of invention. Filderman knows first-hand what that means.

Originally designed for BTG's indoor 314-seat Fitzpatrick Main Stage, Filderman, his designers and McIntyre have had to reconceive their production for an open-air tent with a 100-person capacity, including an audience of 75, three musicians, and a youthful cast of 10.

"If you're told you have to tell this story in a way very different than the usual story theater storytelling method, which involves, in this case, a lot of audience participation, then you adjust," Filderman said. "You tell the story without, for example, exiting and entering through the audience."

The actors will not "play" with audience members during various musical numbers. The audience won't be invited to go onstage and share "wine" with the actors during intermission.

The musicians — keyboard, percussion, guitar — will be offstage in a space of their own. The stage is 48-feet wide so that, Filderman said, "we'll have everyone distanced."

Most of Filderman's movement and McIntyre's choreography involves movement in place; actors "alone in their space," Filderman said; positioned behind any one of four sliding, folding, see-through panels.

"There will still be a lot for us to see and learn," Filderman said.

"The union says no lifts, no touching," McIntyre said. "So, the job for me is ... to make (the choreography) work and be glorious."

Filderman said his take on "Godspell" is very much "right here; right now."

"It is about this particular group of actors who have come here to do this play," Filderman said. "It will be these 10 people here in Berkshire County who have been through the most bizarre four months in their lives. This is where we need each other's help."

So, rehearsals were moved to a large room at Clapp House and the nearby Colonial Theatre.

The stakes are high, especially when it comes to the safety of everyone involved in this production, from beginning to end, and the audience. Moreover, McIntyre said, "there's a lot of people coming to look and judge. The union, for example, is looking at us. We have choreography Zoom meetings every week. This is the wildest roller coaster ride I've ever had in my career.

"I feel incredibly responsible to get this right for Berkshire County, which I feel is the premiere cultural area of the country," Maguire said. "We want to keep the county safe as it moves, inch by inch, back to its cultural vitality."

"My hope is that this will be (an object) lesson," Filderman said. "We're going to show that people coming together for theater is possible."

He paused for a moment, Then, "I also want 75 people to have a good time."