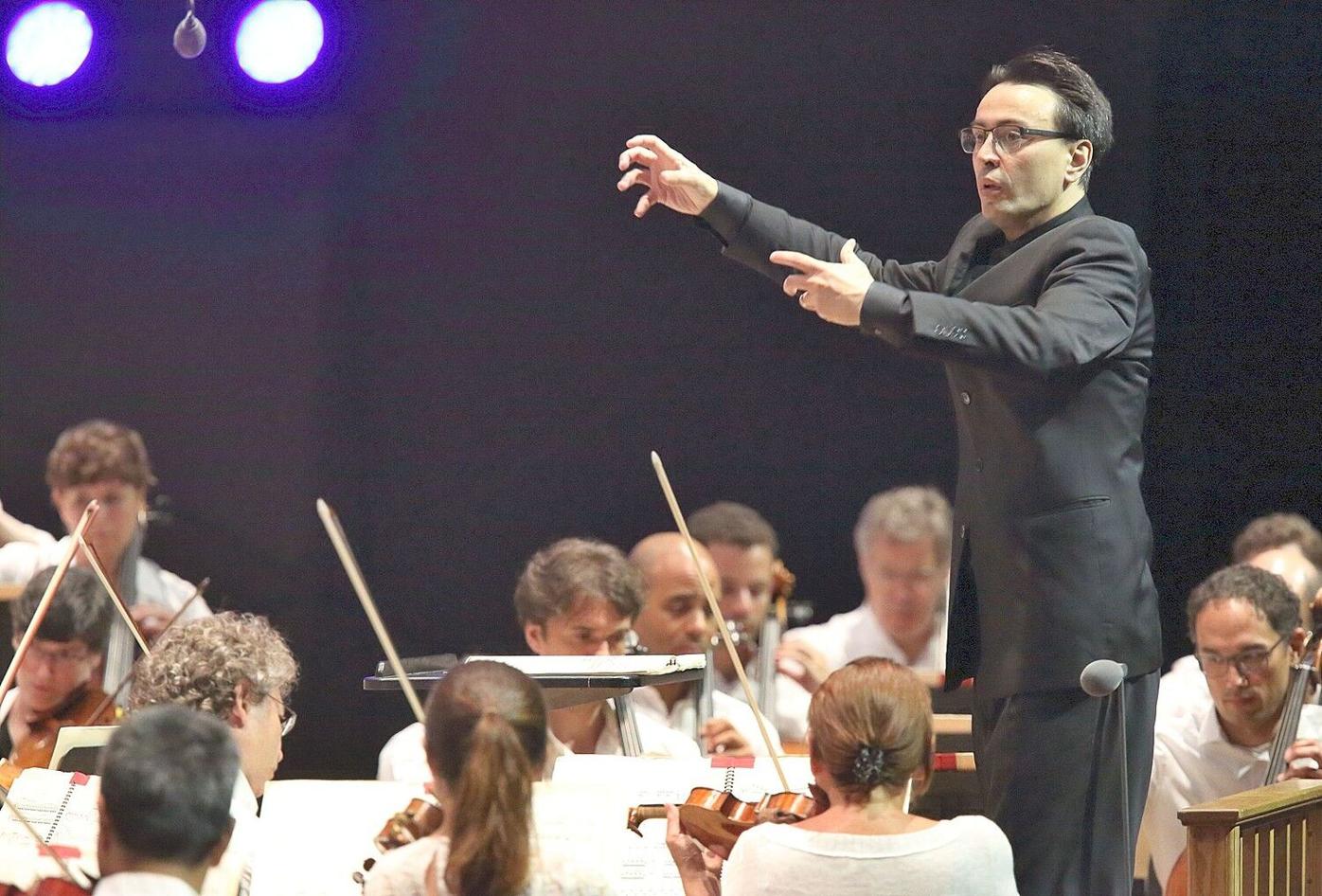 Ken-David Masur conducts the Boston Symphony Orchestra on Friday in the Koussevitzky Music Shed at Tanglewood. Masur led the BSO through an all-Russian program. 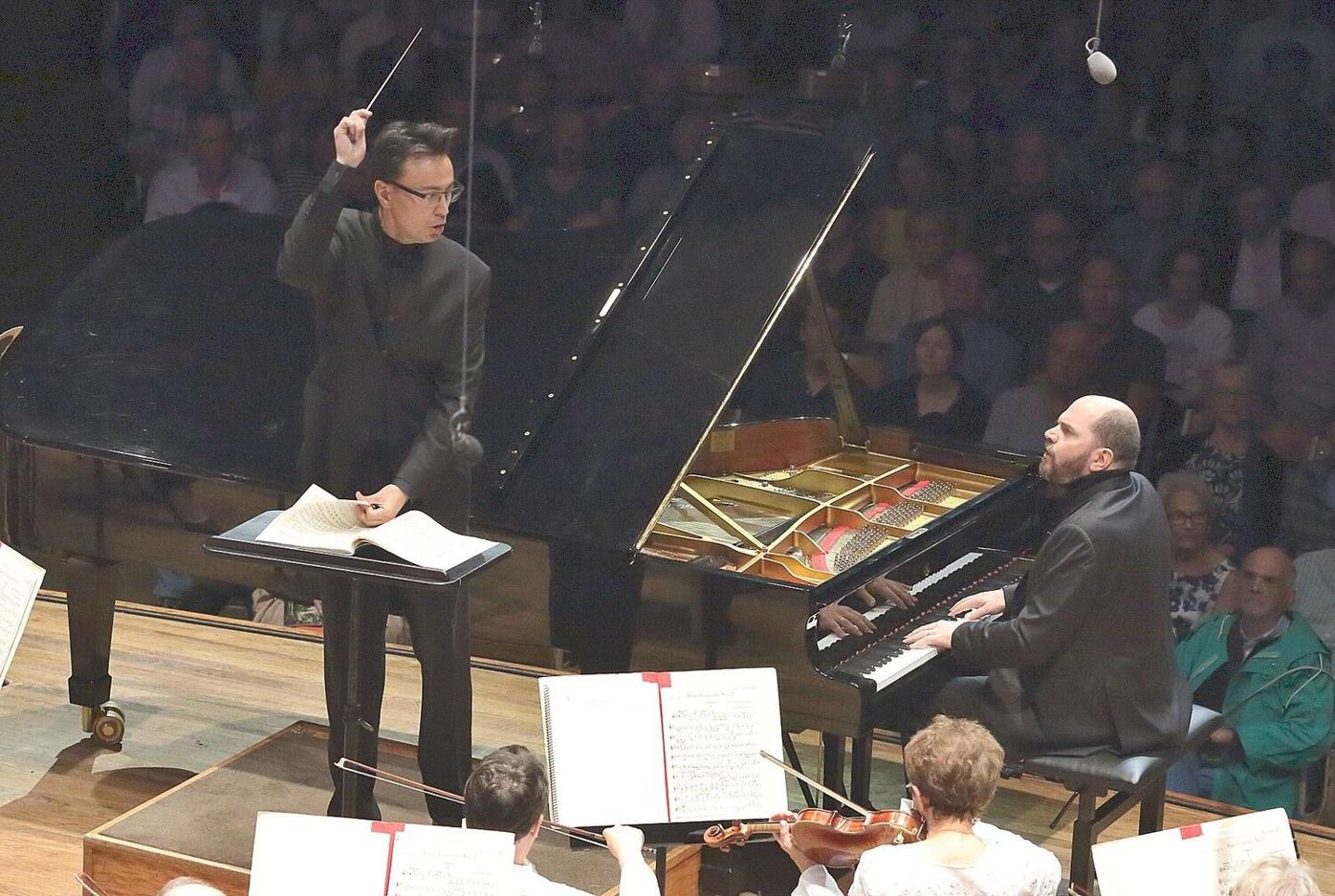 Pianist Kirill Gerstein, the 2018 Koussevitzky Artist, performs with the Boston Symphony Orchestra in The Shed at Tanglewood on Friday evening. Gerstein is an alum of the Boston University Tanglewood Institute.

Ken-David Masur conducts the Boston Symphony Orchestra on Friday in the Koussevitzky Music Shed at Tanglewood. Masur led the BSO through an all-Russian program.

Pianist Kirill Gerstein, the 2018 Koussevitzky Artist, performs with the Boston Symphony Orchestra in The Shed at Tanglewood on Friday evening. Gerstein is an alum of the Boston University Tanglewood Institute.

LENOX — It was anything but a grand night for concertizing at Tanglewood on Friday following a late-afternoon deluge that decimated a potential lawn crowd and left the Shed stifling and sweltering.

Nevertheless, under the skillful leadership of associate conductor Ken-David Masur, abetted by the dazzling pianism of Kirill Gerstein, an alum of the Boston University Tanglewood Institute, the Boston Symphony smoothly navigated through an all-Russian program of mostly familiar territory.

Some well-seasoned concertgoers might look askance at yet another sprint through Rachmaninoff's well-trodden warhorse, the Piano Concerto No. 2 that was his breakthrough hit after years of therapy to treat composer's block and eroded self-confidence.

But the Russian-born Gerstein, in residence for four performances as this season's designated Koussevitzky Artist honoring his lasting impact on music and education here, avoided sentimentality and show-off pyrotechnics. Instead, he delved into the lyricism and heartfelt emotion that characterizes this melodic, intensely romantic concerto — no wonder Rachmaninoff dedicated it to the psychiatrist he saw daily for four months in 1900, often under hypnosis to cure depression.

The good doctor obviously cast an inspirational spell, and Gerstein certainly displayed his considerable technical prowess in the hard-driving outer movements, as Masur and the BSO kept pace, occasionally at a headlong gallop but always in control. The tender tranquility of the adagio, sustained (sostenuto) as the score demands, was especially bracing.

All in all — even for those of us who have heard this work since the 1950s when it was especially ubiquitous, thanks to popular songs and cameos in at least nine movies — this was a performance that made it seem like a welcome return guest — especially during the delicate interplay between the BSO's storied wind sections and Gerstein's hushed keyboard.

Stravinsky's first ballet, "The Firebird," composed when he was 27, is usually heard in one of the three concert suites he fashioned in 1911, 1919 and 1945, but the complete 50-minute score is less often encountered. Even though the self-critical Stravinsky denigrated the ballet music as "too long and patchy in quality," that's not on point, especially in the scintillating performance delivered by Masur and the BSO.

The 1910 score, commissioned by the impresario Sergei Diaghilev for Ballet Russes in Paris, with frequent excursions into Russian folklore, interweaves pictorial passages to illuminate the mimed story line for Michel Fokine's choreography with the famous highlights incorporated into the suites.

Masur, who seems destined for a major music directorship, steered the orchestra through a piquant journey through those magical, dreamlike passages while summoning up the full resources of the expanded orchestra (three harps, piano, celesta, massive brass, woodwinds and percussion) for the famous Infernal Dance and the triumphal General Rejoicing.

It's worth noting that just before the curtain-raiser, Glinka's "Ruslan and Ludmilla" overture, the BSO offered pre-performance commentary by its esteemed English horn principal, Robert Sheena. This was part of the Underscore Friday series, three outings this season, featuring orchestra musicians introducing their instruments and the program for the audience.

Sheena offered an especially illuminating, well-written presentation, pointing out that the British call his instrument, part of the oboe family, the "cor anglais," (apparently preferring to sign over ownership to the French) while some wags label it the "anguished horn" because composers often assign it a plaintive, melancholic theme.

These audience-friendly initiatives are encouraging, helping to break down the mystique and the unjustified "elitist" image too often assigned to classical music by those who haven't experienced it.