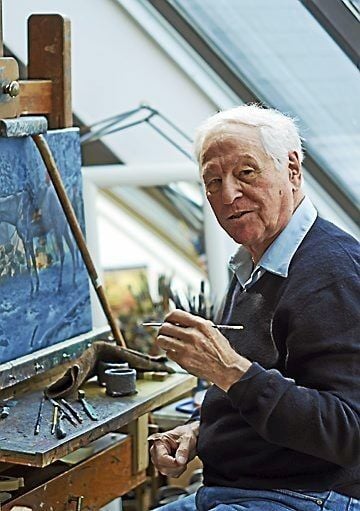 At 83, artist Mort Kunstler, seen here earlier this year in his studio, still works hard and is on the road constantly for art openings and book signings.

Mort Kunstler's historical paintings, most of them depicting epic events in American history, occupy a central place in a major retrospective exhibition, "Mort Kunstler: The Art of Adventure," at the Norman Rockwell Museum in Stockbridge through March 8. 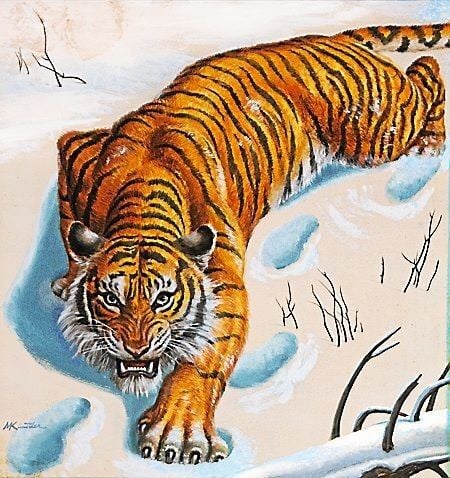 Mort Kunstler's illustration for the poster for the 1943 Western, "The Kansan." 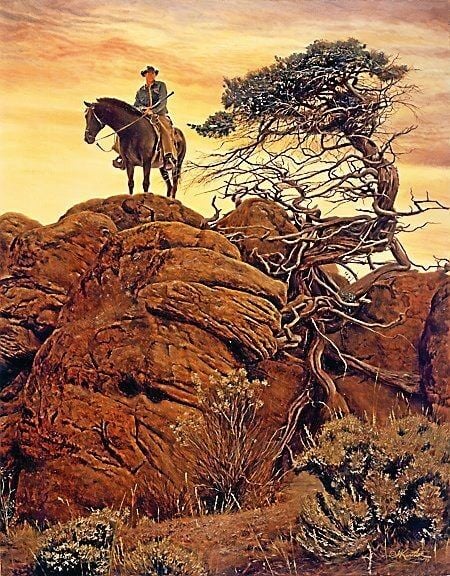 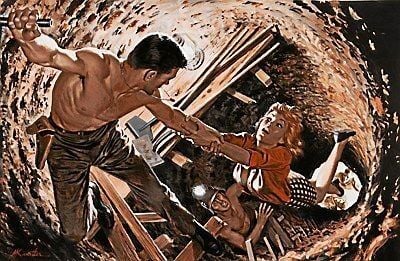 At 83, artist Mort Kunstler, seen here earlier this year in his studio, still works hard and is on the road constantly for art openings and book signings.

Mort Kunstler's historical paintings, most of them depicting epic events in American history, occupy a central place in a major retrospective exhibition, "Mort Kunstler: The Art of Adventure," at the Norman Rockwell Museum in Stockbridge through March 8.

Mort Kunstler's illustration for the poster for the 1943 Western, "The Kansan."

STOCKBRIDGE >> Mort Kunstler built a half-century art career on coincidence. His rise from pulp magazines, to movie posters, to National Geographic images, to fine art prints and paintings was driven less by foresight than by happenstance.

"It sounds like I gave it a lot of thought," he said in a phone interview from his Oyster Bay, N.Y. studio, "but I didn't. So much was coincidence and luck."

That isn't to say it was easy, he emphasized, pointing to the long hours, constant travel, hard work and inherent loneliness in following the path he did.

The output of that career is being examined in "Mort Kunstler: The Art of Adventure," at the Norman Rockwell Museum here through March 8. It ranges through nearly 100 artworks from a linoleum print he made in 1940 when he was 13 years old, to a painting done just this year.

Martin Mahoney, the museum's director of collections and exhibitions, who organized the show, said Kunstler is widely known for his painstakingly researched Civil War subjects, but what really attracted him to the artist was his pulp magazine work as a reflection of midcentury visual pop cultural. It is work, he said, that will resonate with today's young audiences raised on action blockbusters.

Kunstler's heroes, often bare chested, fight off Nazis, gangsters or blood-thirsty wildlife while also rescuing buxom damsels in scant clothing. His drawings and posters for the movies bear familiar titles like "The Godfather," "The Poseidon Adventure," and "The Hindenburg" among others.

From the start, Kunstler, 83, showed a talent for drawing that his father encouraged. Graduating from high school at age 15, he bounced among three colleges on athletic scholarships, before landing his first job as a studio assistant in a fast-paced New York illustration agency.

"I had two goals when I got out of art school," he said. " I wanted to make living painting pictures. And whatever I did, I wanted to do the best I could. "

Striking out on his own, he shared a studio with an experienced illustrator who mentored and taught him the ropes.

"I knew I was good at it," he said, "because I was flooded with work."

Television was changing the publishing landscape in the 1950s, however, siphoning advertising from magazines, many of which folded. Photos were also supplanting painted images.

Looking beyond pulp venues, Kunstler took his portfolio to National Geographic magazine, where the art director gave him an assignment on the spot.

"The same thing happened with the Saturday Evening Post," he said.

Encouraged to get into advertising, he took his National Geographic illustrations to an agency before delivering them to the magazine. They took him on.

"I didn't do anything," he said. "They did all the work and just fed me stuff." That "stuff" included action-movie posters he saw as a natural segue from men's magazines.

Some years later, Kunstler said he walked into New York's Hammer Gallery to see a friend's exhibition while carrying some of his own work under his arm. A salesman asked to look at what he had and called the manager over. He offered to take Kunstler on as an artist and eventually put him in 15 exhibitions.

In 1981, he was able to give up commercial assignments to concentrate on historical paintings — particularly epic events in American history like the fall of the Alamo and Custer's last stand.

It was to commemorate 125th anniversary of the Battle of Gettysburg in 1988 that he visited the Pennsylvania battle site and stopped at a gallery whose owner published Civil War prints.

"He knew my name," Kunstler said," and made me an offer for the finished [battlefield] painting."

The offer was equal, he said, to what he would make on a sold-out edition of 750 prints. He took it, the prints sold, and the gallerist gave up his art business to focus on publishing prints based on Kunstler's work

"The prints took on a life of their own," the artist said.

His oil paintings, finely detailed and peopled with dozens of characters, look to be done by a different hand than his pulp illustrations, which tend toward hard-edge realism.

Unlike Norman Rockwell, whom he admires, Kunstler makes up his characters, except for famous ones like Abraham Lincoln and Robert E. Lee. Rockwell worked slavishly from models and photographs.

He said he doesn't see anyone in today's digital marketplace doing the kind of hands-on illustrations he used to do — or even knowing how.

"I outlived them all," he said.