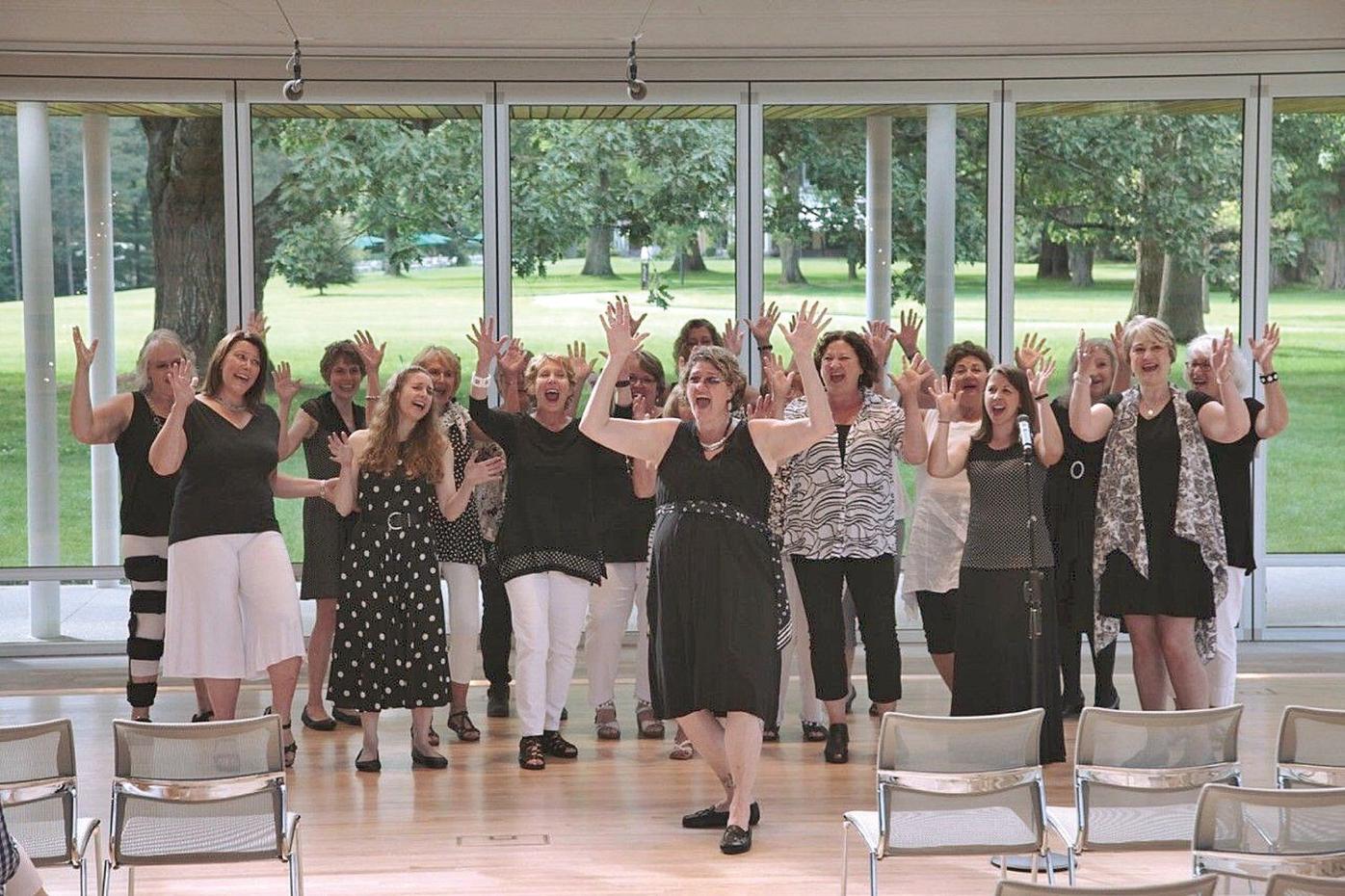 Chorus members are not required to read music, but must be able to carry a tune. 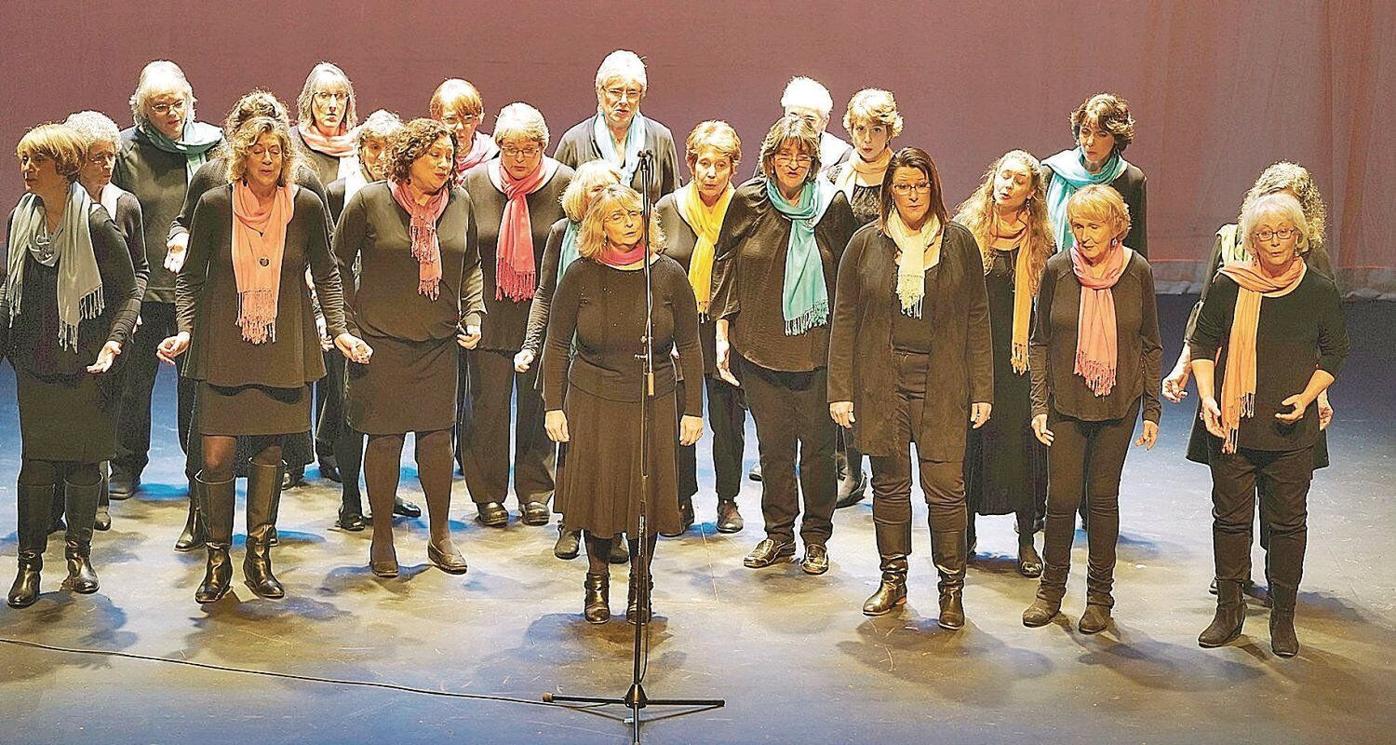 The Berkshire Hills Chorus will perform Saturday evening at the Barrington Stage Company's main stage for a 50th anniversary celebration.

Chorus members are not required to read music, but must be able to carry a tune.

The Berkshire Hills Chorus will perform Saturday evening at the Barrington Stage Company's main stage for a 50th anniversary celebration.

PITTSFIELD — When Pam Basinski's three children were were young, "I needed a night out," she recalled, "and was looking for something to do."

She found herself — after an attempt at joining volleyball — at a Sweet Adelines rehearsal. "Everybody was so friendly, running around getting music for me."

That was 44 years ago. Today, she's still with the group, now called Berkshire Hills Chorus, as it prepares for a gala concert on Saturday at the Barrington Stage Company's Boyd-Quinson Mainstage. "Time After Time" will celebrate 50 years of sharing the singers' love of barbershop-style a cappella music.

In 1969, the Barber-Tones women's chorus, which met each week in Harmony Hall on North Street, officially became the Pittsfield chapter of Sweet Adelines. The half-century anniversary was recently recognized with a City Hall proclamation.

Founded in 1945 in Tulsa, Okla., Sweet Adelines International supports women singing unaccompanied close-harmony arrangements of traditional and popular songs, with tenor, lead, baritone and bass parts emulating men's barbershop sections. With 21,000 members in North America and around the globe from Sweden to Japan, ensembles ranging from quartets to mighty 200-voice choruses gather each year at regional and international conferences and competitions.

Chorus manager Janie Pellish has been with the group for 18 years.

"I sang my whole life, since I was very young," she said. "When I moved to Pittsfield, I sang with larger choral groups, but wanted to try something new."

One evening she attended a Berkshire Hills Chorus rehearsal "and was hooked, the harmonies were fantastic."

"I've been here ever since, I love the challenge of barbershop music," she added.

After nine years singing the tenor high part, she changed to bass "and had to relearn the whole repertoire."

Pellish schedules 20 performances a year county-wide, from Sandisfield to Adams, at venues including Berkshire Medical Center, Tanglewood and the Red Lion Inn. She's always looking for new places for the chorus, its four quartets and nonet to perform.

Visiting nursing homes is very special, Pellish said. "People really respond to the songs we sing, it brings a lot of joy."

Longest-serving member Basinski also appreciates seeing residents' faces as they sing along to old numbers like "Let Me Call You Sweetheart."

Basinski has seen chorus members come and go, from teenagers to octogenarians, staying a few years or much longer. They don't have to read music, but must be able to hold a tune.

"It's more advanced now, we're picking songs that are a cappella, not barbershop. It's a different genre," she said.

"People can do notes and words, but the emotion and feeling behind it is what makes the difference in a performance," Wojtkowiak added.

In 2015, their first year at the helm, the chorus won first place and Most Improved at regional competition, earning additional awards each year since.

A music educator at Lee Public Schools for 20 years, Feldman joined the chorus briefly in 1994 then returned to stay in 2009. Her daughter also sang with the group for five years.

"Sweet Adelines started because women saw their husbands having a great time singing barbershop and wanted to participate," Feldman said. "A cappella music is becoming a huge deal for our young people, and that's the direction we're heading."

Former church cantor Wojtkowiak has seen changes since her sister-in-law introduced her to the chorus 10 years ago.

"We've become more aware of what our voices can do," she said. With technique classes offered at regional weekends, "everybody just evolves, and we build on it."

Seven seasonal singers will join the chorus for Saturday's concert, plus guest quartets Past Curfew and comic foursome the Derry Aires.

The chorus has learned all new songs for the occasion, with selections drawn from each decade. Audience members can expect plenty of favorites and more than a few surprises. "It's very exciting," Feldman said.

The Berkshire Hills Chorus spent more than a year singing together, yet apart over Zoom

After more than a year of practicing over Zoom, the Berkshire Hills Chorus has reunited in person, practicing in Pittsfield's McKay Street Parking Garage.