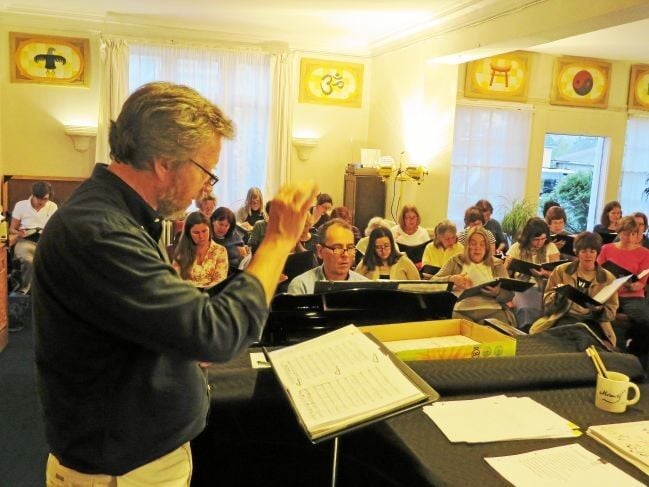 Berkshire Lyric Artistic Director Jack Brown conducts member in a rehearsal for Sunday's 'A Grand Opera Spectacular,' which will be performed at 3 p.m., at the Colonial Theatre in Pittsfield. 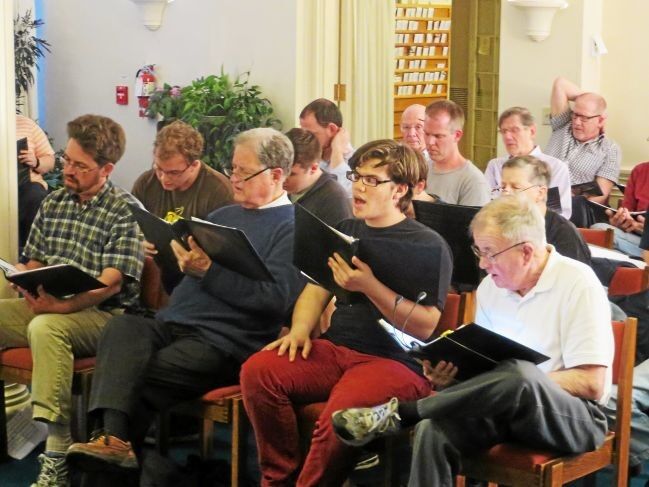 Tenors and bass singers of Berkshire Lyric rehearse for 'A Grand Opera Spectacular,' which will be presented at 3 p.m. Sunday at the Colonial Theatre in Pittsfield.

Berkshire Lyric Artistic Director Jack Brown conducts member in a rehearsal for Sunday's 'A Grand Opera Spectacular,' which will be performed at 3 p.m., at the Colonial Theatre in Pittsfield.

Tenors and bass singers of Berkshire Lyric rehearse for 'A Grand Opera Spectacular,' which will be presented at 3 p.m. Sunday at the Colonial Theatre in Pittsfield.

PITTSFIELD >> For the first time in about seven years, the Colonial Theatre will fill with the vibrato and bel canto of live opera — calling attention to the state of opera in the region.

Three of our four Met soloists happen to live in the Berkshires: soprano Maureen O'Flynn is from Stockbridge, mezzo-soprano Marjorie Elinor Dix resides in Richmond and bass John Cheek comes from Egremont. Tenor Raúl Melo will make the trip from New York City to join them.

Sunday's event will also include a selection sung by the 30-voice Blafield Children's Chorus.

"This is a slightly different thing for a community chorus to do," Brown said, "but we've had a lot of growth in the last two years."

Since this past December alone, Berkshire Lyric's season has demonstrated a dynamic range of repertoire, from Handel's "Messiah" to last month's program of gospel and spirituals.

"Whenever possible, we try to get people to work with classically trained singers, and we try to do good music across different genres," Brown said.

Four performance groups come together under the Berkshire Lyric umbrella: The Blafield Children's Chorus of young vocalists between the ages of 6 and 13; the high school-aged Berkshire Singers; the auditioned a cappella chorus Ubi Caritas of singers ages 16 to 26; and Berkshire Lyric Chorus, which includes auditioned high school through adult-age singers.

With the opera artists nearby, promising homegrown talent and enough membership to help fill the Colonial, Brown said Berkshire Lyric decided to venture out on a limb to fund and orchestrate the production — and learn lyrics in Italian and French while they're at it.

"It's a great stretch for us," he said. "And at the end of the day these kinds of creative challenges give people here new challenges to do cool stuff."

That challenge appeals to many members of the group.

Among them are Jacob Kerzner, a 16-year-old tenor from Sheffield and student at Bard College at Simon's Rock; Rick Floyd, a baritone and retired pastor of the First Church of Christ in Pittsfield; and John Demler of Pittsfield, a classically trained baritone and guest vocalist for Berkshire Lyric.

He has had little exposure to opera, he said. Berkshire Lyric has also given him the chance to meet new people who have a passion for music.

"It's really amazing to sing with adults, all of whom have been singing longer than I have. It's great to be able to contribute and learn with them," he said.

Floyd, who started singing in choral groups at age 6, said the group has given him newfound confidence as an adult vocalist.

"This music is really fun," he said, adding that audiences for "Grand Opera Spectacular" will have the chance to hear voices they would typically have to go to New York City to here — and it's phenomenal bargain compared to the Met.

The Colonial is also the kind of theater opera should be done in, Demler said.

For veteran soprano Maureen O'Flynn, the chance to perform in her native Berkshire backyard, with a company and venue she rose from, and share an art form she accidentally became a champion of could not make her happier.

She became involved with Berkshire Lyric in 1979, she said, when it's name ended with "Theatre."

"I didn't go to school for what I've been doing," she said. "Berkshire Lyric was really my conservatory, along with Berkshire Public Theatre, and Berkshire Lyric is still very near and dear in my heart."

Thinking over the sustainability of opera, especially in the Berkshires, O'Flynn and her Berkshire Lyric collaborators say the genre, though altered by contemporary contexts and electronic reproductions, is evergreen.

"Since I started in this," O'Flynn said, "from that moment to this moment, I have heard that opera is dying."

In the Berkshires, opera has waxed and waned. The former Berkshire Opera Company, founded in 1985 by Englishman Rex Hearn, enjoyed a laudable run until 2008, when it succumbed, like many organizations during the recession, to a budget deficit.

Since then, opera has presented itself for limited engagements in the Berkshires, in occasional offerings in the Tanglewood season and local chamber series and the seasonal Met Opera "Live in HD" series screened at the Mahaiwe Performing Arts Center in Great Barrington. In the winter of 2014, the Whitney Center for the Arts began presenting "Opera Notte," an evening of arias in Pittsfield, and Williams College music professor Keith Kibler's organization, The New Opera, has become affiliated with the Williams Opera Workshop and presents occasional performances including last summer's staged concert production of "Carmen."

With such a range of music and culture offerings in the Berkshires, from jazz to dance to cabaret, "it's a sin there's no opera here anymore," Demler said.

Last fall, the announcement of a Berkshire Opera Festival caught the attention of critics. According to its Facebook page, which mentions a May 9 fundraiser in Cobble Hill, N.Y., the group has gone on since with little fanfare or campaigning in the Berkshires. With only 781 Facebook "likes," it may have a long way to go to reach its goal of staging its inaugural summer festival season in 2016.

Though the form can seem elusive, Kerzner said opera can hold appeal for even people his age, if they're exposed to it.

"It's an epitome of emotion," he said.

"It's an art form like no other," O'Flynn said, "... and if isn't here in the Berkshires, then there is a lacking. There's a flavor and a taste you can't have if you don't have opera."