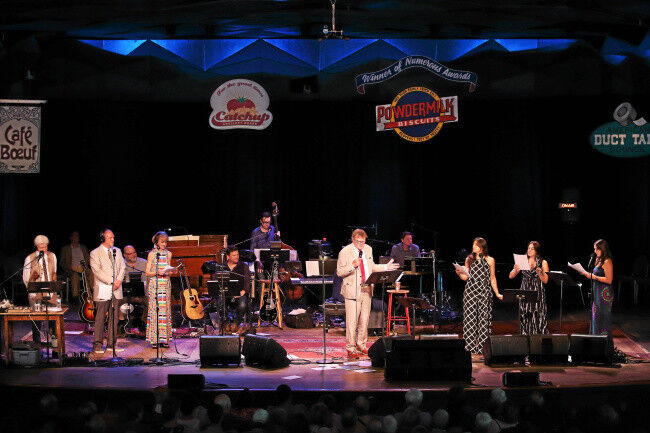 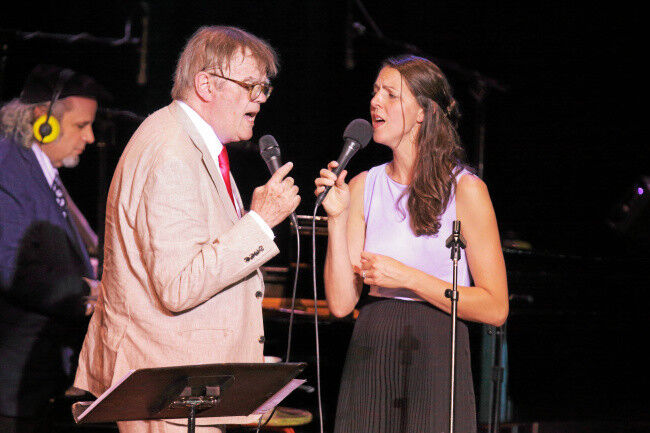 Garrison Keillor and Heather Masse paired up in a sweet rendition of Van Morrison's "These Are the Days," one of the highlights of Saturday night's "Prairie Home Companion" broadcast from Tanglewood.

Garrison Keillor and Heather Masse paired up in a sweet rendition of Van Morrison's "These Are the Days," one of the highlights of Saturday night's "Prairie Home Companion" broadcast from Tanglewood.

LENOX — After 42 years of hosting "A Prairie Home Companion," Garrison Keillor remains enigmatic, a brilliant writer and broadcaster who can seem aloof off-stage.

However, there's no doubt that he basked in the warm glow of the adoring crowd that packed Tanglewood's Shed and lawn, 11,704-strong, on a perfect Saturday evening. No doubt they were well aware that it was the last time they would witness his melange of homespun wit, musings on the state of the world and of human nature, imaginative sketches and a broad sampling of musical Americana.

During his 17th annual broadcast from the Boston Symphony's summer home and his penultimate "Prairie" hosting appearance prior to retirement, Keillor — who has never used his name on the air — avoided any outward display of regret over his impending exit after his Hollywood Bowl finale next weekend. His legacy includes 1,470 live radio shows.

Instead, Keillor presided over a classic show filled with encomiums to Tanglewood ("a beautiful sound under the Shed"), The Mount ("Edith Wharton's beautiful house"), Lenox ("there's no more-pretty town in all of America"), Stockbridge and its Rockwellian charms, and the lure of the Berkshires for overseas visitors ("this is the part of America you want to bring 'em to first if they've never seen anything else").

He also aimed frequent barbs at "the punk who would be president," as Keillor dubbed Donald Trump in a recent newspaper column.

There was even a late-breaking skit on "Brexit." The Thursday vote "has its good side too," said Keillor with a figurative wink. "It kind of opens the door for the Berkshires, Vermont and upstate New York to at least form a kingdom here and not be subservient to an elite from New York City and Washington, D.C. the Kingdom of Berkshire."

All this despite fatigue from a two-day round-trip to Oslo earlier in this week for a Midsummer Independence Day Speech, a "crazy thing," he acknowledged, "but so great."

"This small country is way ahead of us in so many ways, they believe in coalition governments in Norway," Keillor declared. "You have your election, you give your speeches, you go at each other, argue and disagree, and then you come together to make things actually work."

His script satirizing Trump's obsessive self-promotion, voiced by radio actor Tim Russell, was appropriately biting and sharp-edged, though the "Guy Noir, Private Eye" sketch set in Lenox was hit-and-miss. But The News from Lake Wobegon was hilariously racy.

A commercial parody for "Fritz Electronics, everything you need is on the Fritz" included voice actor Sue Scott's clever poke at Hillary Clinton's internet misadventures.

Saturday's musical collaborators were among the best of his frequent guests: the genre-defying alto Heather Masse, the talented close-harmony DiGiallonardo Sisters from Brooklyn, and the exemplary Broadway pianist and conductor Rob Fisher, who collaborated with the show's music director Rich Dworsky on a rollicking four-hand piano version of "Swanee."

The DiGiallonardos covered and even improved on Billy Joel's gentle ballad "You Were the One" (the host, acknowledging he was a newcomer to Joel's music, pronounced it "beautiful, absolutely wonderful"). Masse delivered an achingly romantic "My One and Only Love," the frequently-recorded ballad popularized by Frank Sinatra in 1953.

The entire musical cast soared for a rollicking "Higher and Higher," supplemented by improvised Keillor lyrics. The host partnered with Masse in a sweet duet, Van Morrison's "These Are the Days," and with Christine DiGiallonardo for the gospel classic, "Take My Hand, Precious Lord," which sounded to this listener like a valedictory hymn to his radio days.

As a parting gift to his local admirers, Keillor's sing-along encores stretched a good 100 minutes beyond the 8 p.m. radio broadcast sign-off.

Then, obviously reluctant to leave Tanglewood for the last time as "Prairie" host, Keillor stayed past 11 p.m., signing autographs for his faithful flock who see him as a cross between Mark Twain, Will Rogers and a minister whose sermon-like monologues gently, non-judgmentally, explore the foibles of humanity.

A fitting, final salute to an American Original who lit up many of our dark nights and lifted our spirits all these years.