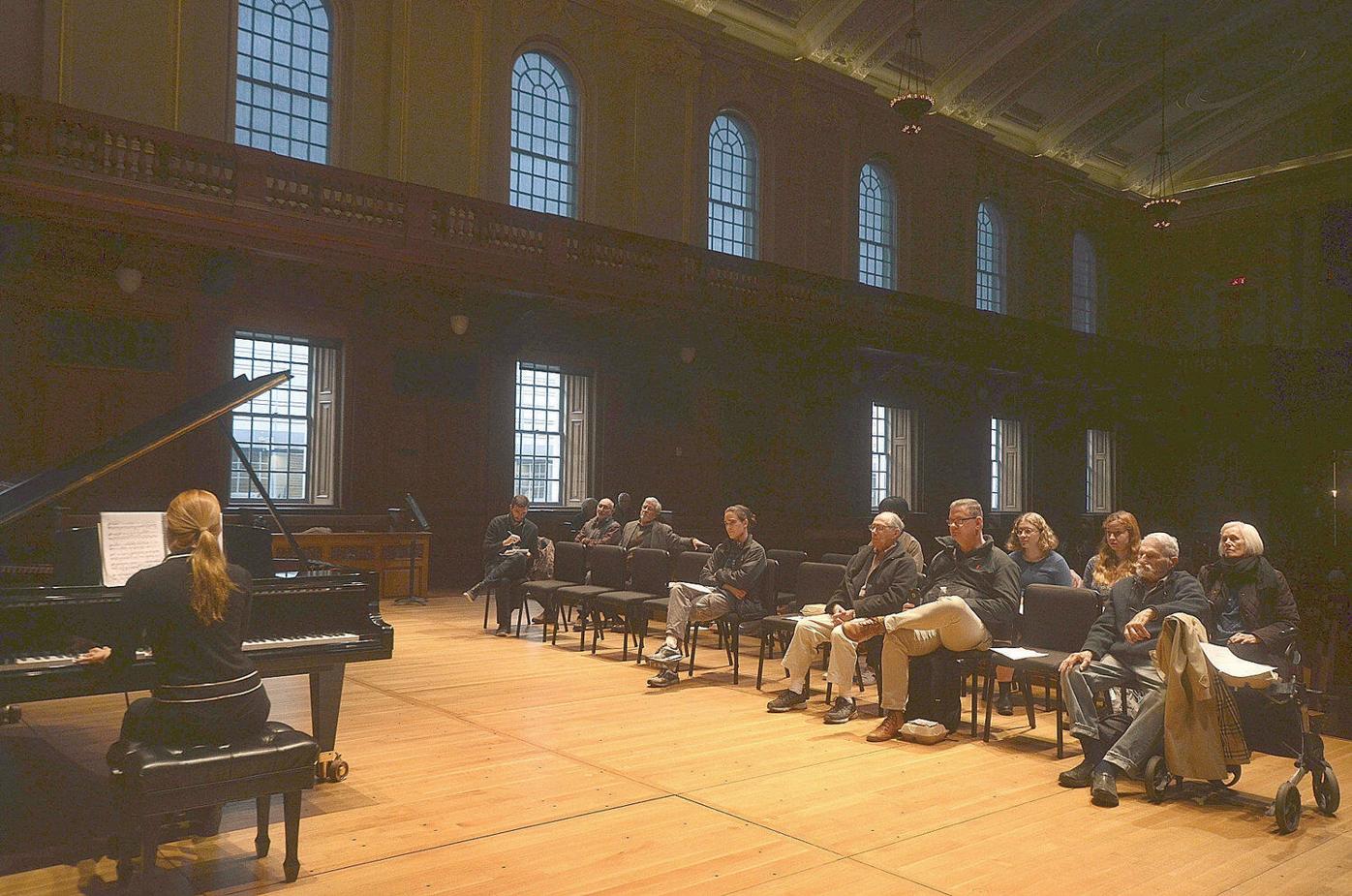 Hannah Chang performs a piece on the piano in Chapin Hall at Williams College during a MIDWEEKMUSIC concert. The series is free for the public to attend and usually lasts about 40 minutes. 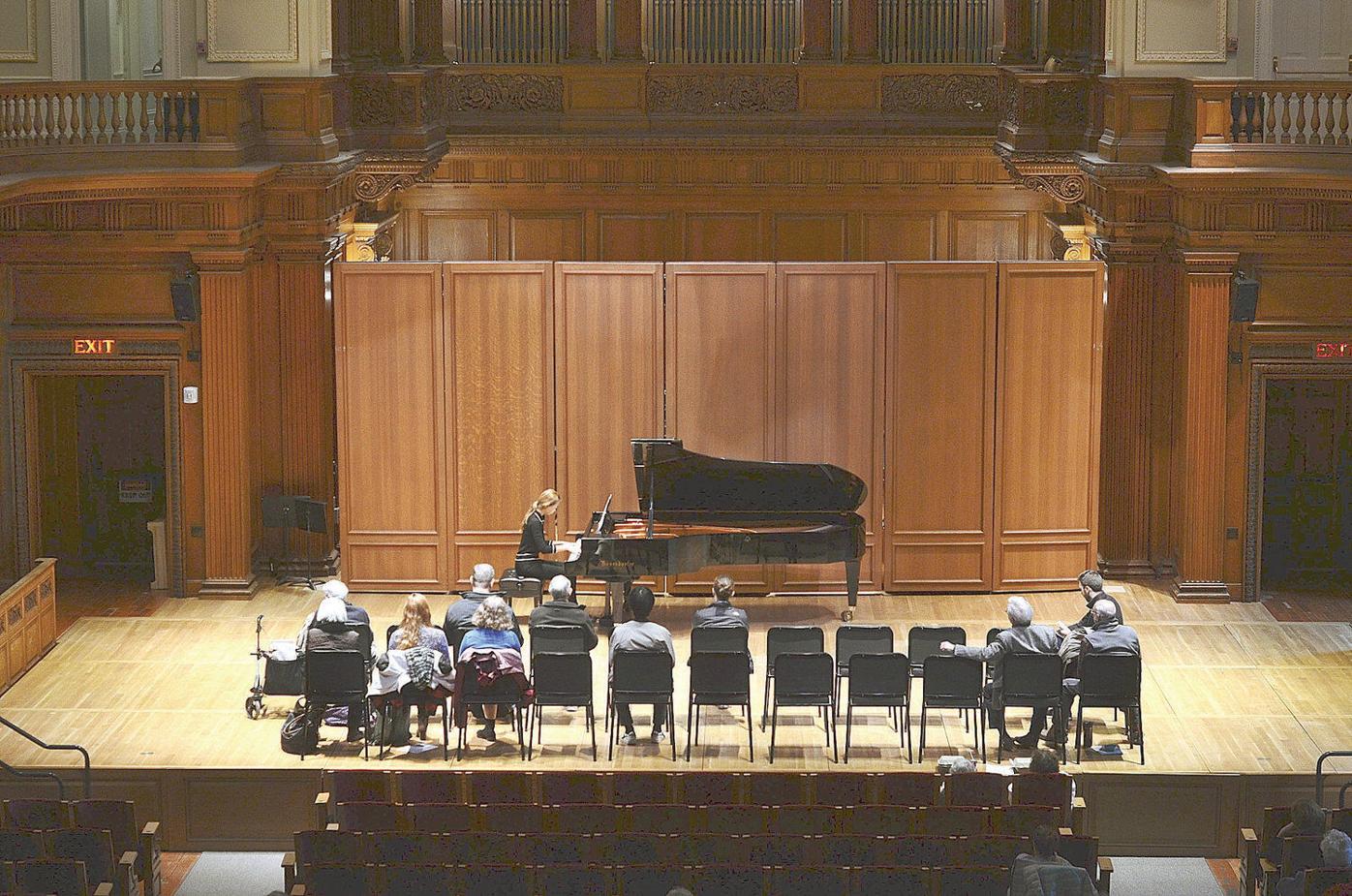 The free concert, held most Wednesdays, is open to the public. There is seating available on stage for those who like a chamber music setting and seating throughout the hall for those who feel more comfortable sitting farther away. 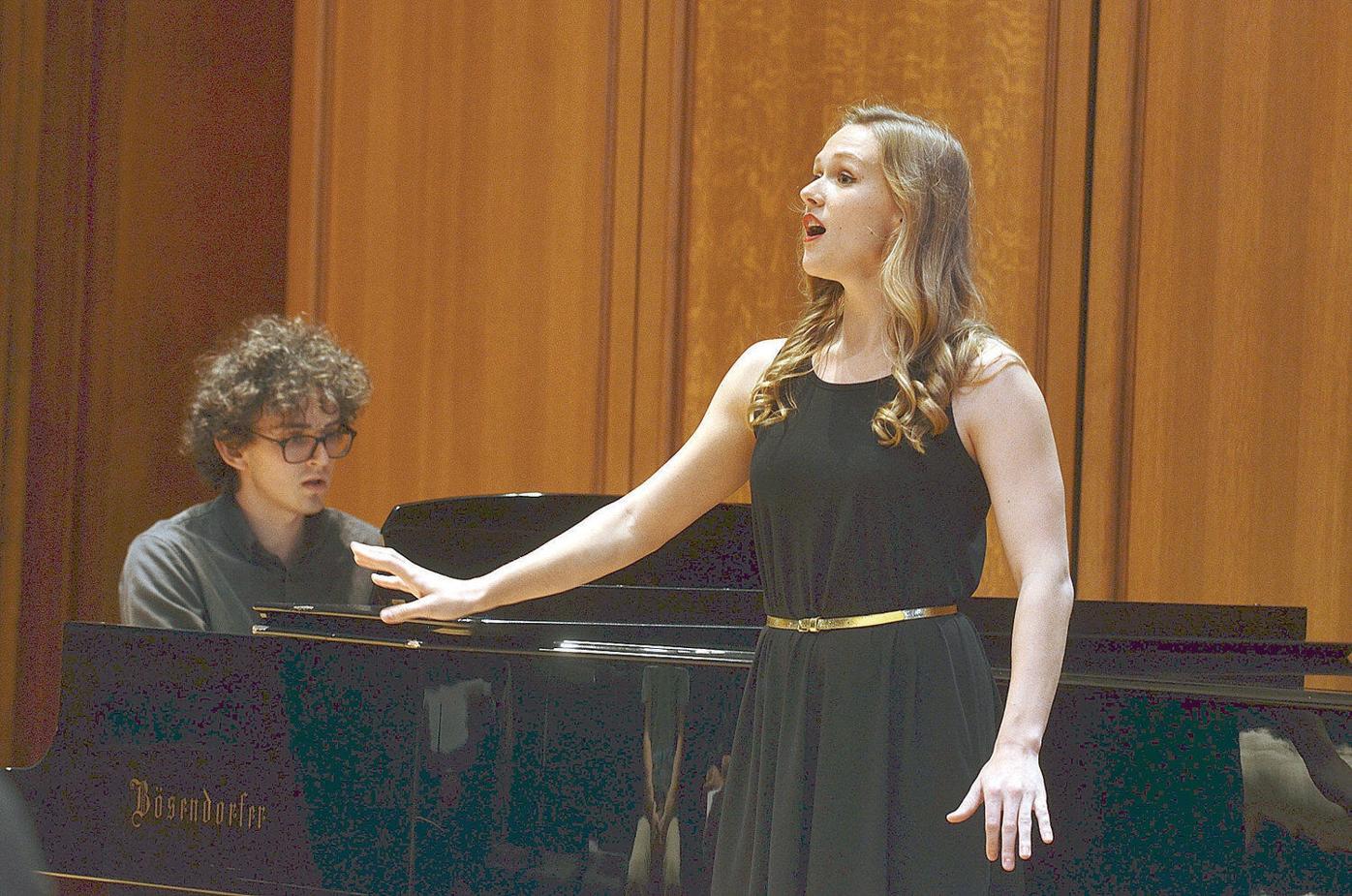 Soprano Erin Kennedy and pianist Jake Eisner perform during a MIDWEEKMUSIC concert. Kennedy hopes to perform at all of this season's MIDWEEKMUSIC offerings.

Hannah Chang performs a piece on the piano in Chapin Hall at Williams College during a MIDWEEKMUSIC concert. The series is free for the public to attend and usually lasts about 40 minutes.

The free concert, held most Wednesdays, is open to the public. There is seating available on stage for those who like a chamber music setting and seating throughout the hall for those who feel more comfortable sitting farther away.

Soprano Erin Kennedy and pianist Jake Eisner perform during a MIDWEEKMUSIC concert. Kennedy hopes to perform at all of this season's MIDWEEKMUSIC offerings.

WILLIAMSTOWN — With towering exterior columns and an immaculate interior concert room that regularly hosts classical performances, Williams College's Chapin Hall doesn't exactly exude informality. Yet, if you enter the space shortly after noon on most Wednesdays, you'll find people munching on their lunches unapologetically in the red-cushioned seats filling the room and black chairs occupying a portion of the stage.

"It gives people a chance to workshop things a little bit if they need," Myers said on Wednesday.

The series has been a staple of the department's programming for more than a decade. Free and open to the public, MIDWEEKMUSIC emerged as a forum for students to present solo and small-group pieces that didn't have homes in the school's other offerings.

"We have big ensemble concerts. We have class concerts. We have solo student recitals. We have studio recitals, which are all formal and planned far in advance," Myers said. "There's an awful lot of music that's going on that's outside those parameters."

For example, students may be taking lessons at the school.

"A lot of those students aren't necessarily involved in those other things where they would have a chance to play, so MIDWEEKMUSIC caters to them," Myers said.

First-year student Francesca Hellerman has been working on Johann Sebastian Bach's "The Well-Tempered Clavier" during lessons. Hellerman opened Wednesday's program with Book I's Fugue in D Major, stepping up to a Bosendorfer grand piano and playing for a few minutes.

"It's always nice to be able to share," the pianist said later.

But MIDWEEKMUSIC welcomes all instruments and genres.

"We have vocal performances in other styles. We have jazz performances. It really is open to everybody. You don't have to be in the music department or be taking lessons here, even. If a group wanted to come up and sing an a cappella thing, they could sign up," Myers said.

Though musicians book their spots in advance of the events, some in the audience have been inspired to take the stage after the slotted performers exit.

"I never turn anybody away," Myers said.

He doesn't limit the number of scheduled artists, either.

Wednesday's edition was shorter, lasting about 25 minutes. As the semester progresses, more musicians sign up as they prepare for class-related presentations or other performances, according to Myers. Kennedy, who hails from St. Paul, Minn., and has competed on the school's women's swimming and diving team, will be a constant at the gatherings. She is preparing to present a vocal performance thesis at the end of her music studies.

"My goal is to perform at all the MIDWEEKMUSICs," she said, praising the "casual" environment.

Myers described Kennedy as a "dynamic performer" and said that her commitment will provide stability to the program.

"For people who liked her first performance, it's sort of an incentive to keep going and say, 'What's next week's installment?'" he said.

The audience can view the series from traditional seating leading up to the stage and an upper level overlooking it. Two rows of chairs also line the front part of the stage.

"If you want to have the chamber music experience and just be really close to the performer, you can do that," Myers said. "But if [you] don't want to be that close — you can do that, too."

Pandy Goodbody of Williamstown is one of many regulars at the series, which draws a substantial portion of its audience from locals and college employees, according to Myers.

"I usually sit right up on the stage," Goodbody said, noting that she and her husband, Pim, settled for a spot in one of the rows farther from the stage because they were late.

But late patrons and those looking for an early exit don't furrow brows at MIDWEEKMUSIC.

"The beauty of that is it's not only flexible for the performers, it's flexible for the audience," Myers said. "We don't expect people to arrive 15 minutes early and sit in their seat for however long it takes. At every applause, there's no prejudice. If you have to go, then you go."

For Myers, witnessing the unexpected is part of the series' appeal.

"I hear musicians that I have never heard before or seen before, and that's always amazing to me because I'm here all the time, and I think I see everything," he said.

"Any one concert, a brief one like this, if you think of how many hours each of those people have put in to what they are doing," he said, "that just blows me away every time."