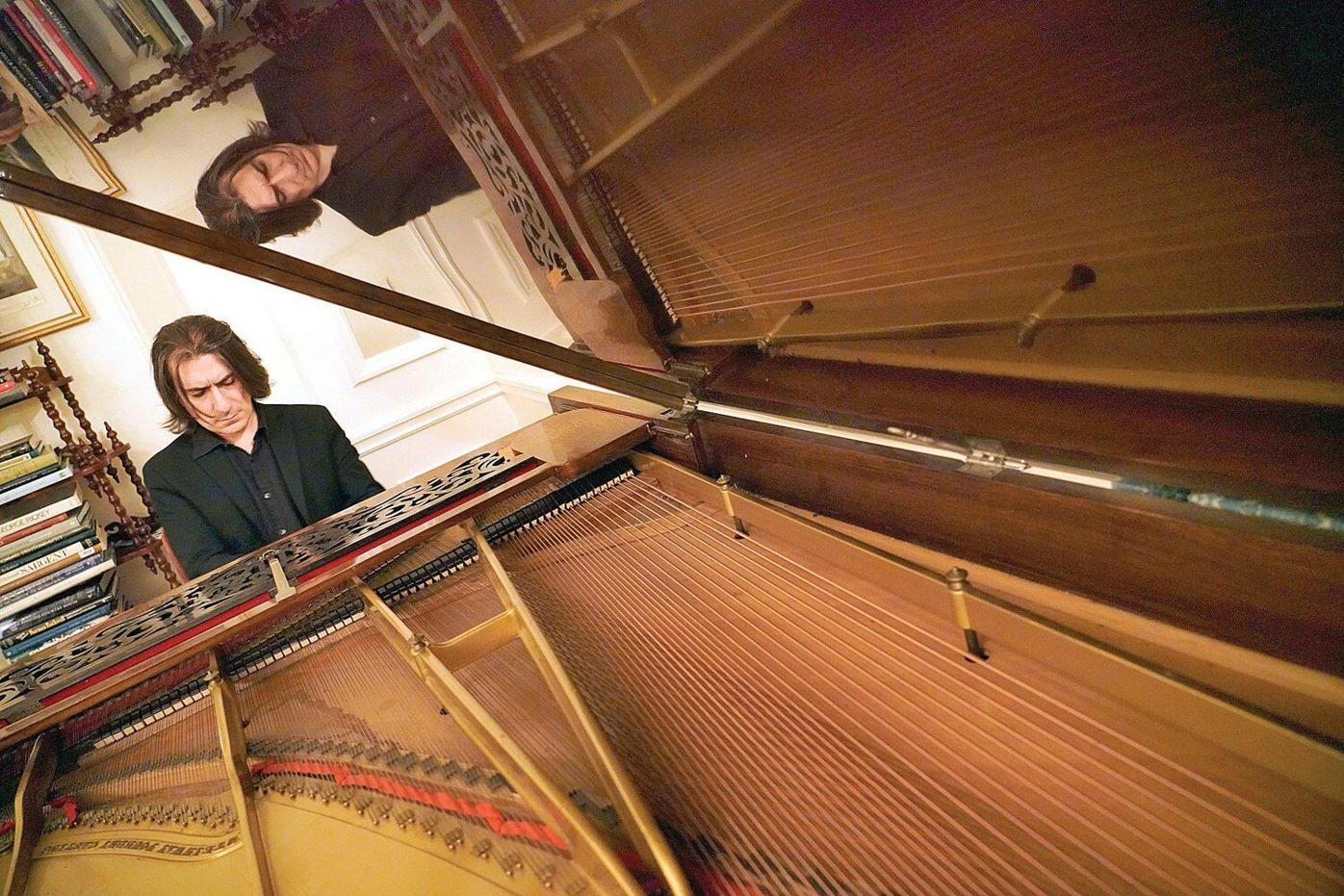 Karen Tchougourian, the resident pianist at Blantyre in Lenox, can often be found playing in the inn's Music Room, which he says is "one of the best I've ever encountered," in terms of acoustics. 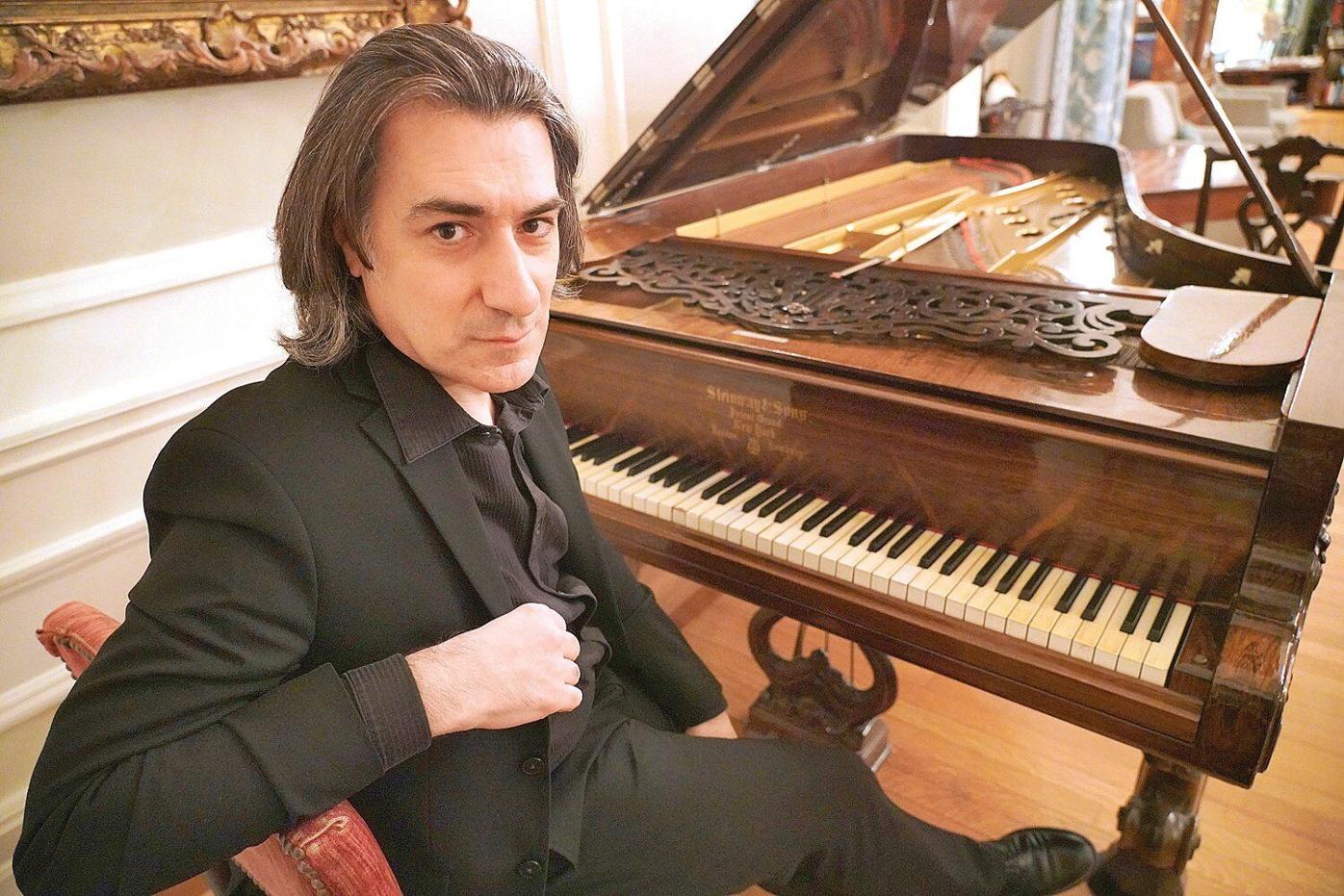 "I feel more comfortable here than in my own living room," says Karen Tchougourian, Blantyre's pianist since 2006. He likens the job to scoring the music for a film. Each evening has many "scenes."

Karen Tchougourian, the resident pianist at Blantyre in Lenox, can often be found playing in the inn's Music Room, which he says is "one of the best I've ever encountered," in terms of acoustics.

"I feel more comfortable here than in my own living room," says Karen Tchougourian, Blantyre's pianist since 2006. He likens the job to scoring the music for a film. Each evening has many "scenes."

LENOX — A Rodgers and Hammerstein lyric from the musical "Cinderella" sums up well the world of that man over there, in the corner, on a chair.

"In my own little corner

In my own little chair

I can be whatever I want to be

On the wing of my fancy

I can fly anywhere "

Does he know how to play that song? Of course, he does.

Karen Tchougourian, the resident pianist at Blantyre, is a fixture in this old, exquisite inn, as much so as its huge fireplaces, black oak paneling and leather-bound wine lists. Most evenings since 2006, he has been fulfilling the high auditory expectations of a discriminating clientele — his dazzling piano playing, emanating from a corner of the majestic Music Room.

He prefers to let the piano do the talking — a powerful Steinway & Sons from the 1800s — but on a recent evening, he made an exception to field some questions about himself; what this gig at Blantyre entails; his favorite sounds on earth; the worst piano stool he has ever sat upon; and those hands of his that remember every injury they've ever endured.

But first, how to pronounce his name?

"It's pronounced ca-REN chew-GOR-ian," says the hardest working pianist in Berkshire County, in the lilting accent of his native Armenia, a country from which he emigrated in 1993.

Born in 1969, Tchougourian first wanted to be an astronaut, then a fireman. But ultimately, he succumbed to the sounds rendered through his mother's hands. A pianist, a music professor, his mother, Inessa, made sure her home was filled with the sounds of Chopin, Bach, Ravel and others. The classical melodies and counterpoints, the beauty and logic of it all, wended their way into Tchougourian's central nervous system. By 10 years old, he realized he couldn't imagine that repertoire not defining his daily life.

"It's such a richness to possess," he says. "The music penetrates the heart. It's primal."

And what about his musical pedigree? It links to Beethoven, but how?

In Europe, he won a bunch of prestigious piano competitions. In the United States, he earned a Master of Music degree from the University of Central Arkansas and a Doctor of Musical Arts degree from Manhattan School of Music.

Upon a visit to the Berkshires, he fell in love with the place and eventually settled here. He literally went door to door offering his piano services. Someone suggested he present himself to Blantyre, which he did. They had him sit at their old piano and play whatever came to mind. He's been playing whatever comes to mind at Blantyre ever since.

And, is it true he has a near psychic ability to guess what people want to hear?

"I can't explain it," he says. "I can just look at people and know their musical preferences."

At Blantyre, he provides "ambience," which can mean different things at different moments with different crowds. Sometimes the Music Room is filled, and the people want a recital. Sometimes, he has the room to himself, and his playing merely provides faint background to those digging in to a helping of Faroe Island Salmon Gravlax or whatnot in the adjacent dining areas.

"It's almost like scoring a film," he says. "It depends what the action needs; that's the repertoire you introduce in that moment. There are moments when the music needs simply to be background, for comfort.

"Then there are people who want to listen to every single note intently and burst into applause, so I then feel I need to provide that kind of artistry and that kind of performance."

For couples, he can go full Cupid to enhance the romance. If Tchougourian senses trouble in paradise, it's amazing what a little Gershwin can do.

His repertoire incorporates classical, Broadway tunes, movie themes, jazz, Latin and folk songs from throughout the world. And, yes, one time he did catalogue the songs he knows by heart: about 2,000 titles. He adds about five new songs a week. He doesn't use sheet music. (He also speaks half a dozen languages, too.)

"The hard part is remembering what songs I know how to play," he says.

Despite the beauty of song, his favorite sounds are those of nature — the ocean, a stream, the sound of leaves blowing.

Does he ever sing?

What about this room — the Music Room? Are the acoustics awesome here, or what?

"One of the best I've ever encountered," said the man, who had played at Carnegie Hall's Weill Recital Hall.

He's joined in his own little corner by a painting of a seemingly pampered young man from another age who, strangely, has no shoulders to speak of. What's with him?

"You know, I don't know," Tchougourian says. "Good guy, though."

In between his work at Blantyre, Tchougourian plays at community events countywide. Did you know Berkshire County has many, many, many pianos, and many, many of them could sorely

use some professional restoration and tuning?

He is "endlessly, endlessly appreciative" of the kindness shown to him by residents of nursing homes and assisted living facilities.

The least comfortable chair he ever had to use was one of those walker chairs that a woman at a nursing home lent him.

"We couldn't find the regular stool anywhere, and everyone was waiting," he recalls. "There were a lot of photos taken that day."

What about his hands, so perfectly formed to blow the doors off Rachmaninoff and Scriabin?

"A lot has been given to me by nature," he says, holding out his digits: not too big, not too small, flexible, and super fast.

When he plays, he feels every injury his hands have ever endured — like that time 40 years ago when a bicyclist hit him and fractured two of his fingers. He feels every burn from a kitchen stove and nick from a paring knife.

They get sore, but they don't get tired.

"No," he says. "They love this. They are so happy to do this. But my back — that gets sore. Complaining about it helps, if I find the right person to complain to."