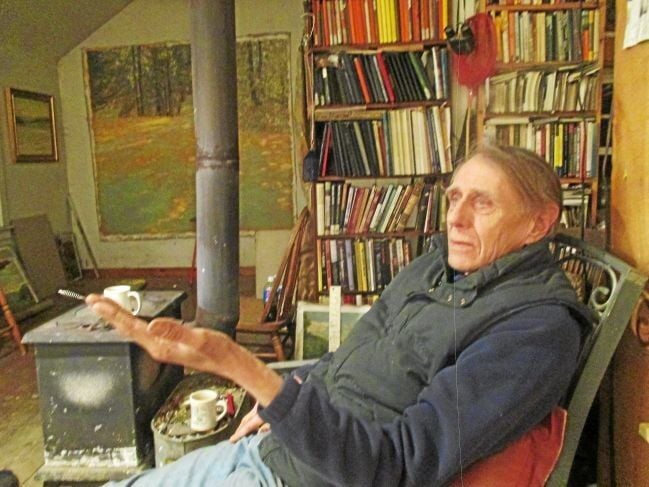 Harry Orlyk relaxes in his studio. 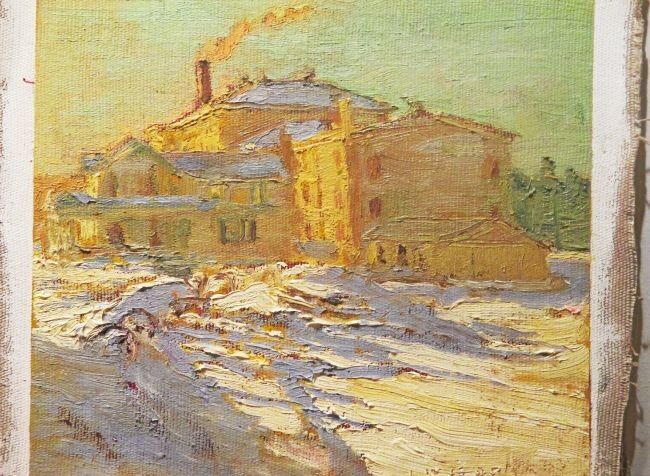 Harry Orlyk relaxes in his studio.

SALEM, N.Y. >> "See, spring is coming," said Harry Orlyk on a sub-zero evening by the wood stove as he looked at a new painting.

"I did this one today," he said, "and notice the difference in the light in this one that I did in December, when the sun sits low on the horizon all day long."

Orlyk paints from the driver's seat of his white van. The windshield is his window on the world, allowing him to paint in all weather. He doesn't use an easel — he leans his canvas against the steering wheel.

"I used to take my backpack," he said. "I'd walk to my chosen vantage point, then I'd have to build an eagle's nest of brush and branches to keep the cows out. That was before I drove my van onto the fields. Why should I make it difficult for myself?"

He can tell at a glance the time of year when he worked on a painting.

"They're here and gone before I can make a decent one," he said.

Among his many exhibits, Orlyk has handed over many paintings to Sue Clary, owner of McCartee's Barn and Fine Arts Gallery, who has a show of his work running through March 28.

"I never get tired of looking at them," she said. "They seem to change right in front of my eyes, depending on the time of day. It's like looking out at a vista and getting to experience the sun — or should I say the earth — moving in real time."

The light in her gallery, on the ground floor of the Clarys' historic Salem house, contributes to this feeling, as the paintings hang in home-like rooms.

He has an indomitable spirit, she said, and a motivation to paint in bright sun, on a stormy autumn day, even at night, no matter what.

"Harry Harry is the weather," she said, laughing.

Orlyk is 68, tall and thin, with deep-set blue-gray eyes. Especially on sunny days, he said, he feels driven to get outside with his paint brush and catch the light.

"Orlyk men tend to self-destruct," he said. "Hence my insistence to bring sunlight into the picture in my quest for the spiritual."

His artwork can be a lonely pursuit.

"I miss my painter friend," he said quietly, thinking of Brian Sweetland, the Vermont plein-air artist who died in 2013. "I think of him often and wonder how he would paint a certain line on the horizon, or think about how he would use a particular color, or what he's say about something."

He is still adapting to Sweetland's absence. His wife, Donna, has encouraged him to work with the Salem ArtWorks, he said, and he enjoys mentoring graduate students there.

He lives in an old farmhouse on the edge of the village of Salem, N.Y., near the Vermont border, with Donna, three cats and two dogs. His free-standing studio by the brook is a sanctuary, he said, with a wood stove and windows on three sides.

He remembers the breakthrough moment he decided he wanted to become a landscape painter, he said — at an American Indian festival in Nebraska in the 1970s. His respect for nature, and those who revere it, shows in a large display of arrowheads he's collected from this area, arranged beside art books, shelves of journals, notebooks cataloguing his paintings, his old TV, stacks of paintings, a radio, a baseball glove, his coffee mug and family photographs.

His painting materials also adapt with the seasons. Orlyk uses paint straight from the tube, foregoing turpentine and thinners. Inside the van, the fumes would be overpowering, he said. And the paint varies with the temperature.

"In the summer, paint is thinner," he said. "In winter, it's much more viscous, and I use the texture to describe what I'm painting."

The hard furrowed earth in the foreground of a new painting looks cold and stony, the snow packed into chunks of ice. His summer scenes feel much smoother.

He often chooses not to frame his paintings, he said. He likes his work to keep its raw, fresh, just-finished look, and he often hangs it with the fraying edges of the canvas pinned to the wall.

"When I hand over a painting, it feels more intimate," he said. "It's not blocked in by a standard wooden frame."

He names most of his pieces and numbers each one. He's up to number 5117 as of late February, and he will bring his day's work into his studio to live with it for awhile, to pin it on the wall, to finish it. He'll lay paintings on the floor and get down on his hands and knees to work on them — again, no easel.

He makes these paintings, he said, for anyone who loves this place, upstate New York, Vermont, these mountains.

"This land gives me my sustenance. It's how I make my living," he said.

He finds himself sticking closer and closer to home.

"Monet did that, stayed in his gardens," he said. "There's no need to go far."

Hours: 10 a.m. to 5 p.m. Wednesday, Thursday and Saturday, noon to 5 p.m. Friday and Sunday by appointment