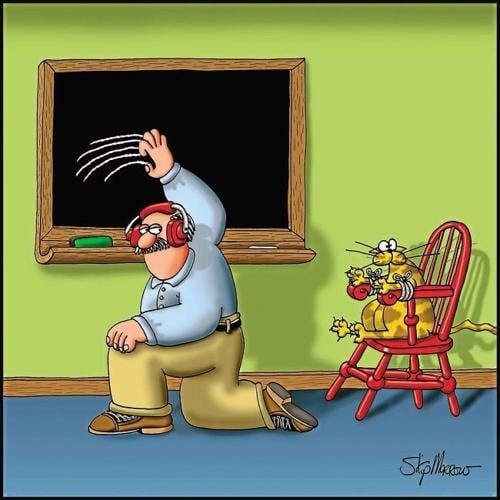 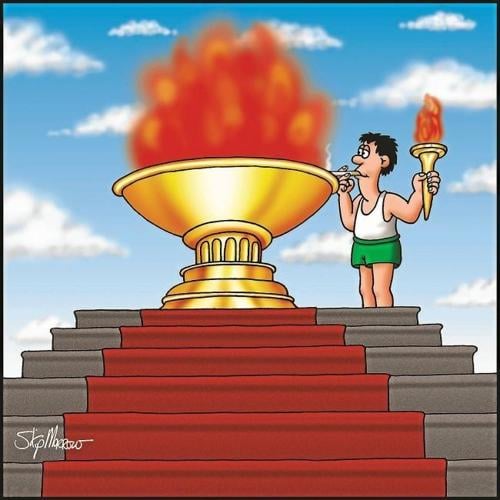 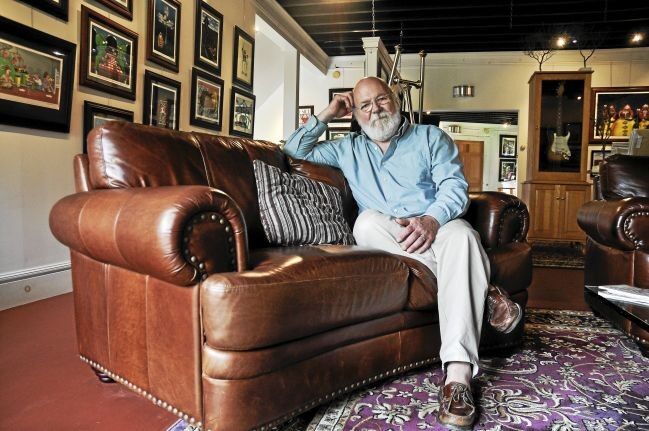 Skip Morrow, seen here at home in Wilmington, Vt., has spent decades making people laugh at and think about his humorous illustrations. He also is the author of several collections including "The Official I Hate Cats Book," a New York Times best-seller.

Skip Morrow, seen here at home in Wilmington, Vt., has spent decades making people laugh at and think about his humorous illustrations. He also is the author of several collections including "The Official I Hate Cats Book," a New York Times best-seller.

Publishing cartoon illustrations since 1980, he has explored the human condition through corporate logos, editorial illustrations, advertisements, greeting cards and more than a dozen books. On his website, he states that businesses commission him to apply his "warped sense of humor" to their campaigns.

"At my best, I'm making people laugh and think," Morrow said in an interview from his studio in Wilmington, Vt., where he has lived since 1974.

His first published collection, "The Official I Hate Cats Book," was a New York Times best-seller that depicts cats being put in precarious situations by their human counterparts. It sold hundreds of thousands of copies worldwide, suggesting how many countless others besides Morrow relate to his musings on our relationships with our feline companions.

Morrow's other works include "The Official I Hate Love Book," about the contradictory emotions love yields; "For the Birds," a comical look at modern culture using birds; and "The Joy of Smoking," which he said is his best book to date.

"It gets smokers to laugh at themselves without alienating them," he remarked.

He continues to create work and display much of it at The Art of Humor Gallery in Wilmington. Much has changed since then, namely the way in which he draws. His 20th anniversary edition book, "I Still Hate Cats," revisited some of his favorite images from the original 1979 book, but this time he redrew them digitally.

When he first started illustrating professionally, Morrow was using pen, ink and watercolor, and then created lithograph prints.

"It kind of happened by accident when I got my first Macintosh," the Apple computer which, Morrow said, was originally not very fast and had very expensive memory.

At the time, Kurta Corporation was producing digitizing tablets for architects, devices akin to a large iPad today that, when drawn on, would transfer that image straight to a computer screen — the beginnings of touch-screen technology. But Morrow thought these tablets would also be of use to artists, so he contacted Kurta with his idea and the company began having him perform demos nationwide.

It wasn't until 2000, however, that the speed of computers and the affordability of digital memory came together to allow Morrow to produce final products completely in digital format to his satisfaction.

"I try to maintain as organic a look as I can because I like pen and ink, but I like the editability of digital," Morrow said, adding that he can more easily edit finished work for clients digitally than with pen and ink.

The cartoonist has moved more toward the fine arts world with his gallery, selling primarily limited edition prints that he frames himself. He said that physical sales have been more profitable than digital ones.

Though he studied communications at Rutgers University, Morrow has considered himself a self-taught illustrator through the years.

"I really needed to be self-taught because I can't be affected by any single teaching style," he said.

When he was just learning the craft in his early 20s, he looked up to Playboy Magazine cartoonist Gahan Wilson, whom Morrow respected for having what he felt was a distinct style. Morrow then began to collect as many cartoon books as he could to develop a more critical eye, realizing that he wouldn't make a career from emulating Wilson's work.

Though his style is consistent and recognizable, his content is always changing. Morrow stated that the title of his gallery — The Art of Humor — is "elusive, subjective," and that he is always exploring humor and seeing how people connect to it. As a result, his gallery walls are constantly cycling new work in an out, much of which has never been published before and can only be seen with an in-person visit.

Morrow's The Art of Humor gallery is located at 30 Not-A Road, off Vermont Route 9, in Wilmington.