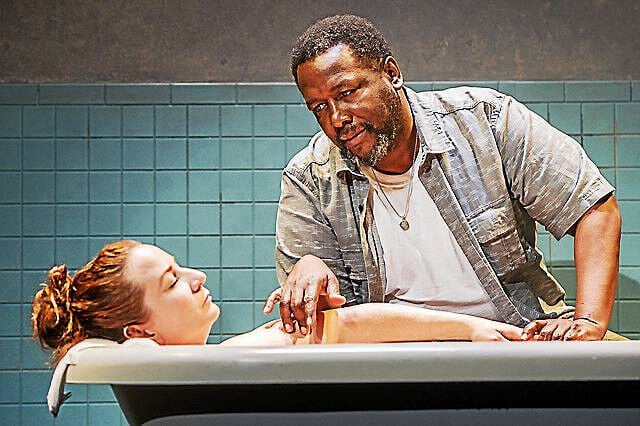 A separated wife and husband — Ani (Katy Sullivan), who's been left without lower legs as the result of a car accident, and Eddie (William Pierce) — navigate difficult terrain in the world premiere of Martyna Majok's "Cost of Living" at Williamstown Theatre Festival's Nikos Stage through Sunday. 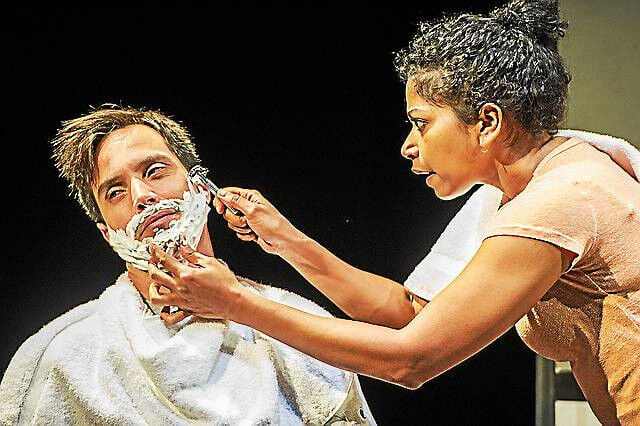 A separated wife and husband — Ani (Katy Sullivan), who's been left without lower legs as the result of a car accident, and Eddie (William Pierce) — navigate difficult terrain in the world premiere of Martyna Majok's "Cost of Living" at Williamstown Theatre Festival's Nikos Stage through Sunday.

WILLIAMSTOWN >> Martyna Majok's wrenching new play, "Cost of Living" — which is being given an emotionally gripping, flawlessly acted and directed world premiere at Williamstown Theatre Festival's Nikos Stage — begins with a monologue in a bar in Brooklyn.

The speaker is Eddie Torres (William Pierce in an achingly poignant, hauntingly memorable, richly defining performance), a 49-year-old out-of-work cross-country truck driver who lost his trucker's license when he was pulled over for a DUI while driving his car.

He is drinking seltzer, waiting for someone, talking about life, his life, to an unseen stranger at the bar. For all his determination to make the best of what has been a particularly bad year, you can see the pain, the hint of helplessness in Eddie's eyes.

Eddie's talk, ultimately, is about loss — chiefly the loss of his wife, Ani (the absolutely stunning Katy Sullivan, a professional actress and Paralympic medalist who was born without lower legs), who died, inexplicably, in a hospital. "Doctors," he says later in the play, with just a hint of bewilderment and sadness. "When there's so much wrong, they don't always catch it. A stupid thing. A small stupid thing."

As "Cost of Living" drops back in time, we see Ani as a woman who, through sheer force of will, life, and just plain Northern New Jersey grit, has made a workable life for herself under formidable circumstance — a horrible car accident that has left her without lower legs.

"Holidays are hard. Christmas next week; that's gonna be hard," Eddie says without mawkishness; merely a statement of life the way it's going to be.

"Cost of Living" moves back in time — and forward in the play's final scene — from that opening in a Brooklyn bar and traces, in non-linear fashion (time sequences are not easy to follow here), not only events in Eddie and Ani's lives but also the lives of another disabled figure, John — a bright Harvard PhD. in political science who has cerebral palsy and a speech defect — and an engaging, overextended young woman named Jess (Rebecca Naomi Jones), who works at a bar at night and, by day, takes on the job, without any professional training or experience, as John's caregiver.

A young man of privilege, John, as played by Gregg Mozgala (an actor with cerebral palsy for and with whom much of this play was crafted), is tough, demanding, though not without an appealing boyish charm. John carries himself with a kind of arrogance and entitlement. "I have money," he says bluntly, "and I can basically do anything I want except the things I can't."

For all the professionalism of their relationship, there is a palpable, if unspoken, sexual tension in the atmosphere which, in a tough turning-point moment, John uses to his advantage.

The manipulations in the give-and-take between Mozgala's John and Jones' appealing, complex Jess are posed against more volatile strains in the relationship between Eddie and Ani. "Cost of Living" is not a simple, familiar, condescending "medical drama" about two disabled people. "Cost of Living" is about survival, about compassion, about assertion of self no matter what the obstacles. It is about the nature of love not only for someone else but for one's own self as well. And, in Eddie's case, Majok's play also is about repairing damage; making good; doing good out of compassion and of need.

Eddie is driven by a need to be needed; to do something good, helpful, generous for someone. He and Ani have separated and he is living with another woman. Eddie nevertheless can't let go of Ani and talks her into letting him become her caregiver. But the territory they navigate is hard. Where John and Jess may not know enough about each other, Eddie and Ani know each other very well. His compassion, his continuing love for her sends mixed signals to Ani, whom Sullivan plays with tough, brash, aggressive, defensive resistance and push-back. And then, in one heart-wrenching scene in which Ani nearly drowns in a bathtub, everything collapses and her vulnerability, her need is exposed.

There is no room for patronizing or self-pity in this setting. The cost of living in "Cost of Living" is high and hard. Wit, humor, in particular, are handy tools which John and especially Ani apply with consummate skill.

Without cloying sentiment, Majok posits faith in the human spirit; its ability to survive; assert itself and in that assertion, thrive.

"I leave the lights on now, every room," Eddie says in his opening monologue. "Smoke signal; I'm still here."

What: "Cost of Living" by Martyna Majok. Directed by Jo Bonney; original music by Justine Bowe

When: Through Sunday. Evenings — Friday and Saturday at 8; Matinees — Saturday at 3:30; Sunday at 2