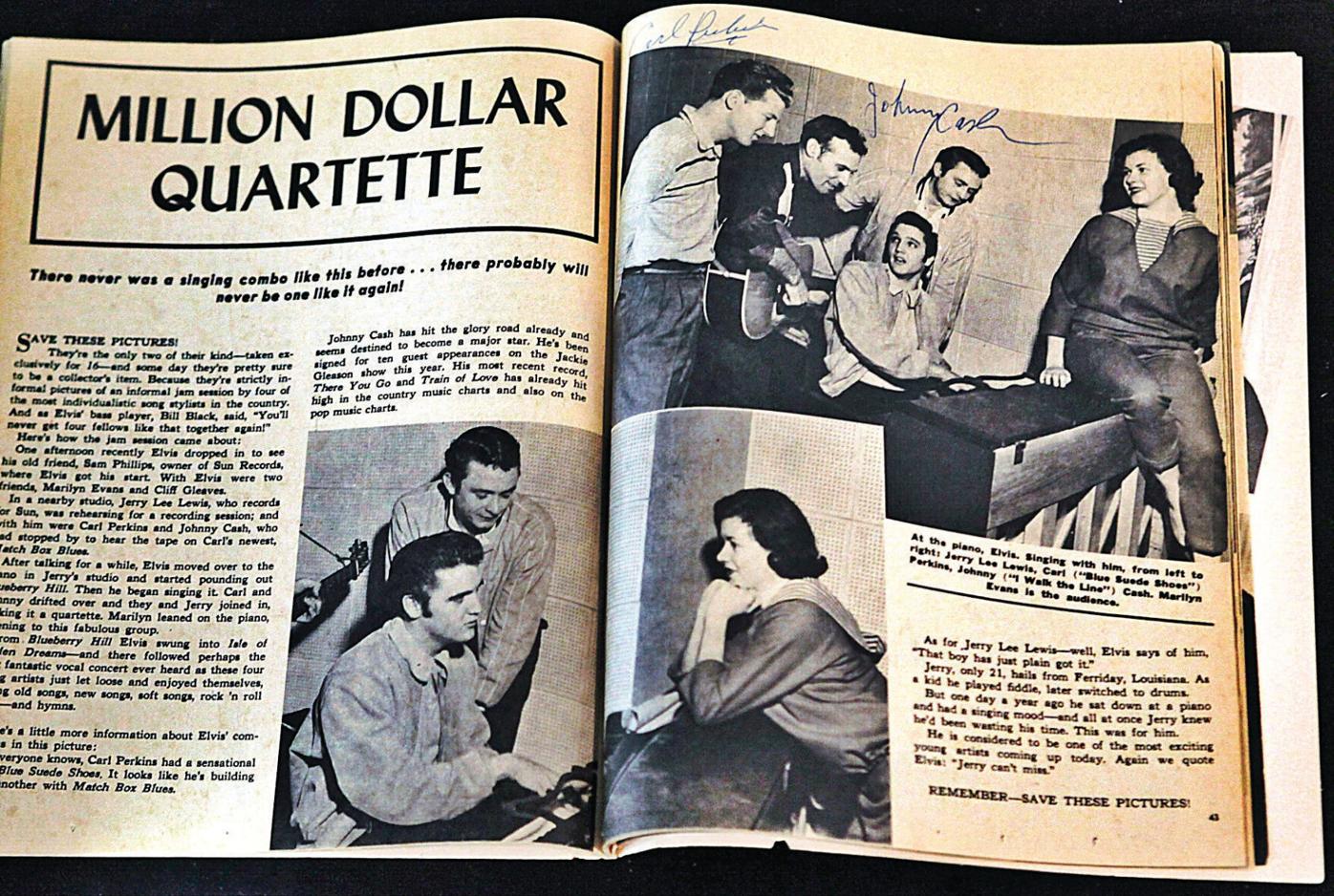 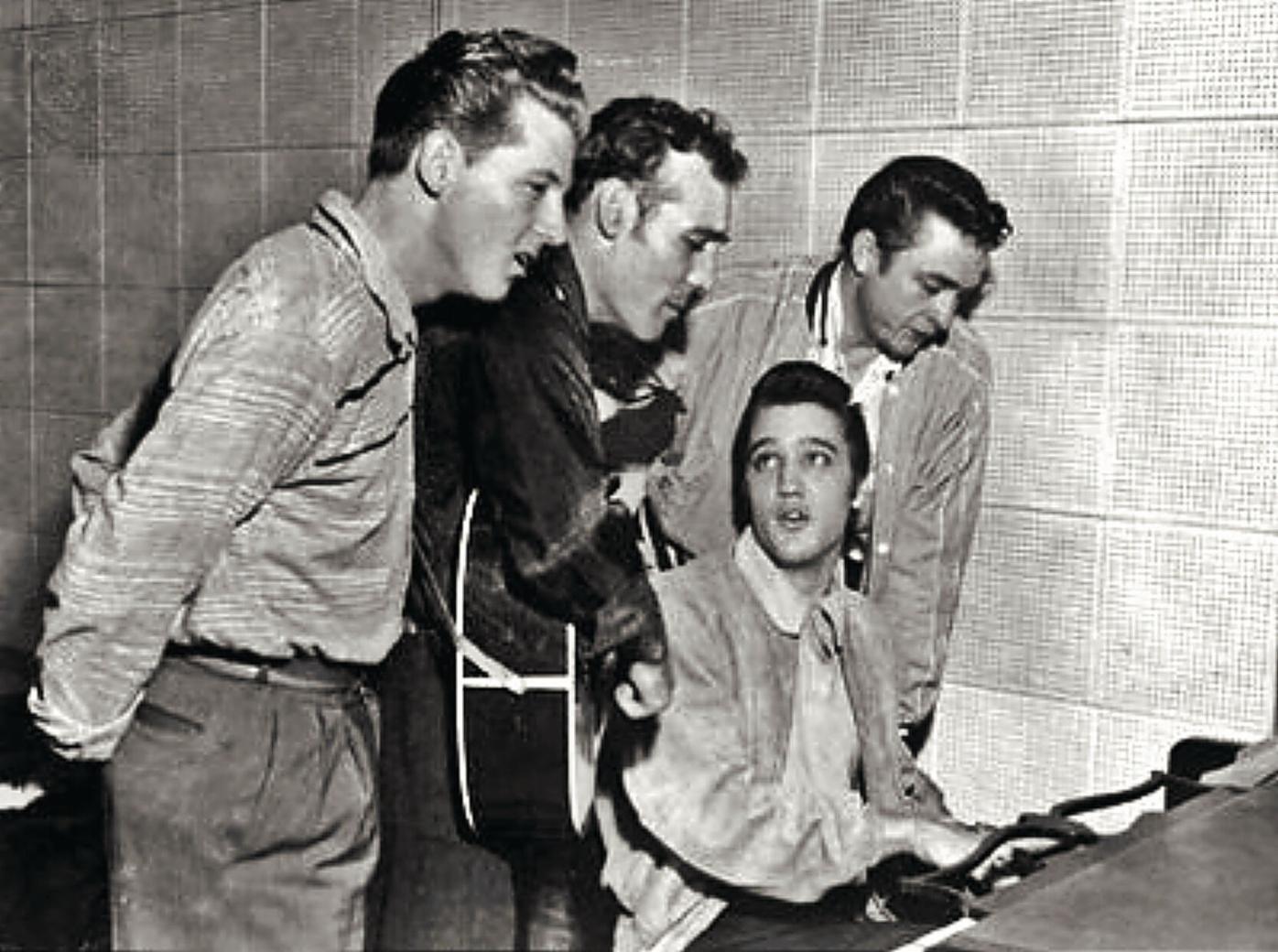 Provided photoLeft, photographer George Pierce shot this now-familiar picture of Lewis, Cash and Perkins surrounding Presley at a piano during the 1956 jam session.

Provided photoLeft, photographer George Pierce shot this now-familiar picture of Lewis, Cash and Perkins surrounding Presley at a piano during the 1956 jam session.

It was, on that overcast afternoon in Memphis on Dec. 4, 1956, a convergence. A convergence of genius, of talent of, at the time, unimaginable potential. Elvis Presley, Johnny Cash, Carl Perkins and Jerry Lee Lewis, the so-called Million Dollar Quartet became legendary over the next few decades, not because of what they were on that day, but because of what they all became over the next 20 years.

Berkshire Theatre Group is presenting a sort of recreation of that hallowed event in the musical "Million Dollar Quartet" through July 15 at the Unicorn Theatre in Stockbridge. The show is a fitting tribute to those men and to Sam Phillips, the founder of Sun Records in Memphis.

That day, Phillips had scheduled a recording session with Perkins, whose hit, "Blue Suede Shoes," had shot up the charts a few months before. Perkins showed up with his two brothers, older brother Jay, who played rhythm guitar, and younger brother Clayton, who was a bassist. In addition, the Perkins brothers were accompanied by a local session drummer, W.S. Holland.

Perkins' intent was to generate some new material for Phillips. The legendary producer was dissatisfied with the sound of the Perkins combo, which he described in a later interview as "a little thin."

So Phillips hired a local hotshot, Lewis, to help fill in the sound on piano. Jerry Lee Lewis, at the time, was well-known to the Perkins brothers as a kind of a high-energy guy and they had no objection.

At some point in the afternoon, and accounts differ as to the time, 21-year-old Elvis Presley, formerly of Sun, now a rising star at RCA, stopped by the studio to pay a visit to Phillips. He was accompanied by his then-girlfriend, Marilyn Evans.

Presley, at this point in time, was a star. He had been performing since he was 17, and in 1956, he was already known for his (at the time) controversial live performances. He remained friends with Phillips, who mentioned Perkins was in the studio working on a few songs.

Cash, in his autobiography, "Cash," recalled that he had been at Sun for most of the day, ostensibly to get a cash advance to do some Christmas shopping. Cash was, by this time, a well-known country artist, but he had not made his national breakout.

Cash recalls that he joined the group soon after Presley walked into the studio. Casual conversation morphed into an unscripted jam.

In one sense, it was a pretty standard jam session. A check of the track listings in the disc released in 1987 reveals that the group concentrated on songs all four knew. The men shared a Southern Christian heritage, and thus, many of the tracks were gospel songs such as "Just A Little Talk With Jesus," "Jesus Walked That Lonesome Valley," "I Will Not be Moved" and "On The Jericho Road."

The quartet had warmed up with a few holiday songs, including "Jingle Bells" and "White Christmas."

From gospel, the quartet moved on to bluegrass, with several songs by Bill Monroe, including "Little Cabin Home on the Hill," "Sweetheart You Done Me Wrong," "Summertime Is Past and Gone" and "I Hear A Sweet Voice Calling."

There were a few Chuck Berry numbers thrown in, including several takes of "Brown-Eyed, Handsome Man," as well as Berry's "Too Much Monkey Business."

It's important to note that most of the 46 selections were only snippets of songs. One of the four, usually Presley, would start a song, a few verses would be sung, and the group would move on. The whole jam session lasted a little more than an hour. Some of the "songs" are just 10, 20, 30 seconds long, sometimes because not everyone knew the words or the melody. It was a very informal situation.

The most important player in this scenario, in terms of anyone getting to hear all this, was engineer Jack Clements. Clements saw the four men chatting and appearing ready to jam and recalled in an interview years later that he thought to himself, "I'd be remiss if I didn't record this." So he did.

After a little more than an hour, Presley and Evans quietly left. Cash walked out too, a few minutes later, leaving Perkins, Lewis and the band to begin what they had actually come to do.

Meanwhile, Phillips was also intrigued by the session. He called a reporter friend, at the local Memphis Press-Scimitar, Bob Johnson. Johnson arrived with photographer George Pierce, who shot the now-familiar picture of Lewis, Cash and Perkins surrounding Presley at a piano.

Johnson, too, knew what he had. The next day, the story ran under the headline "The Million Dollar Quartet."

The rest is history, albeit lost history for many years. The tapes of the session sat in the Sun vaults until 1969, when Nashville record producer Shelby Singleton bought Sun. Singleton's interest was in Sun's considerable catalog, which had literally thousands of hours of material, much of it unreleased. His aim was clear. Singleton had a deal with Charly, a London-based British label, to reissue portions of the Sun catalog in Europe.

By his own count, Singleton listened, over the course of several months, to more than 10,000 hours of tapes from the Sun vault. It is not known who actually found the sessions, Singleton or a Charly producer. But, like Phillips, they knew what they had. In 1981, 17 of the 46 cuts were issued as "The Million Dollar Quartet" on the Charly/Sun label. in Europe.

The entire session was released in Europe on the same label in 1987. But it wasn't until 1990 that RCA made a deal with Charly, and issued the sessions in the States, also titled "The Million Dollar Quartet."

By then, of course, all four artists were larger-than-life icons. Presley had died years earlier, in 1977, but the other three survived. There were, in fact a few "reunion" albums.

But the magic of that afternoon in 1956 was to be found only in those amazing recordings.