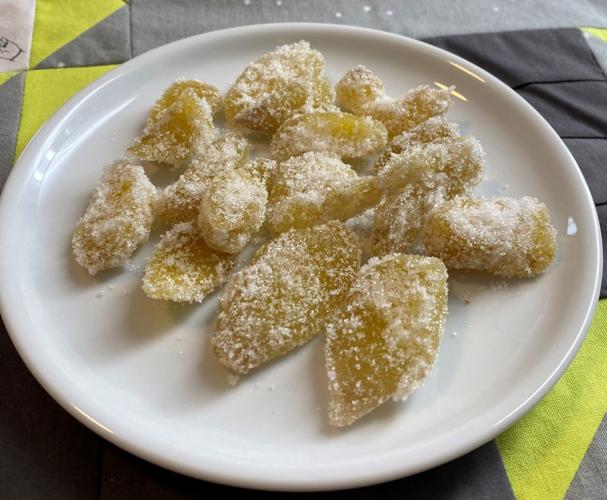 Candied ginger is great on its own as a snack. 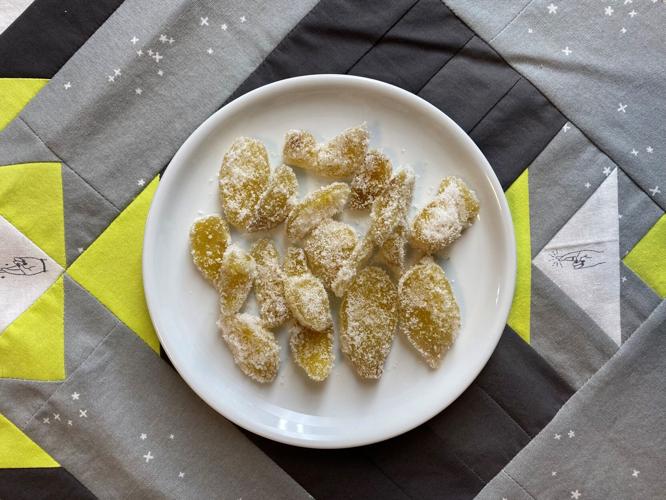 Candied ginger is great on its own as a snack, but it’s also amazing as a topping for granola, apple crisp, in pies ... you get the idea. 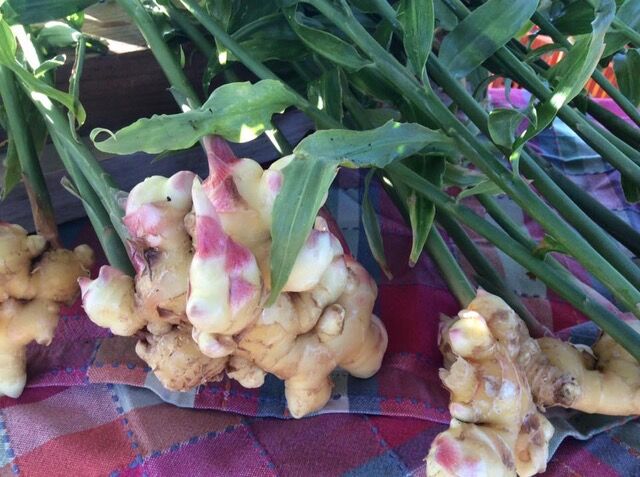 Fresh, young ginger is entirely different from what you can get at the grocery store. It’s lighter in color, an almost glowing yellow, and it’s incredibly tender where standard ginger tends to be woody and rough.

There are some treasures to be found at local farmers markets this time of year, including fresh ginger, which strikes me as an astounding thing to grow in a region with such a long winter. My CSA farmer recently emailed shareholders, offering us the first shot at purchasing her ginger crop, and I jumped at the chance.

Fresh, young ginger is entirely different from what you can get at the grocery store. It’s lighter in color, an almost glowing yellow, and it’s incredibly tender where standard ginger tends to be woody and rough. I bought a pound of ginger for $15, which included the leaves (saving those for broth), and froze most of it in thumb-size chunks, perfect for grating into all my winter curries, soups, and stir frys.

But this kind of market treasure deserves to be celebrated in its purest form, too. I love candied ginger, so I set out reading recipes, and it turns out it’s not that hard to make. It just takes a while to dry after a minimal amount of active time slicing and boiling.

Candied ginger is great on its own as a snack, but it’s also amazing as a topping for granola, apple crisp, in pies ... you get the idea. Adding fresh ginger to something like an apple pie would likely offer a very strong flavor that would be a turnoff for many people; candied ginger pieces, cut into the size of chocolate chips, are like little jewels of flavor to discover.

This recipe also gives you ginger water, a super strong, spicy tonic that my husband and I sipped while waiting for our candied ginger to dry, and ginger simple syrup, which is incredibly delicious and versatile.

Freezer-friendly casseroles for when you don't want to cook

I made my ginger in the classic style, rustic-cut with a sugar coating, but you could skip that final step and store your ginger in the syrup. That’s “stem ginger,” sweetened ginger boiled in syrup, then sold in jars, syrup included. If you watch the Great British Baking Show, you’re probably familiar with this (I definitely Googled it while watching the new season).

If you do see fresh ginger at your local market, jump on it! I have also seen it sold at winter holiday markets—like “regular” ginger, it stores pretty well, so you may see it appear here and there as the snow begins to fall.

1 cup sugar plus sugar for rolling

If your ginger is very fresh, there’s no need to peel it. If you have store-bought ginger, peel with a vegetable peeler.

Slice ginger into bite-size pieces around 1/8-inch or 1/4-inch thick. You can spend time slicing the pieces into uniform shapes or go for a more rustic look, which will utilize more of your ginger. Boil ginger slices in water for 30 minutes, until soft.

Add ginger slices, 1/2 cup ginger water, and 1 cup sugar to pot, then bring to a boil. Turn down to medium, then let simmer, stirring occasionally, for 30-40 minutes. Strain ginger, reserving the delicious ginger syrup, and let ginger pieces cool on a baking rack or piece of parchment paper for at least two hours so they are sticky, but not moist. Roll in sugar, then let dry in the refrigerator overnight, uncovered. Ginger pieces should keep for a couple of weeks.

Note: This recipe makes two awesome byproducts: A strong ginger water that is great for sipping, mixing with seltzer or whiskey, or stirring into tea, and ginger simple syrup, which is amazing as a sweetener in anything, on pancakes, on granola or oatmeal, on ice cream. The ginger water may not be your cup of tea but don’t discard that syrup!