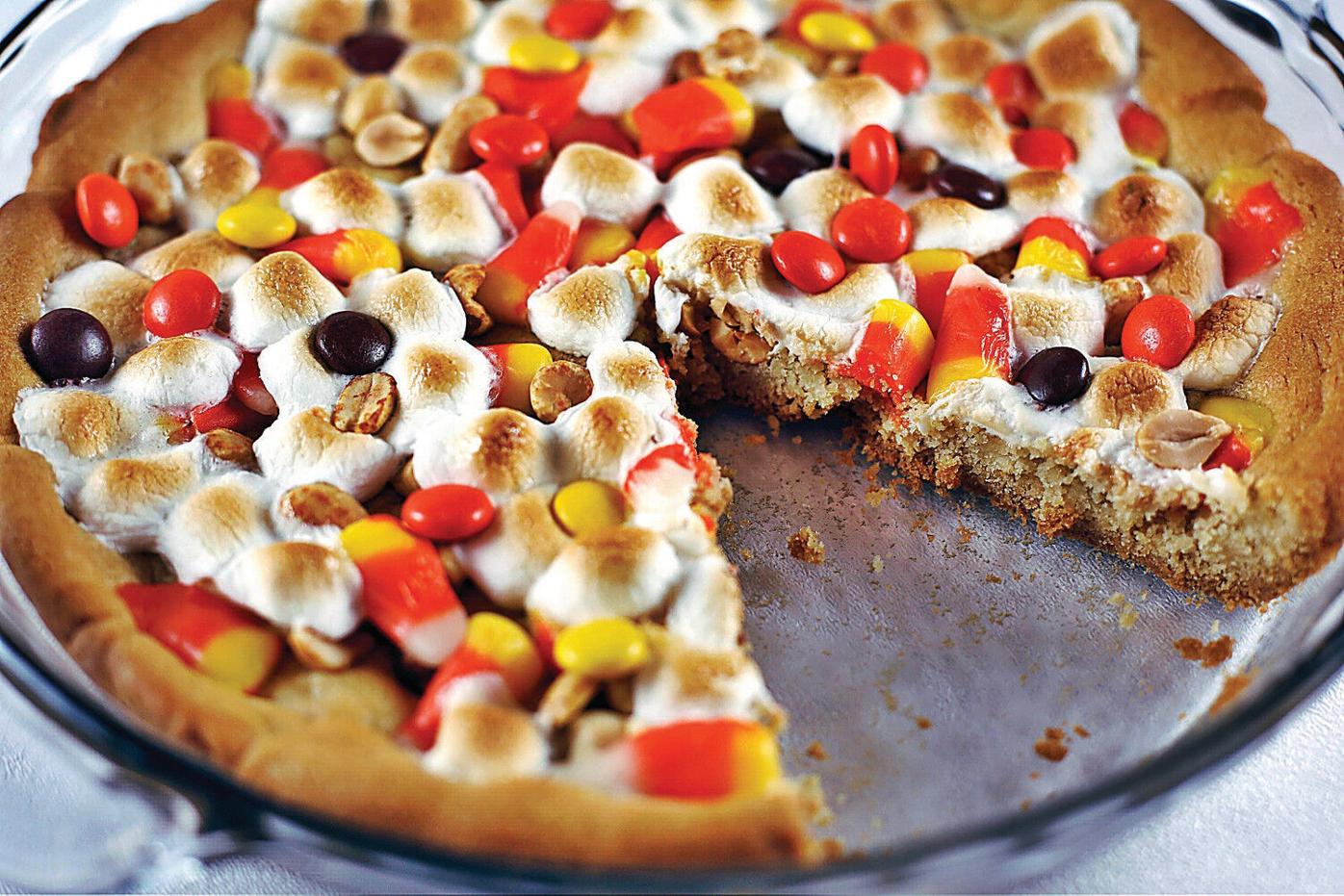 Peanut Butter Candy Corn Pizza is easy sweet treat would be worth trying for a busy Halloween night. The best part? It uses a roll of store-bought cookie dough. 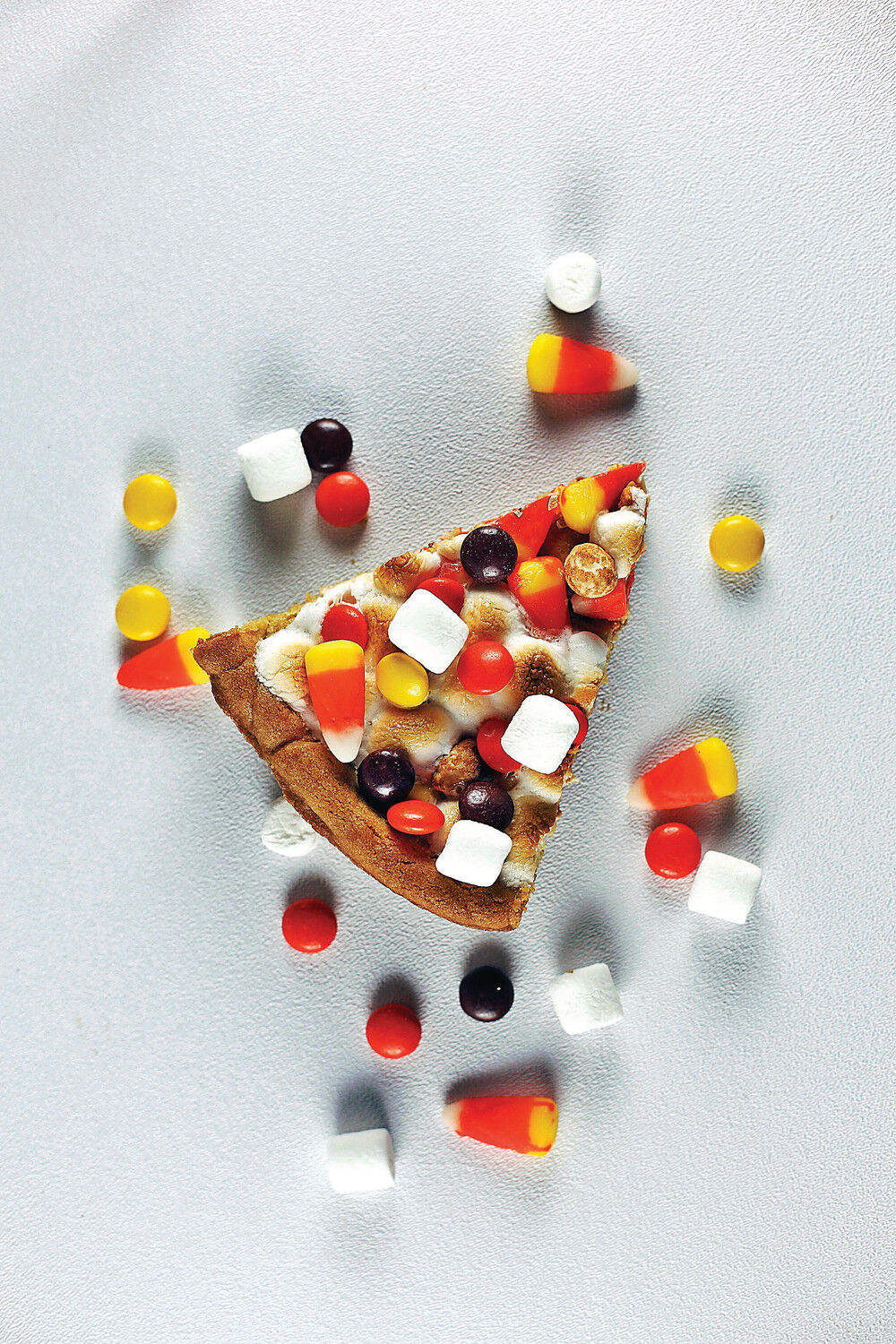 Peanut Butter Candy Corn Pizza is great if you're stuck with some leftover Halloween candy. 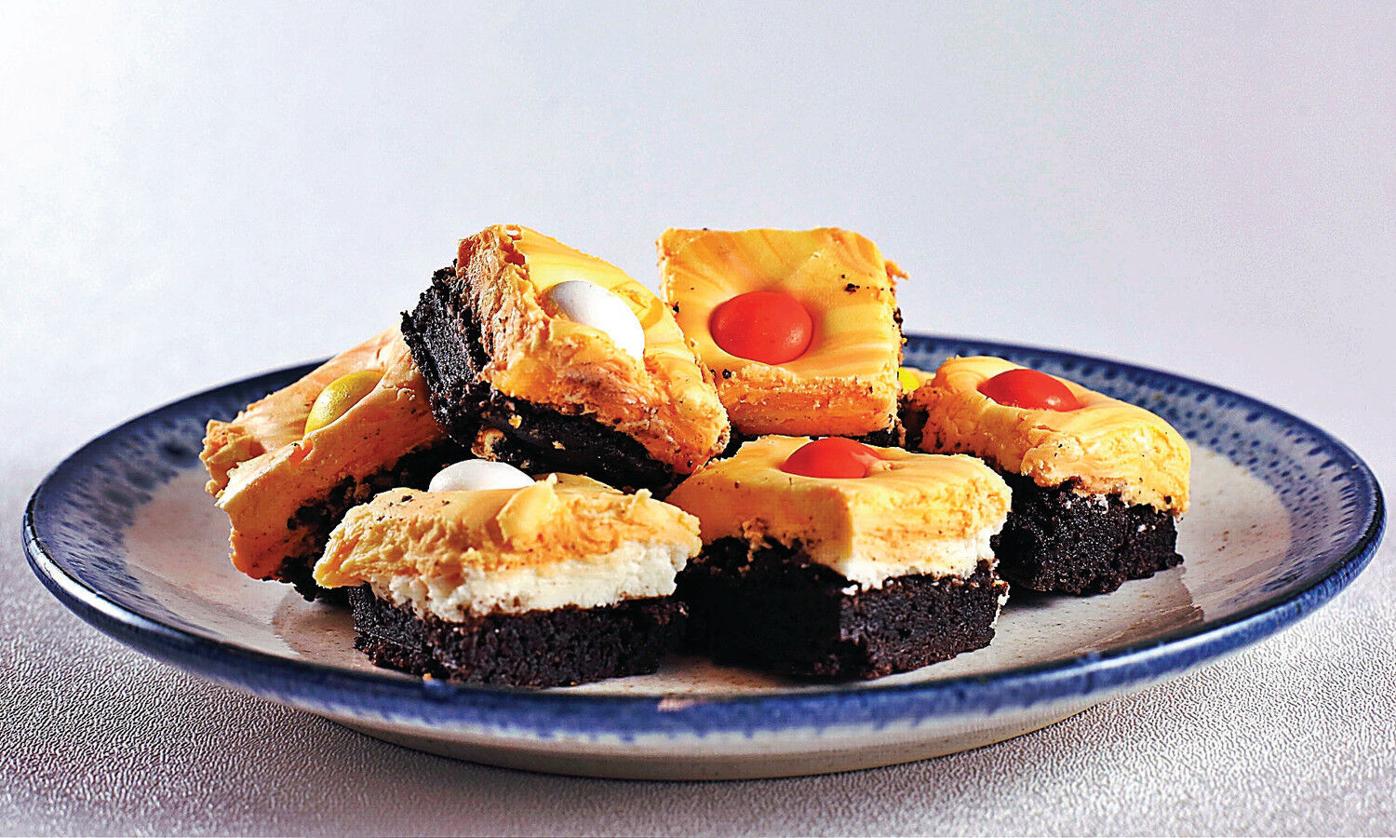 For a last-minute Halloween treat, Candy Corn M&M Fudge Brownies couldn't be easier - they start with a package of brownie mix. 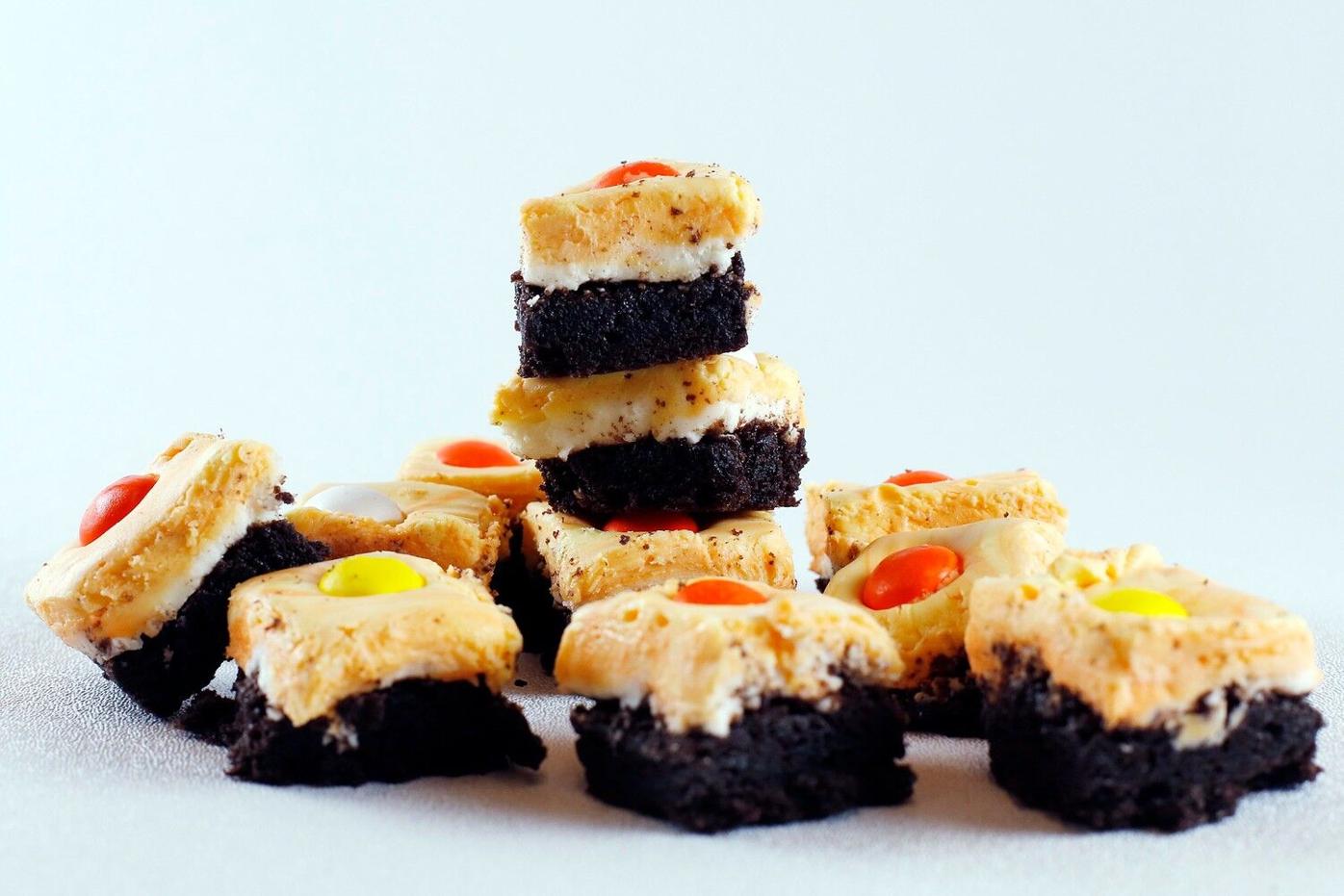 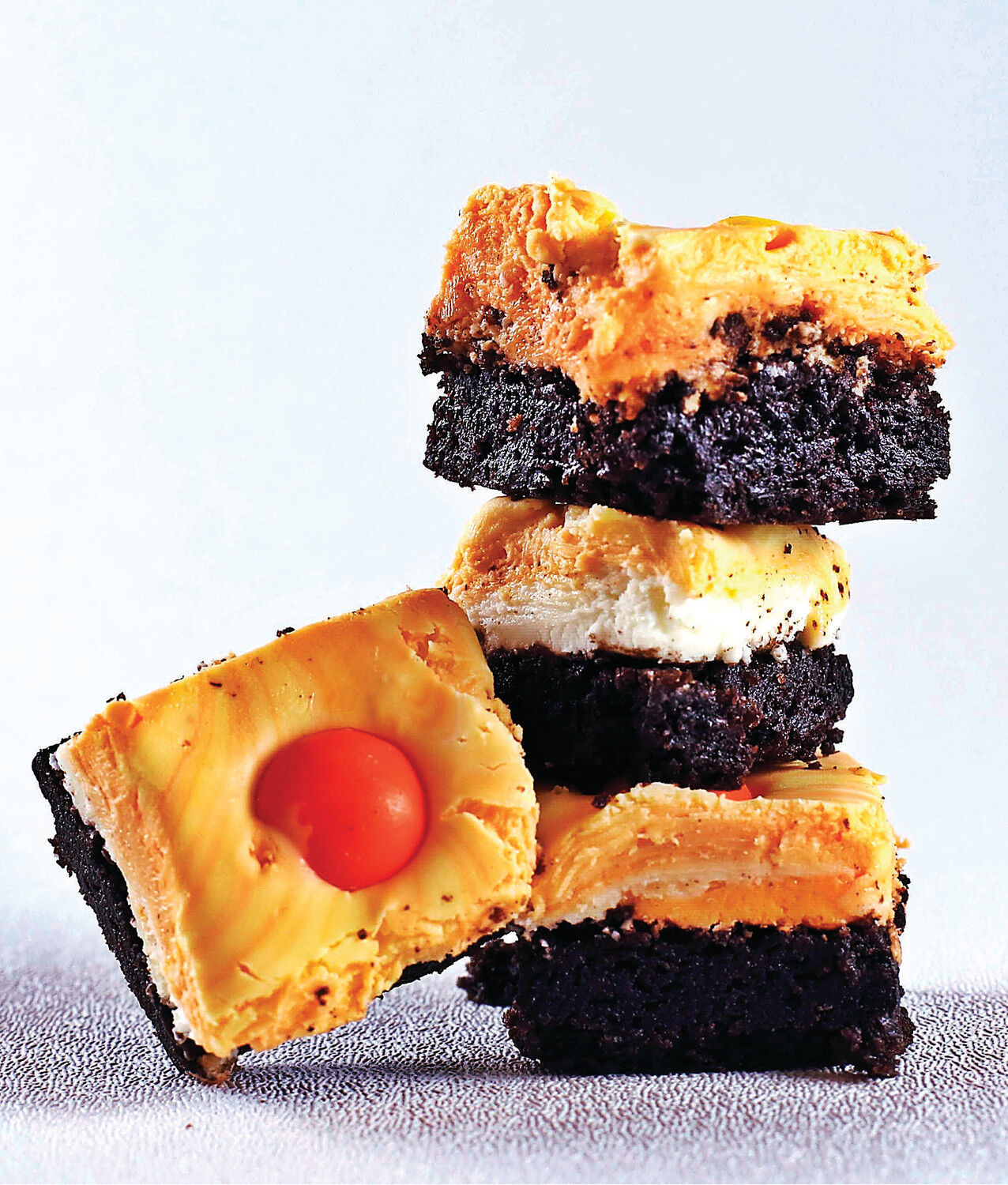 Peanut Butter Candy Corn Pizza is easy sweet treat would be worth trying for a busy Halloween night. The best part? It uses a roll of store-bought cookie dough.

For a last-minute Halloween treat, Candy Corn M&M Fudge Brownies couldn't be easier - they start with a package of brownie mix.

It's almost Halloween and scary things are everywhere (like a pandemic). This year, we may be getting back together with small parties, or our children may be having masked events at school. The first instinct is to head to the store, but store-bought treats just aren't the same as homemade.

Haunting cocktail ideas for a Halloween at home

Both of these recipes are on the sweet side (candy corn is a main ingredient, after all) and both use a ready-made store-bought starter to make the baking process faster, something we could all use this Halloween in between handing out candy or putting together last-minute costumes.

My choice was Candy Corn M&M Fudge Brownies. I had no idea there were such things as candy corn-flavored M&Ms, and my search for them at a local big box store also yielded pumpkin pie M&Ms (I should have seen that one coming ...). The recipe starts with a 9x13-inch pan of fudge brownies made from a mix. I used the directions on the box for the fudge brownies, not the cake-like brownies. The cooled brownies are then topped with a fun candy corn-colored fudge and the candy-corn M&M candies. Don't let the 4 1/2-hour prep time fool you. Four of those hours are for letting the brownies chill in refrigerator, ideally while you chill with a glass of wine and a good book.

I followed the recipe exactly, and the results were awesome. But you all know me, there isn't a recipe I haven't tweaked the second, and sometimes the third and fourth, time I make it. On my radar would be making the cake-like brownies to have a thicker and not as dense base. Another tweak would be to leave the majority of the fudge white and tint smaller portions of it orange and yellow, instead of dividing it into equal thirds. The white ended up not being visible once I swirled the molten candy on top of the brownies. I also gave up trying to stand the M&Ms upright. And about getting 72 squares out of that pan, not in my lifetime.

Bake the brownies in a greased 9x13 pan according to the box directions. Let cool completely.

In a large saucepan combine the chocolate chips and sweetened condensed milk over low heat. Stir until melted and creamy. Add the marshmallow cream and stir until creamy again. Divide the melted fudge into 3 glass bowls.

Use a toothpick to add a small amount of the gel food coloring to two of the bowls. Slowly add more color until it is the desired color. If the fudge starts to thicken, place in the microwave for 20-30 seconds. After you have the three colors the shade that you want, place each bowl in the microwave for 20-30 seconds and stir. Quickly drop spoonfuls of each color all over the top of the cooled brownies. After you have all the fudge spooned on, take a knife and swirl the colors. Do not swirl too much, or the colors will start to go together.

Chill in the refrigerator for at least 2 hours. Remove from the refrigerator and use a knife to score the top of the brownies into 72 squares. Place an M&M on each square. Let set for another 2 hours before cutting all the way through.

In light of the recent candy corn pizza craze, (have you seen that viral photo of the frozen pizza baked with candy corn all over it? I can't decide if it's brilliant or disgusting.) I thought this easy sweet treat would be worth trying for a busy Halloween night. It's also great if you're stuck with some leftover Halloween candy — though, we never seem to have any of that in our house. I imagine you could make any variation of this "pizza" you like.

The recipe calls for a 10-inch pizza pan, which I don't have, so I used a traditional pie plate. Therefore, my "pizza" is more of a candy "pie," but we're slicing slabs of candy goodness either way. This was super easy and even faster to make. This will most likely make an appearance at my house Halloween night after we've finished trick-or-treating.

Press the cookie dough evenly onto a 10-inch pizza pan or round casserole dish. Bake at 375 degrees for 12 minutes.

Stir together the marshmallows, peanuts and Candy Corn. Sprinkle over the hot cookie evenly. Place the pan back in the oven and cook for another 3 minutes. Turn the broiler on and toast the marshmallows for 1 minute. Keep an eye on the marshmallows while doing this — they will quickly go from brown to burnt!

Remove from the oven and sprinkle with the Reese's Pieces. Press them slightly into the warm marshmallows. Let the cookie cool completely. Run a knife under hot water before cutting 12 slices. Do not dry off the knife before cutting because the wet knife doesn't stick as much.

This 'Hocus Pocus'-themed cookbook will 'cast a spell on you'

Fans of "Hocus Pocus" can now conjure up treats and meals inspired by the 1993 cult classic with help from "The Unofficial Hocus Pocus Cookbook."