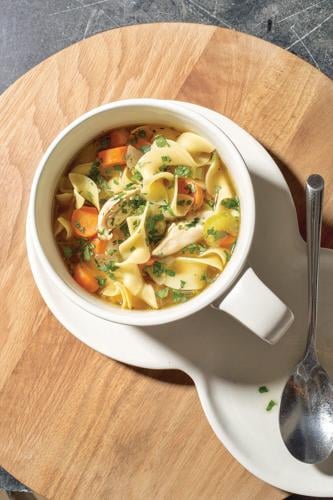 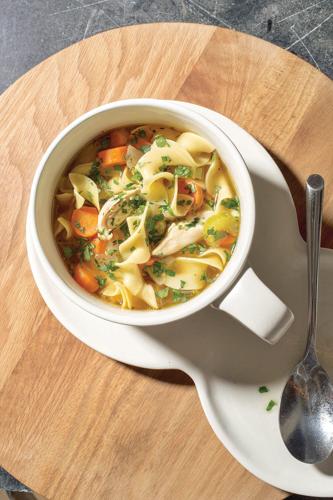 This classic rendition of chicken soup starts the old-fashioned way, by making a from-scratch broth. But instead of using a whole chicken we turned to meaty chicken thighs, which kept things easier; they also added intense, meaty flavor to the broth.

To cut down on greasiness, we removed the skin after browning and before letting the thighs simmer along with the chopped and sauteed onion and bay leaves. Since most people prefer white meat in their chicken soup, we simply poached two boneless, skinless chicken breasts in the simmering broth, removing them when tender to add to the soup at the end.

With the broth and the meat taken care of, we turned our attention to the soup with an eye toward keeping things simple and traditional. Onion, carrot, and celery and some fresh thyme fit the bill. As for the noodles, cooking them right in the broth intensified their flavor.

Note that the thighs are used to flavor the broth, but once the broth is strained, the meat can be shredded and used for chicken salad or a pot pie. If you prefer dark meat in your soup, you can omit the chicken breasts and add the shredded thigh meat to the soup instead.

For the broth: Pat thighs dry with paper towels and season with salt and pepper. Heat oil in Dutch oven over medium-high heat until smoking. Cook half of thighs skin side down until deep golden brown, about 6 minutes. Turn thighs and lightly brown second side, about 2 minutes. Transfer to strainer set in large bowl. Repeat with remaining thighs and transfer to strainer; discard fat in bowl. Pour off fat from pot, add onion, and cook over medium heat until just softened, about 3 minutes. Meanwhile, remove and discard skin from thighs. Add thighs, water, bay leaves, and 1 tablespoon salt to pot. Cover and simmer for 30 minutes. Add chicken breasts and continue simmering until broth is rich and flavorful, about 15 minutes.

Strain broth into large container, let stand for at least 10 minutes, then remove fat from surface. Meanwhile, transfer chicken to cutting board to cool. Once cooled, remove thigh meat from bones, shred, and reserve for another use (can refrigerate for up to 2 days or freeze for up to 1 month). Shred breast meat and reserve for soup.

For the soup: Heat oil in now-empty Dutch oven over medium-high heat until shimmering. Add onion, carrot, and celery and cook until onion has softened, 3 to 4 minutes. Stir in thyme and broth and simmer until vegetables are tender, about 15 minutes. Add noodles and shredded breast meat and simmer until noodles are just tender, about 5 minutes. Off heat, stir in parsley and season with salt and pepper. Serve.

Up your chicken game with these not-boring recipes

Sick of putting together the same old chicken recipes? Check out these 21 recipes to add a little life to your plate.