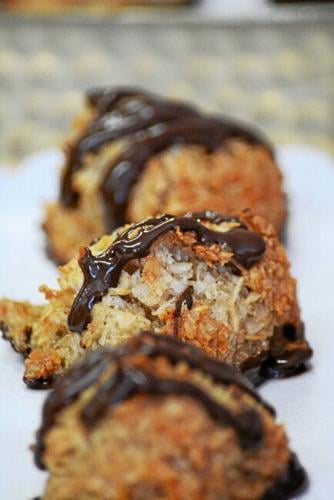 Some maple flavored macaroons made by Sharon Sutter of the A-Frame Bakery on Cold Spring Road in Williamstown. Wednesday, April 13, 2016. Gillian Jones — The Berkshire Eagle | photos.berkshireeagle.com 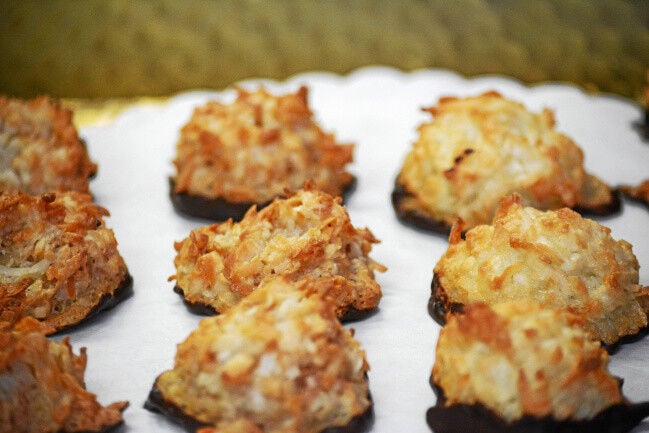 Some macaroons made by Sharon Sutter of the A-Frame Bakery on Cold Spring Road in Williamstown. Wednesday, April 13, 2016. Gillian Jones — The Berkshire Eagle | photos.berkshireeagle.com 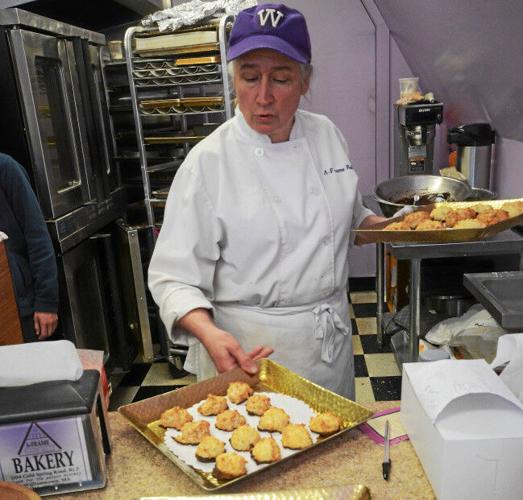 Some maple flavored macaroons made by Sharon Sutter of the A-Frame Bakery on Cold Spring Road in Williamstown. Wednesday, April 13, 2016. Gillian Jones — The Berkshire Eagle | photos.berkshireeagle.com

Some macaroons made by Sharon Sutter of the A-Frame Bakery on Cold Spring Road in Williamstown. Wednesday, April 13, 2016. Gillian Jones — The Berkshire Eagle | photos.berkshireeagle.com

Coconut macaroons are the ideal Passover dessert. The delectable treats are unleavened, flourless, made with Kosher ingredients and easy to make at home.

With the Jewish holiday beginning sundown next Friday, the dome-shaped cookie will likely be on the table of seders held throughout the Berkshires and Southern Vermont.

Passover commemorates God helping to liberate the Israelites from ancient Egypt more than 3,000 years ago. For the duration of the eight-day religious observance, Jews eat unleavened baked goods as their ancestors did when they fled Egyptian captivity with only unleavened bread to eat.

Whether for Passover or a year-round indulgence, coconut macaroons are baked to a golden brown — sometimes darker — and often are topped or bottomed with chocolate, preferably bitter-sweet morsels

"The chocolate ones seem to sell the best," said Livia Landry, former owner/baker of Sweet and Savoury on Main in downtown Stockbridge.

Chocolate or not, consistency makes for a top-notch macaroon, according to Sharon Sutter, owner/baker of A-Frame Bakery in Williamstown.

"They are crunchy on the outside, chewy on the inside — that's what people expect from a macaroon," she said.

What A-Frame, Amy's and other area bakeries featuring coconut macaroons pride themselves on is using as fresh and natural ingredients as possible.

The cookies are basically shredded coconut, sugar, salt, vanilla and egg whites — the last item key to pulling the macaroon together and keeping them white inside.

"The egg whites bind the ingredients, otherwise the recipe won't work, and besides, macaroons aren't supposed to be yellow," Landry said.

Matt Schweizer, executive chef of Haven Cafe and Bakery in Lenox prefers to use the entire egg.

"Using the whole yoke provides the fat that gives extra flavor," he said.

Given how basic coconut macaroons are, they are ripe for experimentation.

"I like maple as it's all around us," Sutter noted. "The maple ones also have cane sugar that gives them an extra crunch."

Schweizer is prepared to fire up the test kitchen and practice taking coconut macaroons to a new level.

"We're going to take the base and play with it, maybe add hazelnuts and make them bigger — essentially a macaroon cake," he said.

Combine all ingredients (on Kitchen-Aid mixer using the paddle attachment or by hand). Scoop onto parchment-lined baking sheet using ice-cream scoop (with release mechanism) or form into balls of desired size (by hand). Bake at 325 degrees F. until golden brown. Let macaroons cool and, if desired, dip in chocolate ganache or melted chocolate. Enjoy!