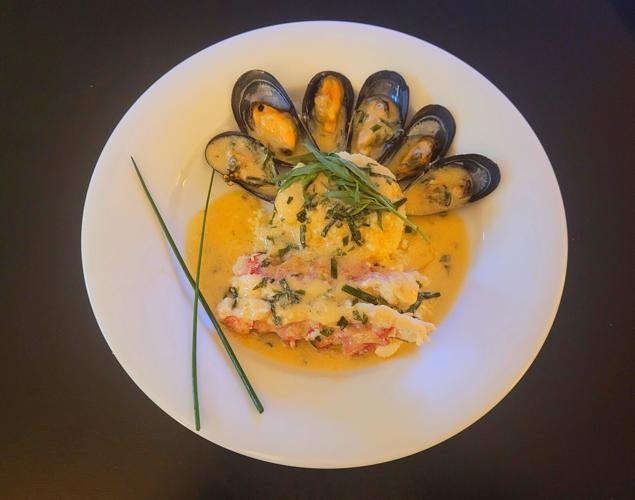 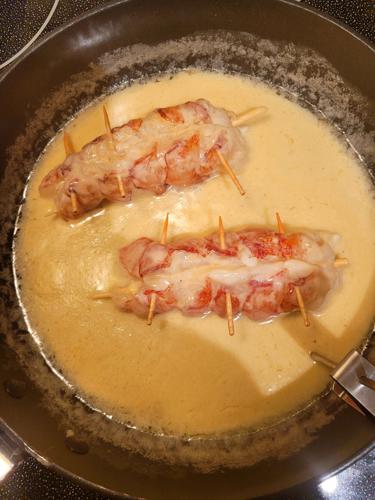 After butter-poaching lobster tails a time or two, you’ll find the process is not difficult at all.

I recently returned to my old stomping grounds on Cape Cod to visit my beautiful niece, Daven, and her husband and my good friend, Benn. It was only the second time the Lovely Lois and I had left Berkshire County since March 2020, and the first time we had seen them in person in almost two pandemic-riddled years.

Besides being my niece whom I held as a baby, Daven worked with me in my family’s restaurant on the Cape during the 1980s for 10 years. Her loving and loveable husband, Benn, and I have had many adventures over the last 30-plus years enjoying each other’s company. There were countless times we’d fish on Cape Cod Bay on one of his string of boats for as long as 12 hours at a time — or until the beer and sandwiches ran out.

Whenever I visit Daven and Benn, we all throw any pretense of sticking to a healthy diet to the wind. Thankfully, they’re both excellent cooks and one of the many reasons I love them is they have their priorities straight. When we started making plans for our visit, they immediately began suggesting what we’d have for dinners on our long weekend together. They usually decide on the menus and prepare the food, while I provide the wine, beer, cheese and Berkshire County treats.

We were thrilled to learn they chose to go with steamed lobsters on the evening of our arrival. I chose to bring a couple of bottles of one of my favorite rosés, Mimi’s Grande Réserve Rosé from Provence to help celebrate our reunion.

On our trip out to Cape Cod, we endured the obligatory miles-long Friday afternoon backup onto the Cape via the Bourne Bridge, but I was spurred on by dreams of lobsters dancing the hokey pokey in my head. Before going to Daven and Benn’s, our first stop was the Kream N Kone in Dennis for a late lunch on its deck next to the Swan River. Despite the name, it’s a mostly fried seafood joint, where you order at the counter and they give you one of those number sticks to find you when they bring out your order.

Keeping with tradition and my lust for deep-fried, whole-belly clams, I seek out a plateful whenever I go to the Cape. I was not disappointed by my excellent heaping paper plate of fried clams, French fries and onion rings, chased down with a beer from Cape Cod Beer, while Lois, who can never get enough lobster, contented herself with a lobster roll. Forget about natural supplements, crystals or meditation to help calm jangled nerves from the longish and sometimes frustrating ride down. Crispy, fried whole-belly clams bursting with juicy Atlantic Ocean goodness and a cold beer provided all the serenity I needed.

That evening, we all sat in Daven and Benn’s backyard in Brewster on a coolish mid-June evening tearing into steamed 2 1/2 pound lobsters and grilled local-to-Florida corn. The lobsters were perfectly steamed and needed nothing more than sides of melted butter, a roll of paper towels, lobster shell crackers and wooden skewers pressed into service as picks. I was in heaven surrounded by people I love with butter infused lobster juices dripping from our chins, while Ajax, the sweet, nonstop-frisbee-chasing yellow lab, and Bruce, the perpetually hungry beagle, roamed beneath our feet hoping for a dropped morsel or two. I do have to admit I purposefully dropped a bit here and there. As night fell and we all became increasingly contented, their neighbor’s peacocks interjected their jungle screeches and Bruce howled his beagle howl at intruders, real or imaginary, only he could sense prowling the perimeter of his territory.

While still dreaming of lobsters dancing in my head and deciding on another evening of decadent dining, I decided to butter-poach lobster tails after I got back.

Frozen Maine or cold-water lobster tails are available online and from some local stores, such as Guido’s. After butter-poaching lobster tails a time or two, I think you’ll find the process is not difficult at all.

A cautionary note: Raw lobster meat decomposes quickly, so it’s best to thaw overnight in the refrigerator the night before using.

2 defrosted, raw cold-water lobster tails 5 to 6 ounces apiece (the equivalent of a tail from a 1 1/2-pound lobster)

12 mussels, soaked in cold water for a few minutes and debearded. Toss any mussels with broken shells or which don’t close after soaking.

Salt and pepper to taste.

Begin cooking the couscous by bringing the water to a boil in a small saucepan with the butter and salt. Add the couscous, stir and remove from the heat.

Add the heavy cream to the saucepan with the shallots and tarragon sprig and reduce by half over low heat. This will only take a minute or two. Lower the heat so that the heavy cream is just barely simmering and begin whisking in the 1/4 pound of butter two pieces at a time waiting for the pieces to become fully emulsified before adding more. Once the butter has become fully emulsified into the sauce, strain the sauce with a fine sieve into a medium sauté pan with a cover.

Pack the cooked couscous into a 1/2-cup dry measuring cup and tap firmly on the bottom of the measuring cup while holding it bottom side up on each warmed dinner plate until it comes out in one mound. Remove the lobster tails from the pan and remove their skewers and toothpicks. Microwave the mussels for 10 seconds to warm. Arrange the mussels and lobster around the couscous while finishing the sauce.

Add the chopped chives and tarragon to the sauce and whisk in the additional butter and heavy cream to fully emulsify the sauce. Even a salt hound like me didn’t need any additional salt and just added some grindings of pepper. Using a rubber spatula transfer the sauce to a 2-cup liquid measure and drizzle over all. Garnish with chive and tarragon sprigs.

Is there anything better than fresh fish in the summer?

We’re very routine-oriented in this household, including Rudy the Cat. The Lovely Lois begins her morning routine during the week, getting her…

There are times when I’m out doing my weekly grocery shopping — rushing through the supermarket as quickly as I can, avoiding crowds as much a…

This authentic Italian pasta dish is perfect for weeknight cooking

In so many ways, food defines cultures and brings people together. A well-prepared meal can transport me to its country of origin in much the …

My earliest cooking chops were formulated in restaurants on Cape Cod many years ago. At that time, it was almost unheard of to not have New En…

Our readers have spoken: These are the Berkshire Eagle's 10 most popular recipes of 2021

1. A long braise beef stew Elizabeth Baer calls "one way to warm up the house on a chilly day!"

No seashore vacation is complete without days at the beach and plenty of seafood. I had my fill of sea scallops, sampled some outstanding lobster and tried clams. However, it was a shrimp scampi my friend, Rich, made at the campground that won the seafood honors for the vacation.