A nostalgic conversation about puddings enjoyed during her childhood sent Maggy Button searching her community cookbooks for this frozen lemon dessert. 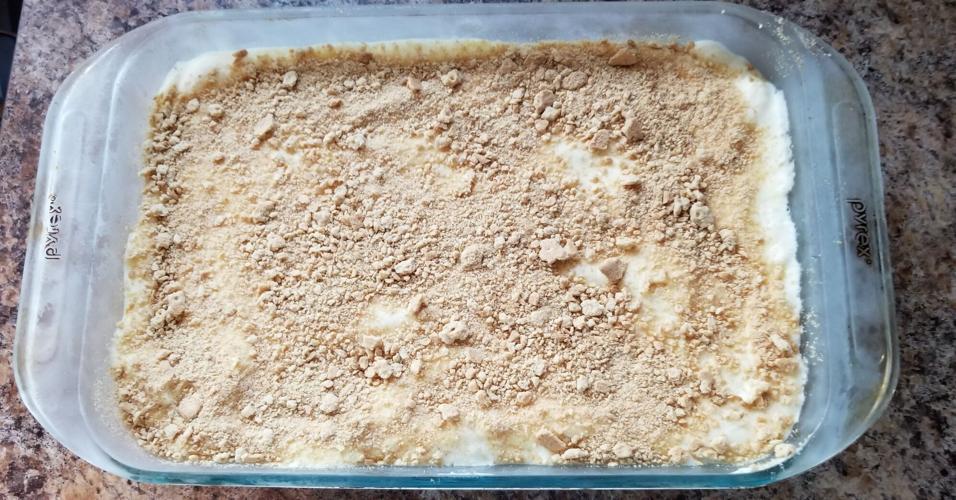 “We liked it more than ice cream. It was fantastic,” the author's friend said of a frozen lemon pudding dessert his mother made for the family.

There’s been little going on in my life. Back issues have put me literally on the couch or my bed for a few weeks. I’ve taken advantage of my down time to binge-watch way too many TV shows, read over 25 books and try to weed out the thousands of recipes I have. I think I only threw out three …

One night, while texting a friend in New York, we discussed puddings we had been raised on — grapenut, rice, bread, tapioca — and how they weren’t as popular now. He recalled his mother had made a lemon dessert that she froze and then served, adding “We liked it more than ice cream. It was fantastic.” When I pressed him for what else he remembered about it, he said it had lemon Jello, a can of evaporated milk and crushed honey graham crackers on the top and bottom. He also said she made it in the old-fashioned metal ice cube trays without the separators. He added the recipe was at least 70 years old and it had been inexpensive to make, which was good because his family didn’t have much money.

Intrigued, I started looking for the recipe the next day, going through all the community and church cookbooks I’ve accumulated through the years. And there it was — although each recipe was a bit different and the dessert had myriad names. Some of the recipes called for it to be frozen, others to set up in the refrigerator. Some of the recipes called for more sugar, more water, no juice or zest, and the amount of graham cracker crumbs varied widely.

The recipe I chose to try was called lemon bisque — I have no idea why because it has nothing to do with soup. What I can’t stress enough is to thoroughly chill the mixer bowl, whisk attachment and can of evaporated milk in order for the milk to whip — I chilled them overnight. I also froze the dessert, first serving it frozen, and then let it sit on the counter to thaw and become more like a pudding. It was great both ways. My friend claims it was sweeter than his mother’s, but still good.

You know where I’m going with this recipe … I’m going to try lime gelatin, zest and juice next time and maybe play around with raspberry gelatin and fresh raspberries another time. There are endless possibilities!

One 12-ounce can evaporated milk

Dissolve sugar and gelatin in boiling water in a bowl. Stir in lemon zest and juice. Refrigerate until mixture is thickened, but not completely set, about 90 minutes.

Spray a 9-by-13-inch baking dish with cooking spray and coat with 1/2 cup of of graham cracker crumbs. Using a stand mixer fitted with a the whisk attachment, whip the evaporated milk on medium high speed until soft peaks form, about 5 minutes. Using a clean, dry mixer bowl and whisk attachment, whip the chilled gelatin mixture until thickened and light lemon colored, about 4 minutes.

Using a large spatula, fold the gelatin mixture into the the prepared baking pan and smooth top. Sprinkle remaining graham cracker crumbs evenly over top. Cover and refrigerate until fully chilled and set, at least four hours or overnight.

Tip: Chill the mixer bowl, whisk attachment and can of evaporated milk ahead of time.

Thinking of hosting a garden tea party? Make sure these ginger scones are on your table