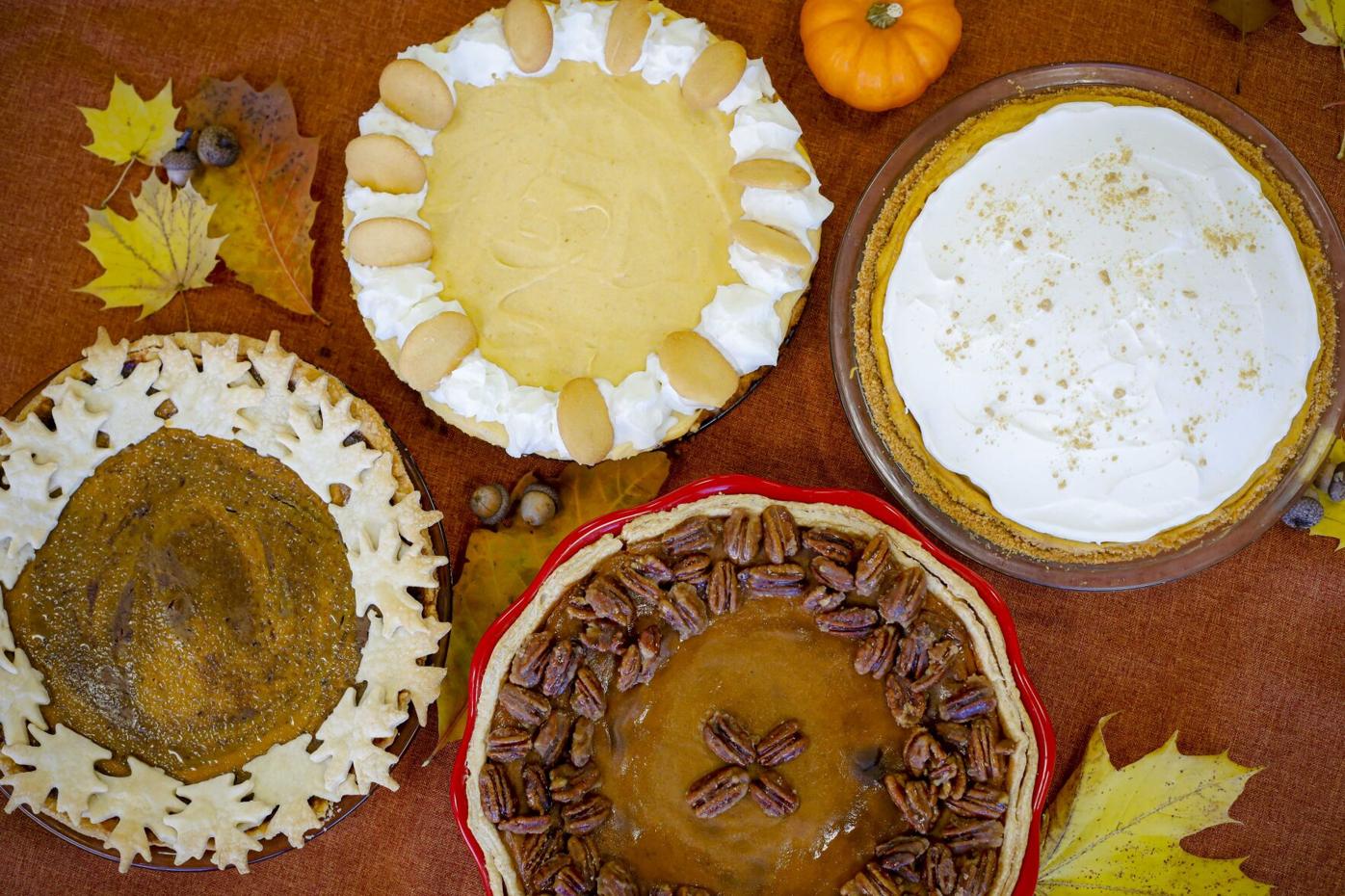 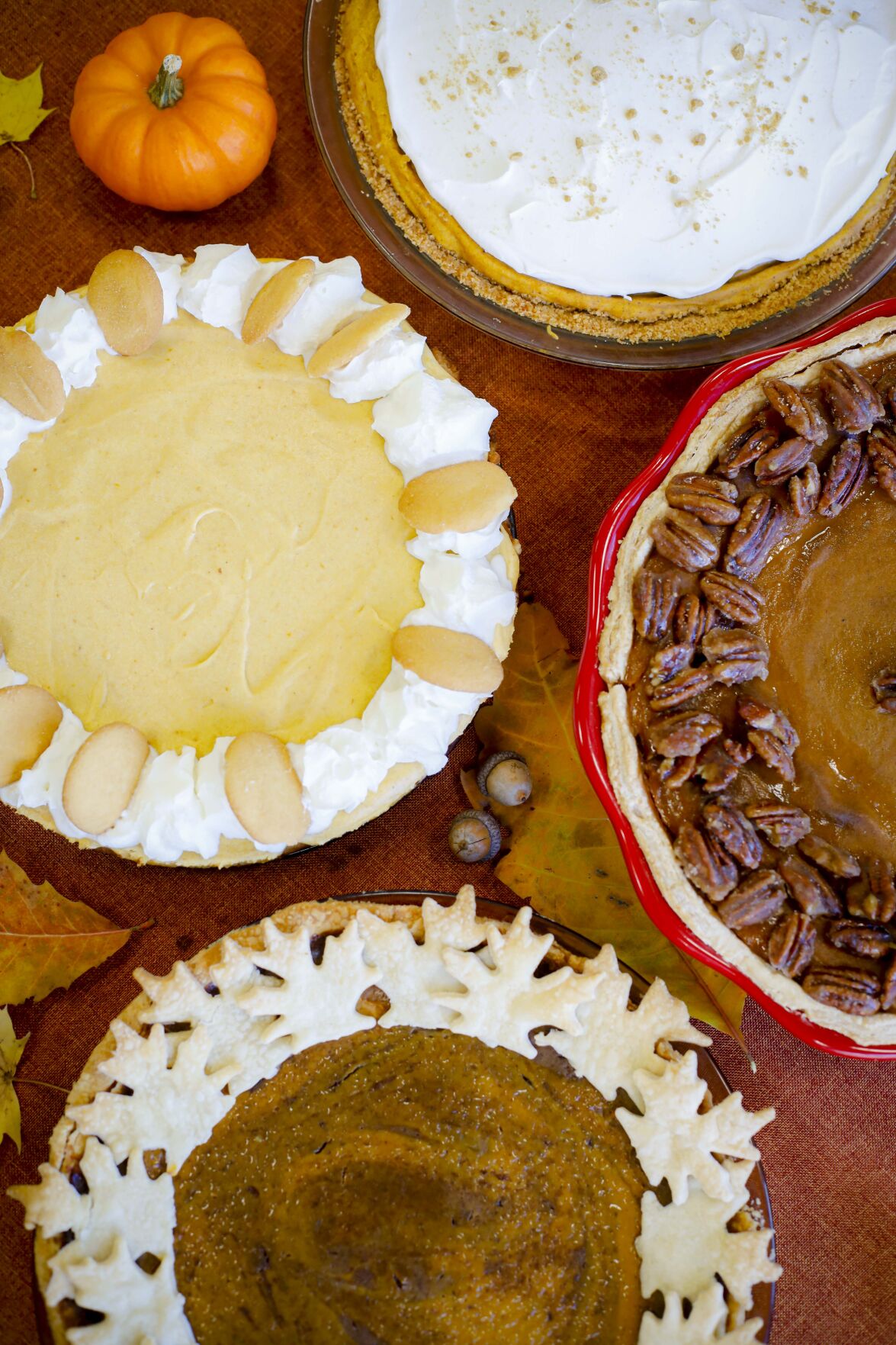 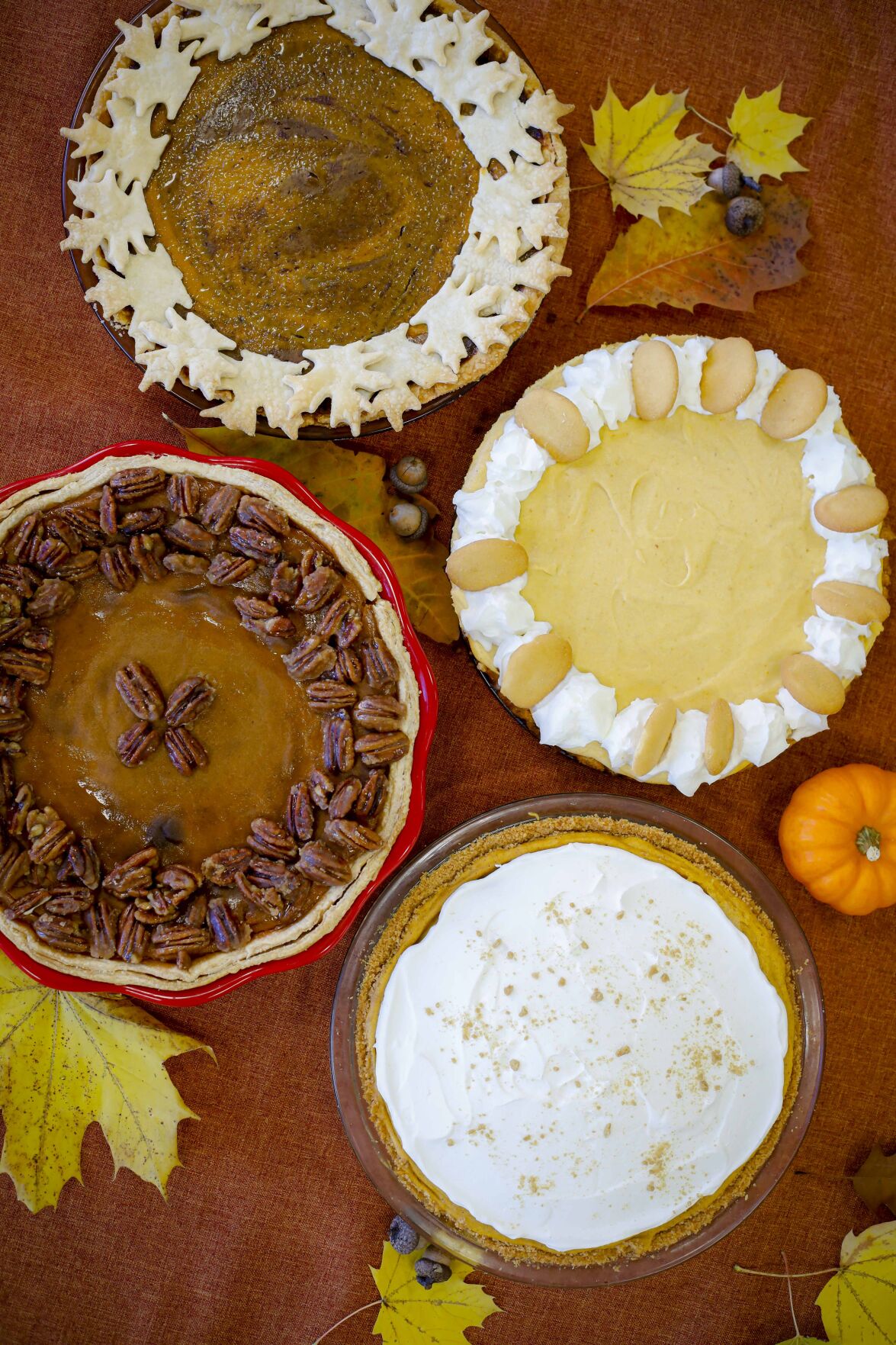 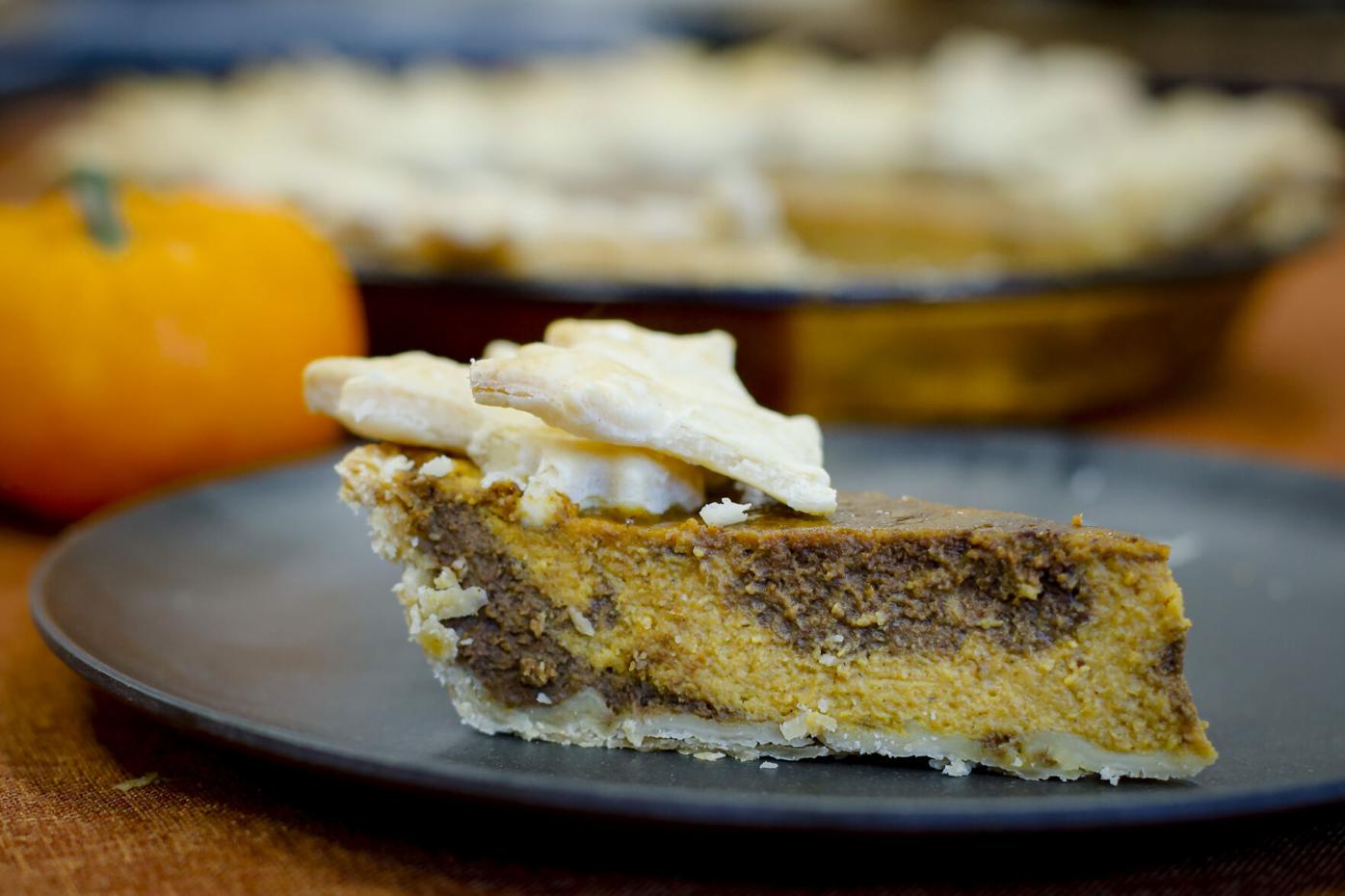 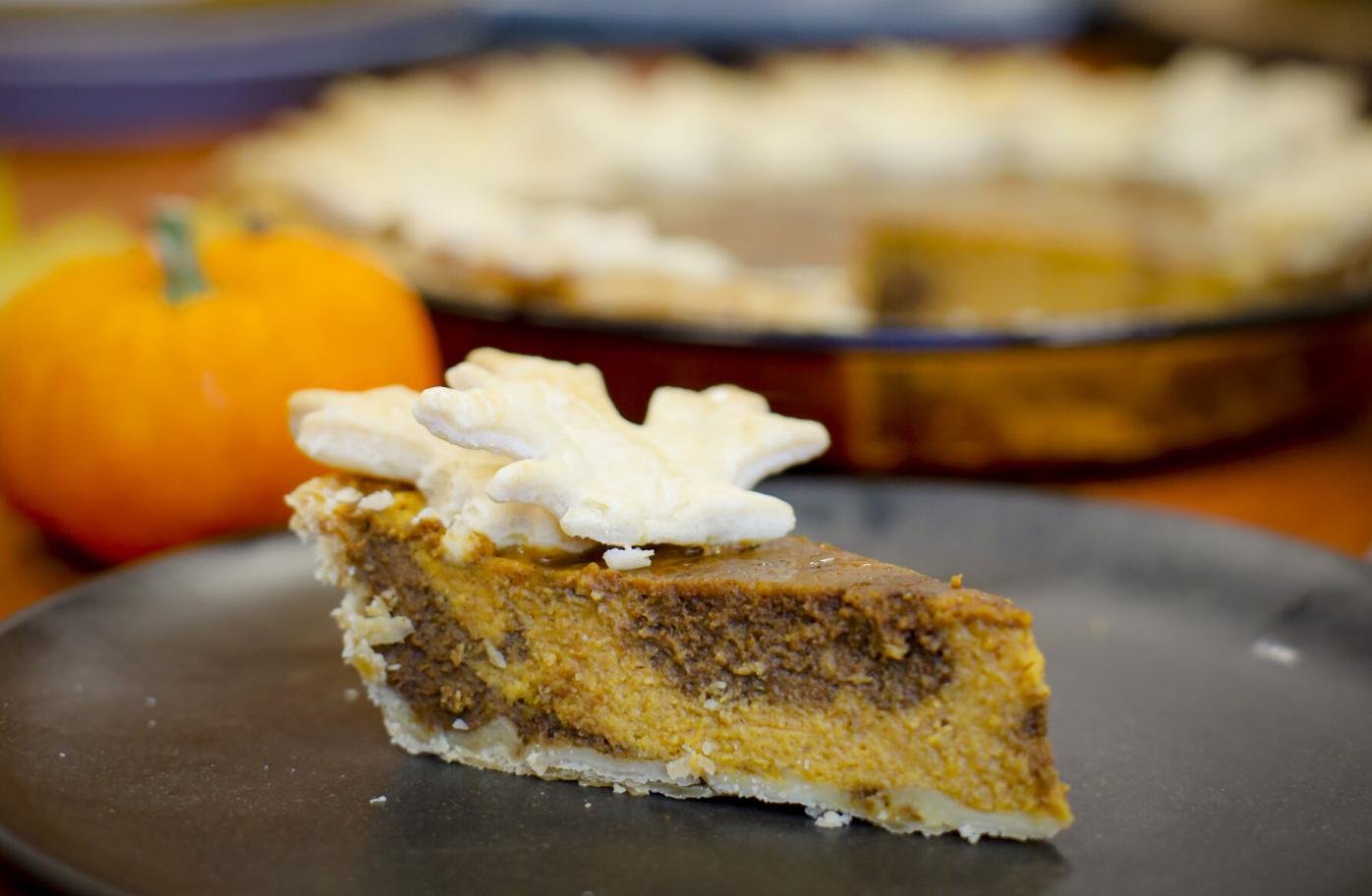 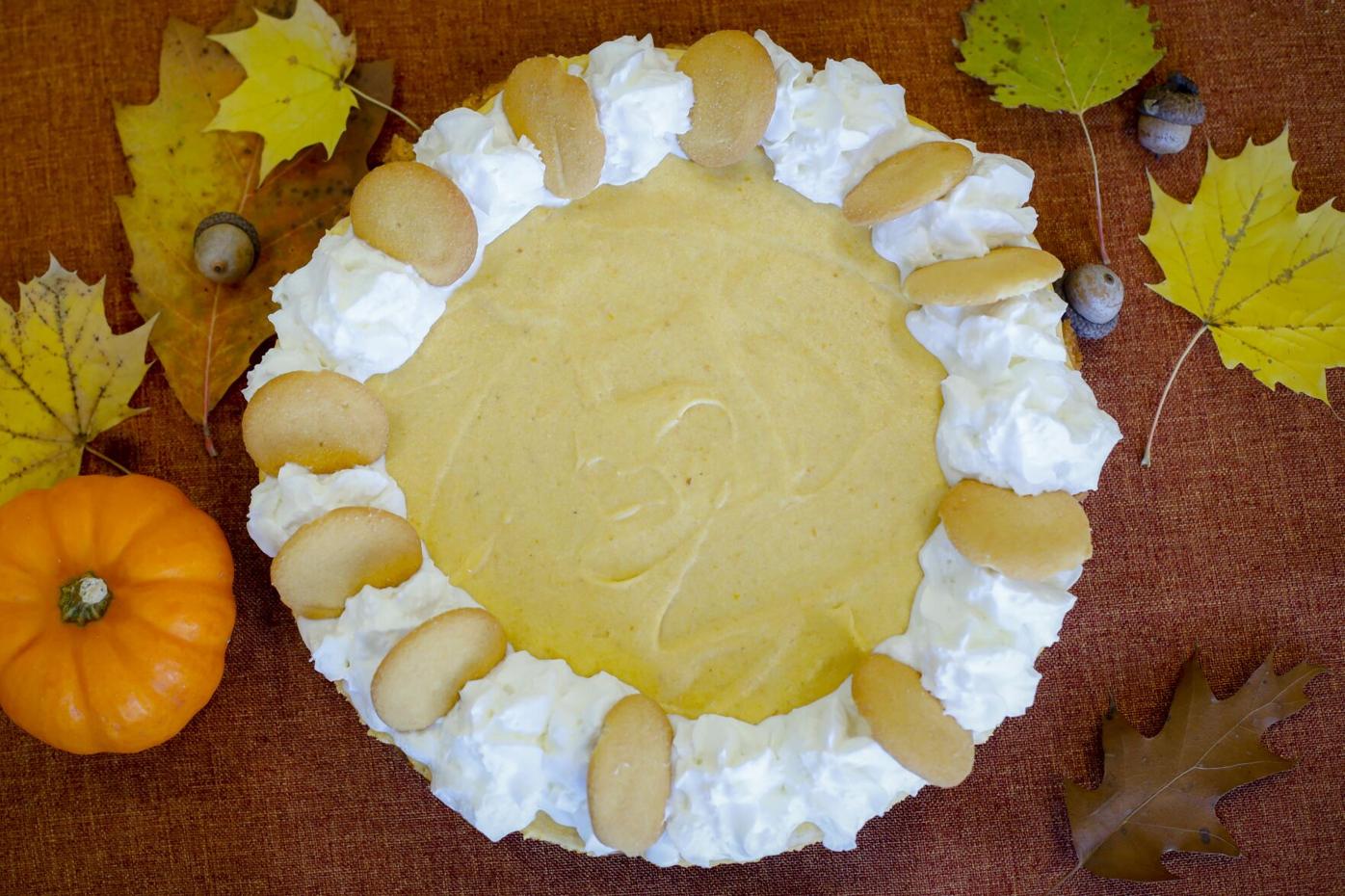 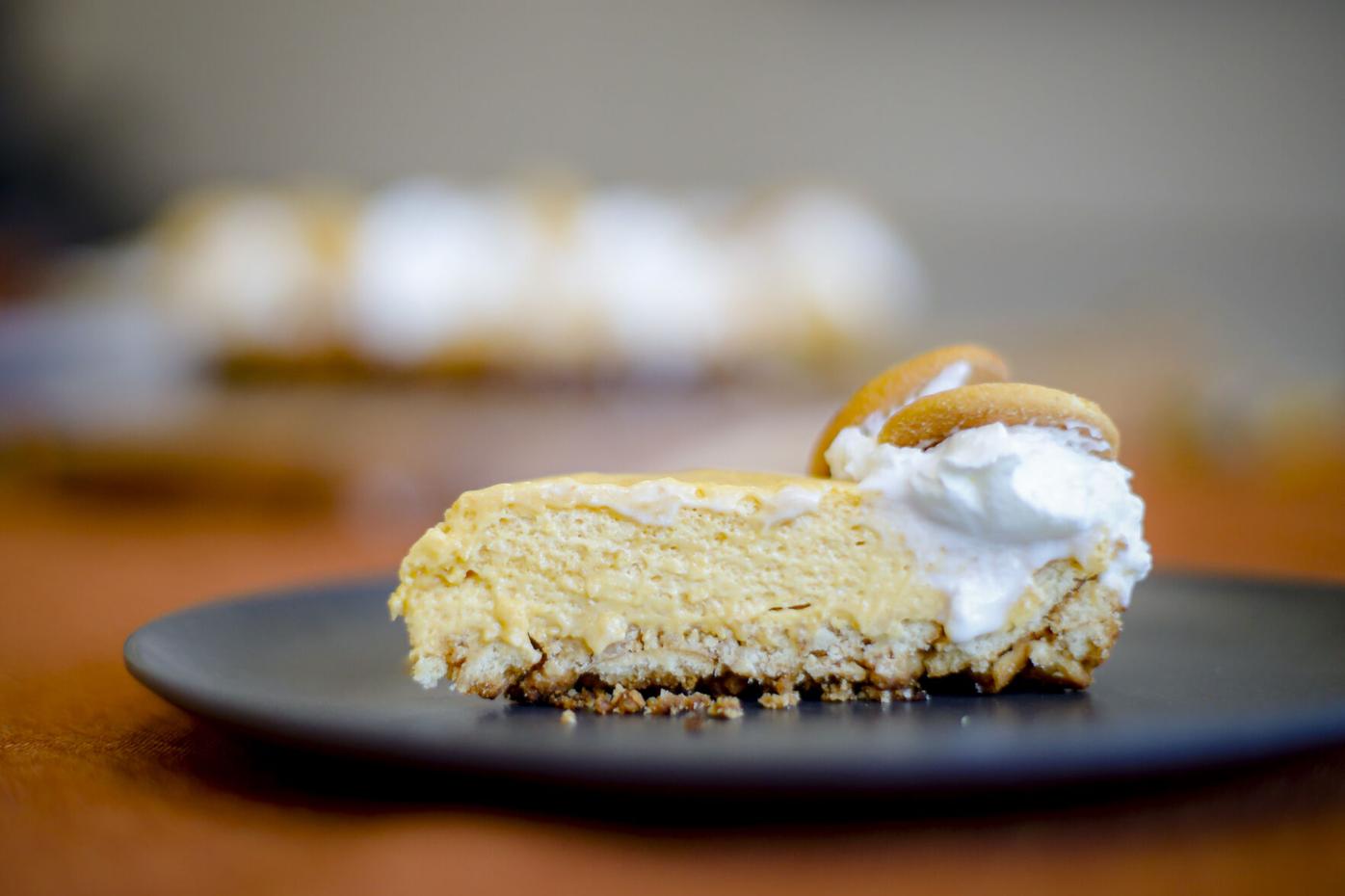 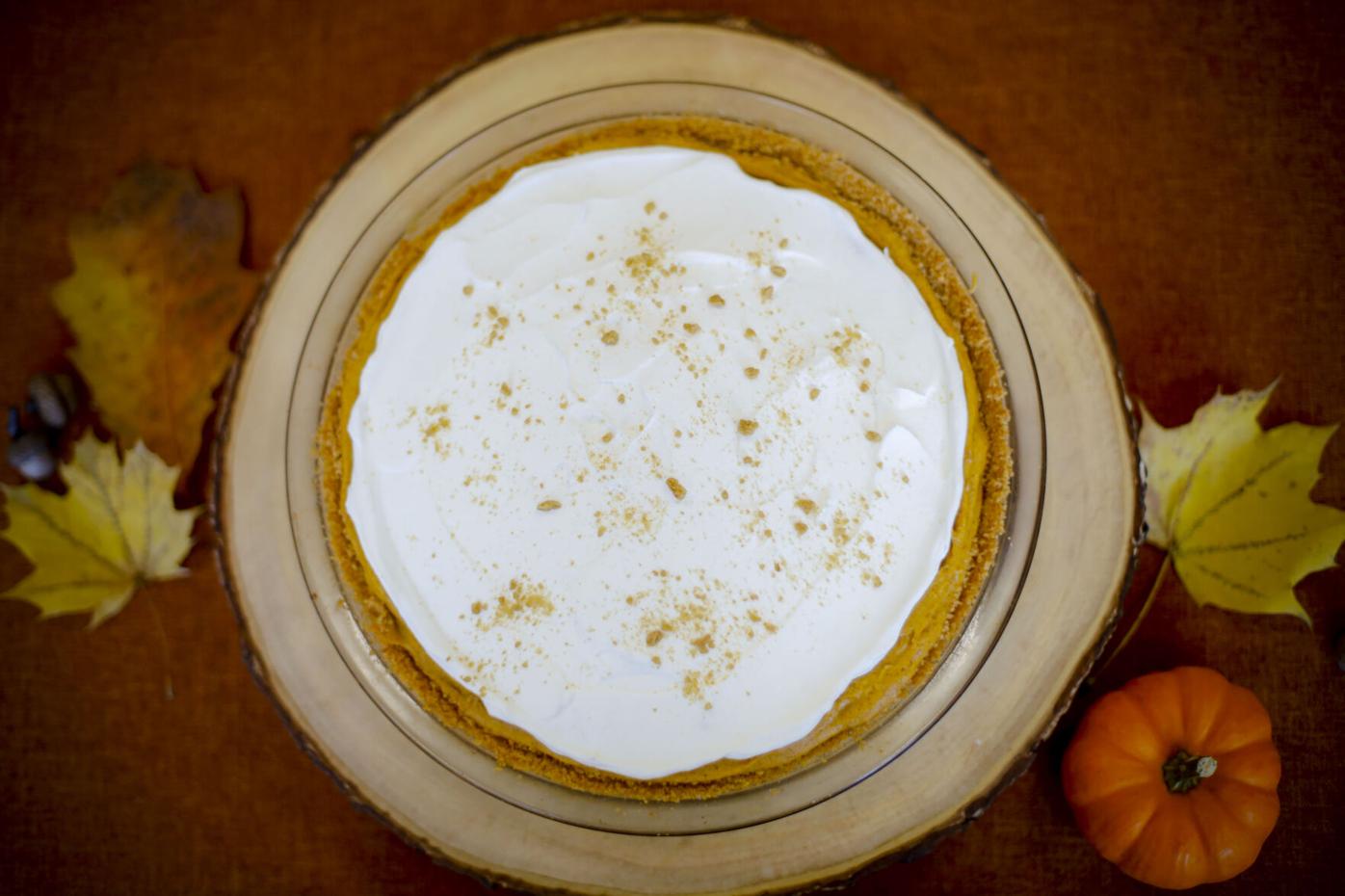 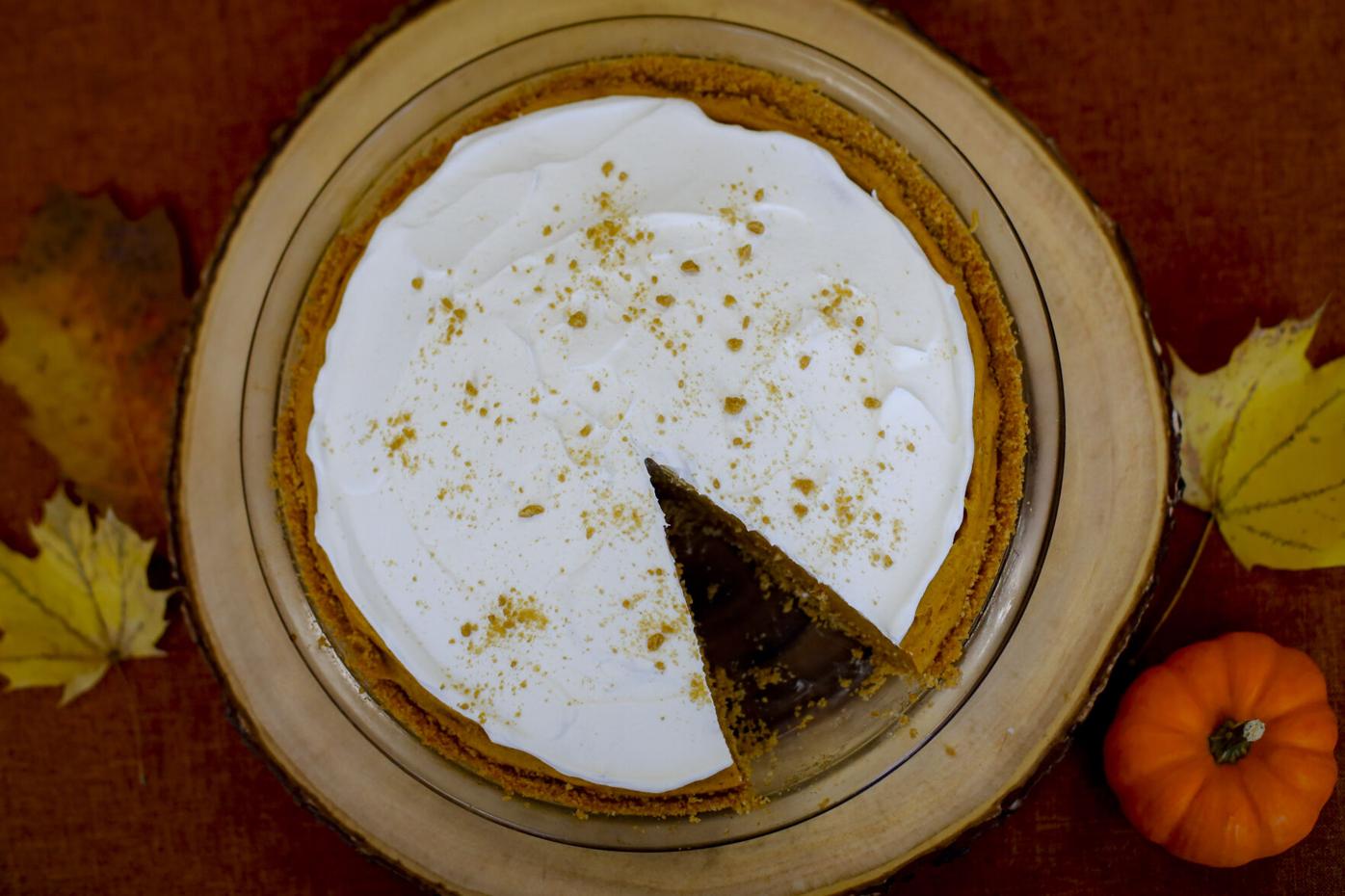 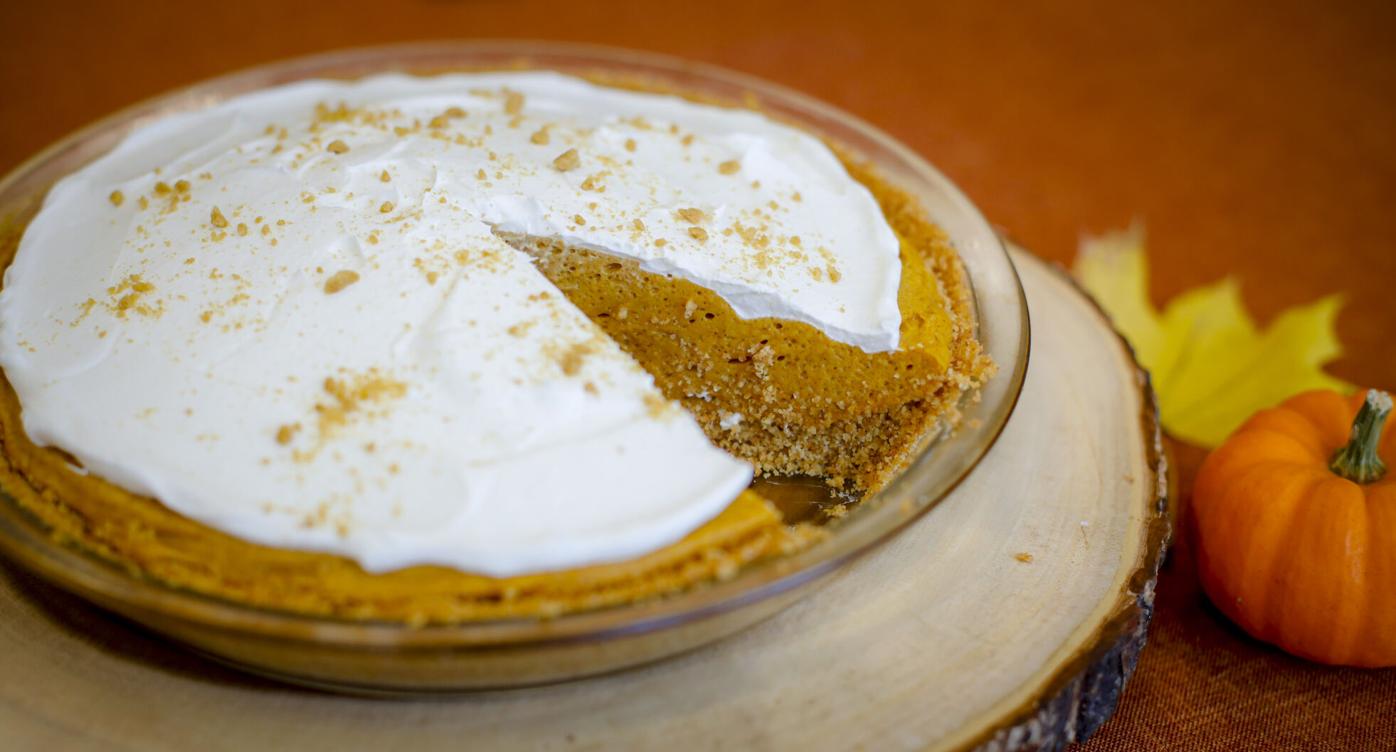 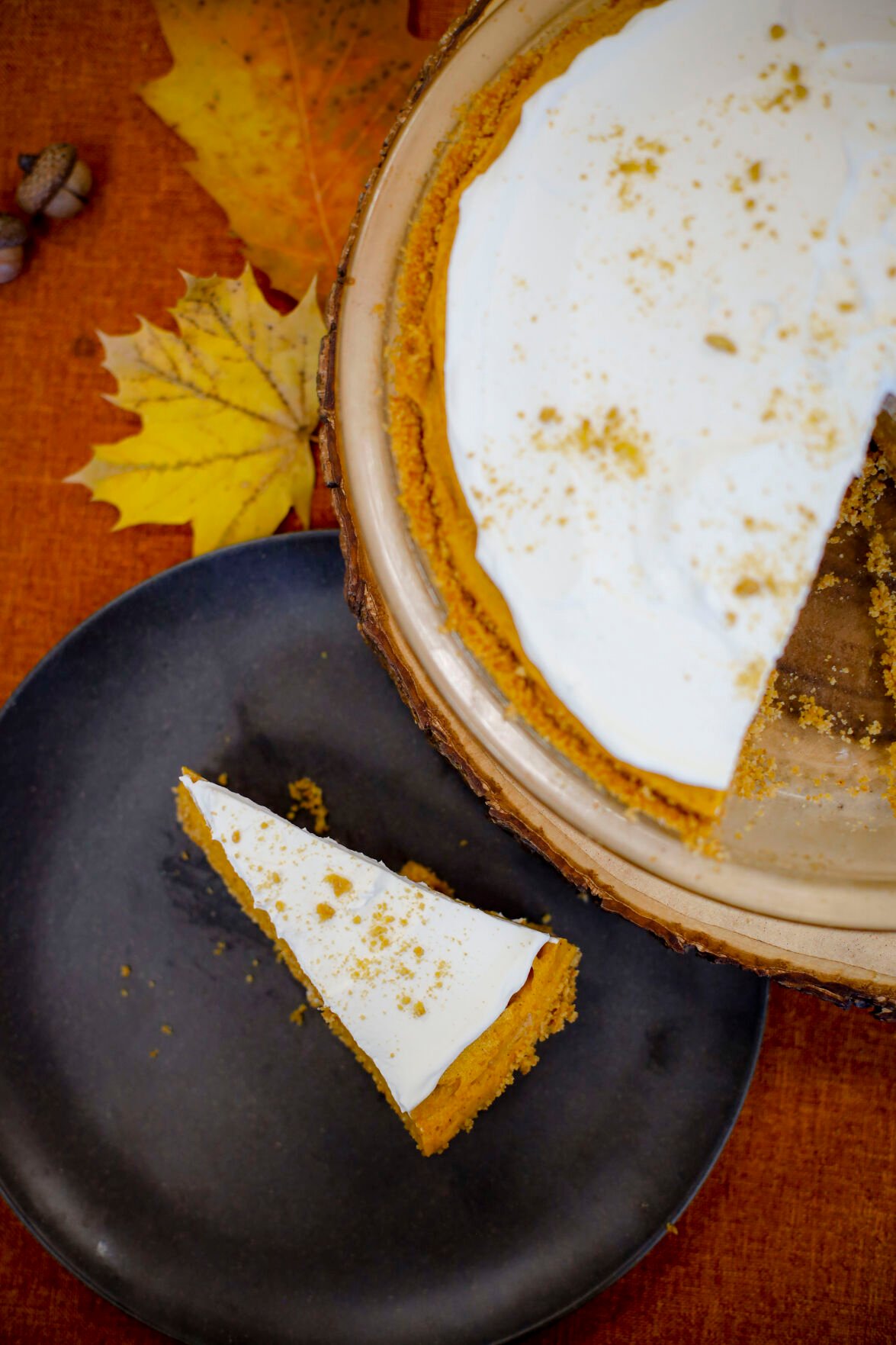 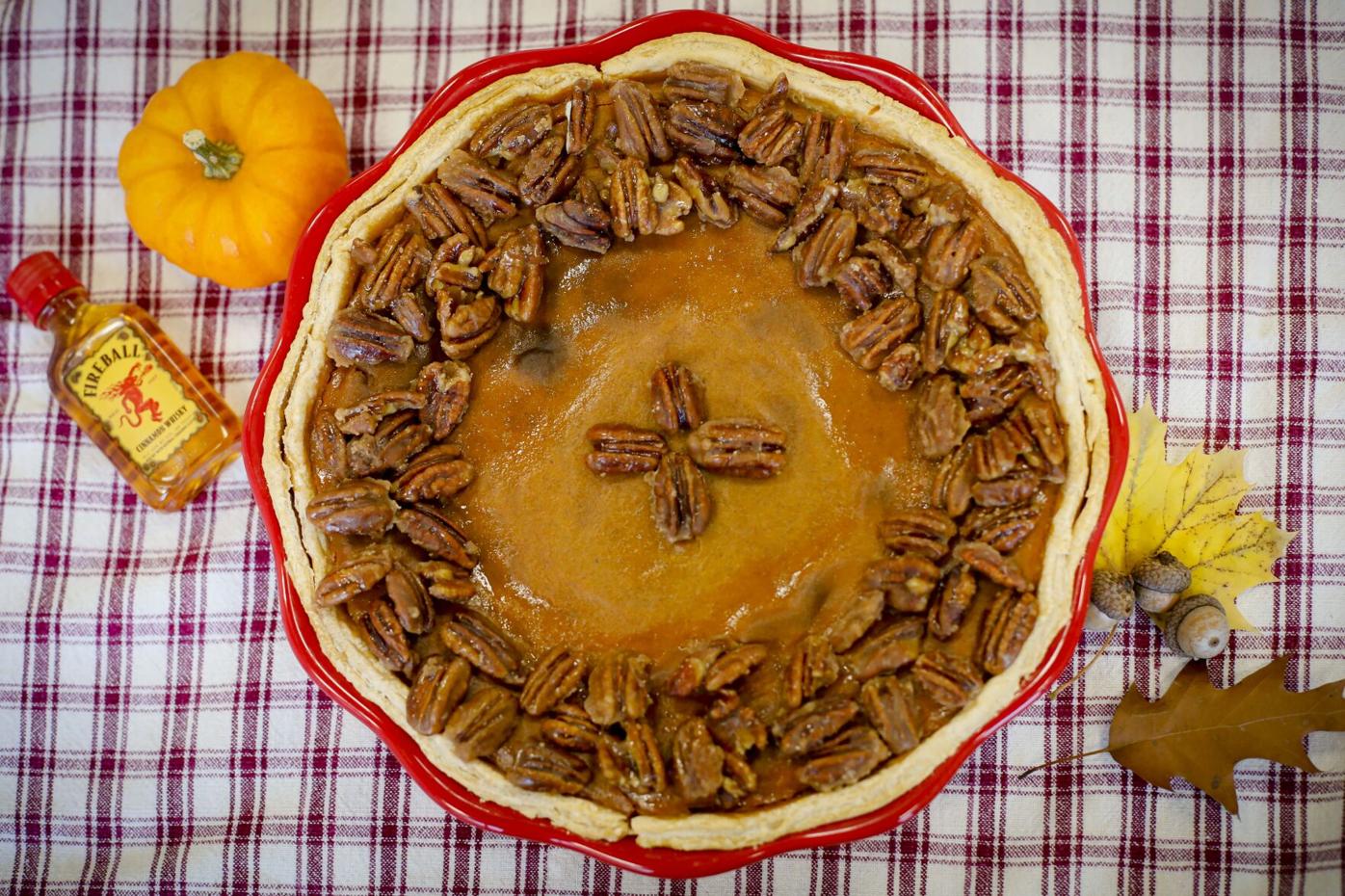 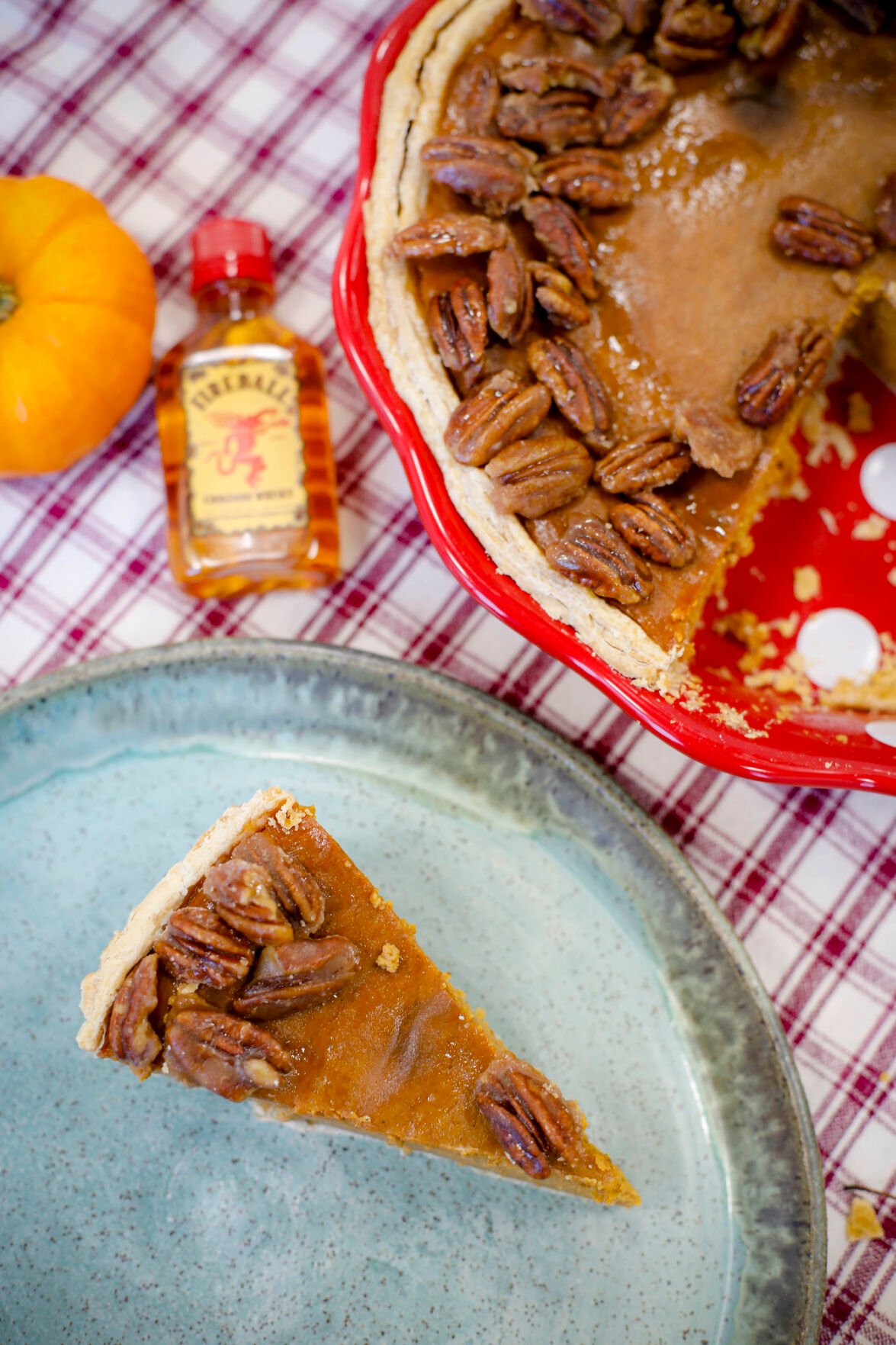 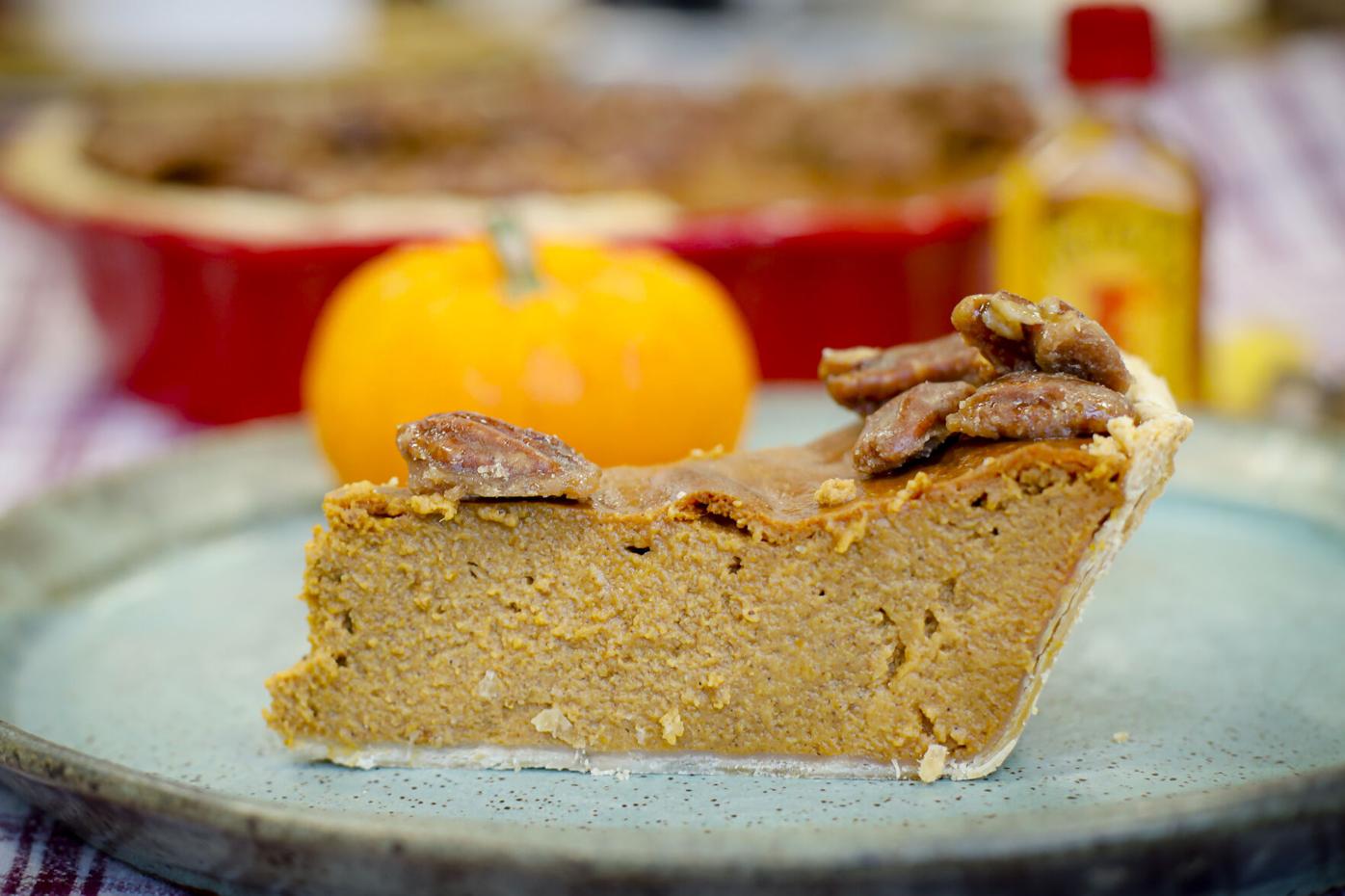 A slice of Fireball Whisky pumpkin pie with candied pecans. 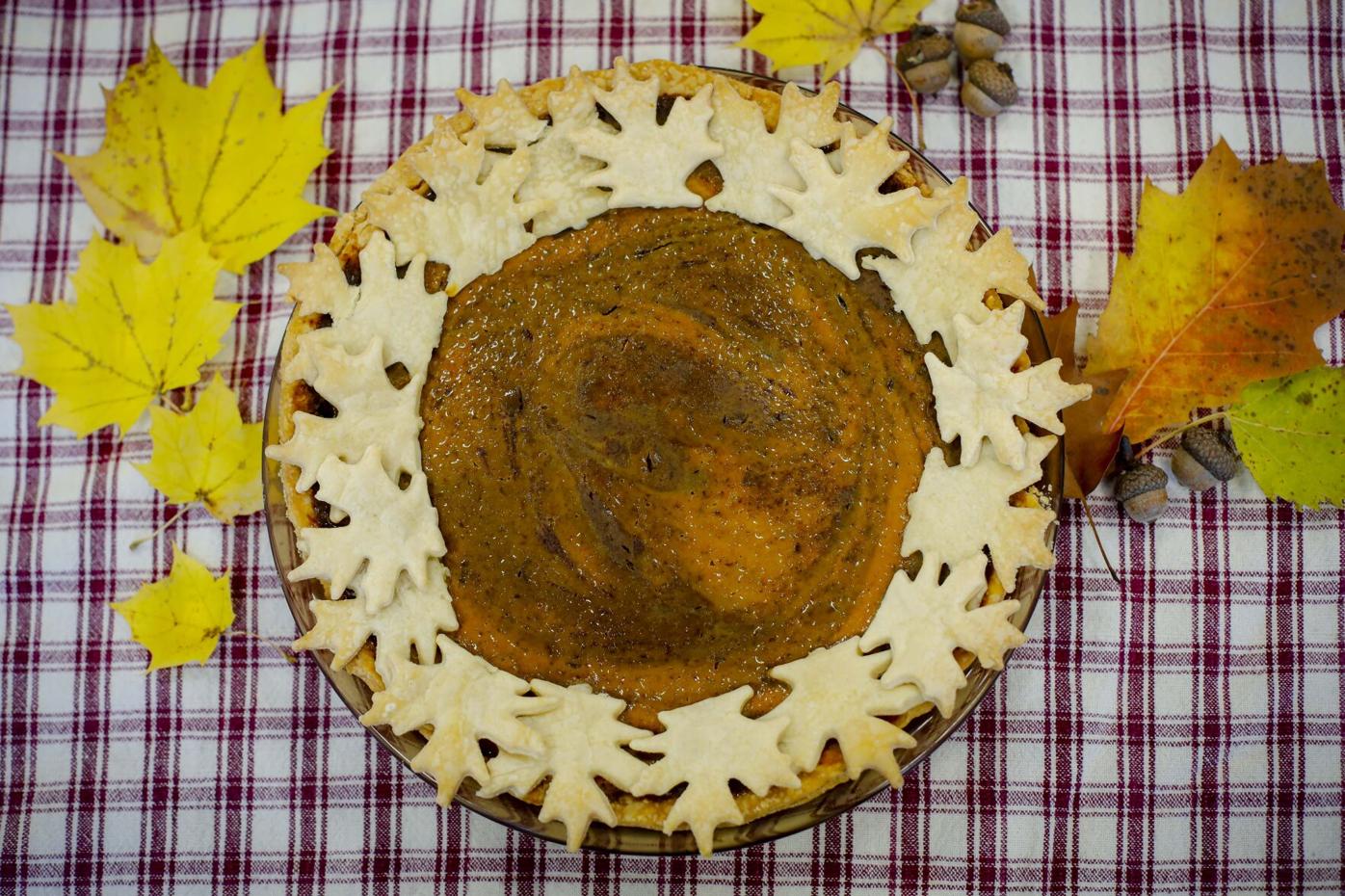 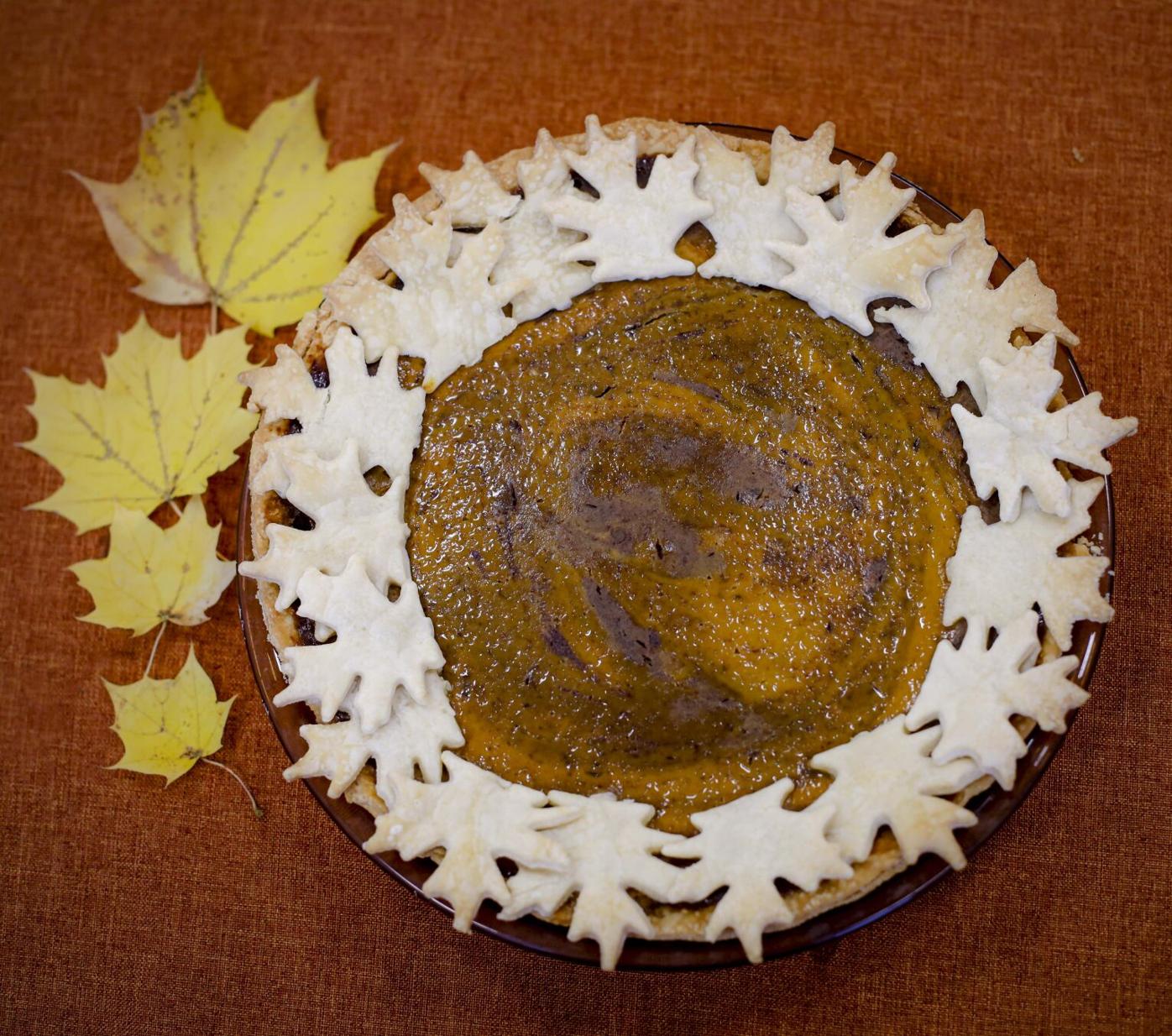 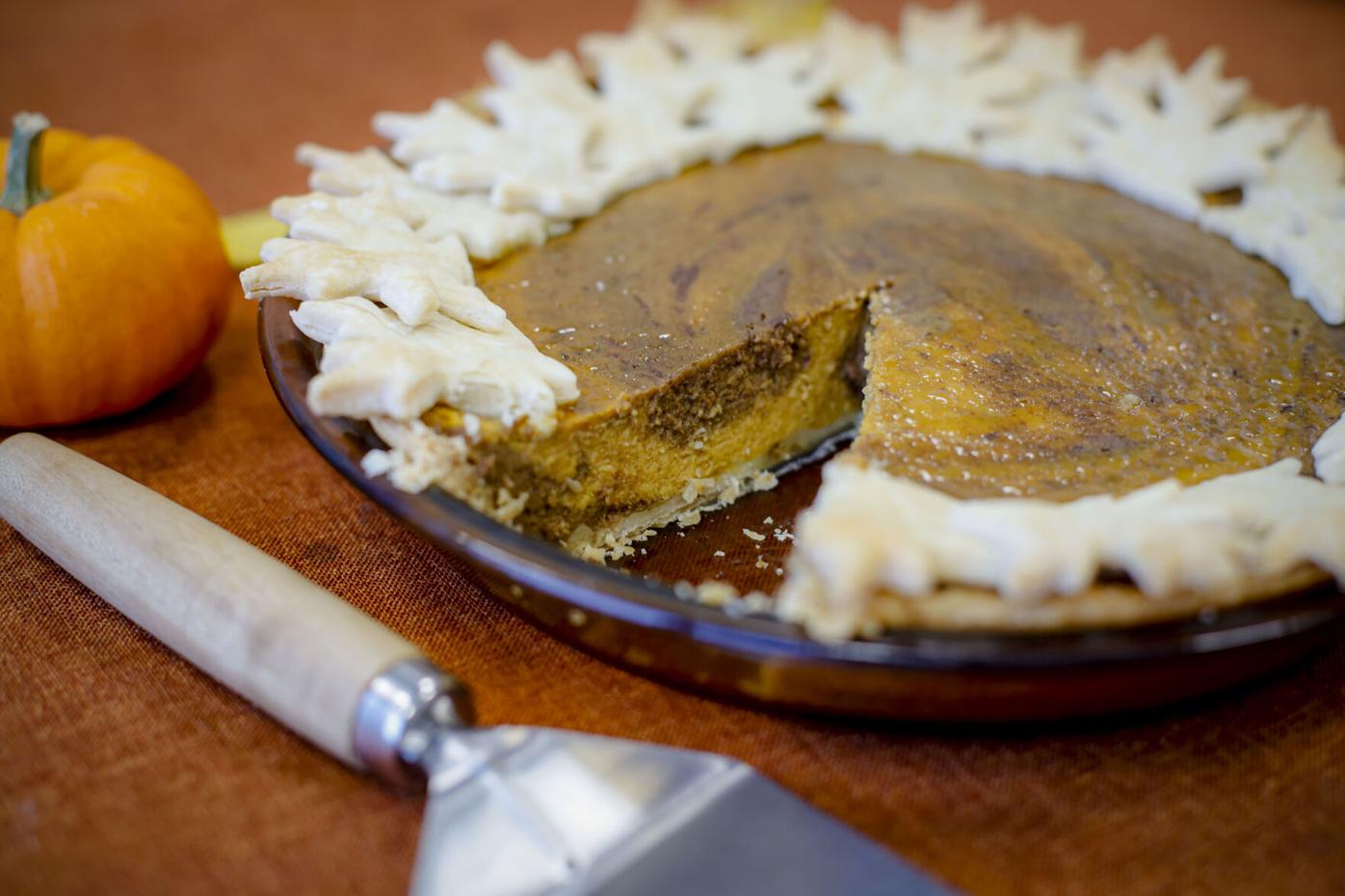 Photos: Not your typical pumpkin pies, just in time for Thanksgiving

Bored with the pumpkin pie you serve after Thanksgiving dinner year after year? You're not alone.

But, you ask, what will you serve instead of pumpkin pie? Apple? Chocolate cream? Pecan? What will your guests think?

Don't worry, we're not suggesting you cut pumpkin pie from the menu. And, we understand that pumpkin pie is synonymous with Thanksgiving, despite it not being served at Plimoth Plantation in 1621 or in Virginia in 1619, where settlers of Berkeley Plantation celebrated a day of Thanksgiving in prayer.

Why make one pie when you can make two galettes? Impress your family and friends on Thanksgiving with one of these sweet or savory tarts, using either your favorite pie or flaky puff pastry crust, or …

We're suggesting that you serve something better than the traditional pumpkin pie that most Americans bake this time of year. And, to help you do this, we're suggesting a few recipes to try. Of course, we tried them out first and fed them The Eagle's news, circulation and advertising staff members, who managed to eat all of these pies in record time.

This is a super easy pumpkin pie that gets a subtle kick from cinnamon-flavored whiskey. The whisky doesn't overpower the traditional pie at all — instead, it adds a sweet, cinnamon flavor to the filling and candied nuts. It would pair nicely with coffee or tea, whisky shot optional.

One 15-ounce can pumpkin

One 14-ounce can sweetened condensed milk

Bring whisky and honey to a boil. Add pecans and stir to coat. Let simmer for about 5 minutes and then remove from heat and drain liquid.

Transfer pecans to the baking sheet, sprinkle with salt, and roast for about 10 minutes, turning pecans over once halfway through baking time. Let cool to room temperature prior to garnishing pumpkin pie.

This pumpkin pie is an easy, sweeter take on the traditional dessert. There's very little to no baking involved in this one (only when you have to make the cookie crust) and the filling sets light and creamy instead of the dense texture you normally get from baking. Beware: The cookie crust can burn easily (ask me how I know ...) so just be sure to watch out for that especially if you have a darker springform pan.

In a medium bowl, stir together crushed vanilla wafers and melted butter until thoroughly combined. Press the crumbs into the bottom and about 1 inch up the sides of the prepared springform pan.

In a large nonstick pan over low heat, stir together the mini marshmallows, pumpkin puree and pumpkin pie spice.

Melt marshmallows while stirring constantly until the mixture is smooth. Remove from heat and cool to room temperature.

Stir in vanilla extract and fold in whipped topping until no streaks remain.

Spoon pumpkin marshmallow mixture into the cooled vanilla wafer crust and spread evenly. Chill for at least 3 hours, or overnight.

Before serving, top with additional whipped topping and vanilla wafers.

Every year, no matter what, my family has to have an array of pies that number more than people at the table. There is no arguing that Thanksgiving doesn't need a pumpkin, apple, chocolate-pecan, chocolate cream (and this year coconut cream) pie. Suggestions that the pies be split between holidays have fallen on deaf ears. Pumpkin pie being objectively the worst of the lot — it's heavy, boring, and likely to be squished, gouged or forgotten in the fridge — this is the pie I would vote off the table if I had my way. Since I don't, I may as well try to make it palatable.

This spiced chocolate pumpkin pie takes no more time than the traditional pie, with only a single added step — mix pumpkin with chocolate. It turns out pumpkin pie is great — if it's actually a chocolate pie.

One 15-ounce can pumpkin

Preheat oven to 425 F. Prepare crust in pie dish, poke the bottom with fork and blind bake for 10 to 12 minutes. If you don't have blind baking beans, whatever dry pasta or beans you have on hand can be used to weight your crust.

Remove pie crust from oven and set aside. Reduce temperature to 350 F and wait for oven to cool off.

Microwave chocolate and butter in 30 second increments, stirring between until melted. Set aside.

In a large bowl combine the brown sugar, pumpkin pie spice, salt, chili powder and cayenne. Stir in the pumpkin and eggs until combined. Gradually stir in half-and-half until combined.

While I love a traditional pumpkin pie, I often find it too heavy too eat after our Thanksgiving feast, even if it is an hour or two later. In search of a lighter version, I tried this recipe, found in a review copy of "The Complete Autumn and Winter Cookbook" sent to me by America's Test Kitchen. What really made me want to try it was that fact that, instead of using a cooked egg custard, this recipe uses meringue. And, most of this recipe is made using a food processor, which makes it super easy to make.

One 15-ounce can unsweetened pumpkin puree

Note: The original recipe calls for homemade whipped cream. I chose not to make my own.

Adjust oven rack to middle position and heat oven to 325 F. Process graham cracker pieces, sugar, and ginger in food processor until finely ground, about 30 seconds. Add melted butter and pulse until combined, about 8 pulses. Transfer crumbs to 9-inch pie plate. Using bottom of dry measuring cup, press crumbs into bottom and up sides of plate. Bake until crust is fragrant and beginning to brown, 14 to 16 minutes. Let crust cool completely on wire rack, about 30 minutes.

Sprinkle gelatin over rum in large bowl and let sit until gelatin softens, about 5 minutes. Microwave until mixture is bubbling around edges and gelatin dissolves, about 30 seconds. Let cool until slightly warm, about 110 F. (It will be syrupy.)

Meanwhile, microwave pumpkin until heated to 110 F, 30 to 60 seconds. Process pumpkin, brown sugar, cinnamon and salt in food processor until completely smooth, about 1 minute. Scrape down sides of bowl and process until no streaks remain, 10 to 15 seconds. Transfer pumpkin mixture to bowl with gelatin mixture and stir to combine. Stir in cream.

Spoon filling into center of cooled crust. Gently spread filling to edges of crust, leaving mounded dome in center. Refrigerate pie for at least 4 hours or up to 24 hours.