No seashore vacation is complete without days at the beach and plenty of seafood. However, it was a shrimp scampi my friend, Rich, made at the campground that won the seafood honors for the vacation. 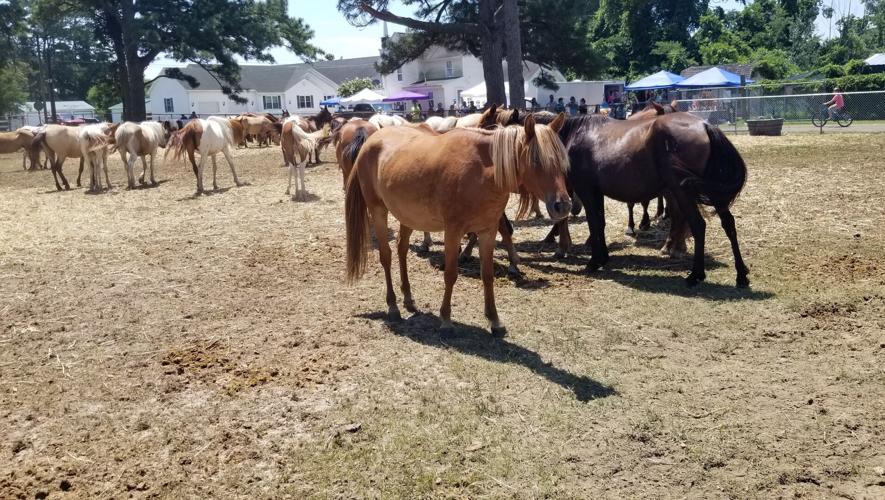 Columnist Margaret Button fulfilled a childhood dream of seeing the wild ponies of Assateague Island during a recent trip to Virginia.

The summer I was 9 or 10, I read the book, “Misty of Chincoteague” by Marguerite Henry. Two orphaned children go to live with their grandparents on the barrier island of Chincoteague in Virginia, where their father was raised. Their father had told them tales about another barrier island, Assateague Island, and the wild ponies that inhabited it — in particular, a rarely seen mare named Phantom. The ponies are sold at auction annually to cull the herd and raise funds for the island’s volunteer fire department. The children devise a plan to earn money and buy Phantom at the auction — and their lives are changed forever.

As a child, I dreamed of Assateague Island and the wild ponies never imagining that someday I would get to see the pony swim myself. (You can see this year’s swim at youtube.com/watch?v=o5fP3U7fVQw ). But two weeks ago today, I found myself standing on the shore, cheering as the horses crossed the channel.

When the heat wave breaks, whip up this 3-ingredient cake to celebrate

Folklore has it the ponies are the descendants of survivors of a pirate shipwreck off the Virginia coast in the 1600s. Most likely, they are the descendants of horses that were brought to barrier islands, like Assateague, in the late 17th century by mainland owners to avoid fencing laws and taxation of livestock.

The horses are split into two main herds, one on the Virginia side and one on the Maryland side of Assateague, separated by a fence at the state line. The National Park Service manages the Maryland herd; the Chincoteague Volunteer Fire Company owns and manages the Virginia herd, which is allowed to graze on Chincoteague National Wildlife Refuge, through a special use permit issued by the U.S. Fish and Wildlife Service. The permit restricts the size of the herd to approximately 150 adult animals in order to protect the other natural resources of the wildlife refuge.

The auction of the ponies this year, the first time since the pandemic began and the 97th in total, raised $450,200 from the auction of 63 ponies, including a few foals that are designated as 'buybacks.' A buyback pony is donated back to the fire company and returned to Assateague Island to replenish the herd. The fire department owns the Virginia herd and sees to the ponies’ well-being, including two vet checks a year and bringing food to them in the event of a blizzard.

I was fortunate to have a front-row seat the day after the auction as the Saltwater Cowboys herded the ponies back to the channel for their return swim. And while they are magnificent all the time, including in a corral on Chincoteague, they are truly majestic in the wild on their home turf of Assateague Island.

No seashore vacation is complete without days at the beach and plenty of seafood. I had my fill of sea scallops, sampled some outstanding lobster and tried clams — again and with the same result. I’m not a fan. I even tried my hand at going crabbing.

However, it was a shrimp scampi my friend, Rich, made at the campground (yes, I was camping!) that won the seafood honors for the vacation. The recipe below is pretty non-specific in the amount of the ingredients — it’s pretty much to taste — and can easily be doubled.

Peel onion, slice in half vertically, then in vertical julienne-like slices. Over high heat, sauté onion in olive oil in an extra large pan until nicely caramelized and rich brown in color. Add a minimum of three sticks of butter and large can of mushrooms and sauté for about 15 to 20 minutes over medium heat. Add more garlic, if desired, and salt to taste. Add black pepper if desired. Once the mushrooms and onions seem to have absorbed all the seasonings, turn heat down to simmer. Add another stick of butter, if desired or if serving over rice or pasta. Lay in all the shrimp, pushing them into the mixture and let simmer for 5 to 6 minutes, turn the shrimp and continue simmer until the shrimp is cooked through.

Pizza with the taste of New England clam chowder