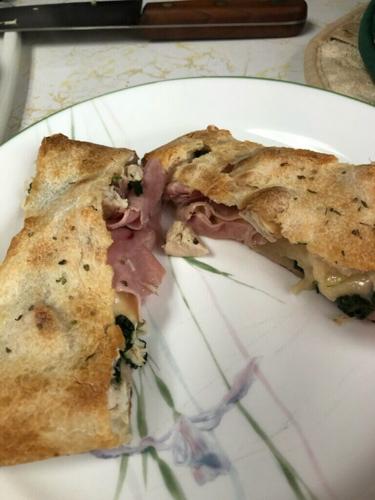 Like pizza, the combination of meats, veggies and cheeses that can be used in a stromboli are endless.

The girls and I got together last Tuesday for the “most dramatic finale in 'Bachelor' nation history” (to quote current host Jesse Palmer — and to be honest, every host about every finale since the show began). Was it the most dramatic? Personally, I don’t think so; the ending was pretty predictable. But I digress …

We got together early for a small potluck dinner. I made a batch of macaroni and cheese, Paulette brought snacks and Sue brought a stromboli made from a recipe she had run across and tried a few days earlier, which got raves from her husband.

Toss ravioli in the air fryer for a toasted, crispy treat

I love recipes that using the basic technique, you can swap out the ingredients to make another variety, creating a new dish. I have several of those recipes — for cake, quiche, muffins, a breakfast casserole and jumbo cookies. This stromboli recipe just joined their ranks.

Sue made one for her husband the night of our get-together that had sausage, pepperoni, mozzarella cheese and marinara sauce — another success. Like pizza, the combination of meats, veggies and cheeses used in the stromboli are endless.

"This kid-friendly recipe uses refrigerated pizza dough, jarred sauce and rotisserie chicken, so you'll have dinner on the table in a flash!" recipe creator "Hyacinth" Cyndi Kane, author of the “Save-It-Forward Suppers” cookbook, said on people.com, where the recipe can be found.

STROMBOLI ALFREDO WITH CHICKEN AND HAM

Spread Alfredo sauce onto dough, leaving a 1-inch border on all edges. Add a few grinds of black pepper. Top with an even layer of chopped chicken, followed by a layer of spinach and a layer of ham; top with cheese.

Starting on a long side, roll dough up jellyroll-style and place seam-side down on baking sheet. Press ends to seal roll; tuck ends under roll. Spray roll lightly with cooking spray; lightly sprinkle with Italian seasoning.

Bake stromboli in preheated oven until golden brown, 15 to 20 minutes. Lift roll, and make sure it is browned on the bottom before removing it from oven. Let stromboli rest 5 to 10 minutes before slicing. Cut into 1 1/2-inch slices and serve with additional Alfredo sauce.

Many of the recipes I now turn to are the ones that can be easily made — and easily frozen. Two of my recent favs are a two-ingredient pumpkin cake that I found in my recipe box and a four-ingredient coconut macaroon that came from my daughter-in-law’s mother.