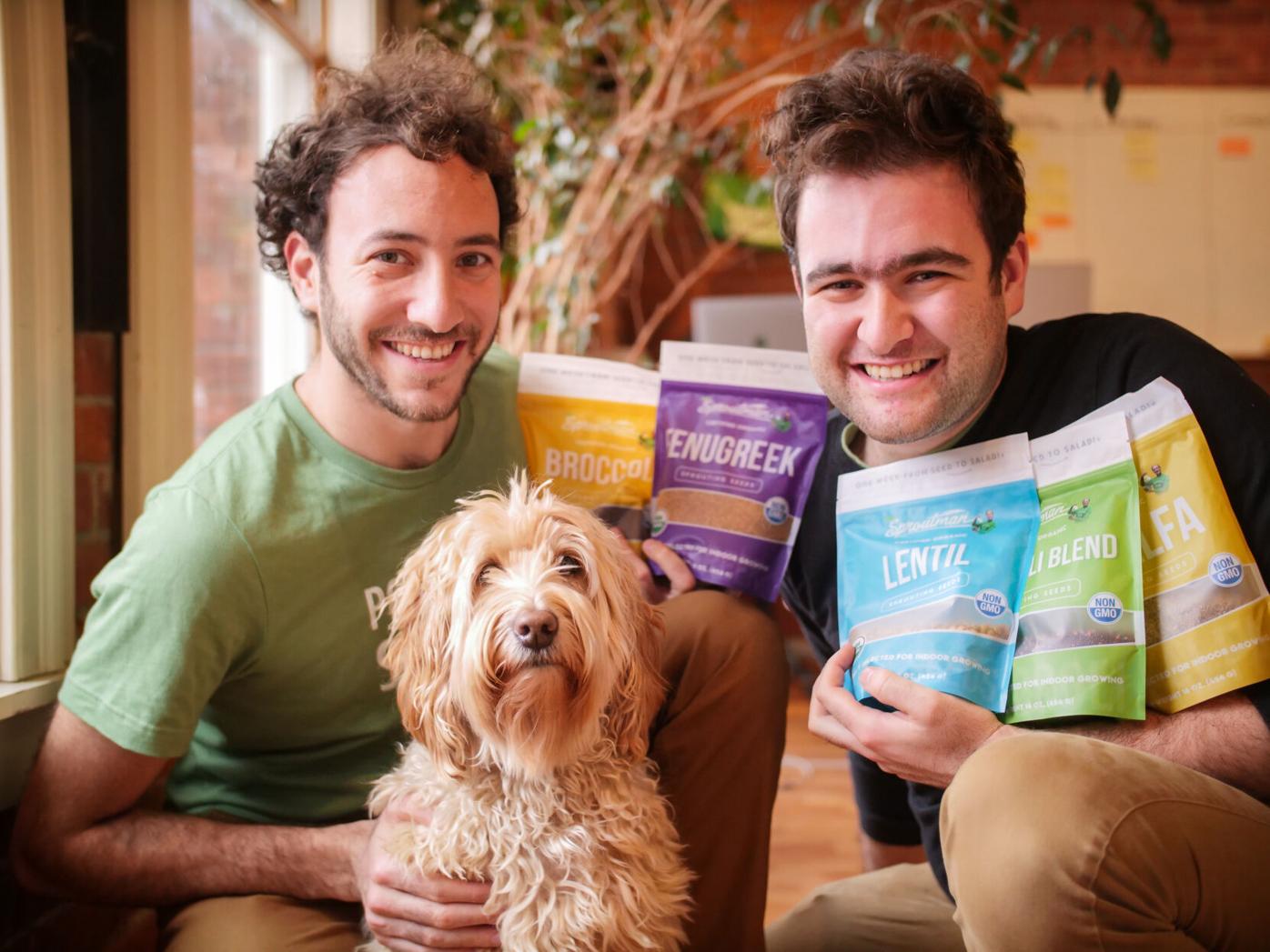 The Sprout Brothers, Ari and Noah Meyerowitz have seen an increase in interest and sales with their online DIY seed sprouting business, Sproutman. The brothers took over the family business, their father Steven Meyerowitz's lifework, in 2015. 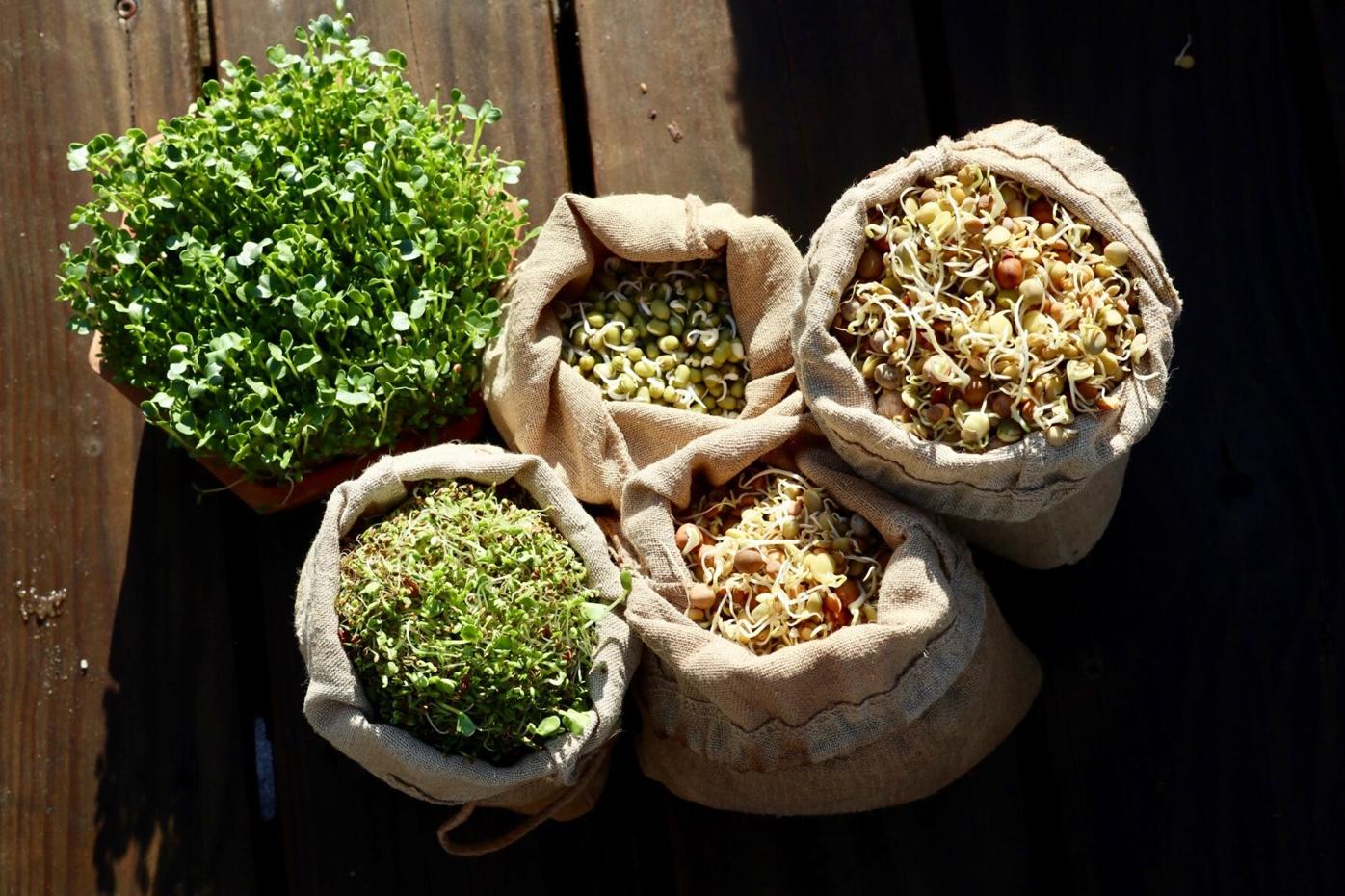 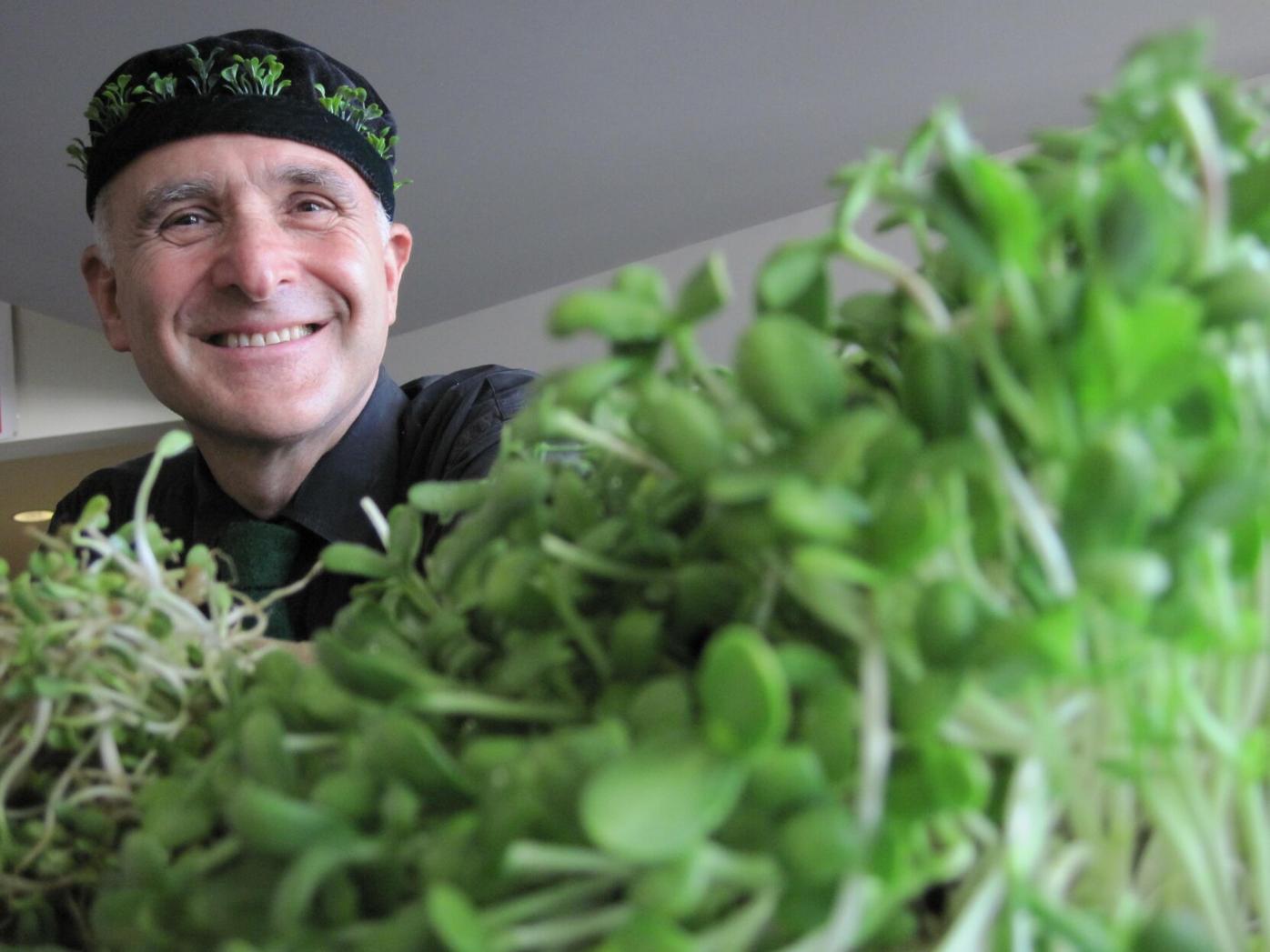 "He wanted organic food in the 1970s in New York. Farmers markets, Whole Foods and Trader Joe's wasn't a thing back then. So he started growing his own food and wrote a pamphlet about it and a gave a class about it. Then he wrote another pamphlet and that turned into a book ..." said Ari Meyerowitz about his father, Steve "Sproutman" Meyerowitz. 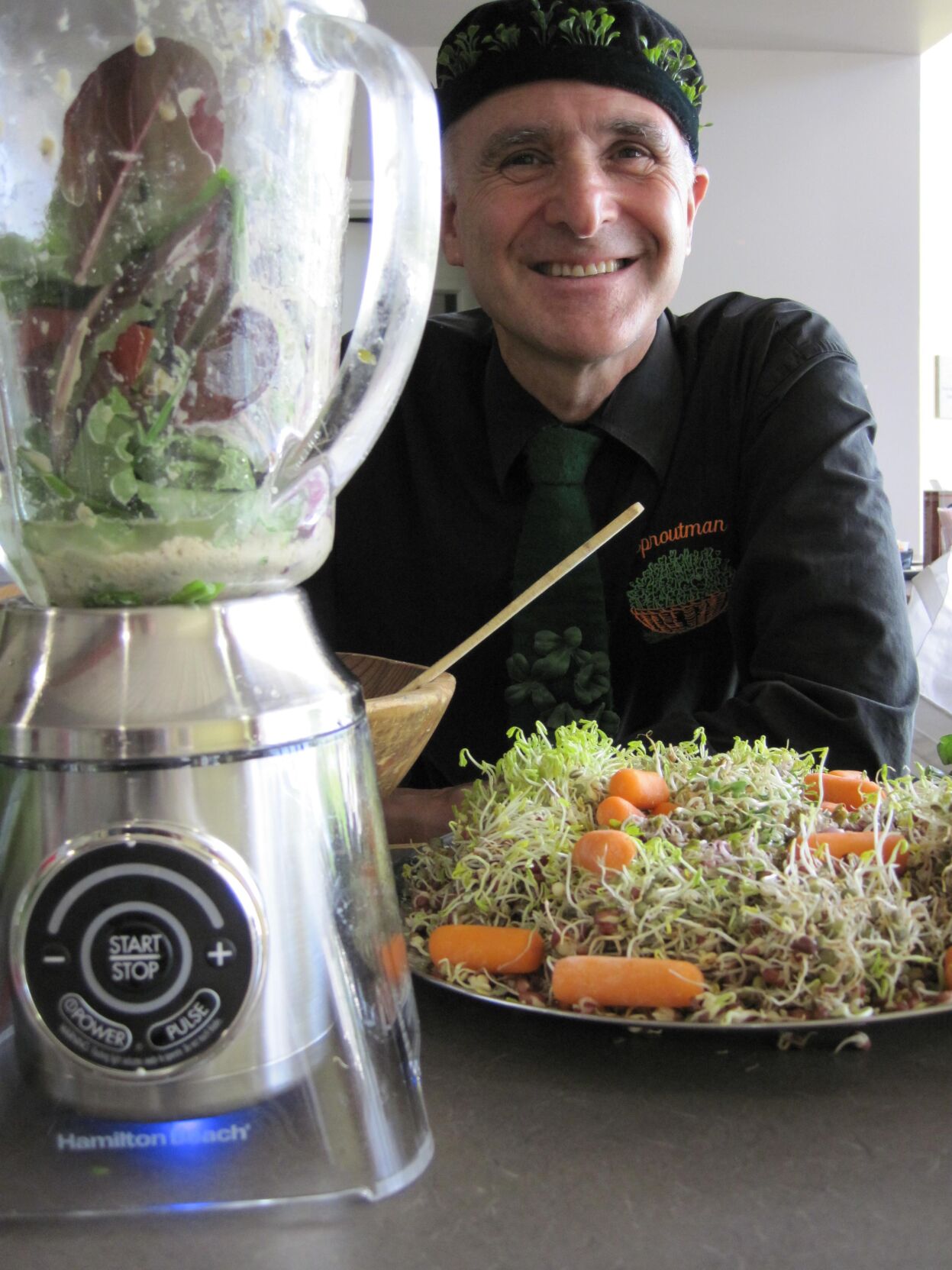 Steve Meyerowitz, founder of Sproutman, was an early advocate of vegan and vegetarian lifestyles; sustainable and organic foods; raw food diets and juicing.

The Sprout Brothers, Ari and Noah Meyerowitz have seen an increase in interest and sales with their online DIY seed sprouting business, Sproutman. The brothers took over the family business, their father Steven Meyerowitz's lifework, in 2015.

"He wanted organic food in the 1970s in New York. Farmers markets, Whole Foods and Trader Joe's wasn't a thing back then. So he started growing his own food and wrote a pamphlet about it and a gave a class about it. Then he wrote another pamphlet and that turned into a book ..." said Ari Meyerowitz about his father, Steve "Sproutman" Meyerowitz.

Steve Meyerowitz, founder of Sproutman, was an early advocate of vegan and vegetarian lifestyles; sustainable and organic foods; raw food diets and juicing.

GREAT BARRINGTON — Ari and Noah Meyerowitz, like other small business owners, braced themselves for "the worst" in March 2020 as the state enacted emergency stay-at-home orders in response to the fast-spreading novel coronavirus. But "the worst" never came.

Instead, in the weeks and months that followed, Sproutman, the internet-based seed sprouting company they run from a second-floor office in Great Barrington, began to see increased sales driven by people seeking out healthy food options and plant-based sources of protein.

"I had a conversation with a customer a week ago, who said, 'COVID-19 cases have been really high where we are [in the Midwest] and we really don't leave the house. People ask us how we get our vegetables. We've just been growing our own sprouts. We discovered your company last March and we've been growing them ever since,'" Ari Meyerowitz said during a recent interview over Zoom.

Another customer told him she planned to grow sprouts during a three-month boat trip she was taking as part of a major life change that included moving to Costa Rica. The customer, he said, was taking 10 pounds of seeds, which when sprouted, is equivalent to 100 pounds of produce.

"People call every day with stories like that," Ari said.  "It's been really cool seeing the new sprouters show up."

"I guess we probably had about three times the amount of orders we normally do. We shipped out about 8,000 orders," said Noah Meyerowitz, who was dressed in a black shirt with the words "Powered by Sprouts." "I love that in this business every order is such a healthful product for people. Thinking about that, that's 8,000 new people growing their own food and enhancing their nutrition. That's really great."

And, to their delight, sprouting seeds became trendy on social media.

"We were joking, last year, that sprouting and baking bread were almost in the same category," Noah said. "In lockdown, people were like, 'What do we do?' So many people began growing their own sprouts during that time and it's just created this snowball effect of [people realizing] this is incredibly easy; it's growing our own food; and a great project."

Noah believes their father would get a kick out of the "sprout awakening" that happened in 2020.

Their father, Steve Meyerowitz, dubbed "Sproutman" by The Vegan Times in a 1979 feature article, spent over four decades touting the health benefits of sprouts and wheatgrass. His fervent belief in the nutritional value and health benefits of sprouts and wheatgrass led him to develop the Freshlife Automatic Sprouter and to write 10 books on the subjects. A pioneer in the field, Steve was an early advocate of vegan and vegetarian lifestyles; sustainable and organic foods; raw food diets and juicing; promoting his products and beliefs at tradeshows and on television.

Ari and Noah took over the company in 2015, following Steve's death from injuries sustained in a two-car accident. Dubbing themselves the "Sprout Brothers," Ari, then 25, returned home from Germany to work with Noah, then 15 and still in high school, to ensure their father's lifework continued.

"After his death, followed this immense outpouring from all of the people who he had reached through his work and lectures," Noah said. "Aside from everything else, that's what inspired us to take over and continue this legacy because we realized just how powerful and impactful it had been. Neither of us had really been involved in the business, but his business had been in a state of transformation at that time anyway."

His business, Ari said, was primarily teaching and educating. "He wanted organic food in the 1970s in New York. Farmers markets, Whole Foods and Trader Joe's wasn't a thing back then. So he started growing his own food and wrote a pamphlet about it and a gave a class about it. Then he wrote another pamphlet and that turned into a book and then another book. His lectures and books were the revenue generators."

"He just wanted to write another book; he wanted to teach. That was his passion," Ari said. "The website was always just a place to bring people to find the things they needed. Other than that, he outsourced as much as he could. Every time something grew into a thing where someone else wasn't providing the service, he would get frustrated that he'd have to invent it."

Steve created Sproutman Publishing, to publish his own books, which was the most lucrative part of the business. But then, in the mid-2000s, Amazon changed its book-selling policies, a move that took its toll on the book industry, hitting small booksellers and distributors the hardest.

"His book business is what paid the mortgage, paid the bills and what fed us. I remember in 2013, I was on the phone with him, and he said, 'It's like my revenue is slashed in half every year,'" Ari said. "When we took over, we saw the good that this could do, but the business wasn't working. When we took over, the business was in the midst of this huge upheaval, as was our lives. We had to be innovative. We took over this legacy business, with a name and a following, but the revenue wasn't there. We had to create it."

Noah added, "It took us a while to find our way, because in addition to finding a way to reinvent this business, we were grieving. But we quickly realized the key was building off this platform we already had, not memorializing."

The first thing they did was develop a shelf-stable wheatgrass supplement.

"It's wheatgrass juice that is turned into a powder and we put it in capsules. We launched this wheatgrass product and that turned things around," Noah said. "That was both empowering and exciting to us. It was the first thing we took from idea to a product. And it was successful."

The success of the wheatgrass supplement pushed the Meyerowitzs to reevaluate the rest of the company's products. Next they overhauled the packaging of their organic sprouting seeds, redesigning its look, while also hiring a marketing team to work on copy and photograph the products for their website.

"We have a mentor in the industry, who said, 'Listen guys, the best thing that you guys have done all year is redo your seed line. And you're online, so no one cares.' But it mattered to us. And it turns out, people do care," Ari said. "The success of sprouting seeds, during 2020, was [the seed line] often being shared on social media; the pushback of people recognizing the brand and the fact that it looked as good as it did."

And there's still more to come.

"We're always looking to make this easier, so we're in the process of creating a new sprouting device. The sprouting process is super simple in its essence; it's just seed and water. But having a growing medium that's elegant and easy to use helps," Noah said. But most growing trays are made from plastic, a material the brothers hope to move away from in favor of more sustainable products. To do that, they're developing a stainless steel growing tray and also are exploring one made from bamboo.

Also in the works is a line of powder blends made from dehydrated, milled spouts, which can be added to foods and smoothies. The line — inspired by the popularity of the wheatgrass supplement — will offer blends to help with nutritional balance, skin and beauty and energy.

And there's also an app in the works. It's based on one of their dad's most popular information tools, the Sproutman's "Turn-the-Dial" Sprout Chart, an information-packed sprouting guide.

"It's going to have everything you need to know about each variety of sprouts; how long to soak them, reminders, nutritional information and recipe ideas. And we might even make it more advanced so that when you get your sprouting kit there's a little bar code you can scan and get a welcome video," Noah said.

The brothers see the app as a natural step in bringing their father's passion to a new generation.

"We want sprouts to be in everyone's diet and we'll come up with the solution to get it there," Ari said.