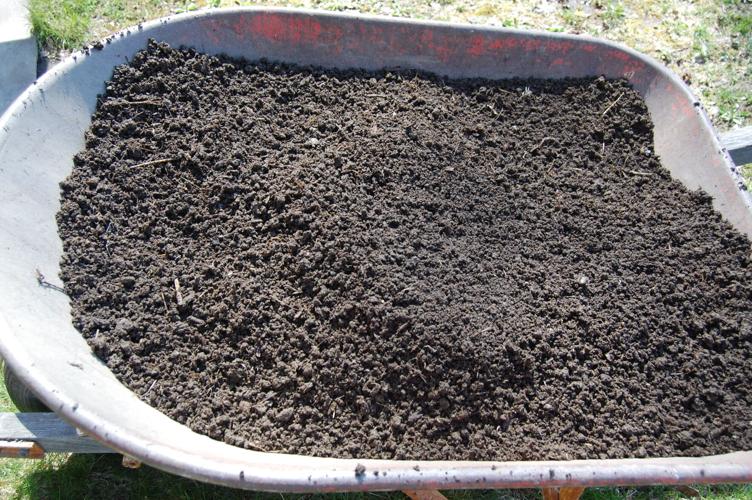 Screened compost is ready to add to garden soils or be used as a component of potting soil. 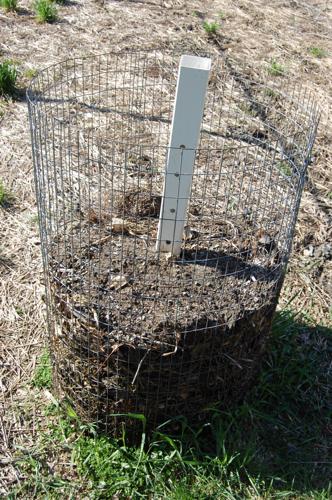 A simple compost bin can be made with a cylinder of sturdy wire fencing. A downspout, with drilled holes, is placed in the center of the bin to allow for more aeration of the decomposing material.

I recall a friend of mine getting upset whenever someone referred to their garden soil as “dirt”. Dirt, he claimed, is what we sweep under the rug. Soil, on the other hand, is the substance in which we grow plants. However, successful growth of plants requires that a soil be healthy, that is, has good texture and structure, is well-drained, nutrient rich, and consists of at least 5 percent organic matter.

The organic matter component is the least stable of factors and must be constantly replenished. In natural systems, such as forests and grasslands, this is accomplished via the cycles of growth and death of vegetation. On the other hand, as gardeners, we routinely pull up or rake up dead plant material. That’s not all bad since some of the plant material harbors pests and diseases. Nevertheless, unless there is a replacement of organic matter in soil, the quality of the soil, and therefore the successful growth of plants, is diminished.

So, how does one replace or sustain organic matter in garden soils? The answer is simple: add compost to the soil. Compost, often referred to as “gardener’s gold” or “black gold”, may be purchased, but is also something we can easily produce at home. To paraphrase an old saying: “compost happens”. It is nothing more than the decomposition of organic matter such as leaves, grass clippings, yard and garden wastes, kitchen scraps (plant materials only), certain animal manures, and even wood chips.

There are many ways for gardeners to make compost. You could spend money on elaborate compost tumblers and bins. However, there are far less expensive ways to create this valuable organic material. I use three different methods. The easiest is to simply pile up organic materials in a heap, perhaps hidden in a back corner of the yard or surrounded by a hedge if one finds a mound of rotting organic matter visually offensive. My pile is elongate, that is, fresh materials are steadily stacked on one end while at the other end is where the finished compost is located. That works well as long as you don’t extend the pile into the neighbor’s backyard. To hasten the rate of decomposition of materials, the pile should be overturned periodically in order to promote aerobic conditions, a necessity for the microbes involved in breaking down the organics. This is referred to as hot composting. Breakdown of organic matter will still occur without the turning process but at a slower rate, referred to as cold composting.

No space for a garden? If you have a patio, doorstep or windowsill, you have plenty of room for a container garden!

Another method is to build a simple bin. Mine is nothing more than a cylinder of metal fencing. The cylinder is about 36 inches in diameter. In the center of some cylinders, I’ll place a section of downspout or other tubular material in which 1/2-inch holes are drilled in order to allow for some aeration. The finished compost of this and the previous method are screened through 1/2-inch mesh hardware cloth to remove any undecomposed material.

The third method is called trench composting. This is done by digging a trench in a section of the vegetable garden. It is about a foot deep and 16 to 18 inches wide. Organic wastes are added to a depth of 6 inches and then covered with a thin layer of grass clippings as a nitrogen source. As the trench fills, the dug soil is returned to cover the organic material.

While composting may seem to be a difficult task, it can be a really easy process and yield a valuable material needed to convert dirt to soil.

Here’s the latest dirt on gardening tasks for this weekend:

Wondering how to help the pollinators after 'No Mow May is over? This lawn care strategy that benefits pollinators and your yard

For those who may be self-conscious about being perceived as being neglectful or lazy due to a lack of lawn maintenance, No Mow does not mean No Mow Forever.

Spongy Moths have hatched in the Berkshires. Here's how to get rid of them and treat yourself if you get a rash from them

Spongy moths, formerly known as gypsy moths, have hatched in the Berkshires and are currently wreaking havoc on gardeners and outdoor enthusiasts. What are these hairy caterpillars and how do we eliminate them?