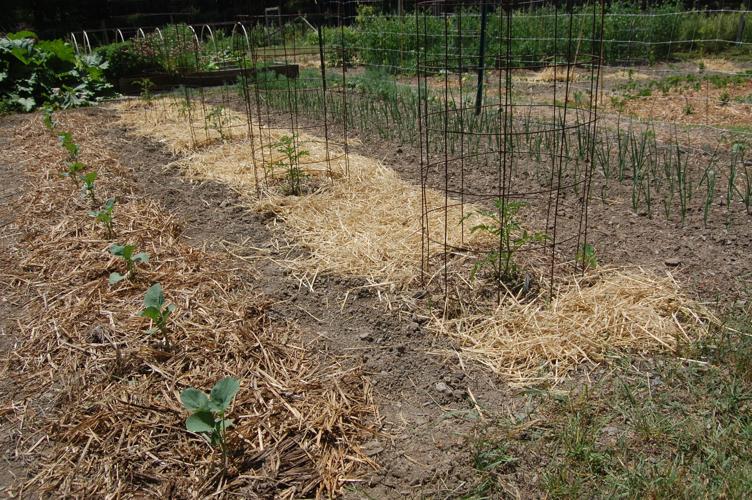 Tomato plants in the garden, caged with straw mulch. 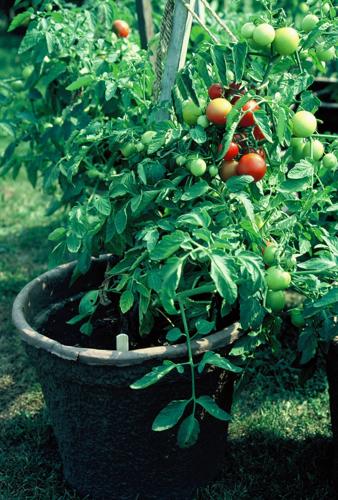 A tomato plant in a potted container. The author says to wait until daily minimum temperatures are consistently in the 50F range before moving plants outdoors.

Memorial Day is of course a very special day to mourn and to honor, as we should, those who gave their lives while serving in the U.S. military during times of war. Memorial Day weekend has also taken on unrelated significance. To many folks, it is perceived as the unofficial start to summer and that means gathering with family and friends for picnics and barbecues, or just lounging in the shade of the old oak tree; hopefully one not infested with spongy moths.

To many gardeners, Memorial Day weekend is considered the time for setting out their tomato plants. Before going any further, I must admit that I do not always follow that practice. I still have vivid memories of planting tomatoes Memorial Day, 2009, only to awaken the next morning to a hard freeze which destroyed all the tomato seedlings I had planted. I’ve been much more careful since then and tend to wait until daily minimum temperatures are consistently in the 50-degree range. After 3 mornings of temperatures in the 40-degree range earlier this week, the forecast now puts the daily minimums above that. So, I will be planting this Memorial Day weekend.

Sprawling: The simplest technique is to let the plant sprawl over the ground. I recall my father successfully growing tomatoes that way, and I did as well for many years. The yields were great. However, after having considerable problems with voles eating the fruit and with some fruit rot of the tomatoes in contact with moist soil, I’ve switched to other techniques.

Staking: This may be the most common method used by farmers and many gardeners. In this case, individual tomato plants are trained to one or two stems that are attached to wooden stakes. As the main stem(s) grow, they are tied with some soft twine to the stake. Any suckers coming off the main stem must constantly be pruned off. This is a space saving method as the staked tomatoes need only be a few feet apart. On the downside, I’ve found that tomatoes grown this way are more prone to blossom end rot.

Cages: There are various types of tomato cages, many of which may be purchased at garden centers or through garden supply catalogs. As a sturdier and much cheaper option, cages can be made from concrete reinforcement wire; that is what my tomato cages are. I cut the wire into 5 foot long sections and form this into a cylinder which is 18 inches in diameter. The bottom horizontal wire is cut off leaving 6 inch long spikes. That allows me to push the base of the cage into the soil. Still, the cages may need extra support from stakes to prevent them from toppling in the face of strong wind gusts. It’s a good idea to thin out each plant a bit by removing some of the suckers, thus allowing for better air movement through the plant and reducing the chance for foliar diseases.

Trellis: The simplest trellis is a set of stakes widely spaced with wire or a rod of some sort attached horizontally at the top of the stakes. My preferred rod is electrical conduit. Twine is then hung from the horizontal rod and attached to the base of each tomato plant which has been pruned to a single stem. As the tomato grows, the stem is either carefully twined to the string or attached to the string using specific clips designed for this use. There are several variations of this technique. Trellising may also be done by attaching the stems to some type of fencing, e.g. cattle fence. In this case, several stems from each plant are attached to the fence trellis.

Container growing: Though most of my tomatoes are planted in the garden, I always save a seedling or two for growing in containers, usually a large flower pot but it could be any type of container, even an old tub. Just be sure it has adequate drainage. The plant is then allowed to sprawl or is caged. The advantage of container growing is that the soil is typically better in texture than that of the garden and it drains well. My potting medium consists of screened compost mixed with poultry grit, perlite, or coarse sand. Tomatoes may also be grown in hanging baskets with the stems allowed to droop.

Hopefully, your face won’t droop when trying to decide the best options for growing your tomatoes.

There will be no time for drooping of face when tackling these gardening activities this long weekend:

• Transplant pepper, eggplant, squash and melon seedlings to the garden this coming week. If space is limited, grow the vine crops on a trellis of some sort, e.g. cattle fencing. If seedlings of vine crops were not started indoors earlier this spring, sow seeds the seeds directly in the garden now. Soils are warm and germination and growth will be rapid.

• Apply a liquid fertilizer to give a quick boost to those annuals and vegetables planted in April or early May. As an alternative, sidedress with a granular fertilizer by scattering some fertilizer along each row or around each plant but about 4 to 6 inches away from the stems to avoid fertilizer burn to the plants.

• Take a packet of leaf lettuce seed with you each time you visit the vegetable garden. I've read that the late Jim Crockett of Victory Garden fame would do that; and wherever he found some bare ground, he'd sow a pinch of the seed. Good vegetable growers abhor vacant space.

• Organize a potato beetle picking party! Colorado potato beetles have made their appearance on the leaves of potato plants and will soon be found on eggplant and tomato plants as well. Hand-picking may the most effective method of control adult beetles.

• Begin moving some of your houseplants out to the porch or other outdoor locations. Protect the plants from direct exposure to the sun and strong winds, some things they have not been exposed to while living indoors. Repot any plants which have become pot bound. This is also a good time to prune back any plants which have gotten a little leggy.

• Sow seeds or set out seedlings of red poppy, a flower at the heart of John McCrae’s poem “In Flanders Fields” and now a prominent symbol of the sacrifices of so many.

Last weekend may have been the green flag to begin the race, otherwise known as the garden planting season. Look out for weeds and eliminate pests as you see them.