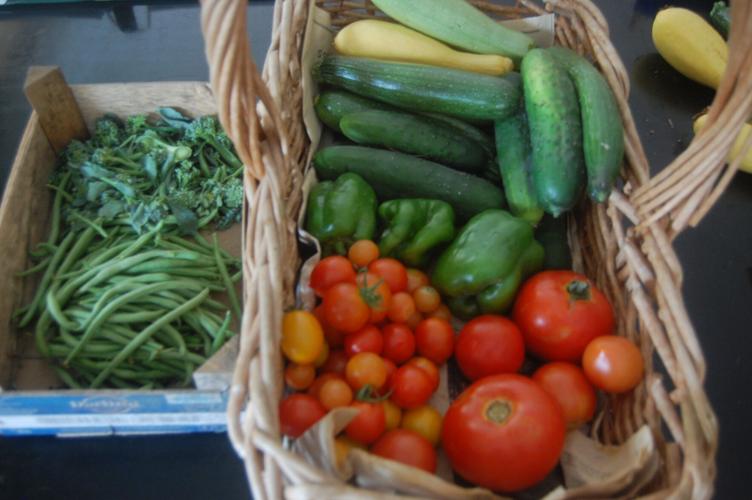 A morning's harvest from the vegetable garden. 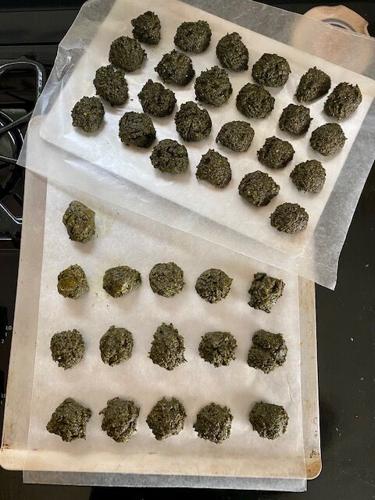 Gobs of homemade pesto on a cookie sheet ready for freezing. 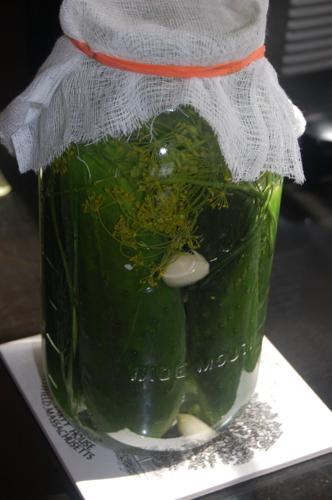 Not quite a peck of pickled peppers but, rather, a jar of cucumbers being pickled.

One thing leads to another. Now that is an idiom that certainly applies to gardening, especially vegetable gardening.

Advice from a compulsive plant buyer: Plan ahead before you purchase your next plant

With the arrival of August, most vegetables have reached maturity and the pace of harvesting has literally picked up. I am out in the garden soon after and sometimes just before sunrise. Not only is it more comfortable, temperature wise for me, but fruiting crops, e.g., sweet corn, summer squash, cucumbers, tomatoes, peppers, eggplant, green beans, etc., are at their peak of crispness and flavor in the early morning hours. With this frequent harvesting, that leads many of these same crops to continue producing more of their fruit.

Whether eaten the day of harvest or within a few days afterward, fresh picked vegetables are best stored in the refrigerator. Of course, with frequent harvests or with high yield crops, there will often be more vegetables than can be consumed in a short time. That leads to implementing a strategy for preserving these vegetables. My wife, Pat, is skilled at many of the various methods of food preservation, including freezing, canning, fermenting, pickling, and dehydrating. As such, this family will be enjoying the fruits of our labor for many months after harvest. For those not familiar with these methods, a great source of information is the USDA’s National Center for Home Food Preservation website or the book "So Easy to Preserve," published by the University of Georgia Cooperative Extension.

There are several crops whose harvests have already been completed or will be shortly. That leaves empty space and, as per another idiom, nature abhors a vacuum. Left to Mother Nature, that space will most likely quickly fill with weeds. That leads gardeners to fill those spaces. One obvious way is to simply plant more vegetables. These should be crops with a short growing season, such as radishes and leafy greens, or those of a longer growing season but can withstand a light frost. The latter include carrots and beets as wells as members of the Crucifer family, i.e. cabbage, kale, kohlrabi and turnips. These can be direct seeded now. It is also worth a gamble to sow peas and bush-type green beans.

As an alternative, fill those empty spaces by sowing seeds of a cover crop. Cover crops not only choke out weeds, but they take up mineral nutrients that would otherwise leach out of the soil. When tilled under, cover crops enrich soil by contributing significant amounts of organic matter as they decompose. My favorites to plant now are buckwheat, oats and sudex (sorghum-sudangrass). These are not hardy and will winter-kill leaving a layer of dead plants on the soil surface, thus reducing soil erosion through winter. The debris is tilled under in spring about 2 weeks before any vegetable crops are planted. Mustard is another cover crop I plant now, specifically in areas of the garden where garlic is to be planted this fall. The reason being that mustard acts as a bio-fumigant, that is, it releases organic chemicals called glucosinolates that suppress soil-borne diseases, including nematodes, a major problem of garlic in recent years. Again, this cover crop must be tilled under about two weeks before planning garlic.

If I add one more thing to this list of tasks, it will surely lead one to abandon gardening in favor of another activity such as lollygagging.

Mow the weeds, let the dill go to seed and pinch off the new flowers on tomato, squash and pumpkin plants

Having reached an age which some would call “ancient,” it does take me much longer to accomplish some basic tasks. Keeping up with weeds in the vegetable garden is one example. They have really gotten away from me this year.