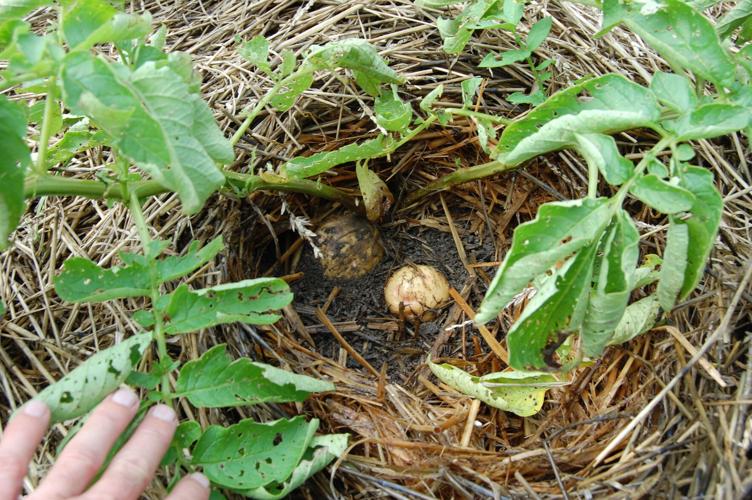 Potatoes beneath straw are easy pickings. 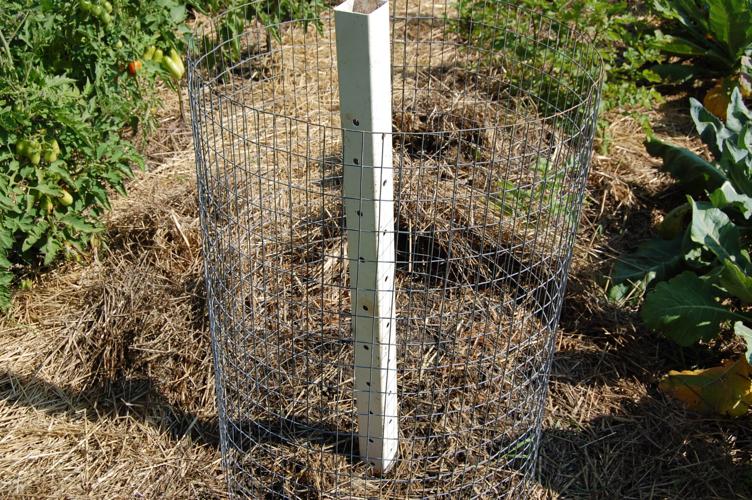 A fabricated compost bin made from a section of fence. A drain pipe with holes drilled into the sides provides air and moisture to the center of the pile, aiding the decomposition of organic matter.

What is a garden? “Now that is a silly question” you may be thinking … or shouting.

Well, a garden can be many things. It can be a beautiful display of perennial and/or annual herbaceous plants. It can be an island of shrubs in the middle of the lawn or along the foundation of your house. It can be a source of food for the homestead. It can be a meadow, mowed annually in late fall. However, it can also be a laboratory, a place to experiment.

Frankly, I believe that committed gardeners are always experimenting. It may simply be trying a new variety of plant. It could also be a different approach to growing a vegetable. As an example of the latter, I tried a different method of growing potatoes, or rather, some of my potatoes. Most of my potatoes were grown in the classic manner. That is, I made a deep furrow in which the seed potatoes were set. As the shoots grew, soil was hilled up and around the plants. In the experimental approach, the seed potatoes were set in a shallow one-inch deep furrow and then covered with a little soil. As the shoots developed, they were mounded with straw rather than soil. The idea is to make it easier to gather the spuds, especially when seeking some “new” potatoes; no prodding deeply into soil. Rather, all I have to do is push aside some straw and pick a few of the potatoes.

Admittedly, this is not a new concept for growing potatoes. I got the idea from several websites. However, it is a new method for me. As with any experiment, you do not know what the outcome will be. In this case, the results were a bit mixed. Yes, I got potatoes, including some very large ones, but I also had considerable problems with voles gnawing on the tubers, far more than they do on those grown via the traditional method.

Will I continue to grow potatoes using the straw method? Yes! But I will also grow using my past approach.

THE BEST WAY TO COMPOST?

Another experiment is one dealing with composting. There are so many ways to compost kitchen and yard wastes from simply piling up the materials in an out-of-the-way spot or by spending lots of money on elaborate compost bins. I’ve tried them all and always come back to the “pile”. Last fall, I contained the pile which consisted mostly of shredded leaves by creating several cylinders of 1-by-2-inch fencing and dumping the waste materials into them. These were set up in the vegetable garden. The organic materials quickly compressed and, as a result, were slow to decompose. Nevertheless, by spring they were broken down enough to be incorporated into the soil but I had to wait a bit before feeling comfortable enough to plant crops in those areas. If the organic wastes were not fully decomposed they would essentially divert nitrogen and other nutrients away from plant growth.

This year, I have built a similar fence cylinder but have put a section of drain pipe in the middle of it. The pipe has numerous ½ inch holes drilled into its sides. The idea is to allow air and water into the pile and speed up decomposition. The results remain to be seen.

There will be no waiting to see the results of these gardening tasks:

Garden Journal columnist Ron Kujawski has had enough of the weather and the havoc it wrought on his garden — especially his tomatoes.

Trouble takes many forms. Right now, the trouble in Ron Kujawski's garden is largely with Japanese beetles, who love to taunt him by feeding on the leaves and ripened fruit of his raspberry plants.

Ron Kujawski: Pray for the rain to stop — and while on your knees, do some weeding

I feel like I should simply repeat last week’s discussion regarding the impact frequent and often heavy rain is having on gardens, especially …

Ron Kujawski: Dreaming of key lime pie? You can grow lime trees in our climate — as a potted plant

Garden Journal columnist Ron Kujawski is dreaming of key lime pies baked by his son who lives in the state of Florida. He writes, "The pie has become such a favorite of mine that I wish key lime trees could be grown in our climate. Actually, they can be but as potted plants."

Ron Kujawski: Stop treating Labor Day like it's the end of the gardening season

Labor Day is usually looked at as the beginning of fall when the focus is primarily on harvesting and cleaning up the garden. If that is your sole focus now, then you are missing a golden opportunity to turn back the calendar as this is an excellent time to plant.