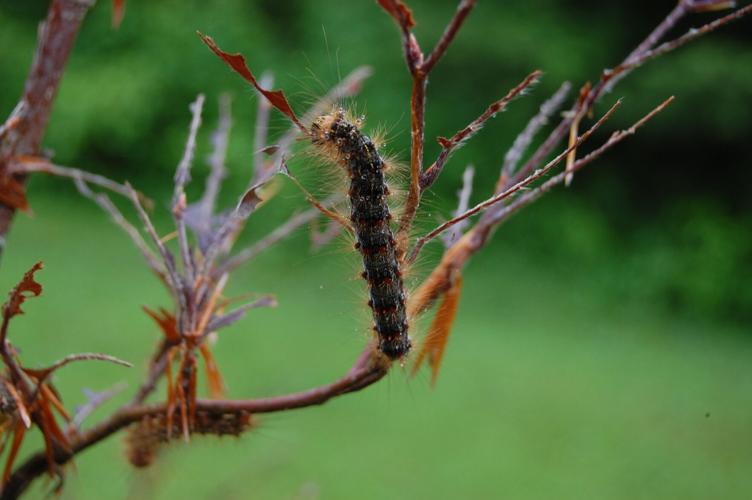 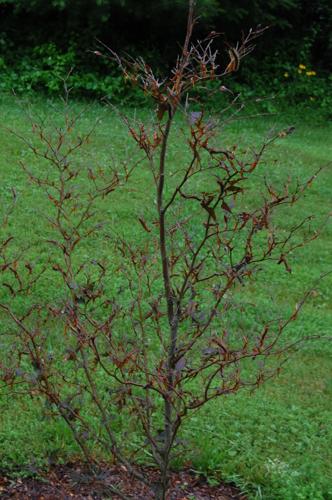 Copper beech sapling denuded as a result of feeding by dozens of gypsy moth caterpillars.

Copper beech sapling denuded as a result of feeding by dozens of gypsy moth caterpillars.

From 2015 to 2019, gypsy moth caterpillar infestations, and the related defoliation of woody plants, had been confined to the eastern part of the state. However, the problem declined considerably beginning in 2019 and is no longer of much concern in that region.

The primary reason for the decline was the presence of a soil-borne fungus, which goes by the name of Entomophaga maimaiga. Yes, I know, it would be easier to pronounce if we could just call the fungus “Bob”, or “Joe”. Nevertheless, it is this naturally occurring fungus that infects and kills the caterpillar.

Why it didn’t get the job done in 2015, and the following few years, was due to spring drought conditions that reduced the effectiveness of the fungus. With the return of moist spring weather, the fungus thrived and brought down the caterpillar numbers. I assume it is the spring drought of last year and, at times, this spring that explains the seemingly sudden increase in gypsy moth numbers here in the Berkshires and neighboring New York counties.

After that explanation of who these hairy crawlers are and why they are here, the next obvious question is, what we do about them. You could hand-pick them (wear gloves), but that’s tedious and it is easy to overlook the smallest caterpillars. Actually, the answer is much simpler: spray. Of course, you can do this to control the caterpillars that are defoliating shrubs and small trees. On larger trees, such as oaks, a favorite host of gypsy moth caterpillars, that would be beyond the capability of a hand-held sprayer. If the damage to large trees is of concern, then it would be a task for a certified arborist who is a licensed pesticide applicator.

As for home gardeners, the best material to spray onto bushes and small trees is the biological pesticide Bacillus thurigiensis kurstaki (e.g. Monterey B.t.) applied directly to the leaves. This product is available under several trade names and is readily available at local garden centers. A friend of mine said he had success spraying with neem oil, another organic product. Usually, these sprays work best on the younger stages of the caterpillar, but I am seeing gypsy moth caterpillars at many stages of development. As such, I would not yet hesitate to apply the B.t.

Since both these products could disrupt pollinating insects, the best time to spray is early morning or late evening. Repeat applications may be necessary. Always read and follow label directions when using any pesticide, organic or not.

MEANWHILE OUT IN THE GARDEN ...

Well, if feeling stressed by gypsy moths, here are some relaxing gardening tasks:

Last week, it was pest patrol; this week, it is pea patrol. Peas are ripening fast and need to be picked routinely, lest the peas become what …

Ron Kujawski: No room for a garden? Grow veggies in containers instead

Judging from the sales of vegetable seeds and seedlings at local garden centers the past two years, the urge to grow one’s own food is a stron…

Ron Kujawski: When it comes to grass, greener is not always healthier

Are you a green-lawn fanatic? To find out, take this simple test:

Ron Kujawski: Have a 'black thumb'? A spider plant can survive all kinds of abuse

If someone were to ask me to recommend a houseplant, my first choice would be spider plant, otherwise known in botanic circles as Chorophytum …

Ron Kujawski: Wait! We know the weather is warm, but don't plant those tomatoes just yet

Temptation could be defined as the desire to do something wrong or unwise. Well, I must confess, given the early summer-like weather of late, I have been tempted to transplant my tomato, pepper, eggplant and other tender seedlings to the garden. However, what I lack in wisdom is overcome by what experience has taught me, and that is to be patient.