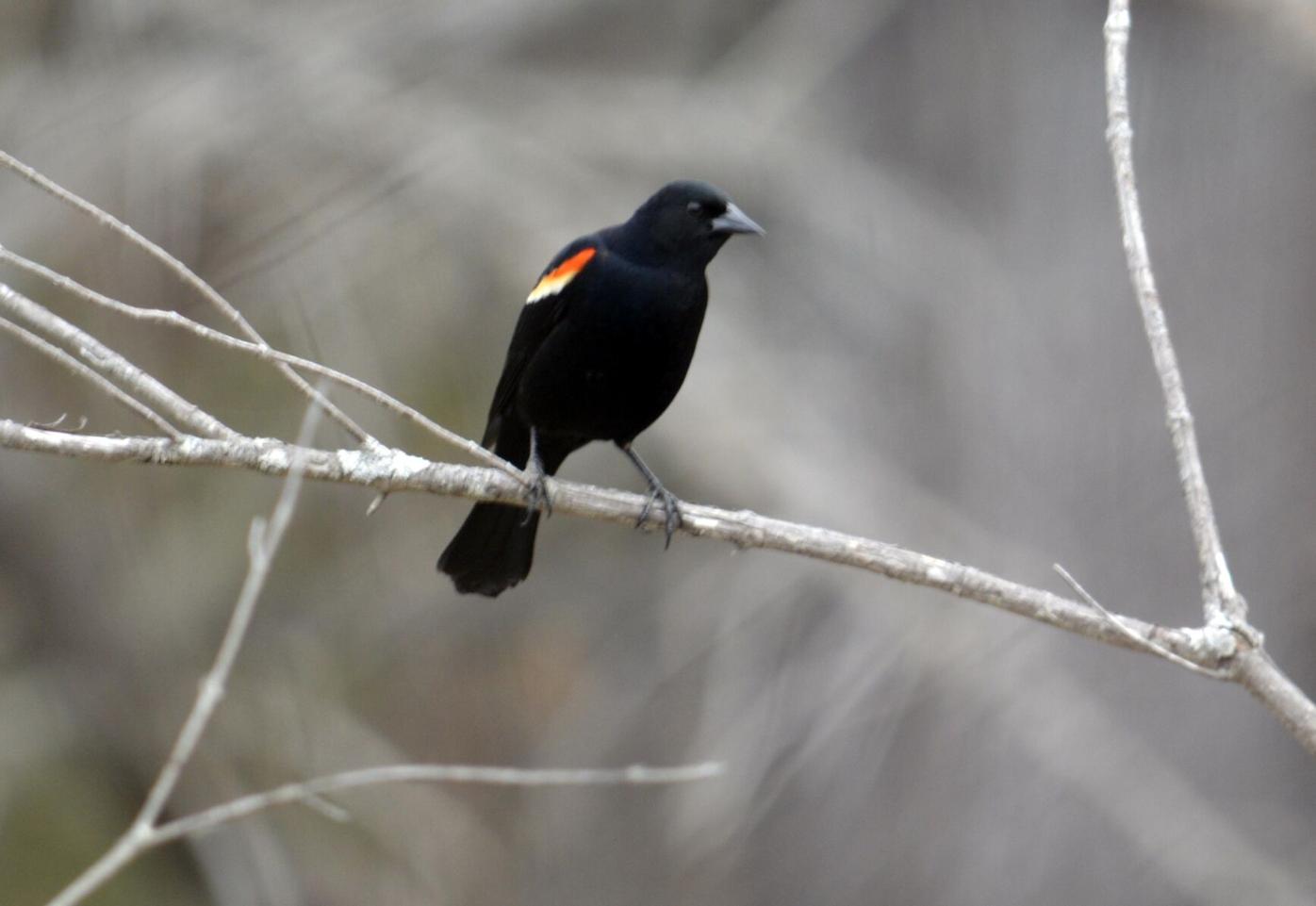 A red-winged blackbird perches on a branch at Canoe Meadows in Pittsfield. These birds normally come to the Berkshires in February, but more and more are coming earlier in the winter. 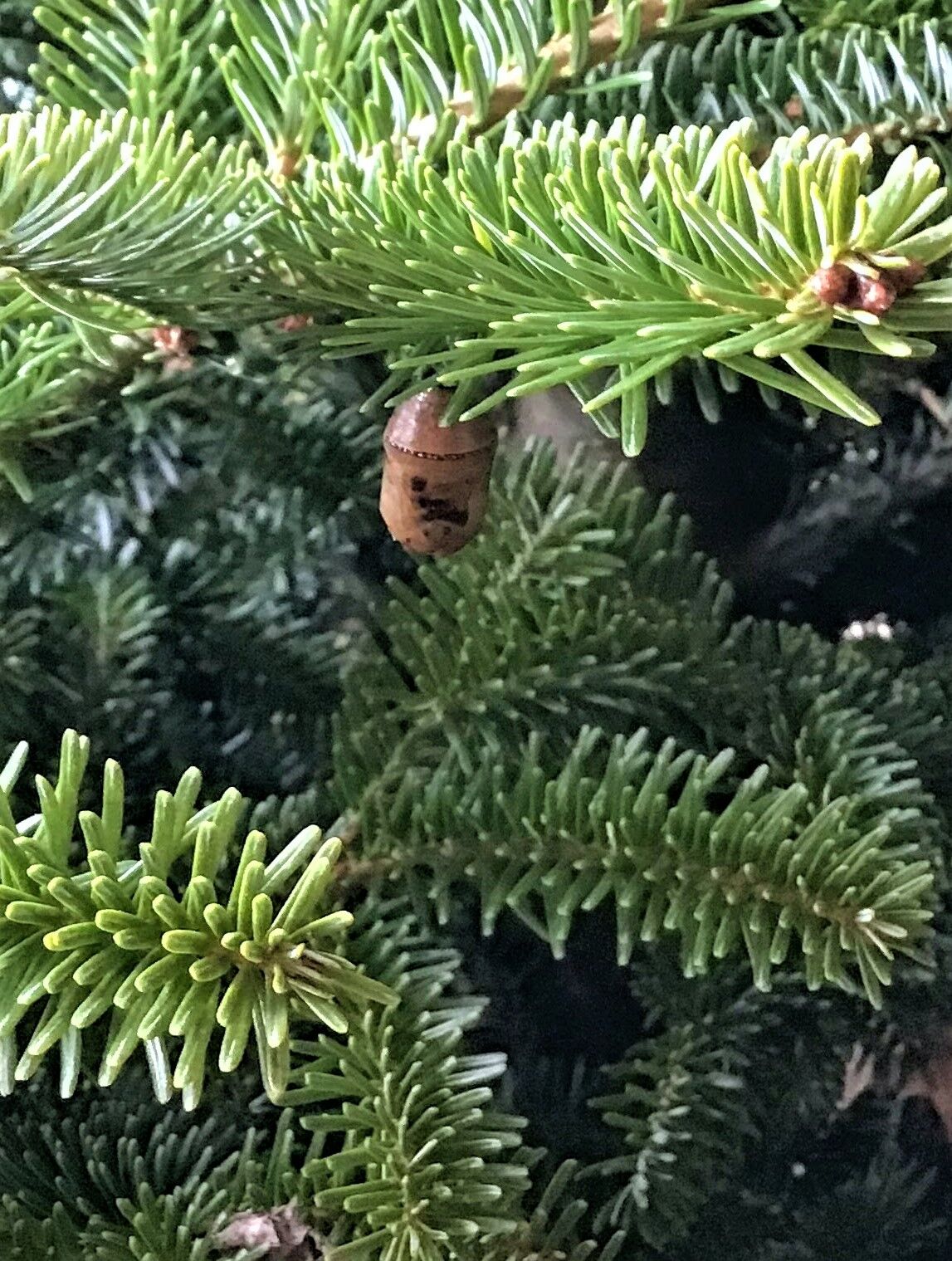 JoAnn Buffoni sent a photograph of an unknown item found nestled in their Christmas tree. Turns out, the mystery item was an empty monarch butterfly chrysalis.

Q: For the first time that I can remember, we have red-winged blackbirds here in Hinsdale, in December? I noticed a dozen with a flock of starlings back in November. It was so strange to hear them so late in the fall, now I notice at least two are continuing to visit my feeder. Has anyone else noticed this? Are our winters really becoming THAT mild?

A: Like the answer to the next question, it is not odd, but slightly unusual, although less so every year it seems. Small numbers can be found in the Berkshires along river valleys and sometimes at bird feeders throughout the winter months. And recall the days we looked for Robin Red Breast as a sign of spring, well long before robins come in numbers, red-wings begin coming in mid to late February. In Bartlett Hendrick’s 1950 "Berkshire Birds" he writes, “These blackbirds are fairly hardy and have been found in winter in Lee and Pittsfield.”

This is the first report I have received from readers, but will have a more concise idea as to numbers in our next column, when I include the three Christmas Bird Counts held every year in Berkshire County (and nearly every other place too).

Q: We had a pair of song sparrows nesting somewhere near our home located on the edge of a small field. And during the season we would sometimes see them at our bird feeder of mixed seed. I looked it up and it is a summer bird, but now we have one coming nearly every day at the same feeder. Could it be one from summer? And is it odd that a summer bird be here in the winter? Though we see a few robins lately too.

A: It is not odd, and only slightly unusual. The species is a very common resident in the summer, but is also regularly seen through the winter months. We have one visiting our milo seeds and sunflower seed feeders. Sometimes it arrives with the small flock of dark-eyed juncos (the snowbirds) that are regular winter visitors sharing the same feeders and may be traveling with that flock, though it may also be a coincidence. In Bartlett Hendrick’s 1950 "Berkshire Birds" he writes, “There are numerous winter records from both ends of the county [lower elevation] and a few from the Pittsfield area.” The most recent "List of Birds of Berkshire County," by David P. St. James, 2017, notes, ”The song sparrow is a very common summer resident, migrant, and is regularly seen through the winter months.” I imagine that as winters continue to warm, song sparrows and many other birds will bother less in heading south come fall.

A: It is well known that monarch butterflies are often where milkweed is found. The adults feed on the flowers and the larvae feed on its leaves — it's only food is milkweed leaves. This doesn’t mean that the caterpillars anchor their chrysalis in which they will morph into a full fledged butterfly on a milkweed plant, or sometimes not immediately nearby. In this scenario, the spent or empty chrysalis shell was left for a decoration!

Not all plants lose their color in the winter. These brave and resilient forest plants retain their colorful greenery year-round

A NOTE ON CLIMATE CHANGE

This information is an interesting note from Glenn D'entremont of MassBird, commenting on the reason we're seeing more birds, such as the great blue heron lingering longer than usual: “The issue with the climate change here in New England is the increase in nighttime temps. So the low temperature for the days are rising faster than the average [temperature] for the days. This allows the 'semi-hardy' lingerers to linger longer. So we have more reports of sapsucker, house wren, yellow-throated warbler, hummingbirds (!!), phoebes, vesper, clay-colored and white-crowned sparrows, and Baltimore orioles; not to mention those wayward Townsend's warbler (and solitaire), western tanager, ash-throated flycatcher, and painted bunting (just as examples)."

For more information about MassBird and affiliates go to massbird.org.

You will be surprised about what is happening among our feathered neighbors in the Commonwealth!