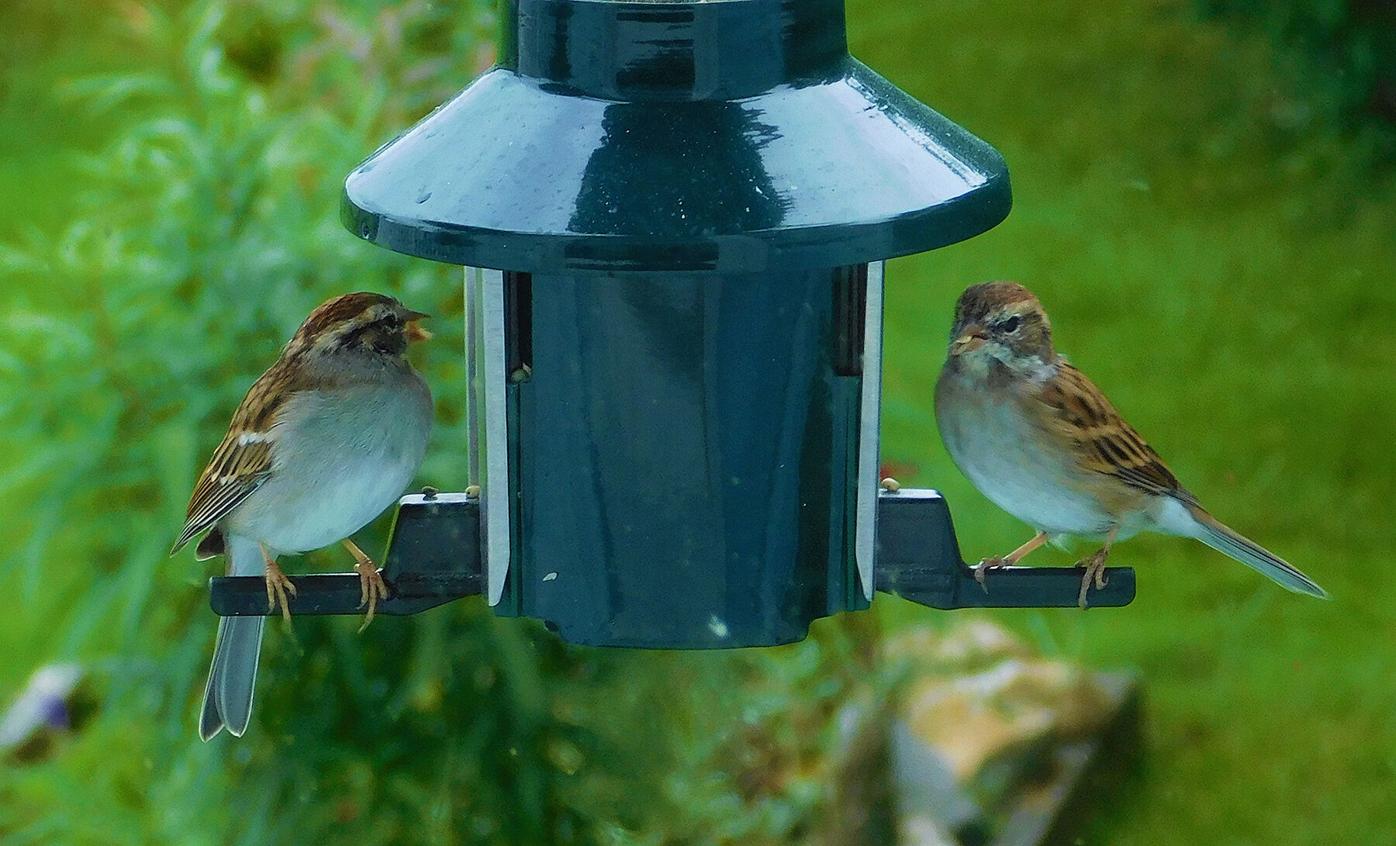 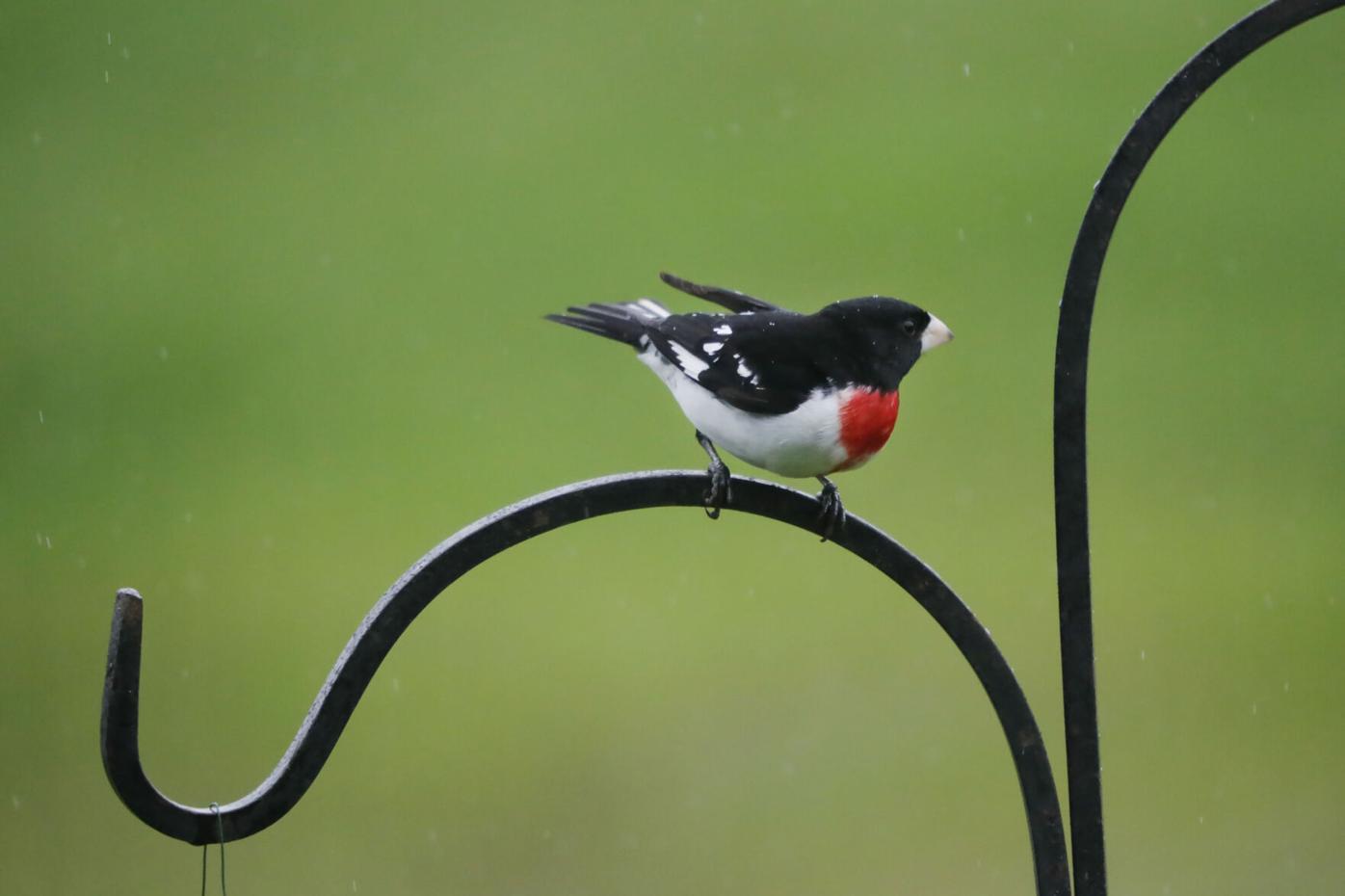 Had I lived 100 years ago and taken an interest in birds in the 1800s, I might have been told that the chipping sparrow (Spizella passerina) was “a hair-bird” because it lines the nest with horsehair, and animals were more commonplace. Back then, we were more rural, and horses and farms were abundant. Lucky is the “hair-bird” who builds a nest near a farm now. Today, the female finds plant fibers, rootlets and maybe down to line their nests, replacing animal hair.

Although, I wouldn’t be surprised if some “country folk” might still use the nickname “hair-bird” today; but most settle for its modern name, the chipping sparrow, so named because of its somewhat musical chips.

For the past couple of years, I have had a “peeping Tom” watching me as I sit at my computer, often spending a few hours writing this column or other busy work at my desk. Frequently, I look out a window adorned with bird feeders to see the activity. (More so during the winter months, but now with a mixed seed and a suet feeder this summer.)

As I am writing my weekly column, one is perched on the window sill, watching my every move, or that is what I assume. I say “it” because both appear the same to me regardless of sex. “Chippy” is my often-used nickname, not knowing if it is a he or she. I cannot distinguish the sexes of this species by appearance. There is possibly one exception with a chippy, who regularly comes to the feeder and exhibits “wing-flutter,” something females do when the male brings her food and she is on the nest. I assume this is a she. Repeatedly, this individual will flutter at the feeder before eating! Another subtle way to distinguish males is that when arriving in the spring and begin deciding upon a territory, they will conspicuously perch and sing.

Chipping sparrows prefer city parks and open neighborhoods with evergreen and deciduous trees, shrubs and grassy openings. We are lucky to have spruce trees and deciduous shrubs beyond a narrow open field on one side of our home and, closer to the other side, an arborvitae hedge. Both have chipping sparrow nests. So, to be fair, I provide seed for both.

Last spring, while working in the garage (where I keep birdseed and sometimes spill birdseed), I walked in on a chipping sparrow cleaning up my mess. Upon seeing me, it leisurely hopped out. Following this episode, I began placing a small seed tray outside the door, where I often find a chippy eating millet seed.

It appears the species is fairly domestic, and far less cautious of us than many other birds.

Q: Why do we sometimes see buzzards with black heads, while most of them have reddish heads, like one I saw at the end of this past April? This seems strange to me, and I can only wonder if it is male or female, or maybe even young or adult?

A: I have another idea: could it be a difference in species? And the answer is, yes. The red-heads are turkey vultures, although, juveniles have a dark grayish head (July to November of the first year). Both adult and juvenile have long tails in comparison to the black vulture. And the underside of their wings have silvery flight feathers the full length of the wings.

And, for all purposes, the black vulture is almost all black although on close inspection adults have wrinkled gray heads (that in comparison to the turkey vulture appears black). One good way to identify this bird, if you can see its undersides, is its wingtips are silvery, and the rest is black.

We read your column every week in The Berkshire Eagle. It is the bright spot in our day. We enjoy bird watching and, finally, the goldfinches are back. On April 29, we had three hummingbirds come to the feeders. But what I wanted to tell you is that, on Saturday, we had a rose-breasted grosbeak. Usually they come in June, so these two are very early. They are such a contrast to the cardinals. We have so many cardinals all the time and I feel the angels, are here, too.

Please keep up your column and keep us informed of all the news.

Thom’s answer: Rose-breasted grosbeaks usually arrive by mid-May, with a few anxious individuals arriving in late April. On May 7 of this year, I had one stop by the feeder briefly, a first for me, having never had one looking for a handout at the feeder.

Thom Smith: Hummingbirds return to summer in the Berkshires

NatureWatch readers share their hummingbird sightings so far this spring. Have you seen any hummingbirds yet?

Thom Smith: Help us keep a (Nature)watch on arriving hummingbirds

This year, NatureWatch welcomes reports of the first sightings of ruby-throated hummingbirds with the number seen, date, location and your name. Please email Naturewatch41@gmail.com.

Almost everyone has heard that the once common monarch butterfly is in danger of vanishing from the Americas.

Several Naturewatch readers have contacted me about the loud, prolonged trilling coming from suspected nearby trees without finding the cause.…

In this week's NatureWatch, columnist Thom Smith answers a reader's question about the birds taking up residence in bird houses intended for bluebirds.