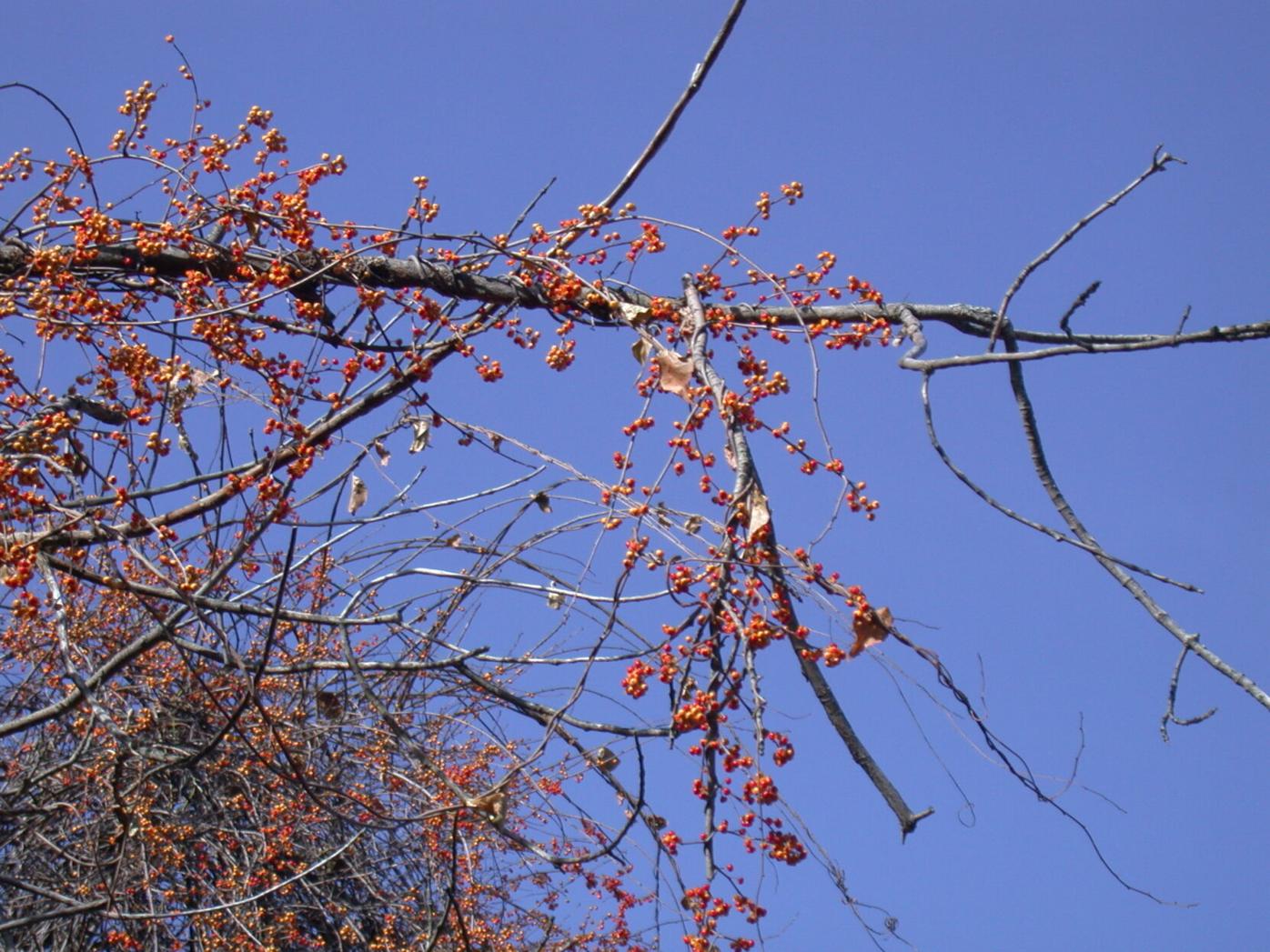 The invasive bittersweet vine can be seen hanging from the limb of a tree. 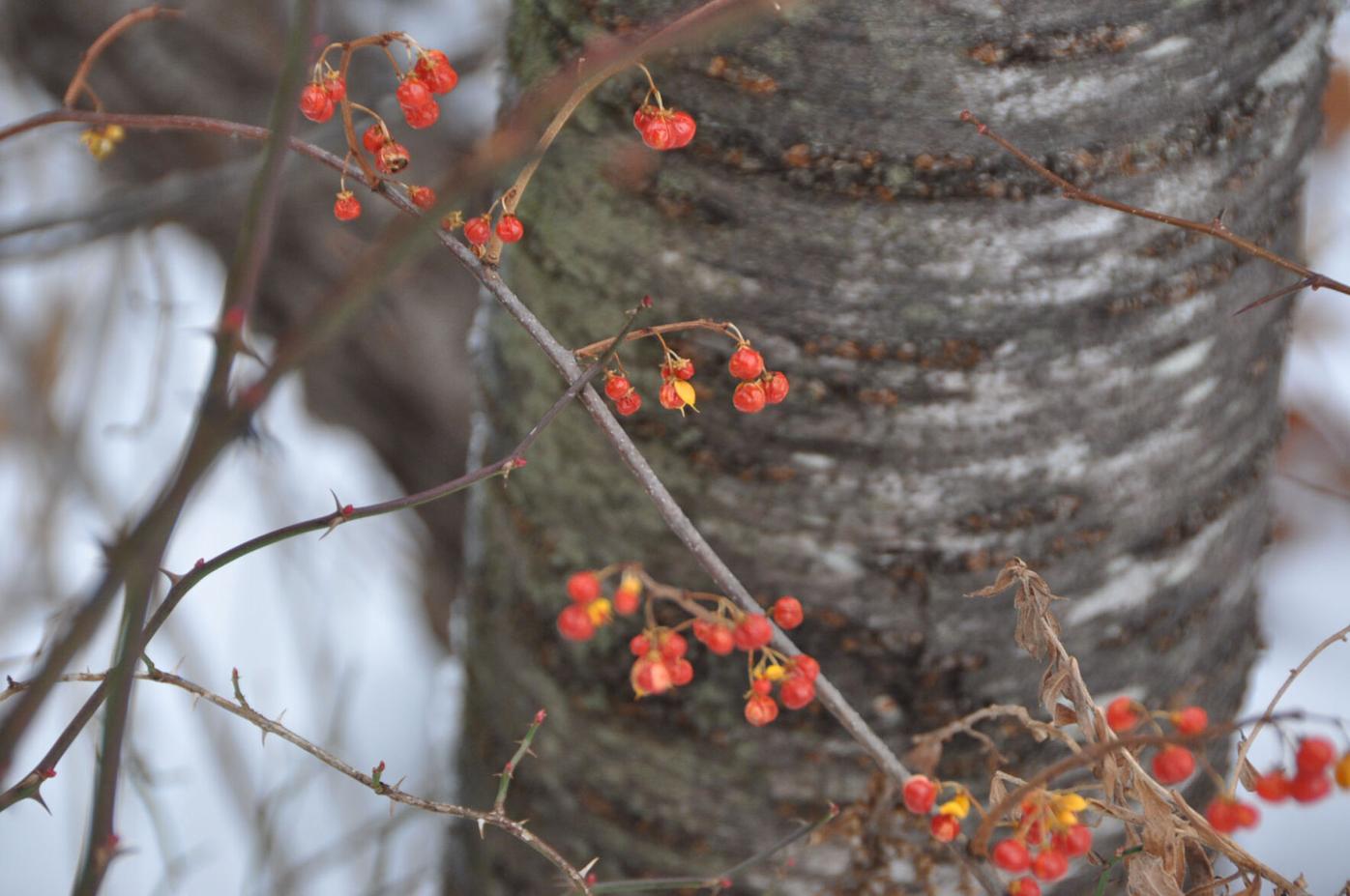 American bittersweet, a vine that is best known for its red berries that brighten up winter landscapes, are invasive and should not be used for decorations.

Q: My wife and I have been out driving around (when it hasn’t been raining) to see what fall foliage there is. And along many roads, both back roads and main highways, we see vines like grapes and bittersweet seeming to smother trees and shrubs. Apparently, the bittersweet is the worse. It must be an invader, or it would have been around for many more years. We are in our late 60s and don’t recall seeing it when we were young. Is it a foreigner? If so, where did it come from? And whatever else you know?

A: I am not sure when it reached the northern Berkshires, though, in the early 1960s, I began seeing it along Route 7 in Stockbridge by Monument Mountain. On several trips along that highway, I saw cars parked along the road and people out cutting the vines, apparently for fall decorations.

Call it either Asian or Oriental bittersweet (Celastrus orbiculatus), it was introduced to the United States in the 1860s from east Asia, and since has naturalized extremely, becoming an aggressive invader to say the least.

In Massachusetts it is prohibited to import, propagate, or to sell or purchase, as of Jan.1, 2006.

Although it is colorful with fruit that begins as green to a yellow capsule and ripens as fall strengthens to show a red and yellow color, the bright red is probably the highlight of this berry. Don’t let the vine deceive you, it is a killer! The vine itself grows up on anything it can find, from fences to telephone poles. And it is trees, especially those in active growth, that are most vulnerable to this vine that is tremendously tenacious. As it grows, it wraps itself around its victim, one that is not strong enough to break free of the vine and grows around it and in doing so eventually kills it. A better explanation may be as it grows up, say a woody plant (tree), it shades and girdles it, causing damage to the trunk and to branches, eventually strangling its “prey.” It doesn’t actively strangle but as the tree grows it is strangled and eventually its being cut into.

It mostly invades edges of tree stands and rows, and hedgerows, as it prefers sun. It can, however, thrive in partial shade, throughout all regions of Massachusetts as well as all of the New England states.

In "Flora of Berkshire County, Massachusetts," Pamela B. Weatherbee mentions two bittersweet species, “oriental Bittersweet – Common. In woods, hedgerows, roadsides. An aggressive destructive weed, climbing over vegetation, and winding around trees, strangling them. Introduced from Asia.” And the native American Bittersweet: “Similar to the preceding, but not as high climbing or aggressive.” This species is found occasionally in calcareous soil “exposed calcareous rocks as in marble quarries.”

MORE ON THE JUMPING WORMS (AJW)

Readers want to know: Wait, what are those dancing horse-like hairs moving in the water?

Hal and Margarie, of Williamstown wrote: “In answer to your request for information on Asian Jumping Worms, we discovered them three years ago when the wheels of the lawnmower sank down into the lawn (hard clay soil) near a flowerbed (apparently they came in with potted plants.) We also noticed small mounds of pushed up dirt in that area. Now they've spread by the thousands over our whole lawn and garden. They live near the surface, so covering an area of the garden with clear plastic seems to make that area too hot for them. The surefire method is to pull back dead leaves or sod, grab the crazy worms, throw them into a large bucket with some wood ash, shake the bucket and leave them until they die. (Without the wood ash or something, some will climb the sides of the bucket.)”

Another reader comments: “I was interested to read your column about the AJWs today. I cannot stop reading about what residents throughout the country are doing to reduce the number of worms. I still am picking and putting beer out. I find a surprising number in the containers, but my friends tell me to drink the beer and then the worms will not bother me.”

Problematic woodpeckers damaging wooden molding on a house; robins seen in recent weeks and a virtual jumping worm conference at the University of Massachusetts Amherst are a few of the topics discussed in the week's NatureWatch column.