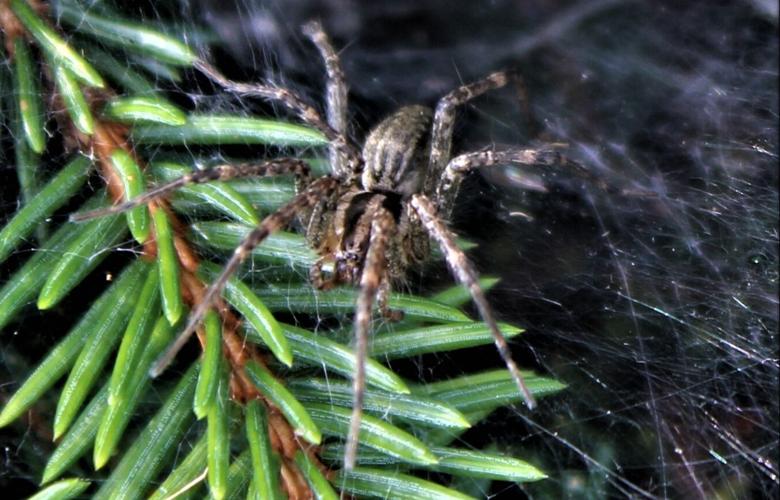 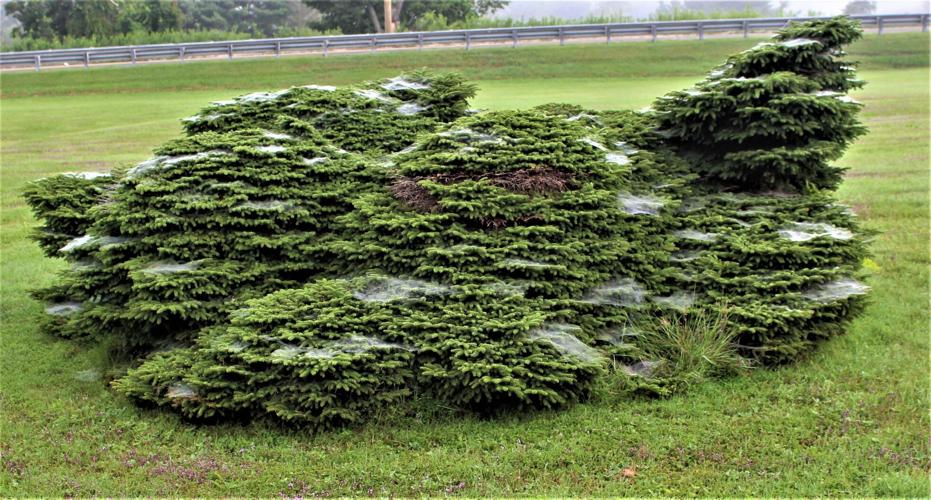 The American grass spider often constructs webs on lawns, in fields, and on low evergreen shrubs.

Q: How do these delicate, gossamer wonders form? (a photo was included). They are on my shrubs and in the grass and have no visible filaments.

A: It took me a while to arrive at an identification of what exactly spins these webs. Several of my regular sources did not know until I asked a long-time source, Lisa Provencher, who has long been a source of insect queries that baffled me. I neglected to contact her earlier because spiders are not insects. Foolish of me. Lisa explained that it is one of the Angelenopsis, commonly known as American grass spiders.

When Naturewatch was young and went by the title Ask Mr. Smith, my editor, Ruth Bass, who also incidentally allowed me to write for The Eagle’s Sunday Sampler first brought these mysterious clouds forming overnight on her lawn to my attention. She called them "Fairy Webs."

For many years I have noticed their webs becoming more plentiful as summer progressed and, for some reason, never took the time to sneak up on a web close enough to see which spider made it. This query was the nudge I needed, and I began sneaking up on the traps with a camera and close-up lense determined to capture a spider at the mouth of its tunnel. Careful inspection will reveal each web with a tunnel the spider will retreat into at near lightning speed when a dangerous or inquisitive visitor approach.

If you touch the web, you will notice that these are not sticky, unlike many other webs. When an insect prey is detected, the spider will rush out rapidly to capture it. Often the insect will be eaten (sucked dry of its fluids) immediately at the capture point.

Their nests are most obvious early in the morning when dew highlights their constructions. And while they often build on low shrubs like junipers or other evergreens, they also cover large expanses of lawn web by web. These spiders also construct their webs around lawn and deck furniture, I have noticed, causing me to avoid moving our furniture too frequently, now that I have come to know them better.

Q: Caught in the act: Squirrels took 48 bulbs off my string lights. My neighbor caught them in the act too. Something in the lights is plant-based which makes them think it’s food. That’s what I was told. I didn’t understand it either, but from hearing from my neighbors, they saw them hiding them after biting them off. I have a video of them chewing them off or I wouldn’t believe it. Any ideas how to stop them as it’s expensive to replace all the strings of lights.

A: Apparently, this is something that has bypassed my education! And the answer lies on the internet; although I assume you are not referring to Christmas Lights, decorative lights are decorative lights: pestpointers.com/ways-to-stop-squirrels-from-eating-your-christmas-lights/.

It isn’t something in the bulbs that is plant-based, but the shape of the lights resembles food. We lived in Dalton for about 40 years, and we often decorated outdoors with Christmas lights. Now that we are in Pittsfield, we also hang Christmas lights and have a few non-holiday lights through the year. Gray squirrels are numerous in the neighborhood, and I never saw this or even heard of this at any season until you brought it up, Cheryl.

It is simple when we think about it. When winter comes, gray squirrels become desperate and search for any food source they can find; they assume the lights are acorns or something similar and remove each to return to their winter nest. Why they are stealing lights at this season dumbfounds me, as they have food aplenty. They chew through the wires that string the lights together to get to the lights themselves. (Like mice, they will also nibble on any electrical wire, sometimes causing a hazard.)

To curtail this habit, you can spray in the vicinity of the lights or soak cotton balls (adding a snowball effect to your ornaments) with rodent repellent or peppermint oil. I would not recommend spraying the lights themselves for safety.

There has been considerable conversation relating to the Emerald Ash Borer, here are three web sites with information that might answer many questions:

Thom Smith: Don't put away your feeders just yet; hummingbirds are known to stay in the Berkshires a few weeks longer

Although the date for hummingbirds to migrate south has arrived, some hummingbirds have been spotted much later, into October and November, before moving on.

Thom Smith: What kind of vine is swarming over the shrubbery? It may be a wild cucumber vine

Pamela B. Weatherbee writes in her “Flora of Berkshire County, Massachusetts” that the wild cucumber “Can be aggressive, swarming over other v…

Thom Smith shares a few ways to preserve flowers and reeds. He also responds to a few questions about luna moths and the full moon.