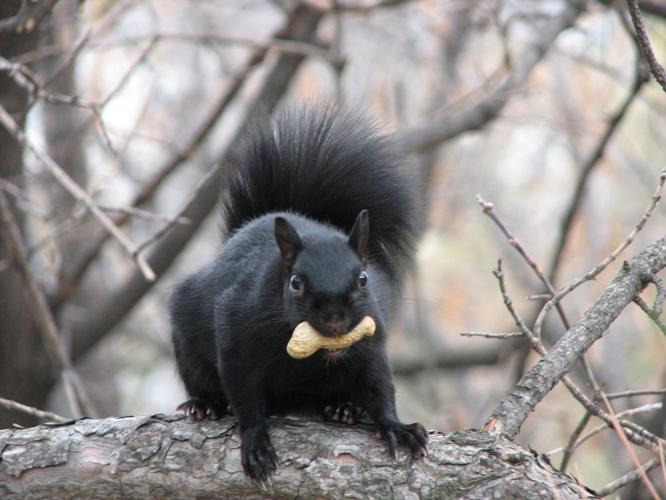 This black squirrel is just an Eastern Grey Squirrel with black fur. 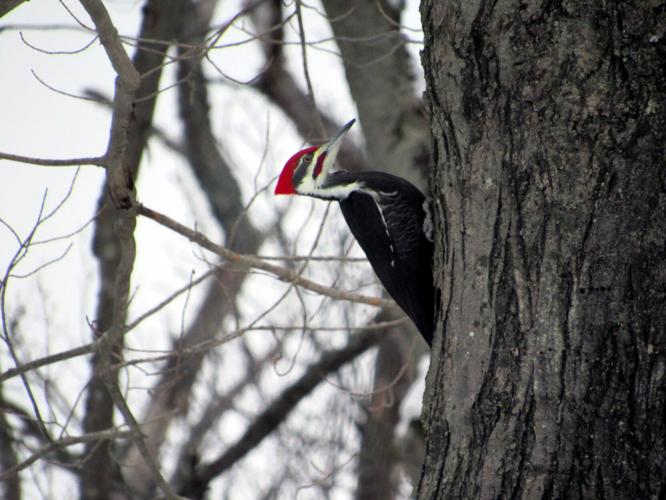 A pileated woodpecker photographed in Florida by Frances Bedini.

Q:  I am in my late 70s now, and when I was a kid, I spent most of my time in the woods and must admit they were thinner than they are today, and wonder if this might be the reason why we never saw even one Pileated Woodpecker out in West Pittsfield? Today, we visit, even if to only to enjoy The Pittsfield State Forest.

A: It does have something to with the numbers and size of trees then and the numbers and size now. History tells us that looking back closer to the days when “The Ghost of the Forest” was so named it was very rare. I recall refreshing my knowledge of this largest of our woodpeckers from a most interesting nature book “Still Speaking of Nature” the second of two volumes by, a man who Pittsfield High School students would address as their biology teacher, Mr. Danielson. I came to call him by the cover title, Bill Danielson. In his chapter on "Winter," he examines subjects like Endurance, Frozen Water, a few mammals, various birds like Dark-eyed Junco, Common Redpoll, and yes, The Pileated Woodpecker. And why this species became ghost of the forest is explained, “By the time of the Civil War, a substantial portion of the Northeast had been cleared for farmland. At one point 70 percent of southern New England had been converted to agriculture, leaving precious little forest left for wildlife.” The farms and pastures have, for the most part, returned to forests and through the years the forests have become mature second growth. A good example may be found on the internet if you visit: https://harvardforest.fas.harvard.edu/diorama-series/landscape-history-central-new-england.

With mature trees, the woodpeckers that include the pileated now provide both food (often carpenter ants. especially) and just as often large enough trees to allow their hollowing out nest sites that over one hundred years ago existed infrequently. Come to think of it, even 70 years ago they were far less frequent than today.

1867: "Birds of New England," by E. D. Samuels: “This species is a resident in northern districts of New England throughout the year. It has been a known breed in Massachusetts; but, as a general thing, it is not found south of the northern border of this State.”

1900: "The Birds of Berkshire County," by Walter Faxon and Ralph Hoffmann: “Very rare, permanent resident. Doubtless this bird was once commoner here than it is now.”

1950: "Berkshire Birds," by Bartlett Hendricks: “Faxon and Hoffmann called the most spectacular of woodpeckers a ‘very rare’ bird. Today, while they cannot be called common, pileateds have increased so that they are distributed from the lowest to the highest parts of the county ...”

1955: "The Birds of Massachusetts," by Dorothy Snyder: “Formerly a common resident of heavy forests, extirpated by civilization and logging. Its range is limited to stands of good second growth, with nesting trees of the necessary size.”

1994: "Birds of Berkshire County," by Bartlett Hendricks: "At the start of the century our largest woodpecker was a very rare species, but today, with so much more of the country forested, they are widely distributed.”

2017: "Annotated List of The Birds of Berkshire County," by David P. St. James: By 1937, Hendricks notes that it had become more evident but still uncommon. It has a status today as a regular resident.

HISTORY OF THE BLACK SQUIRREL

As I understand the story of black squirrels, in 1948 there were only two black squirrels brought to Westfield from the state of Michigan by sales representatives of Stanley Home Products, in business since 1931. Today the company is known as Stanhome, Inc. There are different stories that the first two escaped or died, and others replaced these first two. The rest is news, because they eventually were conditioned to the area and released on the property.

Forty-eight years later, Westfield was a mecca for the melanistic strain of the common gray squirrel. In fact, they interbreed! Some say it is simply a melanistic version. While others believe them to be a mutation. Regardless, they are gray squirrels just black in color. And there is no dominant over the other, although some local observers believe the black are dominant over the gray. Although, they may mate with a gray and offspring can be either gray or black.

Through the years Naturewatch has conducted informal counts within the county.

In 1987, 50 black squirrels were counted from Adams south to Great Barrington with nine towns in between.

In 1988, 40 black squirrels were counted from Clarksburg and North Adams to Stockbridge, with eight towns in between.

In 1995, 56 black squirrels were counted from North Adams to Monterey, with 14 towns reporting, including Otis and Williamstown.

And 49 black squirrels were counted in an undated count with 40 towns reporting, including Pittsfield and North Adams. Even Mount Washington and Florida sent in reports.

Not many readers have sent in sightings to Naturewatch as of late, so if you do see them, please email Naturewatch41@gmail.com with your name, street and town, date and number of Melanistic (black) gray squirrels seen!

It is time for another count, don’t you think?