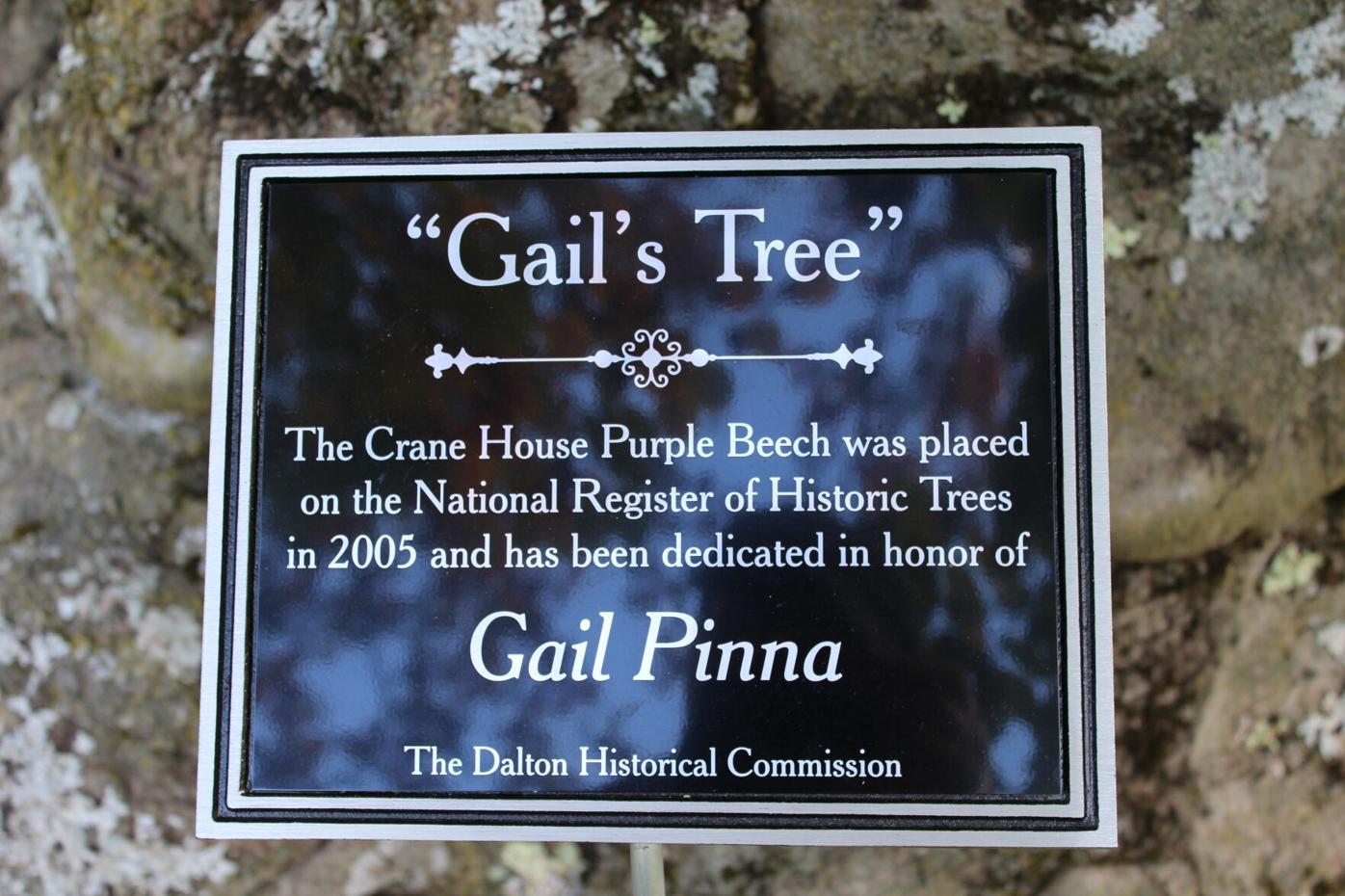 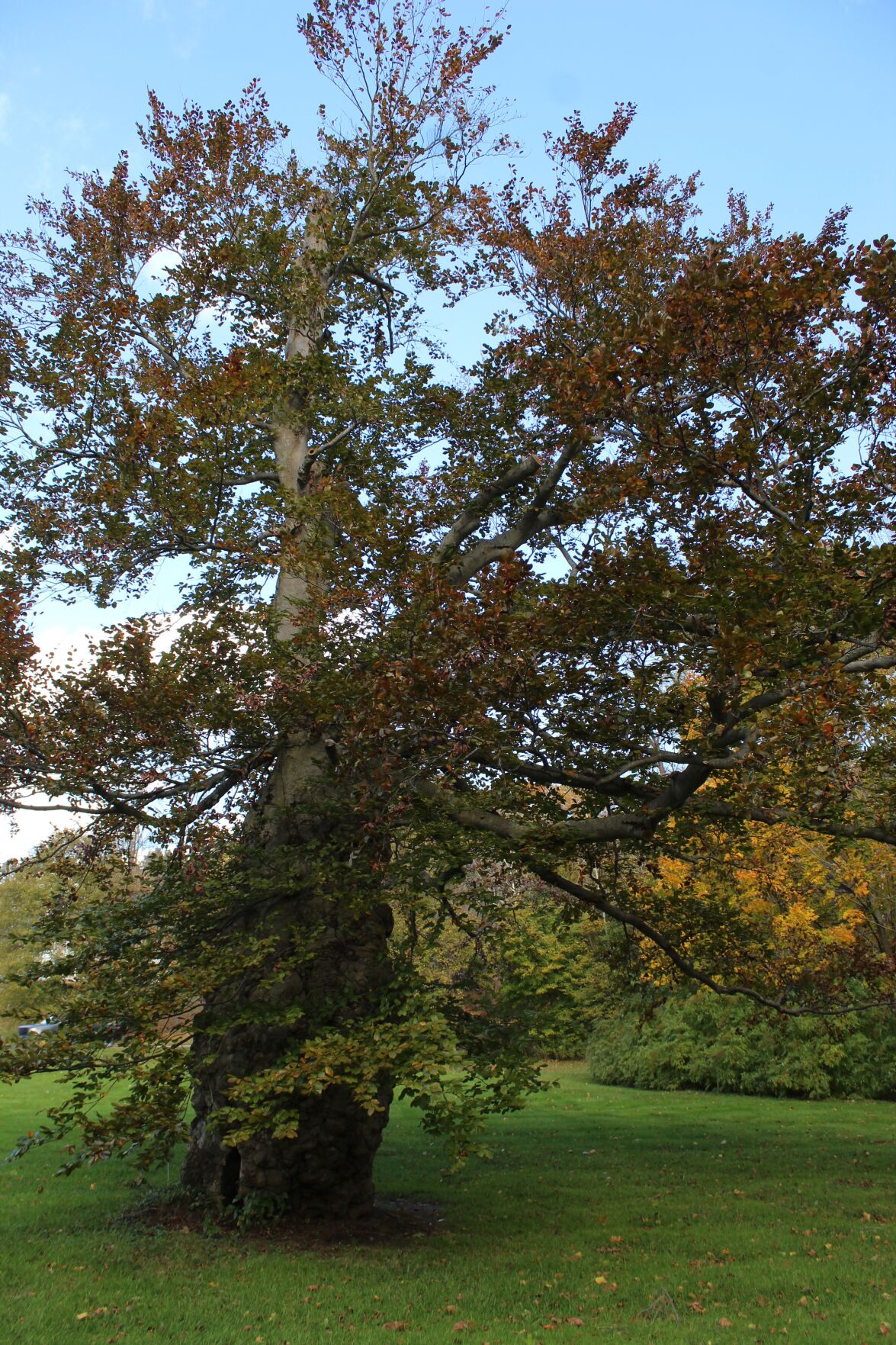 The Crane House Purple Beech, also known as "Gail's Tree," was placed on the National Register of Historic Trees in 2005.

Part of Gail Pinna's family gathers near the Crane House Purple Beech, which is dedicated in her honor.

A lovely October afternoon allowed the gathering of well over 50 of Gail Pinna's family members and friends on the open lawn across from Sugar Hill Assisted Living Community for the Dalton's Historical Commission dedication of the lone "Crane House Purple Beech" as "Gail's Tree."

The snowbirds have arrived. Does the early arrival of the junco mean that snow is coming soon?

Gail, who took it upon herself to ensure the tree was listed on the state's Registry of Historic Trees in 2005, died in September.

Like any such memorial, several speakers offered a few words, including Dalton’s well-known George White, chairman of the Dalton Historical Commission for the past 20 years and superintendent of Dalton’s cemeteries for 43 years. (I knew him as our young family lived near the employees’ entrance of the Main Street Cemetery where his office was for most of those years.) Other speakers included James Baking, a Crane employee who facilitated necessary permissions for the dedication, and Deborah Kovacs, the historical commission's project leader, who put together the memorial's design and contacted the family.

Many “newcomers” to this lovely town know little about this tree, including this writer, until Gail brought me there and began offering me tidbits of history of the area — like there was once a very large hothouse beside the pond behind Crane and Company’s Bay State Mill, just down the hill from what some of her friends came to call “Gail’s Beech.”

After that first visit, I would occasionally take the 10-minute stroll to visit “her” tree at different seasons, and always felt welcome. This tree, of many names in addition to purple beech, would also answer to copper beech, European beech, Atropunicea copper beech, and to the botanist, Fagus sylvatica Purpurea, if asked politely.

The Sept. 1, 2005, Berkshire Eagle reported: "The Crane House Purple Beech has been nominated to the National Register of Historic Trees by Gail A. Pinna of the Dalton Historical Commission." It goes on to report “Pinna submitted the nomination with news archives, antique postcards, and extensive research and historical documentation. The gnarled and twisted tree stands alone in the open yard of the Crane House.” The “Crane House” no longer stands.

Gail was involved in many aspects in Dalton, including civic and community organizations, as troop leader for both Camp Fire Girls and the Boy Scouts, a trustee for the Dalton Public Library, a member of the Senior Center and as secretary of the Dalton Historical Commission instrumental in researching and funding the Fitch-Hoose House, a stop on the Underground Railroad in Dalton. Gail also was knowledgeable of Dalton cemeteries and when I was president to the now defunct Main Street Cemetery would, on several occasions, give tours following Memorial Day activities. She was not just concerned about a “gnarled and twisted tree.” (And, by the way, for anyone examining the beech up close, the lumps and growths are probably caused in part by canker fungus, maybe Nectria.)

A very popular variety of European beech is the copper beech, a.k.a. purple (as mentioned above), although some experts regard it as a naturally occurring genetic form rather than a cultivar. This variety has coppery or purple-colored leaves that turn shades of red in the fall. It is a popular beech in ornamental plantings. One grand specimen with dark purple leaves grows on the grounds of Yale University in New Haven and is located on the eastern slope of Prospect Hill beside Yale’s planetarium.

The only native beech species in Berkshire County is the American Beech.

REVIEW: Peter Cavanagh's '100 Flying Birds' is an inspirational work worth picking up

Of the many dozens of bird books that I have read, skimmed, purchased or borrowed over 60 or so years, no one has inspired me more than Peter Cavanagh and his "100 Flying Birds."