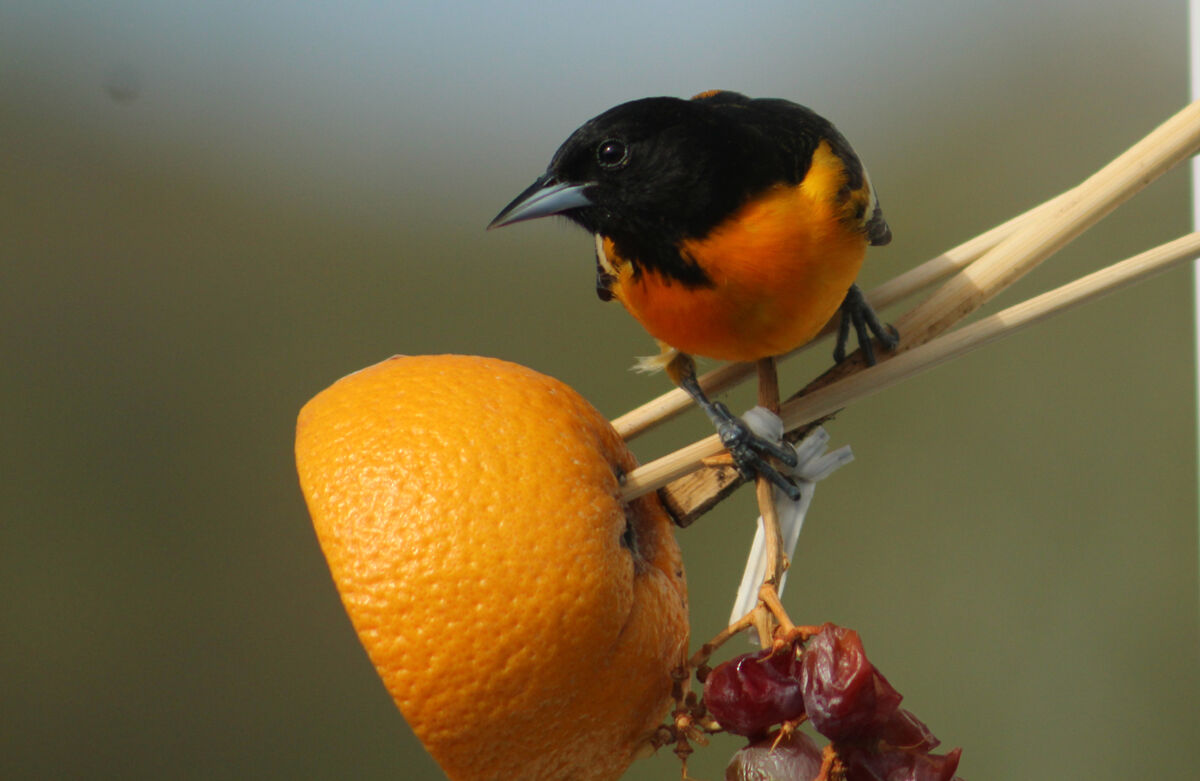 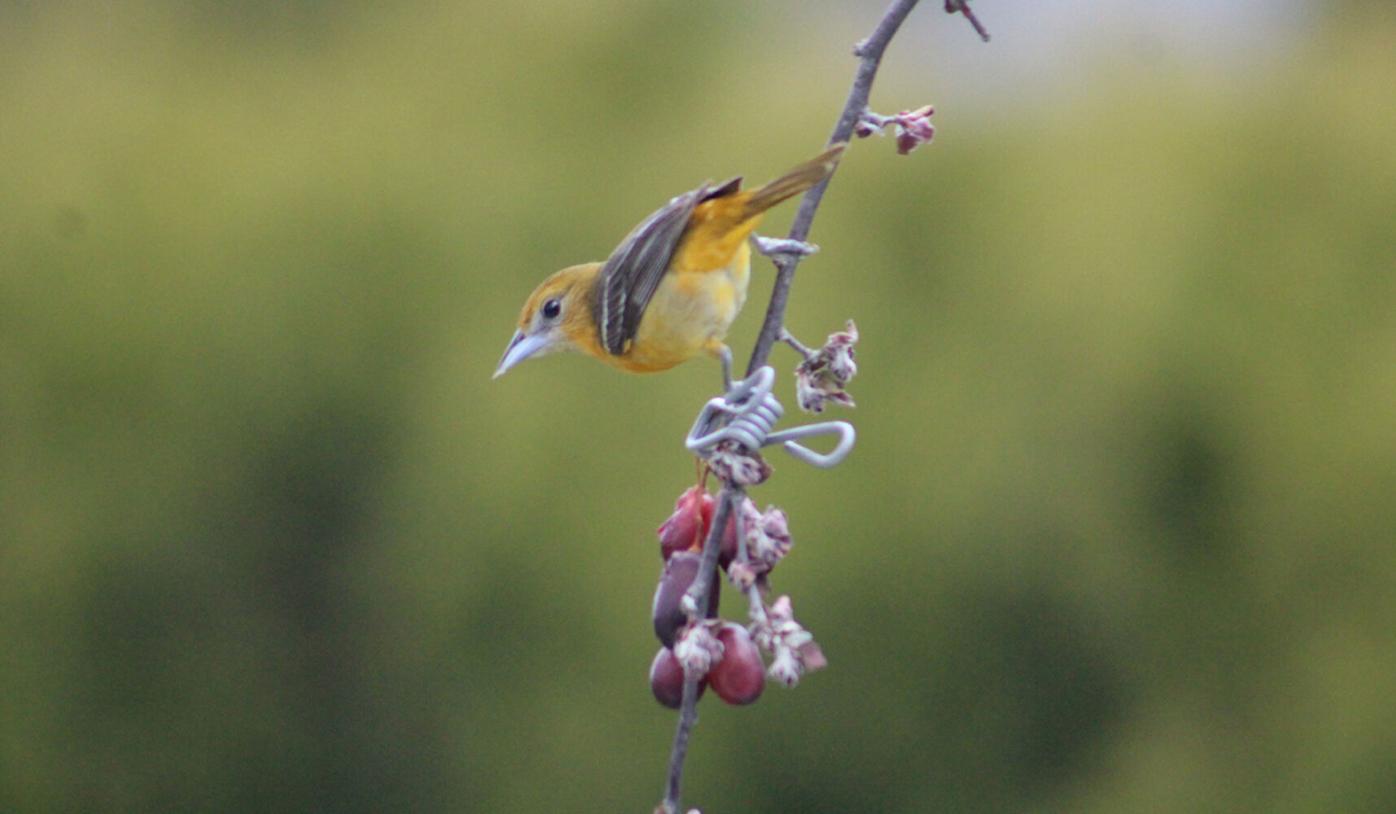 Q: You mentioned oranges, cut in half, attracting orioles, maybe last year. I have one coming from time to time and also another bird of similar size, but of different but similar colors and without the blackhead. Could it be a misfit?

A:I don’t know much about misfit orioles, suggesting it is either an immature or more likely a female Baltimore oriole.

Q: You always mention monarch butterflies and milkweed. We have a strange one because it has not gone to any of the milkweeds we have, but are visiting several other flowers. The milkweed is budded, and maybe when they open, it will change its mind and visit them.

A: I often connect monarch with milkweed because it is a life-and-death connection. It is not the milkweed flower that is as important as are its leaves. Milkweed leaves provide food for its caterpillars, and without the leaves, the caterpillars would starve, hence no offspring. Like other pollinators, the monarch will feast on the flower’s nectar. Many flowers attract this and other butterflies including cone flowers, marigolds, sunflowers, daisies, asters, coreopsis, verbenas and many others. Another thought is that the monarch is a male!

Q: There is a bird similar to woodpeckers, but instead of drumming on trees is drilling holes in a straight line around a tree in our yard. I don’t know what the tree is, but if it keeps up it might kill it. Right? What can I do?

A: There is no doubt about it, the bird is a yellow-bellied sapsucker.

Sapsuckers are the woodpeckers that drill even rows of holes, sometimes as many as 30, around the trunks and branches of trees. This is done to collect sap, which the birds lap with a specialized tongue ending in bristles. Sometimes the sap ferments and the birds drink it and become intoxicated and can be observed not flying very well. Or, as I observed, unable to land properly.

Maybe more importantly, the sap attracts insects that get caught in the ever-so-slightly sticky liquid. The birds return frequently to harvest the captured insects or catch those insects that are feeding on the liquid.

The yellow-bellied sapsucker once was primarily considered a migrant in this region, as noted in Ralph Hoffmann's 1908 "Birds of New England and New York," "In the Canadian Zone, the sapsucker is a common summer resident; elsewhere in New England and New York it is a migrant, passing north in April, and returning in late September and early October." In recent years, it has become a more familiar nesting species. In the 1994 and 1999 editions of Bartlett Hendricks' "Birds of Berkshire County," we read, "Sapsuckers are most likely to be seen in April, and in September and October, but have been found with young on Mount Greylock, in North Adams, Hancock and Sheffield." Today, they nest in the valleys, as well as mountains, and are considered regular breeders as well as migrants

Many of us hear a steady tap-tap-tap and recognize it as the tapping of a woodpecker. The yellow-bellied sapsucker (a kind of woodpecker) taps, but not steadily; it taps out its message of love and availability in code like fashion. The adult male is a handsome bird with a crimson crown and throat, edged with black, wings and back are black speckled with white with a broad white stripe from shoulder along edge of wing. The upper breast is black, and yes, the belly is yellowish. The female is similar, but has a white throat.

And yes, they will destroy favored trees, such as a mountain ash in our yard when we lived in Dalton. I have noticed some sapsucker drilling in our crab apple tree here in Pittsfield, but have never caught it in the act.

On July 6, I saw a monarch butterfly in the Pittsfield State Forest, in the overgrown field near the corner of Hancock Road and Churchill Street. There are some milkweed plants there. I may have more milkweed plants in my yard, but haven’t seen any monarchs here. During June, there was a Baltimore oriole drinking from the hummingbird feeder frequently. He was going through almost half a cup of sugar water a day, much more than the hummingbirds.

Mystery disease is killing birds in some states, and Mass. is taking precautions to slow the spread

A mystery disease sweeping the parts of the country that can cause neurological damage and death.

Q I I always read your column. I haven’t written with a question for some years, but I saw something I’ve never seen before. On June 29, I wen…