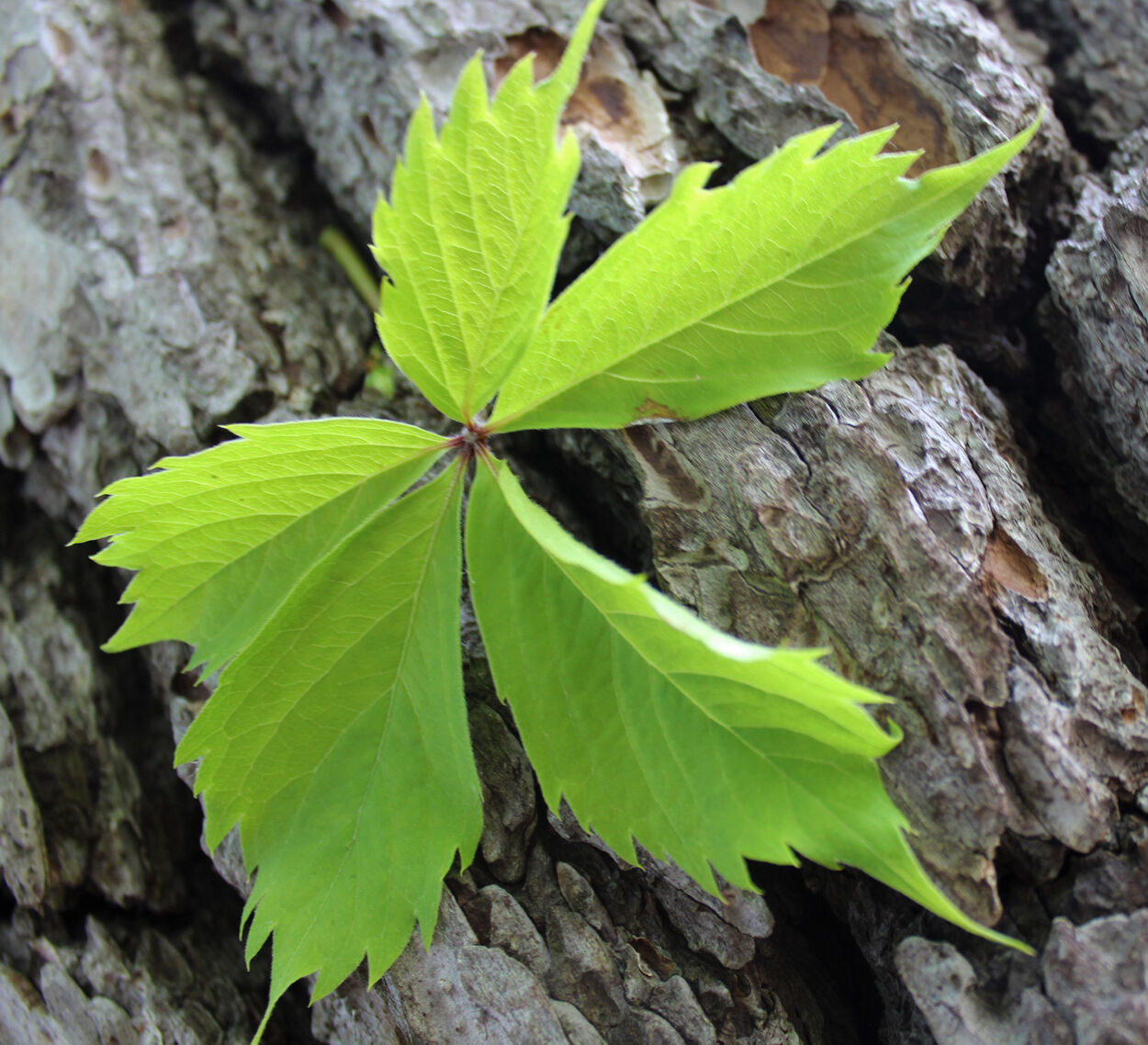 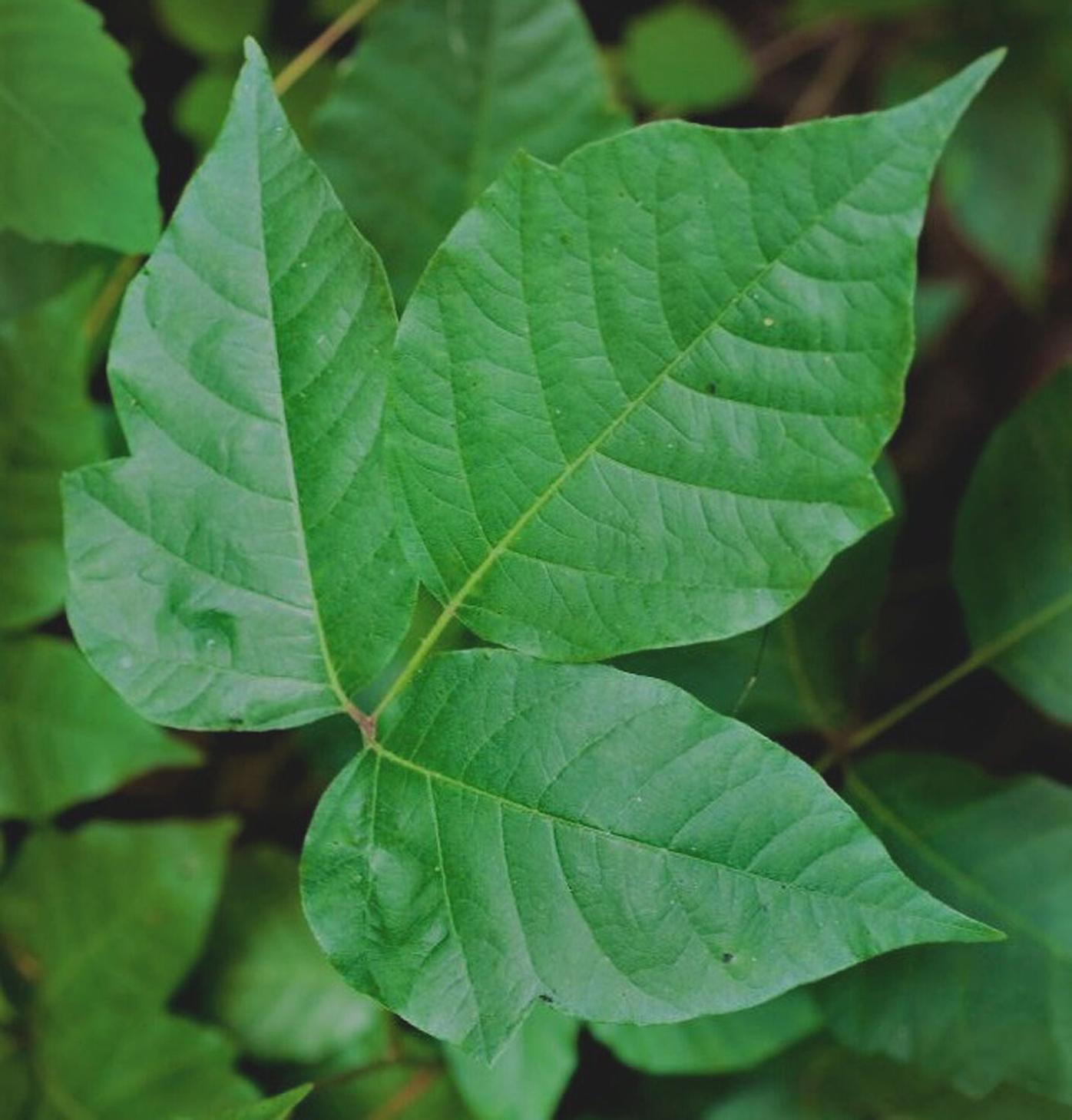 Q I just listened to a podcast about poison ivy and learned that Massachusetts has a five-leaf variety. Who knew?! Because I live near the state forest, I went to see if we had any and was dismayed to find it’s everywhere!

What can you tell us about this variety? Is it more or less toxic than the traditional three-leaf variety, and can it grow to be climbing vines or even shrubbery? Educate us unsuspecting nature walkers!

A We have two varieties of poison ivy in Berkshire County. Both have “three leaves,” the climbing variety (Rhus radicans) and the low-to-the-ground variety (Rhus radicans var. rydbergii). The climbing type is common only in southernmost towns in the Berkshires, and this climber, often with thick woody stems and aerial roots that cling to trees, is common along roadsides, dry fields, swamps and along paths in woods. (According to the University of Massachusetts, poison ivy can grow in either wet or dry soil, shade or direct sunlight.)

I think that the plant/vine you are seeing in our local State Forest in Pittsfield, and Central and Northern Berkshire, is Virginia creeper (Parthenocissus quinquefolia), a five-leaf ivy common along roadsides, hedgerows, open woods and the borders of streams. I do not know of any “poison” or reaction from touching this plant.

Many plants have five leaves or leaflets, which does not mean they are poison ivy, just as every three-leaved plant you encounter is poison ivy. I am not aware of any Rhus radicans variety with five leaves, but there are various plants with that number of leaves emerging from stems that might fill the bill.

Mrs. William Starr Dana (Frances Theodora Parsons) first published “How to Know the Wild Flowers” in 1893. With illustrations by Marion Satterlee and (in first edition) Elsie Louise Shaw. My edition, printed in 1904, is beautifully illustrated with drawings and colored prints, with informational text often embellished as early nature authors often did.

Poison ivy is among the worst of all weeds, sneaking into gardens, yards and woodlots. Anyone susceptible to this plant’s rash, often accompanied by an incredible itch, should learn how to recognize both varieties and be on the lookout for them when outside. (I have never reacted to contact with this plant.)

Q When can we expect the monarch butterfly to arrive in central Berkshire County? Will there enough food for the young? You were right on the mark with the arrival of the tiny hummingbird.

A One was sighted in Deerfield on May 25. So, almost any time here in The Berkshires!

Readers can let NatureWatch know, as they did the ruby-throated hummingbird. I will list the first eight in an upcoming column.

All three milkweed species, common, swamp and butterfly weed, are ready to provide food to any caterpillars right now, although it probably will be well into June or even late June before they will be hatching.

Q What else can I feed orioles? The orange slices I put out go black kind of fast.

A You can hang orange halves in the shade, and they will last longer. Another lure for orioles (and some say tanagers) is grape jelly (organic is best) in an orange or purple plastic saucer or cup fastened to a branch or hanging platform. Best to secure a roof to protect from sun and rain.

Correction: The photo of the junco nesting in a moss-decorated birdhouse hanging 80 inches above the ground in Otis was taken by Bob Rosen, Diane Saunders’ husband.

“The nest site is almost always on the ground, well hidden under overhanging grass, under log, rock, or exposed roots, or in shallow hole in dirt bank.” — Audubon.org/field-guide/bird/dark-eyed-junco

Several Naturewatch readers have contacted me about the loud, prolonged trilling coming from suspected nearby trees without finding the cause.…

In this week's NatureWatch, columnist Thom Smith answers a reader's question about the birds taking up residence in bird houses intended for bluebirds.

Thom Smith: 'Beyond Extinction' is an intimate look at the ocean

Rarely do I come across a volume with the aspects of both a coffee table book with both lavish illustrations, well-placed full-page photograph…