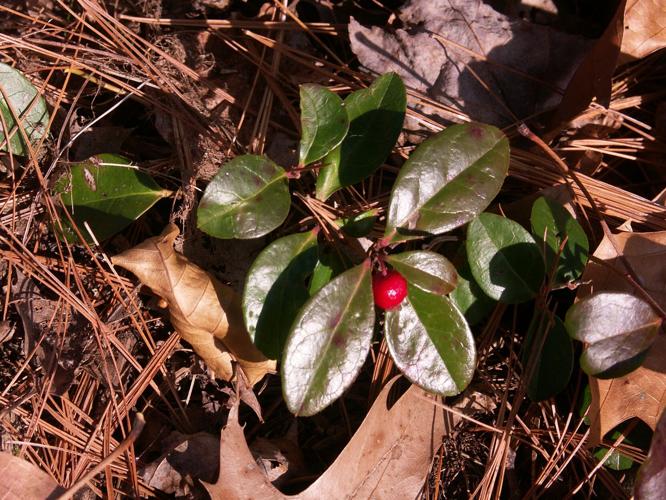 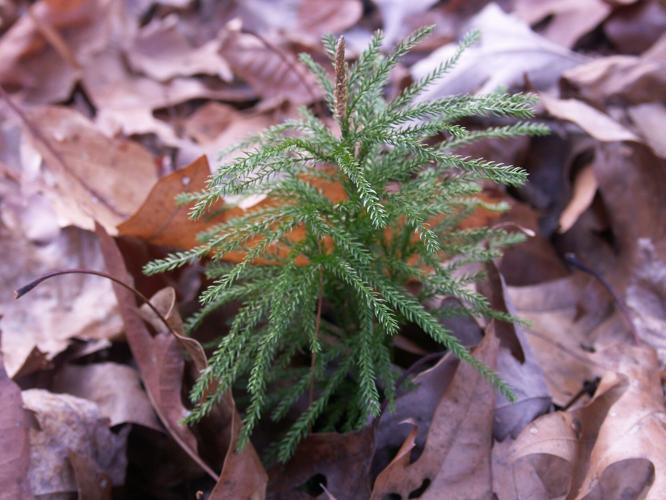 First, let me wish all my readers for a Happy Holiday from my family to yours!

Q:  We have been walking out in the woods like lower levels of October Mountain that we can get to with roads closed, Balance Rock State Park in Pittsfield State Forest, and Springside Park. When we are in deep woods and forested places, we almost constantly encounter plants that are green all winter. Can you give me a few names of the more common ones that we can learn about? I don’t know of any books, but the internet might also help if we have some names.

A: The woods are quiet. And until snow cover is deep, the fallen leaves now yellow and brown, and highlights the occasional green. This is a favorite time of mine to wander the Berkshire woods with the hardy evergreens to cheer me along — before the snow piles too deeply.

The killing frosts have put to rest most of the forest greenery, except for the brave and resilient plants that retain colorful leaves throughout the year. In moist woods, some ground vegetation is still vigorous and ignores the freeze. Christmas, polypody and evergreen wood ferns, shining club moss, princess pine and everyone’s favorite, the diminutive creeping vine we call partridgeberry, checkerberry or teaberry, remain unyielding to winter. At higher altitudes, mountain laurel often forms impenetrable thickets of shiny green leaves. American yew, also called ground hemlock, is another low growing evergreen that often catches my attention. Many of these evergreen plants grow beneath open stands of pine, hemlock and spruce trees, also evergreen, that facilitate one of the more popular traditions at this season – the Christmas tree.

Some of my familiar evergreen friends before deep snow covers them are:

Partridgeberry or squawberry is a common woodland plant that grows vine-like, close to the ground, and seems to especially enjoy the company of white pine and moist woods. In summer, it grows twin flowers that make one bright red fruit favored by grouse and mice. If not eaten the fruit may last a year on the vine, making it an ideal choice for a small “berry bowl.”

Wintergreen or checkerberry often prefers cool, shaded woodlands, sometimes among evergreens. Nibble part of the leaf and learn why it is so named (weaker flavor in winter, though). It often has only one red berry if the deer haven’t gotten them.

Princess pine, running ground pine, club moss or Christmas green are all common names for this slow growing woodland groundcover, once harvested to excess for wreath making. A better alternative is white-pine boughs with pinecones. Although diminutive today, 300 to 410 million years ago, club mosses attained the size of trees and contributed to the formation of coal deposits. Somewhat resembles large, magnified moss.

Shining club moss, a small upright growing woodland plant, has no flower but retains its cheerful green through the snowy winter months. It grows so slowly it should only be harvested prudently, if at all.

Evergreen wood fern and Christmas fern are unlike most other ferns that are sensitive to frost. These two remain green throughout the winter and, along with shrubs like holly and rhododendron, make attractive landscape additions when planted in shady places. Another evergreen fern that in some places covers boulders is the polypody fern.

Q: I have been meaning to ask you about how many birds are extinct in the U.S.? I know of the passenger pigeon and wonder about the ivory-billed woodpecker. There must be more.

A: Let’s list those birds that are extinct in North America. There are additional extinct species in addition to the two you mention: labrador duck, last seen in Elmira, N.Y., 1878; heath hen, last seen on Martha’s Vineyard, 1931; great auk, last pair killed in Newfoundland, 1844; Carolina parakeet, last seen in the wild in 1910, declared extinct in 1939 some 20 years after the last captive pair died at the Cincinnati Zoo; Bachman’s warbler, last seen in South Carolina, 1962, but not declared extinct until Sept. 2021; and the dusky seaside sparrow, last seen in Florida in 1987, it was declared extinct in 1990. The Eskimo curlew, last spotted in Texas in in 1962, is considered to be extinct but remains on the critically endangered list.  (Of the two you mention, the last passenger pigeon was shot in 1901 with the last known in captivity, Martha, dies in 1914. The ivory-billed woodpecker was last seen in Louisiana, mid-1950s, and in Cuba, 1987. It was reportedly rediscovered in eastern Arkansas in 2004, but has not been seen again. It was officially declared extinct by U.S. Fish and Wildlife in September.)

While we are on the subject, let us investigate a variety of species not yet extinct but close: mass.gov/2020-marks-30-years-of-the-massachusetts-endangered-species-act

Tommy, of Stockbridge, wrote: “For a few months I have not seen any goldfinches and just recently I have been seeing a few, maybe four to six at a time at our bird feeder.”

A lack of cedar waxwings has left winterberry bushes loaded with fruit. Are these birds missing or just eating something else?

NatureWatch readers were quick to respond to another reader's question about the lack of cedar waxwings in his yard and if anyone else has seen them:

Liana T., of Sandisfield, wrote: "A handful of cedar waxwings came back briefly this morning for the few berries left on the lower branches of the hawthorne, [and] Dec. 19, I had a lot of cedar waxwings devouring my hawthorn berries in November. Within two weeks, the tree went from being magnificently dense with berries to mostly nude. If I parked my car in the wrong spot, it would get covered in red bird poop. Country living!”

William P., of North Adams,wrote: “Not many, say half dozen were in a bush in our side yard. We watched them outside our dining room for two days and they ate every berry there. No idea the name of the bush.”

Mary S., of Pittsfield, wrote: "A big flock, I would say 40 or 50 birds worked at eating in three red berry shrubs in our backyard. They ate a good number, and with them were some robins. After a couple days they left, leaving enough for another flock.”

Tom F., of Lenox, (apparently a lover of Copper Beech and trees in general) following The Naturewatch story about Gail’s Tree on Nov. 20, 2021, wrote: “I grew up on the Elm Court estate, and the coppers there were always great for climbing. Have you ever seen a weeping copper? There is one across from Frommel Court on Old Stockbridge Road and another one is across from The Church on The Hill at the Stonewall Inn."

Are we supposed to be seeing red-winged blackbirds or song sparrows in the Berkshires during the winter?

Wondering why you're seeing certain species of birds stay longer than normal? Thom Smith tackles the topic on birds lingering longer in the Berkshires.