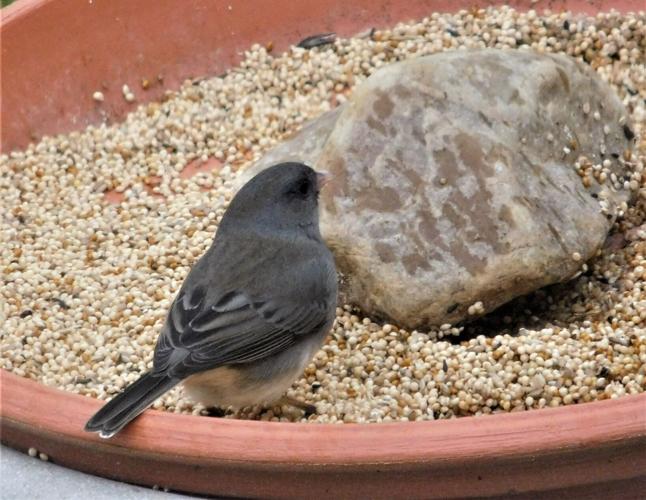 A dark-eyed junco dines on mixed seed in a large flower pot tray. 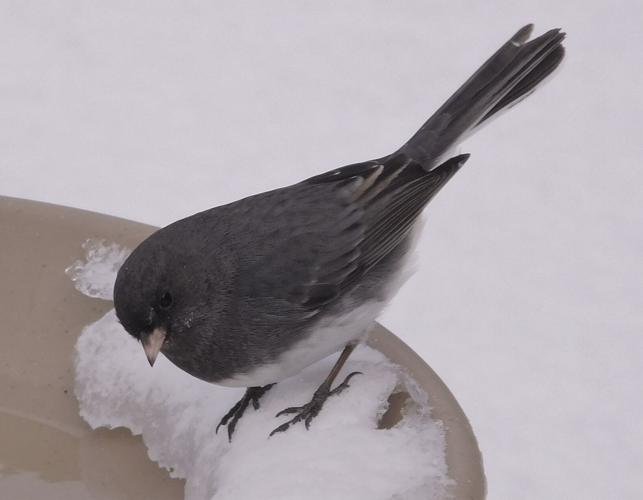 A dark-eyed junco drinks from a heated birdbath.

A dark-eyed junco dines on mixed seed in a large flower pot tray.

A dark-eyed junco drinks from a heated birdbath.

It appears to me at least, that the snowbirds are arriving earlier every year.

Last year, 2020, on Oct. 18, with a heavy frost the snowbirds arrived in our yard. The year prior, 2019, they arrived on Oct. 15. This year the snowbirds, aka a dark-eyed junco (once known as the slate-colored junco) surprised my wife, Susan, who brought them to my attention on Oct. 9! These birds were mostly on the ground where the feeders, both hanging and ground, provide a variety of food. But that food had not yet been even purchased. We live just shy of the top of Crane Avenue in Pittsfield, and later that day two feeders were stocked. Usually I keep a small hanging feeder stocked with millet for chipping sparrows during the chipping sparrow season (Mid-April through mid-October). It keeps them from following me into the garage for a handout, ever since I spilled mixed seed on the floor several years ago and was not fastidious in cleaning it up.

In a few early bird books that I have gathered through the years, “snowbird” is often used to name this unlikely member of the sparrow family whose colors, with a few exceptions, promote shades of brown. We know the snowbird as predominantly gray and white, or as my first copy, "Peterson’s A Field Guide to The Birds," purchased in 1960 explains “…dark slate-gray with a hood and conspicuous white outer tail-feathers; belly white.”

A rather dull way to explain such a widespread friendly species when Frank M. Chapman, who was named Curator of Birds at the American Museum of Natural History and wrote numerous scientific papers as well as twenty-five books and major reports, wrote a far more colorful explanation in 1929's "What Bird is That?": “Gray skies and snow-covered earth are the Junco colors, and when he flashes them along the hedgerows and wood borders we know that it is only late September, winter will soon be with us.” Chapman also came up with the original idea for The Audubon Christmas Bird Count, now known across The United States and Canada.

Like most other birds, their habits vary, and the junco is no different. In 1950, "Berkshire Birds" author Bartlett Hendricks wrote, “The slate-colored Junco are uncommon but regular winter residents in the southern [Berkshire] valley, but are scarce in Pittsfield, even in mild winters, and are missing from the highlands.” Things have changed, even the bird’s name. Today, they are common, if not plentiful at local feeders in Pittsfield and elsewhere throughout the valley towns of the Berkshires. In David P. St. James’ "Annotated List of The Birds Of Berkshire County Massachusetts", we read that in 2001 in the South Berkshire Christmas Bird Count 872 were recorded.

“There is not an individual in the Union who does not know the little snow-bird,” declared John James Audubon, writing about the dark-eyed junco almost 200 years ago.

I first saw the snowbird on April 12, 1958 (probably during migration) with the late Avah W. Sanborn, then director of Pleasant Valley Sanctuary in Lenox, who told me that it was a slate-colored junco, a name that I still used until the late 1990s. It was only in the mid-1960s that Norman Budnitz, then a Pittsfield High School student who I would go birding with, told me one day his mother’s housekeeper saw a snowbird and it meant, so she said, snow was coming. Many people in the United States today still think of this familiar songbird as the “snowbird,”

Today, the junco we call snowbird is common throughout western Massachusetts, but due to climate changes continuing to warm our region and elsewhere, of course, nearly all of Berkshire County will lose its junco population in the future.

Our junco is for the most part a ground species, one that hops and runs, stopping to scratch for seeds, so I have learned to scatter seed beneath our Arborvitae to shelter it from snowfall. Although in recent years they have learned (probably by seeing other species feeding at hanging feeders) to join them. I think it was only three years ago that I first saw them at our feeders. Now it is commonplace, especially if it contains either black-oil sunflower hearts (hulled) and millet, with millet being the favorite, although I think there might not be long before the sunflower heart becomes equal. I have read that in the wild they feed on 75 percent of the year eating seeds, and then ripe lamb’s quarters, chickweed, and sorrel make up a good portion. They also feed on insects during breeding time and feed them to their young.

It is fun to watch these birds hop along the ground either on snow or grass! Like other sparrows they will also stop and scratch the leaf-litter for both insects as well as seeds. And as primarily ground foragers they will still prefer a low to the ground feeder, when available, or simply scattered on the ground. I have in the past made a shelter feeder out of two pieces of used plywood that worked fine and is a simple project to involve the children or grandchildren.

Two different readers have sent me photographs of moss- covered bird houses (ornamental) being used by juncos for nesting! And while the moss may resemble more a natural nesting sight, it remains surprising.

Several times while walking along the summit of Mount Greylock, I have found junco nests, even though on the ground the nests are well hidden under branches, logs, rocks and roots.

Thom Smith: What is this brilliant red berry bush?

In this week's NatureWatch, columnist Thom Smith answers your questions about winterberry; smaller birds "mobbing" larger ones, and when the "snow birds" are expected to arrive.

No, birdfeeders do not prevent songbirds from migrating south.

A lovely October afternoon allowed the gathering of well over 50 of Gail Pinna's family members and friends on the open lawn across from Sugar Hill Assisted Living Community for the Dalton's Historical Commission dedication of the lone "Crane House Purple Beech" as "Gail's Tree."

Expensive bird feeders are not required to attract songbirds to your yard. All you need is good quality seed

We need not live at the edge of meadow or wood to have an interesting bird life visit, and expensive bird feeders are not required to entice a variety of fascinating songbirds to our yards.