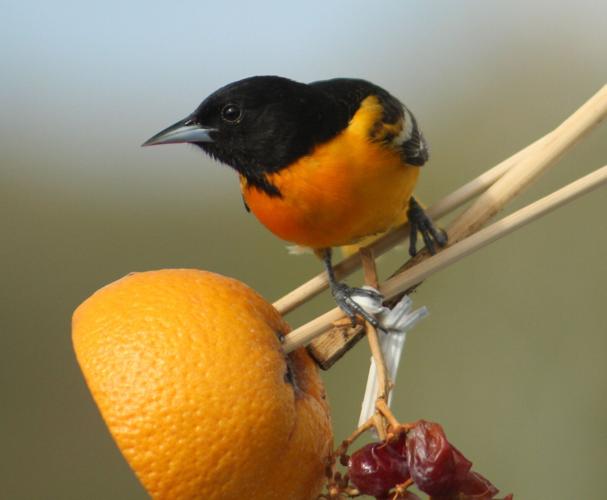 There are a variety of foods you can offer orioles. Thom Smith has had success with cut-up oranges. 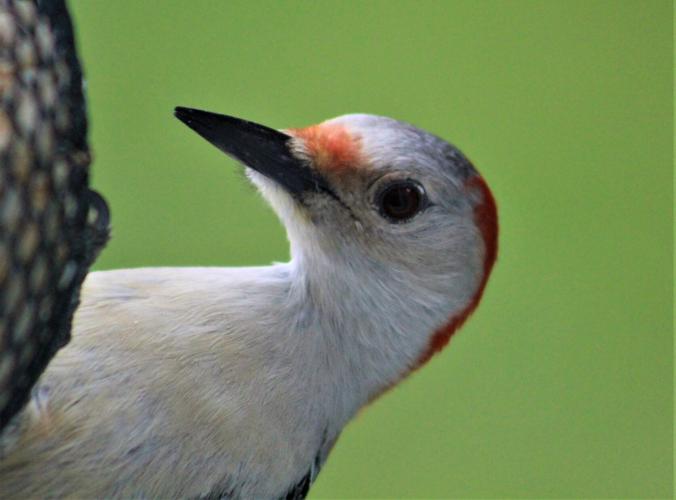 The Berkshires has nine different species of woodpecker. The red-bellied woodpecker, seen here, is among the common species found in the area. 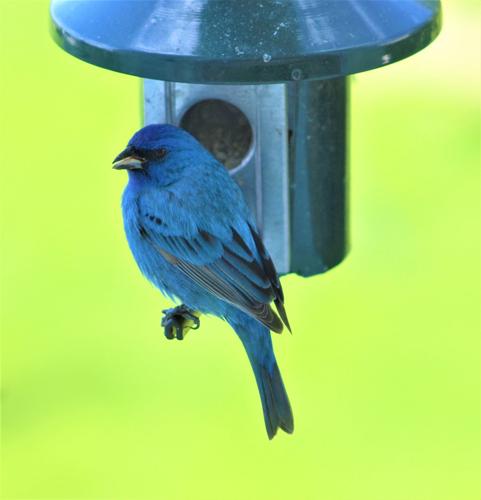 The indigo bunting is more common than you may suspect because we are apt to not notice them: Bright sunlight is required to see the indigo color.

Q: A friend told me that besides hummingbirds you can attract Baltimore orioles. What do you suggest, my friend thought oranges? Is this true?

A. There are a variety of foods you can offer orioles, and I have had success with cut-up oranges. Although I have never tried the following, they may work: I have read peaches, berries and bananas, grape jelly, suet mixed with bits of berries, and nectar (offered at some stores that supply feeders) or sugar water similar to a hummingbird concoction in an enlarged hummer feeder or a special oriole feeder. I prefer the oranges so I don’t attract yellow jackets.

Q: I saw a very large [woodpecker] in a dead tree while playing golf in Pittsfield this spring. It was digging a large hole in the tree and leaving wood chips all over the ground. Also, can you tell me about the large black and red digging into the dead tree? Also, how many woodpeckers are found in Berkshire County?

Woodpeckers aren't shy or quiet when looking for a mate. They'll bang on anything to attract one

A: The pileated woodpecker was the large black bird with the red crest on both the male and female, and don’t forget the white stripe on both sides. This is the largest woodpecker in species that I know of in the east and south through Florida and west towards even into parts of Texas. It also extends from eastern Canada south through the east with an expanded range westward through much of Canada. It is the loudest of woodpecker with a yucka, yucka, yucka call similar to the flicker. It digs nests into both live mature deciduous-coniferous woodlands and also dead trees. And some people condemn this species for killing live trees when it is gathering one of their primary foods, carpenter ants, but the ants have already infested and will eventually kill the tree. They also eat beetles, termites, spruce budworms, various caterpillars, and even grasshoppers. They will eat different fruits and berries and are known to visit bird feeders. The first one I found at a suet feeder was in our backyard when I was about 15 years old. This species is helpful in providing nest holes for other birds, including sometimes even bats that may use an abandoned pileated nest.

As for the number of woodpeckers, there are nine different woodpeckers, some of which are so rare that few have ever seen them. The rare ones, and I have never seen them, include, American three-toed, blacked back.

A very rare breeder and migrant is the red-headed.

And the common species are red-bellied, downy, hairy, and yellow-bellied sapsucker, northern flicker, and of course, the pileated.

Q: I saw a brilliant rich blue bird eating bird seed mix seed at our feeder on May 15. I looked through the bird book and believe it was an indigo bunting. Are they rare? I have never seen one before.

A: The indigo bunting is more common than you may suspect because we are apt to not notice them: Bright sunlight is required to see the indigo color. According to Cornell Labs' allaboutbirds.org, “Like all other blue birds, Indigo Buntings lack blue pigment. Their jewel-like color comes instead from microscopic structures in the feathers that refract and reflect blue light, much like the airborne particles that cause the sky to look blue. Bunting plumage does contain the pigment melanin, whose dull brown-black hue you can see if you hold a blue feather up so the light comes from behind it, instead of toward it.”

They arrive in The Berkshires in early May and have been seen at bird feeders preferring small seeds, but you may see them on a sunny afternoon foraging for dandelion seeds, and later in the season thistle seeds. They also go for berries and a variety of insects including small caterpillars.

Q: Have you heard of those crazy earthworms this spring? I think I had a few last summer but have seen nothing yet.

A: I have not received any comments from Naturewatch readers yet. (Your question should bring attention though.)

This week, Thom Smith offers up a trick to keep house sparrows out of bluebird boxes and offers advice on cleaning bird feeders and ridding yards of garlic mustard.