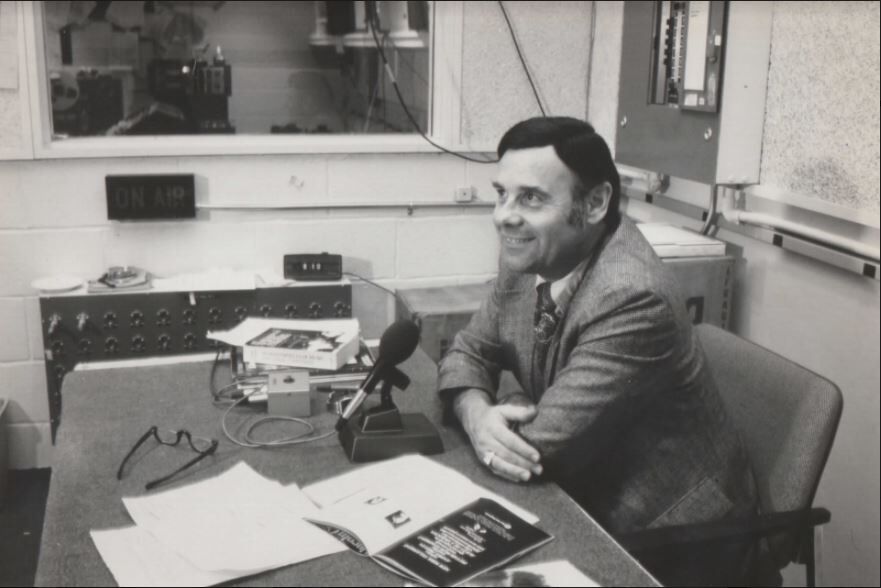 Bookspan, here in 1979 in the broadcast booth, says he got inspiration for his defining radio voice from professional sports broadcasters. 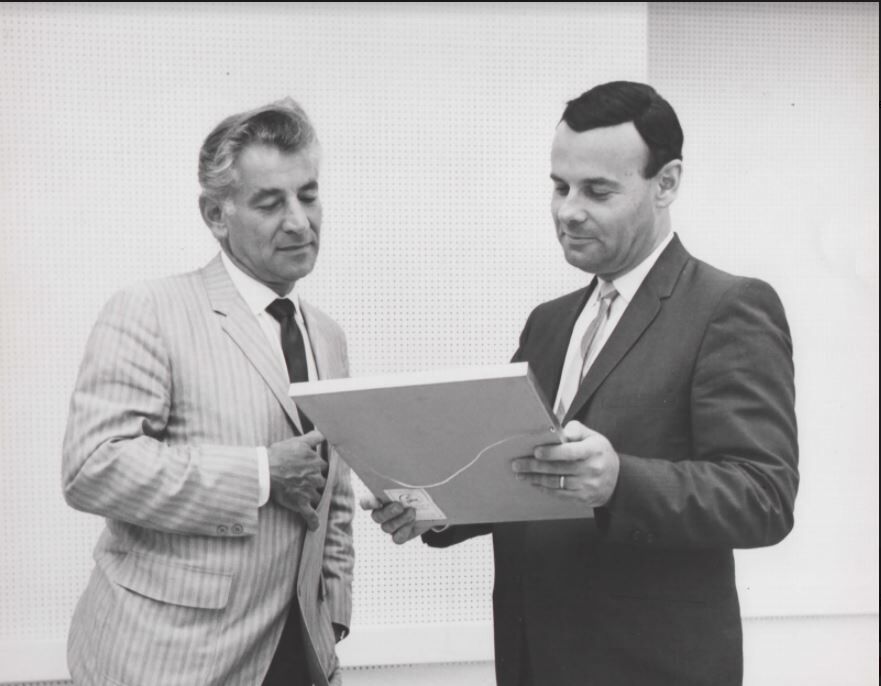 Bookspan, right, pictured here in 1966 with Leonard Bernstein. The pair became lifelong friends after competing against each in a competition sponsored by The Boston Herald and the Boston Pops. 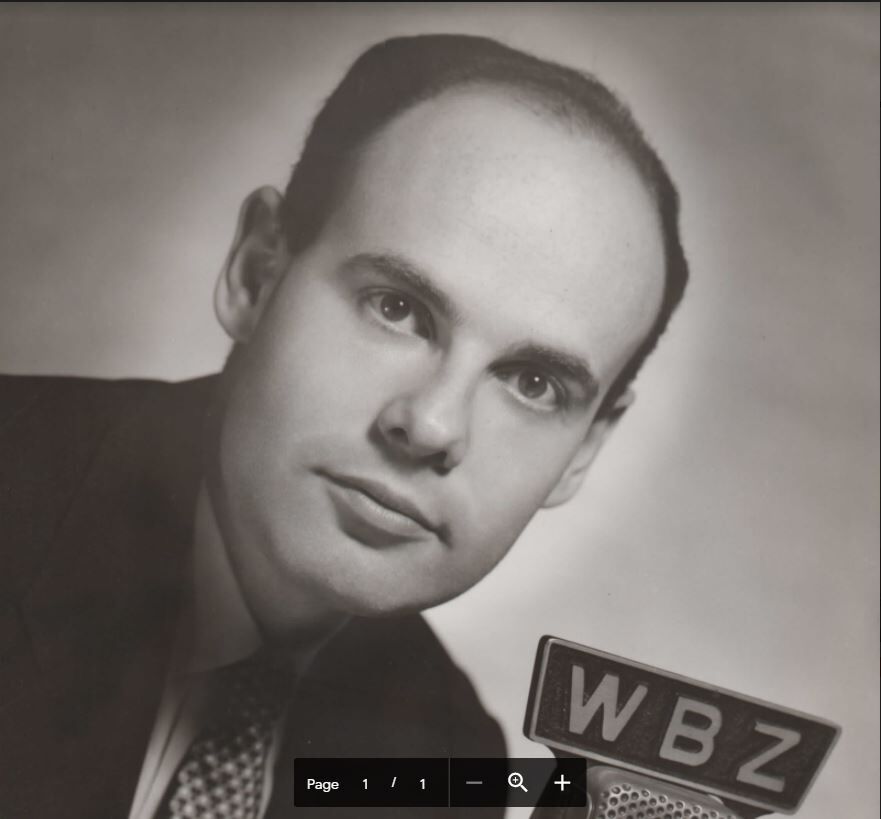 Martin Bookspan was the voice of Tanglewood, of the PBS series “Live from Lincoln Center,” of Boston’s famed WBMS and New York’s WQXR, among other outlets. 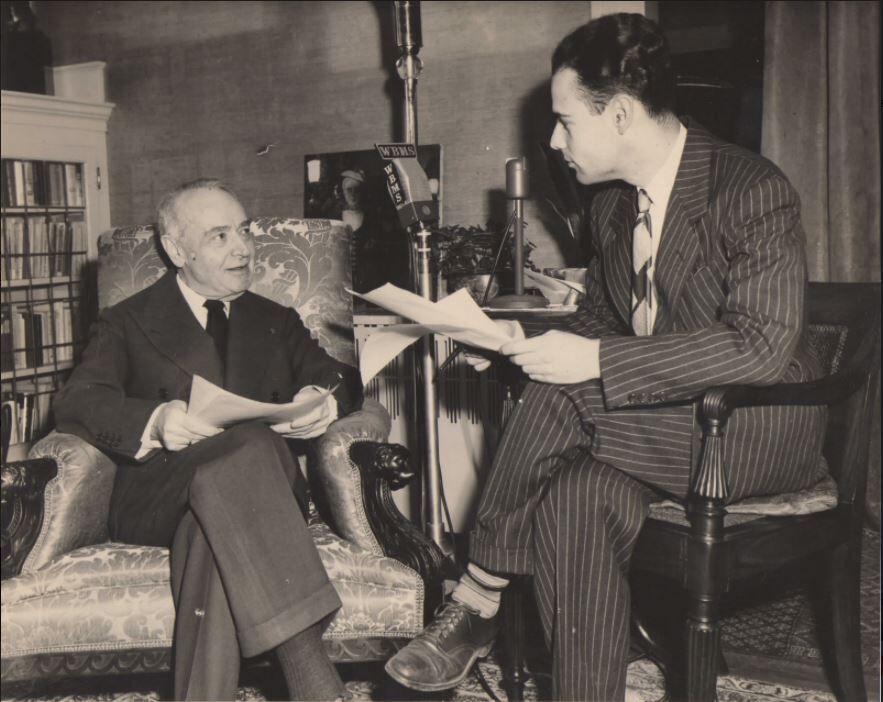 Bookspan, here in 1979 in the broadcast booth, says he got inspiration for his defining radio voice from professional sports broadcasters.

Bookspan, right, pictured here in 1966 with Leonard Bernstein. The pair became lifelong friends after competing against each in a competition sponsored by The Boston Herald and the Boston Pops.

Martin Bookspan was the voice of Tanglewood, of the PBS series “Live from Lincoln Center,” of Boston’s famed WBMS and New York’s WQXR, among other outlets.

Known by millions of melophiles who tuned their radio knobs toward humanity’s greater endeavors during the second half of the 20th century, his was the voice of Tanglewood, of the PBS series “Live from Lincoln Center,” of Boston’s famed WBMS and New York’s WQXR, among other outlets.

Now in his 15th year of retirement, Bookspan, 95, and his famous voice are quite willing to have a phone chat, to fill the dead air in the culture wrought by COVID-19. That’s his domain — filling dead air.

The man has stories to tell.

“Do you know about the time Rudolf Serkin broke the lyre?” he inquired, speaking in his distinctive timbre from his now full-time home in Aventura, Fla.

“Then I did the one thing that I learned I should never do again: I left my broadcast booth,” Bookspan recalls.

From high above Boston’s Symphony Hall, he climbed down the two flights backstage to discuss a matter with composer Aaron Copland. But in the midst of conversation, when Symphony Hall should have been resonating with Serkin’s stormy piano playing, Bookspan realized with a shudder that the hall had gone quiet.

From that point, it took 18-and-a-half minutes to fix the piano. With no script, no notes, Bookspan filled the time speaking about the BSO and Brahms, Munch and Brahms, Serkin and Brahms, French composers — “anything that came to mind.”

“The next day, it was the front page of The New York Times,” he says.

Born on July 26, 1926, and raised in the shadows of Symphony Hall, Bookspan was the only child of music-loving parents. His father, an insurance agent, had a particular devotion to Jewish liturgical music. The family’s most cherished material possession, an Atwater Kent radio, anointed Bookspan’s childhood with the transcendent sounds of the New York Philharmonic, the Metropolitan Opera, and the Philadelphia Orchestra, among others.

“It opened up a world for me,” Bookspan says.

Then, one day, when he was 6 and home from school with the sniffles, he heard a knocking on the door. A man was selling music lessons. Hearing the man’s pitch, Bookspan said, “Ma, Ma, I want to play the violin!”

“This was during the depression,” he recalls. “It was a really difficult time, but somehow my parents managed to scrape together the 50 cents a week that the lessons cost.”

In 1938, at age 11, he heard the BSO live for the first time, at Symphony Hall. But it was his first exposure to renowned BSO Music Director Serge Koussevitzky in 1940 that set him “ablaze.”

“His performance of Tchaikovsky’s 4th Symphony lives with me to this day," Bookspan says.

He took two things from that experience. The first: He would never be good enough to make it as a career as a violinist. The second: “I knew I simply had to have a life in music, if I could,” he says.

Around that same time, he earned an honorable mention in a Musiquiz competition sponsored by The Boston Herald and the Boston Pops held at the Boston Garden. The co-winner was an up-and-coming young composer seven years his senior by the name of Leonard Bernstein. The two struck up what would become a lifelong friendship.

His associations with musical giants had only just begun. At age 18, a student at Harvard by then, Bookspan sought to secure a place for himself on the college radio station. He attended a lecture series by Aaron Copeland and afterward summoned the courage to ask the celebrated composer and conductor if he’d be willing to be interviewed.

Yes, his first radio experience was interviewing Aaron Copland. At one point, Bookspan asked, “Mr. Copland, what are you working on now?”

“Well,” Copland responded, “Martha Graham has asked me to compose a score for a ballet that she’s working on, and I accepted.”

“To the best of my knowledge,” Bookspan says today, “that was the first public reference to what became ‘Appalachian Spring.’”

Even before graduating from Harvard (with a major in German literature), Bookspan had been named music director for Boston’s WBMS. A career that would span six decades had begun.

With a dynamic voice, centuries of music history in his head and a craftsman’s attention to detail, Bookspan would eventually be scooped up by WQXR, the nation’s leading classical station. He became a frequent contributor to NPR. He was host and commentator for the live broadcasts of the BSO, Boston Pops, and New York Philharmonic. He served as commentator for PBS’ “Live from Lincoln Center” telecasts. He authored books. He penned New York Times’ columns. He served as symphonic and concert activities coordinator for ASCAP.

He hosted the weekly “This Week at Tanglewood” series. Indeed, from 1947 to 2019, he had spent all but three summers at his home in Stockbridge.

Along the way, he fell madly in love with a singer named Janet. They met on a blind date in 1954 and married a few months later. Janet died in 2008. Their three children — Rachel, David and Debbie — still have homes in the Berkshires.

Bookspan, who suffered a stroke two years ago, apologizes for his voice, which he says is “a shadow of what it used to be.”

Today, he loves listening to old classical performances unearthed through YouTube that had never been released as commercial recordings.

He feels blessed to have had on-air conversations with more than 800 musical luminaries.

He’s pleased to share the inspiration that eventually made him the defining voice of classical music in the United States: professional sportscasters.

“Growing up in Boston, I was an ardent Red Sox fan,” he says. “What I wanted to accomplish was to make music the kind of exciting experience that going to the Red Sox game provided. I wanted what I was saying to be colorful, to be communicative and to be contagious. Hey — how about that: Three C’s!”

When asked about his favorite performance, he doesn’t hesitate. It was in the late 1940s, early 1950s: Bernstein conducting the BSO at Symphony Hall.

“Mahler’s Second Symphony,” he says. “It hit me like an earthquake. I had to go to a jazz club afterwards just to shake some of it loose.”