Martha Ann Sturtevant and Mary Abbe Pierce, of Savoy, became known as the "oldest twins in New England" upon turning 90 on March 28, 1934. The women, who still lived in the family homestead where they were born, had unknowingly held the title since 1929. 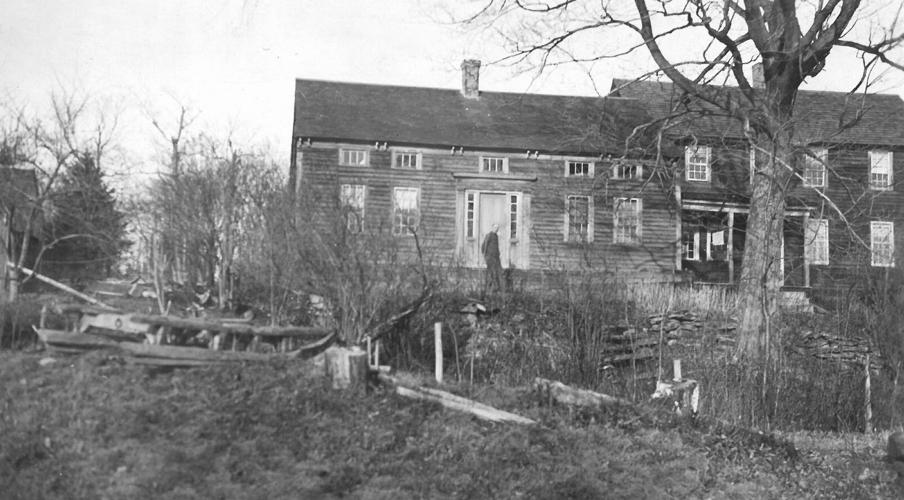 Mary Abbe Pierce and Martha Ann Sturtevant, celebrated their 90th birthday in the Pierce Homestead, on Harrington Road in Savoy, The "oldest twins in New England" were born in the house, built by their maternal grandfather. Their nephew, Everett Sturtevant, 75, their caretaker, stands outside the front door.

Martha Ann Sturtevant and Mary Abbe Pierce, of Savoy, became known as the "oldest twins in New England" upon turning 90 on March 28, 1934. The women, who still lived in the family homestead where they were born, had unknowingly held the title since 1929.

Mary Abbe Pierce and Martha Ann Sturtevant, celebrated their 90th birthday in the Pierce Homestead, on Harrington Road in Savoy, The "oldest twins in New England" were born in the house, built by their maternal grandfather. Their nephew, Everett Sturtevant, 75, their caretaker, stands outside the front door.

SAVOY — Only a few things could separate the Pierce twins — a broken shoulder, a marriage and death.

The marriage, at age 28, separated the sisters for six years. Mary Abbe Pierce remained at the family homestead on Pierce Hill. Martha Ann, now a Sturtevant, lived less than a mile and a half down the road. The sisters saw each other daily. When Martha Ann's husband, Edward, a Civil War veteran died from a chronic heart condition, she moved back home to live with her sister.

The broken shoulder kept the twins, then 83, apart for six weeks. Mary Abbe, who slipped on the ice while feeding their chickens, recuperated at the W.B. Plunkett Hospital in Adams. Her sister visited her daily.

Mary Abbe and Martha Anne, who held the title of "oldest twins in New England" from January 1929 until August 1934, spent the majority of their 90 years together, living in the house in which they were born. The Pierce Homestead, as the family home was known, was built in 1830 by their maternal grandfather, Noah Staples, for Elder Phillip Pierce, once pastor of the First Baptist church and their paternal grandfather, who also owned their 300-acre farm.

The sisters, beloved members of the town and the oldest members of its First Baptist Church, were feted with cards of congratulations and best wishes in March 1933, when it was learned the pair, were in fact, the oldest twins in New England. Just a few months earlier, in January, papers across the nation erroneously declared 85-year-old twins Alfie Godfrey, of Hampton, N.H., and Junie Noyes, of Waltham as the oldest. The Pierces were 89 that March, just a few months older than Sara Libby and Hittie McKeon, of Lincoln, Maine, who in 1926 had been awarded the title, also erroneously.

The coveted title, in fact had belonged to twins Elmira Adams and Eliza Spencer, of Stoneham, who held the title from 1925 until the time of their deaths, at the age of 90 and less than 24 hours apart on Jan. 17 and 18, 1929. It was then, unbeknownst to the Pierce twins, that they became the oldest twins in New England.

Upon learning of their title in 1933, the sisters, poised to celebrate their 89th birthdays, welcomed reporters into the home, which they shared with their nephew and caretaker, Everett Sturtevant. Everett, 73, had been living with sisters for 63 years at that point, taking care of the farm chores and looking after his aunts.

The aunts, who wore matching button-up polka dot dresses, aprons and laced up boots for the photographers who visited them, were still self-sufficient, both The Eagle and North Adams Transcript reported. Martha Anne tended to the cooking and Mary Abbe took care of the sewing. Both could read and sew without the aid of glasses, the papers reported. Their nephew reportedly walked the half-mile to the general store, daily, to pick up the newspaper.

"A radio gives the only modern touch to the 104-years-old homestead ... There is no phone, no electric lights nor steam heat and they take great satisfaction in running their household as they have for many years, undisturbed by 'new fangled things,'" The Berkshire Eagle reported.

The sisters, who reportedly enjoyed the attention, were not typical news fodder. The pair rarely made it into the paper, except for social items, reporting they and their nephew had traveled to Hawley to visit cousins. The exceptions to the rule were a small news item about a trip to Pittsfield in 1930, their first visit to the city in 50 years, and an article announcing their 88th birthday party had been postponed due to a snowstorm.

In March 1934, the Pierce twins "observed their 90th birthdays in a simple manner appropriate to the quiet life they have led in the hilltown."

The festivities included reading the numerous cards and postcards from people they did not know, including greetings from Noyes and Godfrey. They also heard a greeting on the "Cheerio Hour" on the radio.

Born on March 28, 1844, the Pierce twins, as they were known, were the youngest children of Stillman and Eunice (Staples) Pierce. Their brother, Samuel, was born in 1835, followed by their sister, Nancy Jane, in 1838. The Pierce family was among the early settlers of Savoy. Philip Pierce and his wife, Chloe, arrived from Rehoboth around 1810 to take over as pastor of the First Baptist Church. In 1817, the Pierces left the church.

Like many of their hilltown neighbors, the Pierces were homesteaders — self-sufficient farmers and homemakers who raised and made what they needed; sold what they did not. Many farmers on Savoy Mountain raised cattle and sheep; a few grew potatoes as well.

Homesteaders/farmers produced maple syrup, as well as spruce oil that was sold to pharmaceutical companies and hayed their fields (most hay was kept for their own animals, but some sold it to others). Some homesteaders supplemented their incomes by "ferning," picking ferns that were sold to nurseries and florists.

The Pierce twins, the papers reported, enjoyed "recalling the days when the town had a population of more than 1,000 and when there was 'more going on' than in recent years."

Savoy, in fact, had been a bustling town during their youth. The town, in 1850, boasted its largest population and was deemed one of the most prosperous in North Berkshire. It had two Baptist churches, as well as Methodist, Adventist and Congregationalist societies. Savoy had also been home to a Shaker community for a time and had been the temporary residence of the "New Light," a revivalist ministry. In 1885, the town had over 1,000 resident, 150 farms and 16 saw mills, as well as a tannery, grist mills and a thriving logging industry. The town also had several school houses serving the children of its various villages — The Brier, Spruce Corner, New State, Savoy Center, The Tannery, Savoy Hollow.

On their 90th birthday, Martha Ann and Mary Abbe were not only the oldest twins in New England; they were also the oldest native residents of Savoy. Longevity was not exclusive to Martha Ann and Mary Abbe alone — both the Staples and Pierce families had members who lived well into their 80s and 90s. Their mother, Eunice, lived to the age of 96. Her parents, Noah Staples and Abigail Eddy Staples, live to ages of 86 and 90. Stillman Pierce, the twins' father, was 78 when he died from heart disease; his parents, Phillip and Chloe, both lived to be 82 years old. The twins' older brother, Samuel, lived to be 86. Their sister, Nancy Jane Sturtevant (Everett's mother) was the only one Stillman and Eunice Pierce's children not to live beyond the age of 30, dying from consumption (tuberculosis) in 1868.

Six months after their 90th birthday, the Pierce twins would be separated again, but this time, there would be no daily visits with each other. On Aug. 5, 1934, Mary Abbe died from chronic myocarditis (inflammation of the heart) and chronic nephritis (inflammation of the kidneys). She was buried at Tomb Cemetery with the rest of the Pierce family. Some 18 months later, on Feb. 15, 1936, a headline in the North Adams Transcript announced: Famous Savoy Twins Are Again United by Death. Martha Ann had died, at the age of 91, just a few months shy of her 92nd birthday. Her death followed a short bout with bronchopneumonia.

"The death of her sister had decided effects on Mrs. Sturtevant and she missed her companionship to an unusual extant," the paper reported.

Martha Ann was buried next to Mary Abbe in Savoy's Tomb Cemetery, where they share a headstone that reads: The Pierce Twins.

Everett Sturtevant would carry on the family tradition of long life. In 1938, after nearly 70 years at the Pierce Homestead on Harrington Road, he retired from farming and moved to Hawley, where he resided with Roy Hunt, a cousin. He remained in good health, taking daily walks and exercising until 1954, when a fall fractured his hip. A year later, on Oct. 1, 1955, Everett died at the Richardson Rest Home in North Adams. He was 95.

Sources: The Berkshire Eagle, The North Adams Transcript, The Hartford Courant, and "Taking the High Road: A Two Hundred Year History of a Hilltown" by Jane Benedict Phinney.

The Oldest Twins in New England

The title of "Oldest Twins in New England" was an informal title, typically bestowed upon twins by newspapers. The coveted moniker was passed on following the death of one of the twins.

With no central database, newspapers sometimes declared a set of twins the oldest, only to learn that an older set of twins was the title holder. The following list is compiled from newspapers available on Newspapers.com. Discrepancies, when noticed, are noted.

The list contains "the oldest twins" as declared in newspapers across New England.

1887: Hepsibah Everett and Sally Cole, 90, of Dedham, Mass. **Named "the oldest" after contesting claims that Martha Chickering, of Worcester, and Mary C. Woodward, of Nashua, N.H., 87, were the oldest twins.

1903: Susan French Totman and Cyrus French Bryant, of Maine, 85 **The Hungerford bothers were both alive

1909: Ruth and Dorothy Reynolds, of Burlington, Vt., 81 **Coughey brothers are both alive.

1921: Theodore and Frederick Knapp, of South Boston, 74 (The Pierce twins are 77. The Knapps were the oldest of 311 sets of twins responding to a call by a Boston theater following the death of Frank Tyrell.)

(**Sara Libby and Hittite McKeon, of Lincoln, Maine, 82, are incorrectly declared the oldest by the Boston Globe. The Pierce twins are 4 months older that Libby and McKeon.)

1929: Elmira Adams and Eliza Spencer die within 24 hours of each other. The Pierce twins, Mary Abbe and Martha Ann, become the oldest twins in New England. The do not learn of this distinction for 4 years.